16 2016 June
33
"Among the gracious lilies beyond the sea, Christ is born,
With his blood, with his body, the world around is transfigured
On the Cross for us He died - for Freedom we will die,
Once God keeps step here. ”
("The Battle Hymn of the Republic")

Last time, in the material on mortars, the story was told about how the Confederate fort, which had the funny name Pillow (“Pillow”), surrendered to the northerners after bombardment of 330-mm mortars mounted on armored rafts. And, by the way, it is not at all surprising that he gave up. Well, and he was named that way, by the way, was not just like that, but by the name of his builder, brigadier general Gideon Pillow, at the very beginning of the war. He was at a distance of 40 miles (64 km) north of Memphis, that is, guarded the approaches to it, but with the fall of the island number 10 4 June defenders of the fort, so that they are not cut off from the rest of the army, left the fort. Northerners occupied Fort Pillow on June 6 and used it to defend the approaches along the river to Memphis. 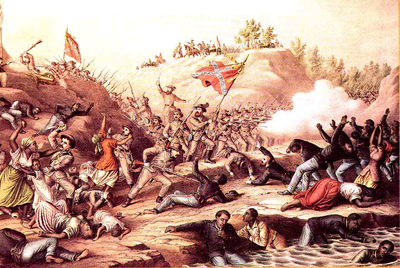 Massacre at Fort Pillow. Color poster 1885, created to Americans did not forget about this event.

The fort stood on a high hill and was protected by three lines of trenches semicircle around it, with a protective parapet 4 feet (1,2 m) thick and from 6 to 8 feet (from 1,8 to 2,4 m) in height, surrounded by a moat. During the battles, it turned out that this “structure” was ill-conceived. Because of the large width of the parapet, the gunners of the fort's artillery guns could not shoot at the attackers as soon as they approached. 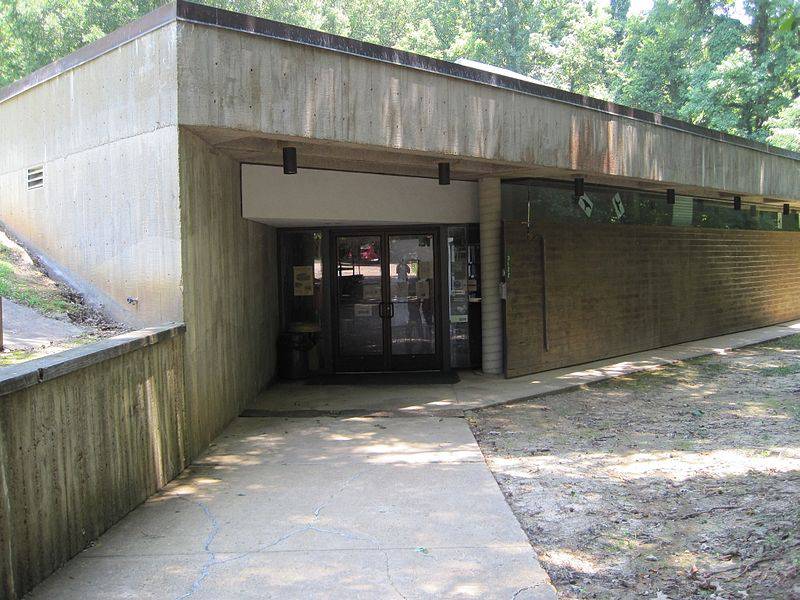 The building of the museum on the territory of Fort Pillow.

However, according to American military historian David George Eicher, Fort Pillow is famous not for these military details, but for the fact that one of the most severe and sad events of the American military is connected with it. stories. Interesting isn't it? What could be such a harsh event to talk about him like that? It turns out that he had every reason for this! 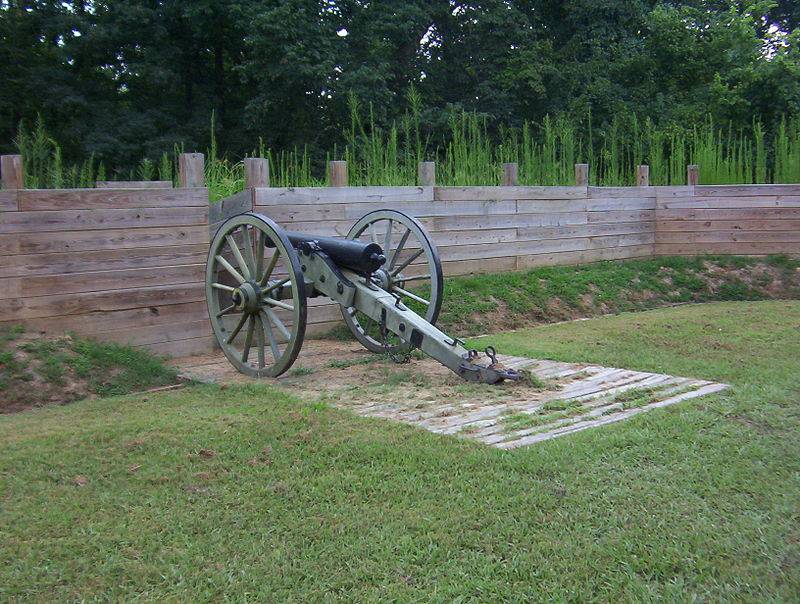 So Fort Pillow looks today from the inside.

It must be said here that the civil war in the United States was different from all other civil wars by the presence of a distinct racial accent in it. Moreover, the use of blacks as a Union soldier, in conjunction with Abraham Lincoln's decree on the release of slaves, very outraged the Confederation, outraged so much that the Confederates called this his act uncivilized. As early as May 1863, the Confederation passed a response law, according to which black American soldiers captured during the war with the Confederation should be considered as insurgents, and they should be tried in civilian courts with an automatic death penalty. It was argued that the Confederates should take adequate measures against blacks. Here, of course, banal envy also played its role. Indeed, with the stroke of a pen, Lincoln acquired thousands of brave and disciplined soldiers who ... fought just like white soldiers, but saved their lives, which was beneficial for the northerners in all respects, but the southerners could not afford this in principle. 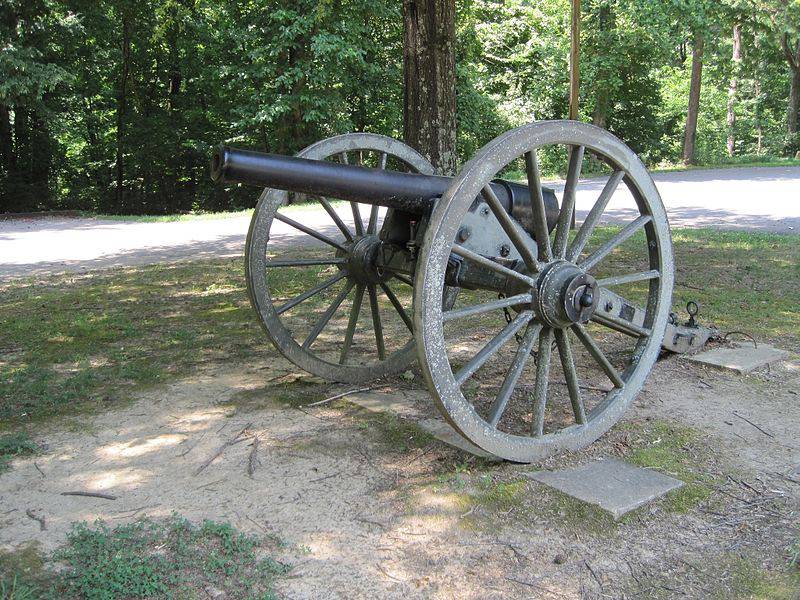 One of the old guns of Fort Pillow.

And then it was that 16 March 1864, Major General Southerner Nathan Bedford Forrest launched his famous monthly cavalry raid with 7000 cavalrymen across the territory of the states of West Tennessee and Kentucky. The purpose of the raid was to destroy the supply bases and break into Memphis. 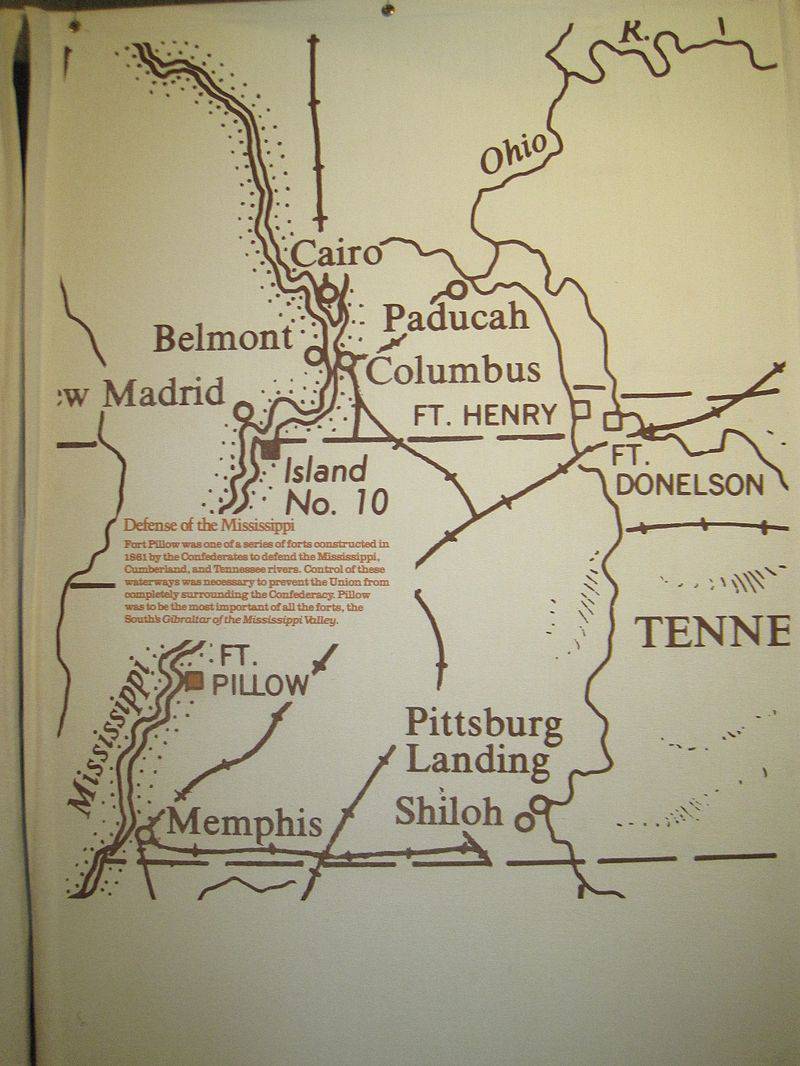 Map of the location of Fort Pillow on the Mississippi.

On his way stood the fort of Pillow, and he decided to capture him, using the fact that his garrison consisted of only 600 people. 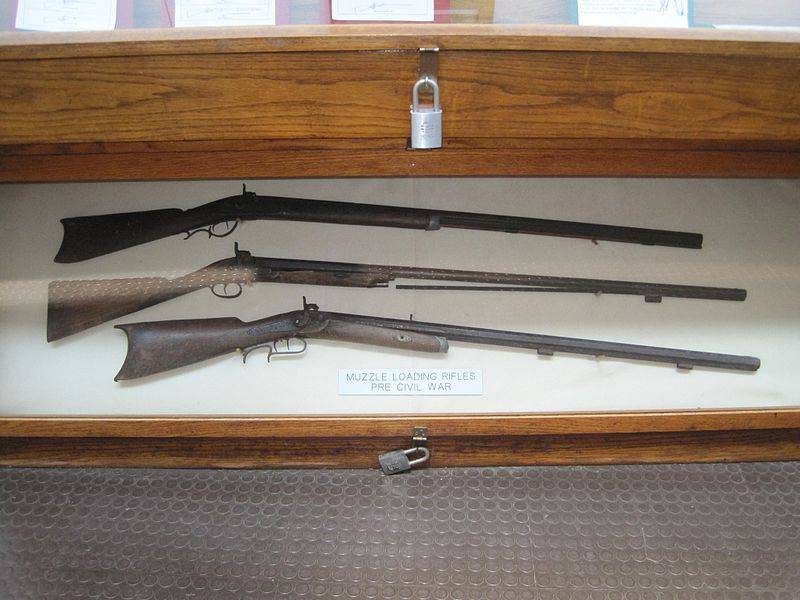 Rifles defenders of the fort in the exhibition of his museum.

Well, the “Pillow” garrison really consisted of approximately 600 soldiers, divided almost equally into black and white. Black soldiers were from the 6 Regiment of colored heavy artillery, and part of the soldiers from the Memphis Light Artillery Brigade, under the general command of Major Lionel F. Bout, who was only two weeks in the fort. Bout was supposed to transfer his regiment from Memphis to Fort Pillow 28 March, but did not have time to do so. The former slaves who served in his regiment understood very well what threatened them to find themselves in the hands of the Confederates, because according to the law adopted by the southerners they were not considered prisoners of war. They heard that the Confederates threatened to kill any blacks from the Union army whom they would meet. White soldiers were mostly recruits of the Tennessee 13 Cavalry Regiment, commanded by Major William F. Bradford. 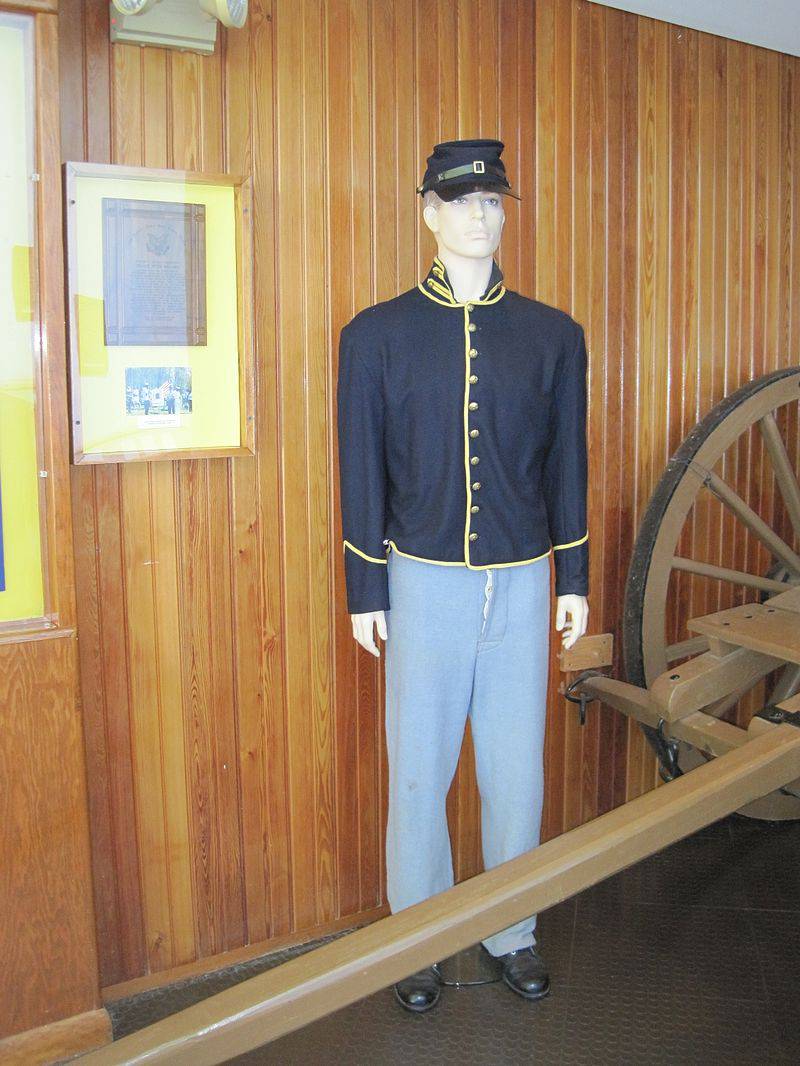 Forrest's cavalry approached the Pillow fort on April 12 in 10: 00. A stray bullet hit Forrest's horse, causing him to fall to the ground along with the horse and severely hurt himself. And it was only the first horse. And just under him that day they killed three horses (!), But he himself was not seriously injured. K 11: The 00 confederates seized two rows of barracks at a distance of 150 yards (140 m) from the southern tip of the fort. The northerner soldiers from the fort could not destroy them, and the Confederates took advantage of this and led aimed fire at the fort's garrison. 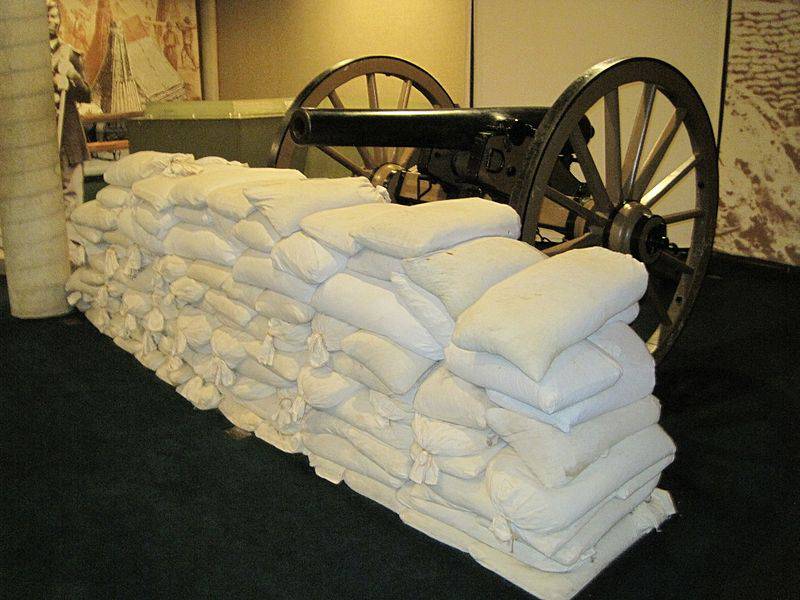 Another gun that defended Fort Pillow.

Southerners fired at the fort until 3: 30, after which Forrest sent Bedford a request to surrender: “I demand the unconditional surrender of the garrison and promise that you will be considered prisoners of war. My people have just received a fresh supply of ammunition, their position is very advantageous. If my request is rejected, I cannot be held responsible for the fate of the people entrusted to you. ” Bradford asked for an hour to think, but Forrest, fearing that he was waiting for help that would come to him by the river, answered that he only gave 20 minutes. Bedford replied that he did not intend to surrender, and Forrest ordered his troops to begin the assault. 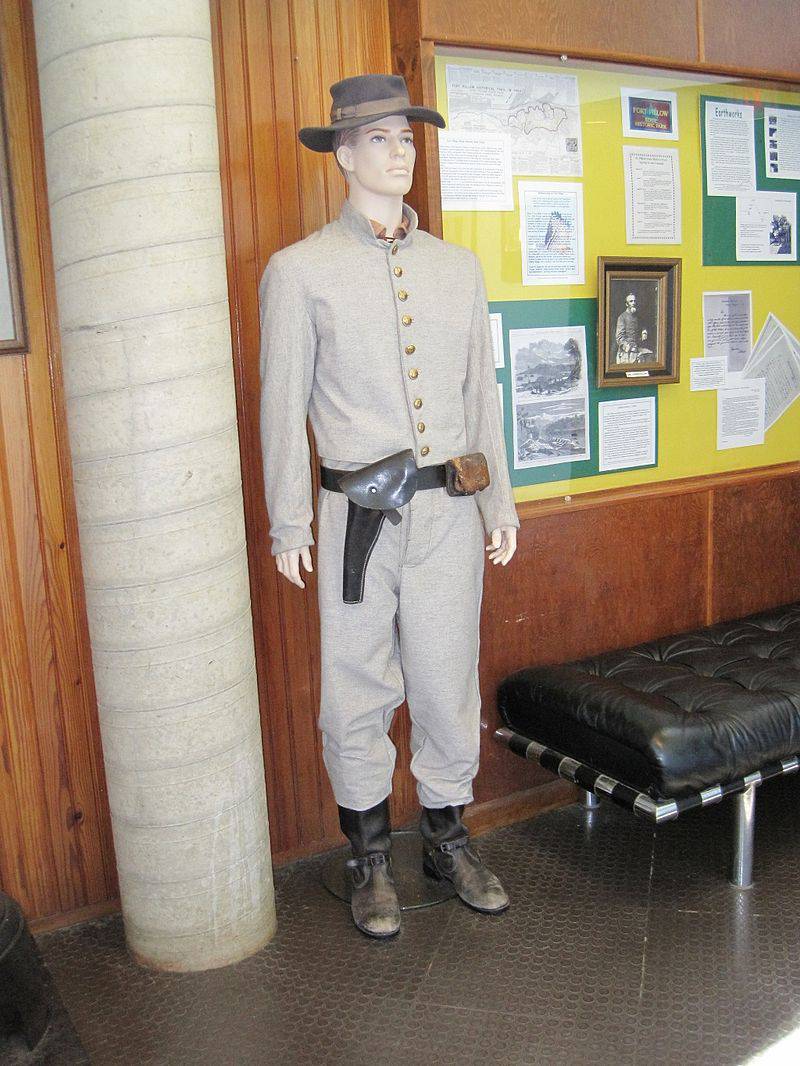 While the snipers were firing at the fort, the first wave of attackers descended into the moat and stopped there, while the soldiers of the second wave climbed up their backs, as if on steps. Having risen on a parapet, they rushed into bayonets, and after a short fierce fight, they threw the unionists away from the shaft and from the guns.

Later, the survivors of the garrison showed that most of them after that surrendered and abandoned weapon, but as soon as this happened, they were shot or stabbed by the attackers, who at the same time shouted: “No Quarter! There is no quarter! ”What this meant, but this: many negros, trying to escape, shouted that they were Quarterons and had never been slaves in the South. Recall Mine Reed's Quarter. Many of the Quarterns were indeed very similar to whites, but in the eyes of the southerners they continued to be slaves. Immediately after the Southerners left the fort, the “incident at Fort Pillow” was investigated by a special commission, which concluded that the Confederates had shot most of the garrison after it had surrendered. Historian Andrew Ward in 2005 also concluded that this atrocity against prisoners of war, including the killing of civilians at Fort Pillow, had certainly occurred, but that it was not authorized by the Southerners. 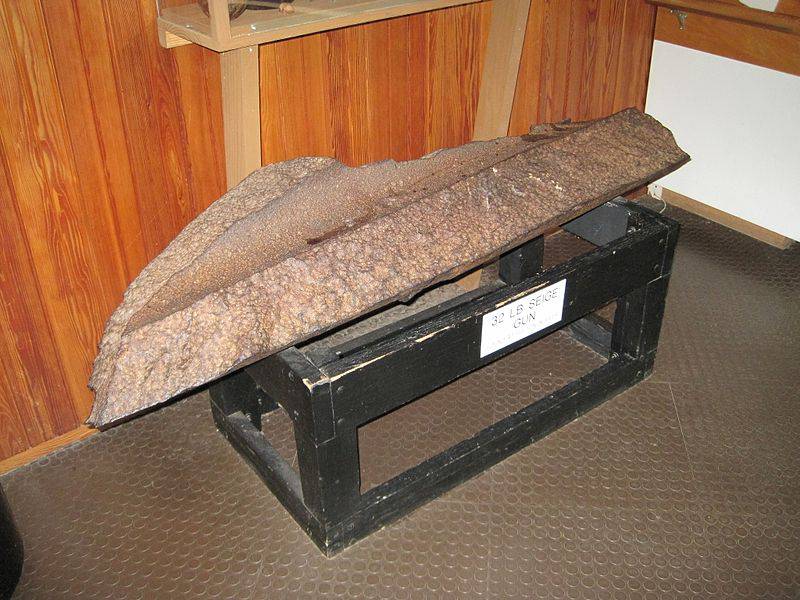 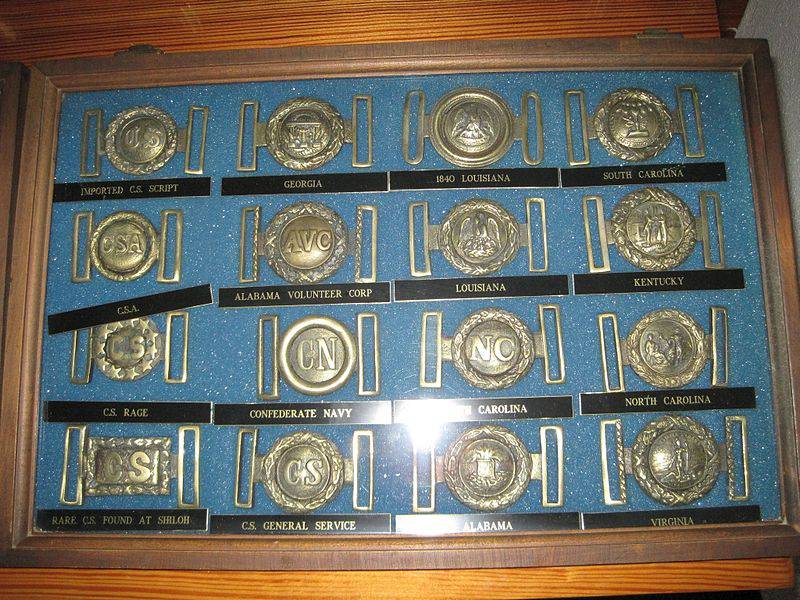 Belt buckles of soldiers of the southern states.

Confirmation that all this was just that, and not otherwise, was found in a letter to the home of one of the sergeants Forrest, sent shortly after the battle at Fort Pilush, which said that "poor, deceived negros fell to their knees, and with a raised hand, they begged for mercy, but, despite their pleas, they were all killed. ” True, the Southerners then insisted that the Union soldiers, even if they fled, held arms in their hands and often turned back and fired, so that the Confederates also had to shoot at them in self-defense. 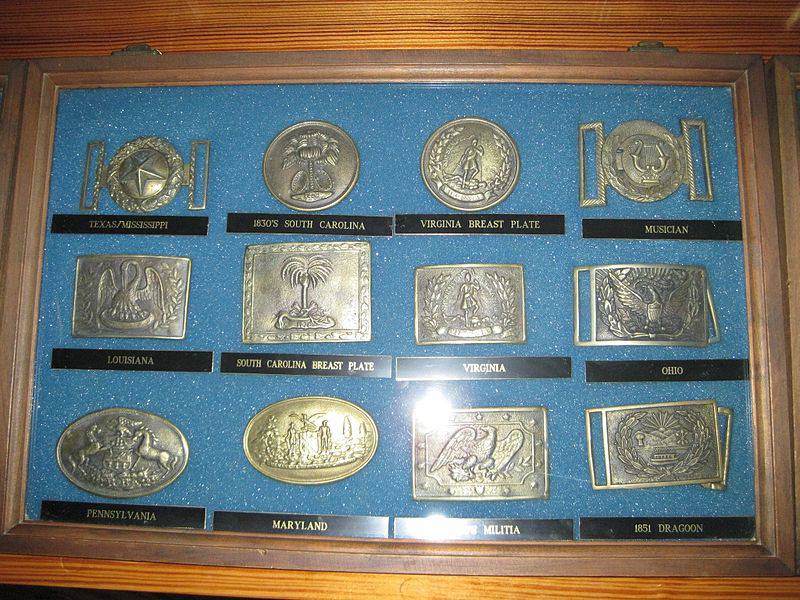 Belt and chest buckles of soldiers of the southern states.

Northerners, of course, did not even want to listen to anything like that. Their newspapers reported: "The attack of the southerners on the fort" Pillow ": the total extermination of its defenders. Shocking scenes of wildness! ” 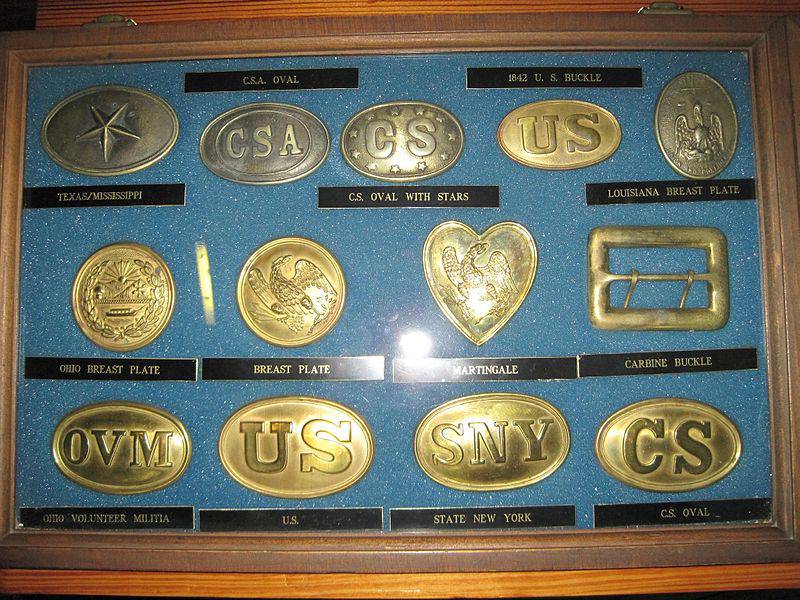 Belt buckles of soldiers of the northern states.

The newspaper "The New York Times" 24 of April reported: "The blacks and their officers were killed with bayonets and sabers in the most cold-blooded manner ... Of the four hundred Negro soldiers, only about twenty managed to survive! At least three hundred of them were villainally destroyed after the surrender! ”

General Ulysses Grant later wrote that on April 12 of 1864 at Fort Pillow there was a real massacre! In the 1908, the following statistics were presented on the northerners in this battle: 350 killed and mortally wounded, 60 injured of varying degrees of severity, 164 people were captured or missing, and 574 people from 600 defenders of the fort. There are other data, for example, that of the men in the 585 or 605 fort were killed from 277 to 297. Major Bradford was apparently among those executed after he surrendered. 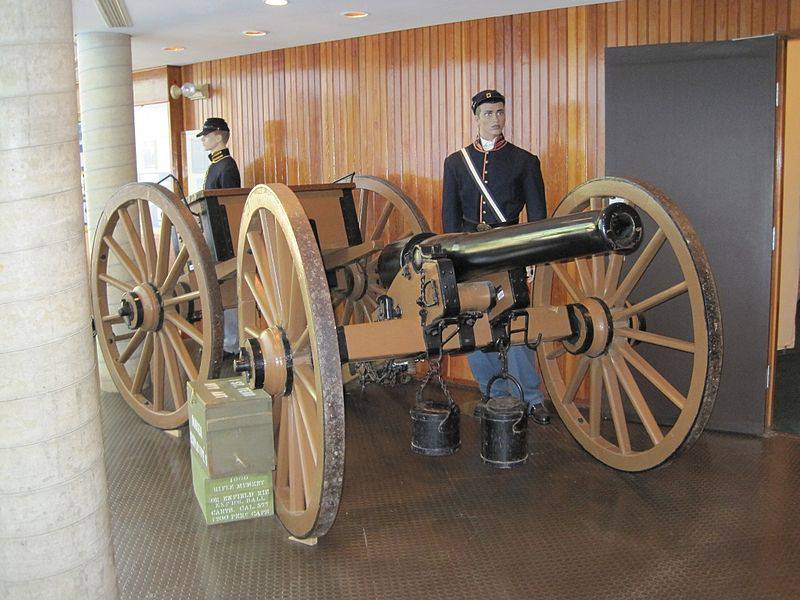 The breech weapon of the army of northerners.

What happened after that? But this: the Southerners left the fort that evening, since there was absolutely nothing to do there. Then, on April 17 of 1864, General Grant ordered General Benjamin F. Butler, who was negotiating to exchange prisoners with the Confederation, to demand that the black soldiers be treated properly, like the white. But Southerners rejected this demand, explaining that they would not change Negroes for their soldiers!

The latter, however, is not surprising, since even 30 July 1863, President Abraham Lincoln adopted the so-called “Act of retribution”, the essence of which was that for every soldier of the US Army killed in this war one of the captive rebels would be sent to penal servitude all the ensuing consequences! 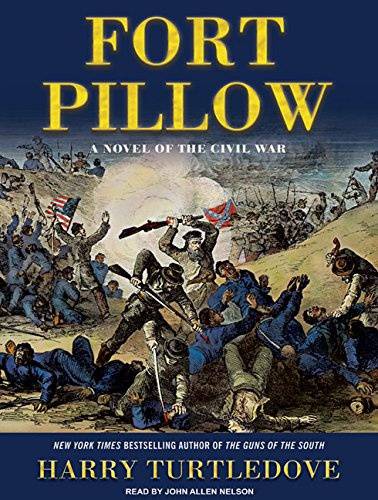 Here in this book about Fort Pillow's events are told well, just in great detail!

3 May 1864 at a meeting with the President discussed how to respond to the massacre at Fort Pilush, and cabinet members made various proposals, in particular, in the case of the capture of Forrest or Chalmers (one of the officers who participated in that battle) , put them on trial for violating the laws of war. 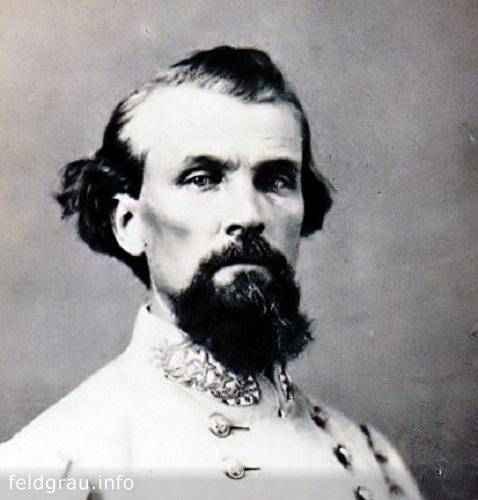 As a result, Nathan Bedford Forrest was not convicted by the court, and then he became the first Great Klux Klan Wizard, although he later withdrew from this "organization"!