On the situation in the north of the Syrian Arab Republic

3 2016 June
11
The Coordination Center for Reconciliation of the Warring Parties in Syria provides information that armed groups in the north of the SAR receive weapon and ammunition from Turkey. Press Service of the Ministry of Defense of the Russian Federation reports that in the area of ​​the city of Azaz (Aleppo Province), as well as in the area of ​​Dar-Taaz (Idlib Province), armed militia groups arrive, as well as trucks with various weapons.


From the message of the press service of the Ministry of Defense of Russia:

The Center also receives information from local residents about the intensive movement of armed groups of militants, cross-country vehicles with various weapons, as well as armored vehicles and tanks, to the areas of the settlements north of the city of Aleppo: Hraitan, Kafer Hamra and Mukhaim Khandrat, as well as south-west of this city: Khan Tuman and Khan al-Assal.

Map of the distribution of forces in the north of Syria: 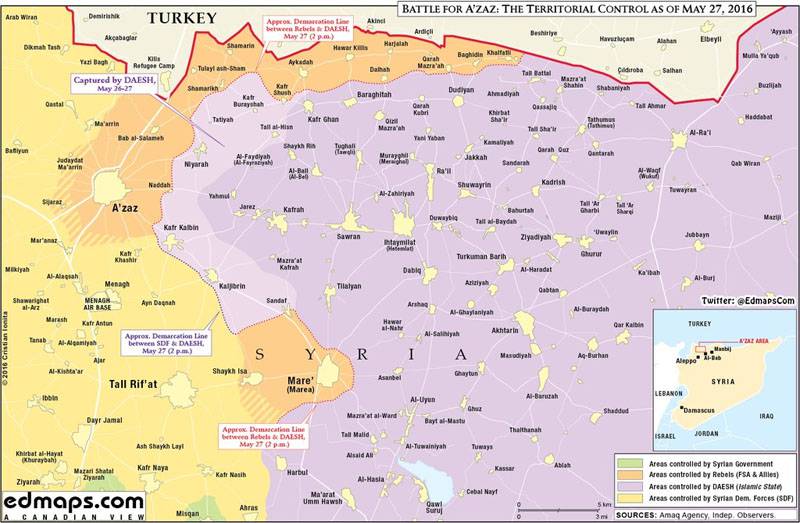 Earlier on our site was published material that from the aircraft of the so-called American coalition in the north of Syria carried out the dumping of weapons and ammunition. Representatives of the coalition claim that these weapons fell into the hands of the "rebel group" holding the town of Marea (Aleppo Province). Information Agency Reuters cites information that this armed group allegedly acts against the Dzhebhat al-Nusra militants. The Russian Defense Ministry has not yet confirmed the information that the "rebels" armed by the American "coalition" are really fighting against a group recognized as terrorist at the international level.

In the Coordination Center for reconciliation of the warring parties, it is noted that within a day two more settlements have joined the cease-fire regime in Syria.

Ctrl Enter
Noticed oshЫbku Highlight text and press. Ctrl + Enter
We are
The action “Military service under the contract is your choice!” In Rostov-on-Don: future contract servicemen, exhibitions and “Russian Knights”Reports from the militia of New Russia for 29 August 2014 of the year
Military Reviewin Yandex News
Military Reviewin Google News
11 comments
Information
Dear reader, to leave comments on the publication, you must sign in.