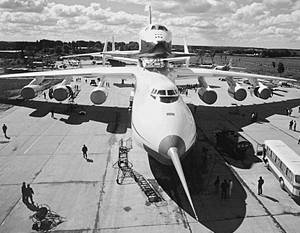 The ambitious task posed by Petro Poroshenko — to restore in Ukraine the production of the Anya-225 Mriya aircraft developed in the USSR has little to do with reality. Even if Ukraine suddenly finds the huge money needed for such a project, there are many other obstacles that make Poroshenko’s statement look like sheer political demagogy.

President of Ukraine Petro Poroshenko set the task for the Antonov aircraft concern to study the possibility of producing the Mriya An-225 aircraft developed in the USSR (the largest super-heavy transport jet aircraft in the world) and the An-70 cargo aircraft, which can be used as a military aircraft transport and operational-tactical aircraft.

"Mriya" in a single copy, which in itself will cost half a billion dollars, not counting the cost of restoring production. What will Ukraine do next? ”

“Today we saw the possibility of building another Mriya An-225, we have the hull of the unique An-70 aircraft, I set the task to calculate all the possibilities, carefully study the market and report to me on the possibility of completing these symbolic airplanes,” Poroshenko said. speaking at an event dedicated to the 70 anniversary of the Antonov enterprise.

Recall that in January of this year, by the decision of the Cabinet of Ministers of Ukraine (which at that time was still headed by Arseniy Yatsenyuk), the Antonov aircraft concern was liquidated, and its assets were transferred to the Ukroboronprom state concern. As experts noted, it seems that the Kiev authorities intend to control the work of aircraft plants in this way, for example, in terms of suppressing cooperation with Russia. However, such control calls into question the very possibility of the existence of the Ukrainian aviation industry, which was created as part of the all-Union aviation industry.

So, in the 2000-ies it was reported that the An-70 aircraft should be made jointly with Russia, but in April 2014, the “post-day” government of Ukraine announced the termination of military-technical cooperation with the Russian Federation. As a result, the production of An-70 was stopped.

As for the An-225 "Mriya" (translated from Ukrainian - "Dream"), now only one of these aircraft is in flying condition and operated by the Ukrainian company Antonov Airlines.

“Mriya” is a rather specific aircraft, ”Maxim Pyadushkin, managing director of the Air Transport Observer magazine, reminded the VZGLYAD newspaper comments. - An-225 was created with only one task - to carry the Soviet "Burans".

The main purpose of the heavy transport aircraft in the framework of the Buran reusable spacecraft project was the transportation of various components of the launch vehicle and the spacecraft from the production and assembly site to the launch site. It is obvious that in Ukraine such tasks simply do not exist.
We add that the largest aircraft in the world participated in the “Soviet shuttle” program only partially - An-225 transported the Buran to the Le Bourget air show 1989 of the year and made several demonstration flights to Baikonur on the eve of the collapse of the USSR.

In its non-cosmic quality, the air supercar was not particularly relevant: for the 4,5 of the year, Mriya made about two dozen flights, and from 2012 to 2015 it did not fly at all.

“It is very sad that such statements are made by the president of the country. Let's start with the simplest - with the restoration of production. In order to restore something, it is necessary that at least it ever be in Ukraine, ”said Roman Gusarov, editor-in-chief of the State Duma Committee on Transport, in an interview with the VZGLYAD newspaper.

Such aircraft as the “Mriya” were built with broad cooperation with other plants, the source said. And only a part of these enterprises is located on the territory of Ukraine: “Kiev Aviation Production Association” (KiAPO), now the Antonov serial production plant, and Zaporozhye Motor-Building Plant, the current Motor Sich.

But a number of An-225 serial units and parts were manufactured at the Ulyanovsk Aviation Industrial Complex (UAPK) - now the Aviastar-SP joint-stock company, the chassis were manufactured at Gorkovsk, now Nizhny Novgorod, Gidromash. The main central parts of the flared wings were supplied by the Tashkent Aviation Production Association. V.P. Chkalov. Specialists from the Voronezh Aviation Plant were involved in painting the fuselage.

“As for the An-70, this aircraft was also built together with Russia,” Gusarov reminds. - Moreover, we note that the issue of ownership has not yet been resolved, because An-70 was largely created with Russian money. The customer was Russia. It is unclear whether Ukraine has the right to assemble these aircraft. And even if it has the right - will Russia really supply Kiev with unique Stupino propellers, which are produced only in Russia and are intended only for this aircraft? (“Stupino Machine-Building Production Enterprise”, the former plant No. 120 of the USSR Minaviaprom in Stupino, Moscow Region, is one of the largest enterprises producing propellers - comment. VIEW).

“An-70 is a normal transport plane, but the question is who will order it,” notes Maxim Pyadushkin. - Initially, this project was developed with an eye to the fact that the Russian Air Force will purchase a sufficient number of such machines. But, as I understand it, the Russian videoconferencing will not buy it. And how much the Ukrainian Air Force needs it and how much finance they have to buy these planes in quantities that justify their production is a question. ”

“Theoretically, Ukraine can build another“ Mriya ”in a few years,” notes Gusarov. “But the question is different - why does“ Mriya ”need a market?”

“Burana” is not there now, and using “Mriya” as a cargo plane is impractical, - Maxim Pyadushkin stresses, in turn. - The plane is too big. It can work only in the market of irregular oversized cargo, along with the An-124 "Ruslan". The market is quite narrow, and in order for the transportation to pay off, we need good logistics, we need to consolidate the cargo very well, this aircraft will not work for any transportation. ”

Today, the capabilities of this aircraft are redundant, agrees Gusarov. Mriya performs single flights on single contracts, these are unique transportations. Since the plane is already there, its residual value is zero, so you can operate it and try to compete in the market with An-124.

“But the cost of transportation is higher — the Mriya has two more engines, the fuel consumption is higher, and the car is heavier. “Ruslan” perfectly closes the market for oversized cargo, Gusarov believes. “Incredibly rare are cases when it is necessary to transport cargoes literally“ on ”an aircraft - like“ Buran ”, these are top-notch transportations that are required once every 5 – 10 years”.

For this, there is no point in building a “very, very expensive plane,” the source said. “If we take the mass production of such an aircraft, even taking into account the free labor force, relatively cheap resources available to Ukraine, taking into account the hryvnia exchange rate, the aircraft will cost over 200 million dollars, but rather 300 – 500 million dollars,” Gusarov believes.

It should be noted that the first vice-president of Antonov, Alexander Kotsyuba, in a recent interview with the Ukrainian portal Liga.Biznes, said: “According to conservative estimates, the creation and launch of such an aircraft into mass production is estimated at 3 – 4 billion dollars. The lion's share of costs is occupied by pre-production, tooling, equipment purchase, certification and release of design documentation. ”

For comparison, in March it became known about the amount that would cost the partial restoration of the equipment for the production of the Tu-160 strategic bomber at the Kazan Aviation Plant named after him. S.P. Gorbunova (branch of PJSC "Tupolev"). The total amount of tenders reaches almost 1,7 billion rubles, Interfax reported. According to experts, the restoration program of mass production of the Tu-160М2 (which was announced in March by the President of Tatarstan Rustam Minnikhanov and the President of the United Aircraft Building Corporation (UAC), Yuri Slyusar and supported by the leadership of the Ministry of Defense) can cost hundreds of billions of rubles.

It is obvious that the budget possibilities of Russia and Ukraine are clearly incomparable.

“We are still discussing the issue of resuming production of Ruslans, but the issue is not moving, since there is no order for at least 40 machines for this project to pay off,” the expert emphasizes. - And “Mriya” in a single copy, which in itself will cost half a billion dollars, if not counting the restoration of production - what will Ukraine do with it next? ”

Poroshenko’s statement is nothing more than populist, aimed at “raising national self-awareness”, but by no means pursuing practical goals, concludes Gusarov.