As a result of a double terrorist attack in Damascus, the 44 man died, 166 was injured 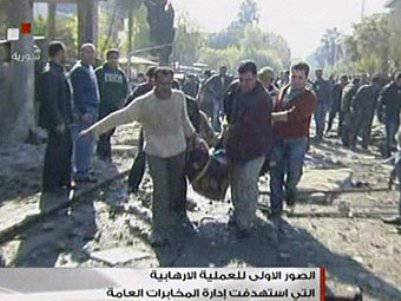 The explosions thundered near the buildings of the Syrian secret services. Authorities suspect al-Qaeda.

In the Syrian capital, Damascus, the day of December 23 thundered two powerful explosions. According to the statement of Faisal Mikdad, the deputy head of the Syrian Foreign Ministry killed at least 44 and injured 166 people as a result of the attacks, RIA "reportsNews".

According to the Syrian State Television, the attack was carried out by two suicide bombers who almost simultaneously loaded off-road vehicles loaded with explosives into the headquarters, as well as into another building of the General Directorate of State Security, an analogue of the FSB of Syria. The victims of the attacks were not only military personnel, but also civilians.

The shown video shows the damaged buildings, the rescuers carrying out the bloodied people, the ambulance cars, reports the BBC.

“The house was shaken by the explosions. It was scary,” said Syrian journalist Hamidi Nydahl, who lives near the headquarters where the attack occurred. The journalist also said that after the explosions, shooting was heard almost immediately.

So far no one has taken responsibility for the attack. However, the authorities stated that the explosions that took place were the work of al-Qaeda militants.

At the same time, opposition activists argue that both attacks are rigged by government forces to convince observers from the Arab League (League of Arab States), who arrived in the country the day before, that militants are operating in the Syrian capital.

The main task of foreign observers is to prepare the conditions for the work of the Arab League mission. In particular, specialists should establish who is responsible for the death of civilians - Syrian Interior Ministry officials and military or armed fighters who, according to the authorities, attack state institutions and citizens' homes, as well as incite religious strife.

The Syrian National Council, which unites the opposition forces of the country, declares that the concessions of the Arab League by the Syrian authorities are not such, this is just a political maneuver. “Such“ behavior ”is just a trick undertaken by the regime to conceal its crimes,” said Burkhan Galiun, leader of the SNA. He also added that if the government does not stop the repression, the opposition will appeal to the Arab countries for military assistance to protect the protesters.

Participants in the unrest put forward the requirement for the resignation of the head of state. They also accuse the government of using against civilians weapons. The authorities threw regular troops, armored vehicles and Tanks, stating that force is used against armed gangs.

During the nine months of the armed clashes, according to the UN, more than 5 thousand people became victims of the unrest. The official Syrian authorities cite more modest numbers: 1,5 thousand dead, of which 1,1 thousand law enforcement officers. At the same time, for the entire period of confrontation in the country, no explosions involving suicide bombers were recorded.
Military Reviewin Yandex News
Military Reviewin Yandex Zen
35 comments
Ad