Media: The Turkish army built a roadblock near the Syrian Afrin

27 May 2016
39
TV channelAl Mayadin»Reports that the Turkish army continues to build infrastructure in Syrian territory. Moreover, the Turkish special forces are moving towards the settlement of Afrin, located in the northern part of the province of Aleppo. According to the channel, the forward detachments of the Turkish army advanced more than 700 meters deep into the territory of the Syrian Arab Republic. 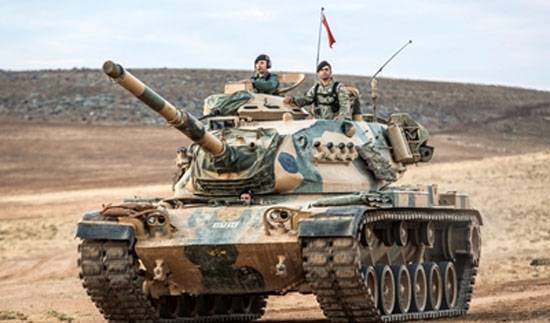 Official Ankara does not confirm this data. But they are confirmed by the Kurds who inhabit the north of Aleppo in the region of Afrin. According to the Kurdish citizens of Syria, the Turkish army erected a checkpoint near Afrin and controls the movement of vehicles in the area.

It should be noted that Afrin is a strategically important settlement near the border with Turkey, as it passes through the highway connecting the province of Aleppo with Turkish territory. It is along this road that the supply of various terrorist groups operating on the territory of Syria has been carried out over the last time. On the same road from the territory of Turkey are delivered weapons and food for militants in Aleppo.

At one time, a reportage on such supplies was prepared by journalists from the Turkish edition. Cumhurriyet, which after the publication of the report was arrested by Turkish police. Recall that in the report it was about how trucks belonging to the Turkish special services, transfer weapons and ammunition to the territory of Syria.