Real sea giants: "Emperor Alexander III" and others like him 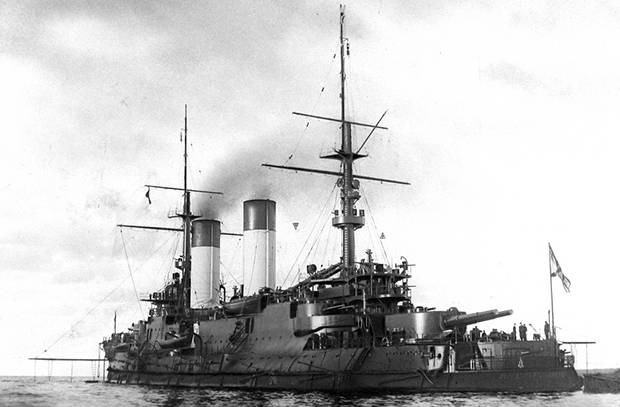 24 in May 1900 in St. Petersburg laid down the first two squadron battleships of the Borodino type, which became legends of the Tsushima battle

The Russian fleet, through the efforts of Emperor Alexander III at the end of the XNUMXth century, turned into one of the largest military fleets in the world, experienced a real shipbuilding boom on the eve of the Russo-Japanese war. The rate of growth in the number of ships taken during the years of Alexander rule, the emergence of new projects and the expansion of the classification of the Russian imperial fleet preserved under the heir of the famous king - Emperor Nicholas II. It was under him that the Russian sailors received serious submarine forces, it was under him that a cardinal change in the structure and capabilities of the fleet ended. Under him, in Russia, the largest series of battleships of the era of the armored fleet was laid down - squadron battleships of the Borodino type. The first two ships of the project - actually Borodino and Emperor Alexander III - were laid down on May 24 (11 in the old style) at two St. Petersburg shipyards: the New Admiralty and the Baltic Shipyard, respectively.

Both at the time of laying and at the time of entry into service in 1903-1904, Borodino-type ships were among the most modern and sophisticated, not only in the Russian fleet, but also in comparison with the fleets of other states. The basis for the creation of the Borodino project was the battleship Tsesarevich, designed and built for Russia in France. From it battleships type "Borodino" inherited location artillery main fire - 305-millimeter - two two-gun turrets on the tank and on the poop, but smaller caliber guns - 152 mm (12 guns), 75 mm (20 guns) and 45 mm (20 guns) placed a little differently, seeking to provide them with the largest sector of fire. Distinguished ships of the type "Borodino" and more powerful armor: they had two solid armor belts, the lower of which had a thickness of 203 mm, and the top - 152 mm. In fact, like the Tsesarevich, the squadron battleships of the Borodino series were the first ships of this class in the world that were protected throughout the waterline by two continuous rows of armor plates.

The actual father of the squadron battleships of the Borodino type was the chief ship engineer of the St. Petersburg seaport Dmitry Skvortsov. It was he who received the Maritime Technical Committee, based on the French project of the battleship Tsesarevich, to create a new project designed for the capabilities of domestic shipyards and the use of almost exclusively Russian materials and mechanisms. Moreover, Skvortsov was instructed to "adhere to the conceptual design of the French shipbuilders and maintain" speed, draft, artillery, booking and fuel on the 5500 miles, although with an acceptable "some increase in displacement."

Dmitry Skvortsov, who had already been working on the construction of such ships as the Admiral Ushakov, a battleship of coastal defense and the General-Admiral Apraksin of the same type with him, had coped with the task in just 20 days! And coped brilliantly, I must say. Given that the booking thickness of the squadron-like battleships of the Borodino type was slightly less than that of the Tsarevich, their internal structure became more original and guaranteed better resilience and survivability. In addition, due to the insignificant - only on 5 mm! - reducing the thickness of the armor "Borodino" and other ships of this project received 75-mm artillery protected by armor: they managed to place it in an armored casemate, which was closed on top of 32-mm armor and divided by 25-mm armor bulkheads. In addition, ships of this type shared transverse watertight bulkheads that provided unsinkability to the 11 of the main compartments: ram, bow cistern compartment, ammunition bow compartment, auxiliary caliber ammunition bow compartment, first and second stoker compartment, machine compartment, auxiliary ammunition feed compartment aft sub-turret compartment with ammunition of the main caliber, a compartment of the steering machine and mechanisms and a tiller compartment. 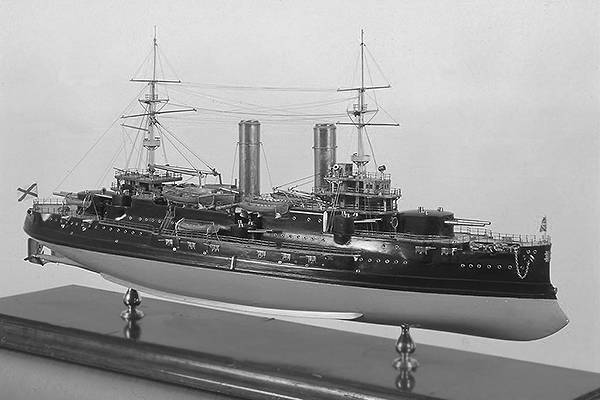 Model of the squadron battleship "Borodino" 1901. Photo: From the funds of TsVMM
Despite the fact that during the approval of the project of squadron battleships of the Borodino type, and especially during the construction of the series, the current changes were constantly made to the drawings and documentation, as a result, all five battleships - Borodino, Imperator Alexander III, Orel "," Prince Suvorov "and" Glory "- turned out to be very good ships. Although the construction and operational overload, due to which the battleships were not fast enough and maneuverable, unfortunately, became one of the reasons that in real combat these “real sea giants”, as the Russian newspapers of that time called them, were defeated in the Tsushima battle . Four battleships participated in it - all ships of the “Borodino” series, participating in the Russian-Japanese war; the fifth, "Glory," did not have time to go to the Far East.

Of the four battleships that were part of the 2nd Pacific Squadron and took part in the battle of Tsushima, three - Borodino, Emperor Alexander III and Prince Suvorov - were killed. These squadron battleships, which at that time were the newest ships of this type in the Russian fleet, made up the core of the 1st armored squad. On the Suvorov, squadron commander Vice Admiral Zinovy ​​Rozhestvensky held his flag, and it was this battleship who led the convoy. Japanese ships were the first to open fire on it. But in the end, three handsome battleships, who until the last resisted the enemy and answered their own Japanese shells, having fulfilled their duty, went to the bottom, without releasing the Andreevsky flag. All members of their crews died along with them: only one sailor from among those who served on the squadron battleship Borodino managed to escape. As for the “Eagle,” Rear Admiral Nikolai Nebogatov handed it over to the Japanese along with other ships of the 2nd squadron that remained in service. They rebuilt and modernized the ship, and he served under the name "Iwami" until 1924, until he was shot as a target ship of the Japanese aviation.

The Eagle has outlived all of its project partners. After the death of three other battleships of the series in the service in the Russian fleet, only the squadron battleship "Glory" remained in the Tsushima battle. Launched in the 1905 year, he simply did not have time for the Russian-Japanese war and remained in the Baltic. He participated in the defense of the Gulf of Riga in 1915, in 1916, he underwent repairs and upgrades, and in October 1917 took part in the Moonsund battle. It was the last for “Glory”: because of the damage received in battle, the ship almost lost its course and was sunk at the entrance to the Moonsund Channel.

And yet, despite the fact that the service of almost all squadron battleships of the Borodino type was short-lived and did not say happy, this project would forever remain in stories Russian fleet and Russian shipbuilding. After all, the experience gained by domestic shipbuilders in the design and construction of these unique ships, and by Russian sailors during combat service, proved invaluable. Although neither one nor the other had time to use it fully: troubled revolutionary times came too quickly, and after they ended, the era of the battleships actually came to an end. Still, Borodino, Emperor Alexander III, Eagle, Prince Suvorov, and Glory managed to enter their glorious page into it.