Kamran: time to scatter stones, time to collect them

20 May 2016
128
As one character said the Soviet cartoon, the tree just will not begin to buzz. Especially in our time. And, if more and more active conversations began around the base in Cam Ranh, then apparently, something more is hidden behind this than it seems at first glance. 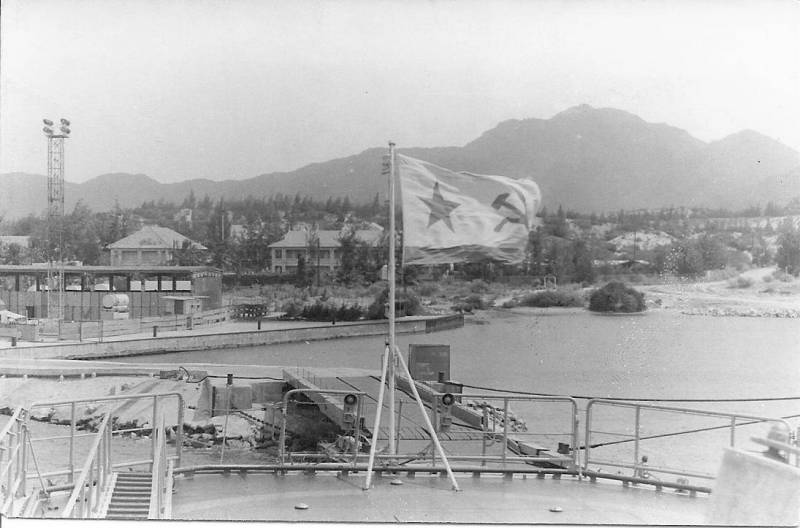 On May 17, Vietnamese Ambassador to Russia Nguyen Thanh Sean made a statement saying that Vietnam is not against Russia's return to the military base in Cam Ranh, but this cooperation should not be directed against third countries.

"Viet Nam’s policy is not to join military alliances or ally with one state against another. In this context, implement the ports of Cam Ranh for multilateral international cooperation in order to provide maritime transport services, repair ships and develop military equipment to ensure peace and stability in region is a suitable destination. "

It is worth figuring out what stands behind all this. Just because such statements are just not made by ambassadors.

History It began back in 1979, when two months after the end of the Vietnam-China conflict, the USSR and Vietnam signed an agreement on the use of the port of Kamrani as a logistics point of the Soviet Naval fleet for a period of 25 years.

Subsequently, the largest Soviet military base abroad with a total area of ​​100 square meters was created here. km All infrastructure has been modernized. The 169th Guards Separate Mixed Station was constantly based at the airport aviation a regiment of three-squadron aviation personnel of the Pacific Fleet, including Tu-16K anti-ship missile carriers, Tu-95RTs naval reconnaissance and target-guards, Tu-142 anti-submarine aircraft, MiG-23ML fighter jets, and also a Mi-14 helicopter squad.

Under the contract, at the same time, 8 — 10 of Soviet surface ships, 4 — 8 submarines with a floating base, and up to six other ships could be at the same time. In addition, the simultaneous stay at the airfield 14 — 16 of rocket-carrying aircraft, 6 — 9 reconnaissance and 2 — 3 transport was permitted. By agreement between the USSR Ministry of Defense and the Ministry of National Defense of Vietnam, the number of ships and aircraft could increase.

A number of tasks were assigned to the E & P in Cam Ranh: provision of ships and vessels during the stay with electric power, water, fuel and lubricants, food; maintaining the established reserves of the MTS, their issuance and delivery to the ships and vessels of the Soviet Navy that were passing; the implementation of a transit link between ships and ships from the Pacific and Indian Ocean zones with command posts of the Pacific Fleet and Navy; the use of an airfield for the basing of anti-submarine and reconnaissance aircraft; development and maintenance of the Soviet-Vietnamese Commonwealth.

With the launch of the 17 th operational fleet squadron of the Pacific Fleet, Cam Ranh received the status of a naval base.

According to the Soviet-Vietnamese agreement, the rent of the base was free. Since 1991, the Vietnamese side has unofficially offered the USSR, and then Russia, to pay the rent.

In 2001, the Russian leadership decided not to renew the agreement with Vietnam and to evacuate the base ahead of schedule. Russian Foreign Minister Igor Ivanov noted in 2002 that "over the course of 10 years, our navy did not go into the Indian Ocean and did not use the services of a naval base." The base was closed after the closure of the military base in Lourdes (Cuba). The last Russian military left the Cam Ranh in May 2002.

Such is the background.

It should be noted that immediately after the hasty departure of their Camrani by our military, the gallant guys from the Pentagon came out to the representatives of Vietnam. And they offered to rent them to Cam Ranh.

Kamrani Port is considered one of the best deep-water ports in the world. Plus, the former American airfield, which the United States lost during the war in 1975, and ours were well modernized.

To the credit of the Vietnamese, I must say that everything is fine with their memory. And the Americans did not receive the port and the airfield. Kamran continued to exist as a port and an international airport, let's say, in a truncated manner.

10 years have passed. During this time, much has changed. Russia was changing little by little, the situation around us was changing too. Somehow imperceptibly Russian from the category of "poor and needy" moved into a different category. Suddenly, Kamran resurfaced as a submarine of a potential enemy floats in the middle of the order.

12 November 2013, literally six months after taking office, Vladimir Putin and Vietnamese President Truong Tan Shang sign an agreement to create a joint base for the maintenance and repair of submarines in Cam Ranh.

I note that the signing of this agreement did not attract much attention. But all the fun was ahead.

In February, 2014, Defense Minister Sergei Shoigu said that Russia would expand its military presence in the world: negotiations are underway to deploy military facilities with Vietnam and Cuba, and “active work is underway in the Seychelles, in Singapore, Algeria, Cyprus in Venezuela, Nicaragua and several other countries. "

Shoigu noted that at the equator and in other regions of the world it is necessary to provide refueling of the aircraft of the Russian Long-Range Aviation.

And since the spring of 2014, the Kamrani airfield was first used for servicing the Il-78 aircraft, which provide airborne strategic missile-carrying Tu-95MS.

This is not a saying, but also not a fairy tale. Although the tale of 2014, the year was already in full swing. And, watching this fairy tale, we simply missed the moments that began to develop on the other side of the globe. In Vietnam.

In November, 2014, during the visit to Russia of the Secretary General of the Central Committee of the Communist Party of Vietnam Nguyen Phu Chong, an agreement was signed on a simplified procedure for calling Russian ships in the Vietnamese port of Cam Ranh. As explained in the Russian Ministry of Defense, Russian ships and ships after serving in the oceans need only notify the port authorities to make a call to Cam Ranh. This was an important event, if only because Vietnam became the second country (after Syria) with which Russia agreed on a “consensus” procedure for the entry of ships of the Navy.

This is more serious. The president is good, but those who lived in the USSR are well aware that in a country with a socialist structure and order, the secretary general of the ruling (and only in Vietnam) party is twice as weightier.

Even then, some military experts suggested that the signing of another agreement with Vietnam, which also operates with Syria, to create a logistics center for the Russian Navy (PMTC) in Cam Ranh, or rather, its return, is not far off the mark. Yes, few people heard them, because what kind of Kamran is here when such things happen. Crimea sailed!

But gradually everything calmed down (if I may say so), the Crimea remained in the new-old historic port of registry, NATO started the next movements at our borders, and Cam Ranh again emerges. Yes, and in the comments of the Ambassador of Vietnam in Russia.

It should say a few words about the base in Cam Ranh. This is not a Syrian Hmeimim, no. It is much more powerful. If Hamim is really a PMTO, a gas station with a minimarket, so to speak, then Cam Ranh is a full-fledged deep-water port with excellent infrastructure.

In Soviet times, the sign of the PMTO hid behind itself a full-fledged naval base of the 17 th operational squadron. There were simultaneously 8-10 surface ships and up to eight submarines. Plus court security. The presence of such a number of full-fledged warships allowed the Pacific Fleet to control the south-western part of the Pacific and the entire Indian Ocean.

Is this necessary today? Perhaps the most important question.

It makes sense to just look at the world map. Cam Ranh is a crossroads on the way from the Pacific to the Indian Ocean. Indeed, from there it is easy to control the many movements of the vessels of the probable "partner." Plus, very important, to the Persian Gulf - within reach. Our yardstick. And what is the Gulf for our "partners", do not say.

Kamran (unlike Hmeimim) is very difficult to "lock the lock." This is not the Mediterranean puddle, which can really be closed by the Bosphorus and Gibraltar.

In addition, there are at least two strategic allies in the region. This is Vietnam and India. Plus China, whose status is less defined. And from the ambitions of China, almost all the smutters in the region have come lately. But since the China-DPRK bundle is on the opposite side of the USA-Japan-South Korea bundle, we can say that we can be friends against our likely adversary.

And one more argument to the question of expediency. Since it turned out that the missile defense system seems to be working against Iran near our borders in Romania, Poland and other places, Tanks in the Baltic States and Poland, these are elements of the global struggle for world peace, then in this case, our presence in other regions, not even with tanks, but with something more efficient, is justified.

No one is talking about creating such a system of bases, which the United States has. We never catch up with them, and there is no point. But the need for reference points in different parts of the world, the same tracking systems - all this is really necessary and important.

There is no doubt that in the future we will observe the same picture: the deployment of various US military facilities (NATO is no more than a screen) near our borders. So the answer should be. Indeed, this is not just another crazy arms race, but the ability to give exactly the right answer.

Or, what I like much more - the ability to quickly and inevitably deliver a preemptive strike. Of such places that the Pentagon was the most difficult to block. Get closer, let's say.

By the way, the Cubans did not pass the base to Lourdes either, if that.

In past years, many stones were scattered. Even too much. It is not necessary to list, continuous afflictions, and only. But, as it was said in a smart book, if there was a time to scatter stones, then sooner or later it would be time to collect these stones.

Apparently, this time has come in the year 2014.

To paraphrase, I will say this: we were already embraced. Kissed. All these guys and ladies from the countries of "enlightened democracy." But for some reason, all these kisses and hugs can be called Jewish. Especially in the light of recent events around our borders.

So the time to collect the scattered stones has come. And the time has come to shy away from the embrace of "partners." No good will lead to this.

Of course, there will be opponents of our presence in Cam Ranh and other places among our fellow citizens. Without this in any way. They will start squealing about bad roads and hungry retirees. But this song is old and useless. Heard.

But if we really want to be a force to be reckoned with, we will have to understand that the stones really need to be re-assembled.

At least in order to give this stone on the head the next climber to hug with a stone in his bosom. Well, I hope everyone understood who it was about me.