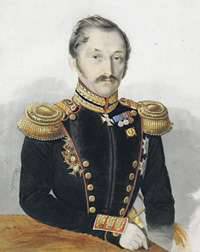 On a rainy March day in 1869, the officer was buried in St. Petersburg. For his coffin, the crown prince Alexander Alexandrovich, the future emperor Alexander III, walked right up to the gate of the city Lutheran cemetery. The late man committed suicide. Suicide is a grave sin for a Christian. It is impossible to repent for him and, therefore, to receive forgiveness from God. The person to whom life is given from above challenges the Creator, intending to use His gift in this way. According to church canons, they do not read the suicides and do not remember them. They should be buried in a remote area of ​​the cemetery.


However, this suicide was buried and buried as a sinless Christian. For this blessing was received from the bishop. Most likely, the suicide was recognized as mentally ill, insane at the time of the suicide. Therefore, the highest ecclesiastical authority allowed the funeral. Was the officer insane? Or did his voluntary retirement take place for another reason? After all, he had high awards, was a talented military engineer-artilleryman and a brave warrior. I received previously unknown information about him, having worked in the archives. This is what was learned.

WINE OF THE HEIR OF THRONE

We are talking about Captain Karl Ivanovich Gunnius (1837-1869). On the Internet, in historical publications do not have complete biographical information about him. You can find only the date of death, as well as very short and, let's say, not entirely correct information about it. Here is information from the archives of the Museum of Artillery Troops: “He died suddenly from excessive and overwhelming work in March 1869, he was only 32 years old. He was not married, was not on leave or off duty ... His death greatly slowed down the introduction of the production of metal cartridges in Russia. "

The Russian censorship in those and subsequent years did not pass information of negative content regarding representatives of the reigning dynasty. And in the death of this officer, a certain share of the blame lies with the heir to the Russian throne. Therefore, the tragic history was silent for many years. In our time, the authors mention the fate of an officer who was publicly insulted by the Tsarevich, but do not name his name.

Peter Kropotkin did not call him in his “Notes of the Revolutionary” either. Here is what is said in the memoirs of the anarchist ideologue: “I knew in St. Petersburg an officer, a Swede by descent, who was sent to the United States to order rifles for the Russian army. During the audience, the crown prince gave full space to his character and began to speak rudely with the officer. He probably answered with dignity. Then the Grand Duke became infuriated and cursed the officer with bad words. The officer belonged to the type of quite loyal subjects, who, however, held with dignity, which often occurs among the Swedish nobility in Russia. He immediately left and sent a letter to the crown prince demanding that Aleksandr Aleksandrovich apologize. The officer will also write that if after twenty-four hours there is no apology, he will shoot himself ... Alexander Alexandrovich did not apologize, and the officer kept his word ... I saw this officer from my close friend that day. He waited every minute for an apology to arrive. The next day he was not alive. Alexander II, angry at his son, ordered him to go behind the officer’s coffin. It seems that it was these traits of Alexander III that primarily affected his relations with people dependent on him. Therefore, he did not take seriously the threat of the officer. The crown prince, apparently, was already accustomed at that time to other notions of honor and dignity in his environment. ”

Karl Gunnius was born on February 23, 1837 in a family of small local Livonian nobles. His father was a pastor. In 1857, he graduated from the Mikhailovsky Artillery School in St. Petersburg in the first category (with honors), with the right to wear an axelette. With the rank of second lieutenant involved in the war with the highlanders of the North Caucasus. For courage, he receives the Order of St. Anne of the 3rd degree, St. Stanislav of the 3rd degree with swords and a bow and a medal. In 1861 he entered the service in Armory Artillery Committee Commission. Two years later, he is appointed secretary of this commission. Since 1867, he is the clerk of the Technical Committee of the Main Artillery Directorate. Later he became the head of a new cartridge plant in St. Petersburg.

Here it is necessary to give explanations on a business trip to the United States. Hunnius and Colonel Alexander Gorlov (1830 – 1905), a well-known scientist, designer and military diplomat, were there on the instructions of the Minister of War. Subsequently, they improved the Berdan American rifle so that the Americans began to call it the "Russian rifle." It was adopted in the 1868 in the arsenal of the Russian army under the name "Berdan Rifle No. 1", which the military called the "Gorlov-Hunnius Rifle". It was her Carl Gunnius who showed the heir to the throne. He boldly told the Tsarevich that he was not right in evaluating the weapon, that his opinion was hasty. In response, the heir rudely insulted the officer.

Gunnius had time before his death to draw up drawings, prepare tools and equipment for the production in Russia of rifles and cartridges for it, created by the new technology. Karl Ivanovich dreamed of creating the first Russian machine guns.

The death of the captain remained, for obvious reasons, not noticed by the Russian society. But the protests of Russian officers against insulting their honor took place in subsequent years.

The well-known Russian statesman Sergei Witte wrote in his Memoirs about the suicide of another officer, Peter Yefimovich Kuzminsky. Publicly, Emperor Alexander II called him a deserter. And he was a hero of the Turkestan campaign of the Russian army against Kokand and Khiva. For distinction and bravery, he was awarded three soldiers' crosses of St. George. He was seriously wounded many times, including poisoned sabers. In 1876, he fought on the Serb side in a war with the Turks.

We read Witte's memoirs: “When the imperial train arrived in Iasi, we got off the train and stood near the carriage where the emperor was. The sovereign, opening the window, looked into the distance ... Suddenly I saw that his eyes, fixed on the platform, stopped, and he began to look intently at something and breathed extremely hard. Naturally, we all turned around and began to look in the same direction. And now I see that the captain Kuzminsky is standing there, but already in the Circassian with all his George. The emperor, turning to him, says: “Are you the captain of Kuzminsky?” He says: “Exactly, Your Majesty.” Then he begins to come closer to the carriage, in order to apparently apologize to the Sovereign, and the Sovereign says to him: “You are a deserter, you escaped from my army without my permission and without the permission of your superiors ...” Then the emperor will say to the head of the rear of the army, General Katelia “ arrest him and put him in a fortress. " And suddenly I see that Kuzminsky takes out a dagger and quietly sticks it into his heart. In order for Emperor Alexander II not to notice this, we all surrounded Kuzminsky: it was too late to take out the dagger, since he stuck it in his heart in half. Surrounding him so that he did not fall, but stood, we gradually, pressing him, moved away from the car. By this time other officers arrived, as there were a lot of people on the platform. Thus, we dragged him into the room ... and put the dead on the steps ... Meanwhile, the emperor did not move away from the window, not understanding what was the matter, everyone asked: "What is it? What happened? ”In order to get out of this situation, I turned to the chief of the railway, asking him to send the train as soon as possible. The emperor continued to wonder and asked me: “Did the time run out, why did the train leave?” I said: “Exactly, Your Imperial Majesty. I am no longer the boss here, and, apparently, the train should go, because time has passed. ” Then, when the train left, we approached Kuzminsky; he was dead ... In Chisinau, a telegram came from the imperial train signed by the Minister of War. In it, the emperor deigned to forgive Kuzminsky and “not put him in a fortress”.

Further, Witte suggests that, in all likelihood, the emperor was reported about Kuzminskoye as a man worthy of any praise. The Tsarevich Alexander Alexandrovich probably also stood up for the arrested person. But the captain was not to return ...

Apparently, the emperor asked the members of the Holy Synod of the Russian Orthodox Church to allow the burial service of Peter Kuzminsky to be allowed, arguing that the suicide was seriously injured and, possibly, was in a state of passion.

General of artillery D.A. Gershtenzweig shot and killed in August 1848, under the influence of a difficult moral state. He failed to timely fulfill the sovereign's order for his corps to enter the territory of Turkish Moldova. There began unrest. He was buried with a funeral service not far from Odessa. The grave is preserved. The general, being a military administrator, helped to equip this part of Novorossia.

Lieutenant-General Alexander Danilovich Gershtenzweig was the Warsaw military governor-general. In July, the 1861 of the Year in the Kingdom of Poland was brewing a new armed uprising against Russia. Gershtenzweig was a supporter of strict measures to stop the unrest and in this respect did not agree with the governor of the Kingdom of Poland, Count KI. Lamberg Between them there was a public conflict with mutual insults. The governor released several active Polish rioters. They were previously arrested on the orders of Gershtenzweig, whom Lamberg did not inform him that he would release the Poles to freedom.

Both generals were listed in the retinue of His Majesty the Emperor Alexander II, were adjutant generals. After a quarrel, each of them demanded the satisfaction of his insulted honor. We chose for this the so-called American version of the duel, that is, suicide by lot of one of the opponents. In the cap put two folded pocket handkerchiefs. A scarf with a knot went to Gershtenzweig. On the morning of October 5 1861, he shot himself twice. He was badly injured and died in 19 days. He was buried in the Trinity-Sergius Desert near St. Petersburg. In 1873, his son, Alexander, was buried next to his grave. He was the captain of a guards regiment and also committed suicide like his grandfather and father. The reasons for his suicide are not given in reliable sources. All these victims of offended honor were buried according to the Orthodox rite.