About the Baltics tomorrow and economic hangover after Russian freebies 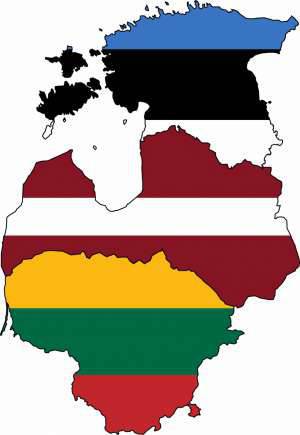 Observing the constant rush from side to side of our Baltic neighbors, I wondered why everything looked so strange. It is illogical. On the one hand, there are constant cries about occupation "in those times" and a demonstration of outright Russophobia, on the other - regular visits to Russia of various representatives from economic structures of different levels.


It turns out that politics is politics, and business is business? Again, it is illogical. Generally, if you do not dig deep, then the logic is difficult to trace. But you can. And in actual fact, the logic is very easy and simple.

It all started not yesterday. I'll start with a little excursion in history. Namely, in the thirties of the last century, when the dark empire of the Soviet Union crushed the proud, but small Baltic states and made them their own republics.

Although about the state - I got excited, yes. The same Lithuania, if anyone is interested, until the time of the final hit in the USSR, changed independence to belonging and back as socks. Well, okay, it's not about that.

And talking about the fact that, as befits an empire, the USSR began to viciously oppress its new acquisitions. And as in these republics absolutely there was nothing from minerals, and there was really nothing to export, then industrialization began. And dozens of industrial facilities were built in the Baltic territories.

Built and launched. And the territories that from time immemorial were backyards and vegetable gardens of other empires, suddenly transformed and began to develop. Developed ...

This was particularly colorful and was presented after the republic once again became independent. That is, after the 1991 of the year. But we will return to the issue of independence a little bit later; an interesting aspect will arise here.

And in Russia it grew only 2 times and made 21,6 thousands of the same American dollars.

It seems that everything is logical and everything converges. "Let loose" states began an independent path of development and demonstration of unprecedented economic growth.

However, let's take a closer look, and due to what the Balts have developed so successfully and raised this very GDP. It is clear that not at the expense of sprats and its powerful agriculture and industry. Own production did not become the strength of the Balts, so that they did not talk about it. Everything looked more than modest, in tons, in rubles or dollars.

And the recent counter-sanctions from Russia hit very hard on this very GDP. Noise and screams from Europe remember everything? Polish apples, Moldovan plums, Belgian pears and so on? Balts were somehow not heard against the general background, although they supplied Russia from 60 to 80 with percent of their agricultural products.

In fact, the Balts, as in the proverb about "A and B", were sitting on the pipe. Not really, of course, on the pipe, but it seems.

The lion's share of the Baltic states' profits now was made up of money received from Russia. That is, in fact, we kept and for the time being we continue to support those who spit diligently in us. Paradox, right?

And everything is simple. Nobody took the ports from the Balts. Luxurious, newly built after the war ports on the Baltic. Through which the turnover was about 100 million tons, for the transshipment of which Russia paid up to 1 billion dollars a year. Billion a little? Maybe.

Watching by whose standards. And by the standards of the Baltic States - quite. Almost 4,5% of the total GDP of Lithuania, Latvia and Estonia taken together for the 1998 year. Then the economy began to grow and here, after the 2000 year. Naturally, Russia's exports also grew, and with it the volume of transshipment in the Baltic ports increased.

And where is the sprats and milk, shock to fill the budgets of the Baltic countries?

By the way, about the pipe. There is a pipe. And Latvia is sitting on it. A huge and modern by the standards terminal in Ventspils. One of two in the USSR, where in addition to oil it was possible to transport, for example, ammonia. Very expensive raw materials, by the way. The second terminal was in Odessa ...

Ventspils pipe allowed pumping over 30 mln. Tons of oil per year. Transshipment cost about $ 0,7 per barrel, and barrels per ton 7,33. Applying the terrible weapon calculator, we get the number in 154 million dollars. And then by the most modest estimates.

By 2009, the total volume of overseas supplies of Russian oil reached 246 million tons, of which 140 million passed through the Baltic ports a year. These are other layouts. This is 700 million dollars. It is weighty, considering that Latvia actually incurred no special expenses on construction. A solid freebie and cash flow from the "occupiers."

It is in other countries, poorer, these figures do not know. And then to Lavrov already lined up with a request for such an occupation. Or to Putin.

Good, pipe. But since there is a port, it means that there is a transshipment of sea containers. Even today, when St. Petersburg, Kaliningrad and Ust-Luga joined the active work, the share of Latvia (Riga, Liepaja, Ventspils) accounts for 7,1% of our container turnover (392,7 thousands of pieces), Lithuania (Klaipeda) - 6,5% (359,4 thousands pieces), Estonia (Tallinn) - 3,8% (208,8 thousands of pieces).

For transshipment of one container take from 180 to 230 US dollars, which for three port owners per year is more than 200 million dollars a year.

But besides oil, coal and containers, the Baltic Sea Russia carries mineral fertilizers, timber, metals. Prior to 2004, about 90% of all Russian sea exports passed through the Baltics, providing countries with at least 18 – 19% of their total GDP. Rail transit should also be added here. He also costs money. For example, in the 2006 year, only one Estonia took on average 32 trains from Russia per day, which only the Tallinn port brought about $ 117 million dollars annually.

And after that, there are still some constant cries about the "Soviet occupation". Wow occupation, the legacy of which gives 30% of the very GDP, which are so boiled in the Baltic States. And constantly talk about some of Russia's debts to the Baltic countries ... Who should owe whom?

Do not forget about the workplaces that Russia provided them in the ports, railway junctions and so on.

Now smoothly turn to the main thesis. And it sounds like this:

Freebie can not be eternal!

All the more frankly anti-Russian.

Today we are witnessing what happened to one country whose rulers believed that, sitting on a pipe to Europe, they could dictate terms. The result is obvious. The pipe will be in another place, and Europe no longer shines the country, because without a pipe it is of no value to itself today for Europe. Alas, but a fact.

It all started not yesterday. Although how to look. I think that the starting point for the end of the Baltic monopolies was 15 June 2000, when the Ministry of Transport of the Russian Federation embarked on a project to build a port in Ust-Luga.

Although it is more correct to speak about the whole program that provided for the priority development of all Russian ports on the Baltic. Thanks to her, Ust-Luga's freight turnover increased from 0,8 mln. Tons in 2004 to 10,3 mln. Tons in 2009 and 87,9 mln. Tons in 2015.

And according to the results of 2014, the Russian ports have already provided 35,9% of the total container turnover in the Baltic, and this figure will only increase.

The use of its infrastructure without customs clearance and foreign exchange operations is more profitable for Russian exporters. And the key word here is your own.

Yes, the legacy of the Soviet Union is to some extent given to us heavily, especially in such matters as the transportation of cargo through the territories of the former Soviet republics. But the transition process has been launched, and, I am sure, in the end, the transport “window to the world” will become Russian on 100%.

This also applies to the fact that some forces in our country indiscriminately talk at all angles about a "gas station country" in which nothing is built except tanks. It turns out being built. And it is built in such a way that the need for Baltic transit falls more and more every day. We can do it ourselves.

Interaction with the Baltic States in transport matters is steadily falling. For rail transport - five times. By container - at four. According to the volume of general cargo - in three. In the 2015 year alone, the transportation of oil and petroleum products through the ports of the Baltic countries fell by 20,9%, hard coal - by 36%, and even mineral fertilizers - by 3,4%. Yes, for mineral fertilizers, the Balts still maintain their positions. While saving ...

And if we take the figures of open sources for the first quarter of 2016 of the year ... Regarding the decrease in turnover in the Baltic ports, there is generally a zrada. Or peremoga, depending on which side to look.

Against the background of this fall in commodity circulation, the frequent visits of representatives of the Baltic economy sector become clear.

They came to their senses ... You can't say otherwise.

The first, oddly enough, figured out in Estonia. They quickly calculated that by the end of the current year about 6 thousand people might be out of work in the Port of Tallinn. And even before 1,2, thousands will have to be cut by rail, of which at least 500 people will be reduced in the next 2 − 3 of the month. In general, in today's realities, the total unprofitability of the Baltic railways as a whole is no longer in doubt. It is clear that passenger transportation will never compensate for the money that “left” along Russian roads to Russian ports.

Finished playing, and congratulations. Then what?

And then sadness and longing in the style of Ukraine. You shouldn’t say it again, but I’ll say: that Ukraine, that the Baltics, all these 20 years of independence lived solely because of Russia's great patience. And patience suddenly came to an end.

And it turned out that we will live without a Ukrainian pipe, and without Lithuanian, Latvian and Estonian ports. Harder, of course, but the process is running. Yes, the situation was such that our side was forced to endure rudeness in response to persuasion and exhortations in the style of "Guys, let's live together!"

Now we will observe, what's next, how will the development process of the mighty economies of the Baltic countries proceed, without support from Russia.

Of course, this is not tomorrow or the day after. I think that in the course of 4-5 years, when the trade turnover between Russia and the Baltic states will approach the level of zero, it will be possible to begin to see the transformations of Latvia, Lithuania and Estonia into their historical state. Namely, in the poor, deaf and, most offensive, far-off farms. Not needed by anyone: neither Russia, nor the USA, nor Europe.

And the fact that we will observe it for some reason does not arise. And, by the way, NATO troops, most likely, will leave the Baltic states. Themselves. For there is no sense in keeping them there. Protecting rusting rails and harbor cranes from Russia is a very expensive and dubious pleasure. And emptying the unwanted territory, whose inhabitants will turn the nuts or something else in Europe.

Hangover from the end of the Russian freebies will be heavy.

Ctrl Enter
Noticed oshЫbku Highlight text and press. Ctrl + Enter
We are
Dig and dig againWhat to do with the refugees? Eastern Europe to host thousands of Africans and Asians
Military Reviewin Yandex News
Military Reviewin Google News
134 comments
Information
Dear reader, to leave comments on the publication, you must sign in.