Modernization of the Russian army: what next?

12 May 2016
52
The newest Russian tank "Armata" continues to attract the attention of military experts and the general public. Uralvagonzavod Corporation, which received an order for mass production of this machine, announced recently that it will probably also produce an “unmanned” version of the Armata, naming such a tank weapons future. 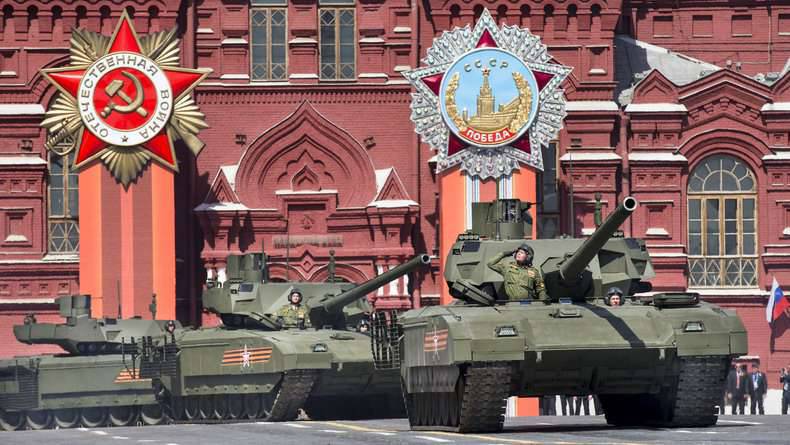 The famous arms factory has some experience in the field of remotely controlled vehicles: it produces a special robotic fire truck based on a combat vehicle tank T-72. In accordance with management plans, serial production of the new Armata tank may begin this year. Now the machine is undergoing field tests.

Uralvagonzavod will be loaded with work in the coming years, as it carries out a number of government orders for the production, modernization and re-equipment of a wide range of military equipment. Among these orders are the T-72B3 tank, the BMP-2 infantry combat vehicle, the Msta-2C19М1 self-propelled howitzer, the BTR-82AM armored personnel carrier, airborne combat vehicles and other products. In total, the plant will supply more than 1400 units of military transport equipment for the Russian armed forces.

Over the past few decades, the American universal military wheeled all-terrain vehicle HMMWV has become a standard by which other military vehicles are judged, because it has been involved in all conflicts involving America across the globe and has shown its ability to withstand any climate and any conceivable terrain.

The Russian military have long sought to create their own alternative, and finally "in 2006, the armored army Tiger SUV was put into service. The Russian automaker GAZ and the Department of Defense are working to adapt the design to domestic and international standards, introducing improvements and preparing the car to compete with American and other Western counterparts.

In 2010, Brazilian law enforcement agencies expressed interest in acquiring the Tiger for their special forces, and at 2013 in Brazil, testing and evaluation of its characteristics were completed for use in major sporting events in 2014 and 2016.

During the upcoming annual military parade of 9 in May, which will mark the 71 anniversary of the victory of the Soviet Union over Nazi Germany in World War II, the Russian armed forces will demonstrate its latest version, the Tigr-M, equipped with a remote combat module with remote management "Arbalet-DM." According to the official representative of the company that produces the “tigers” Sergey Suvorov, Italian combat modules were supposed to be installed on an SUV, however, as a result of the introduction of economic sanctions against Russia, this contract was broken. In addition, “Italian technologies proved to be too fragile for our climate,” while Arbalet has proven itself well at temperatures ranging from -50 to + 50 Co.

According to Suvorov, the Arbalet device is fully stabilized, and its fire control system has the function of capturing and automatic tracking of the target, which allows the operator to conduct effective fire both in a stationary position and during movement. In addition, the machine can, if necessary, be controlled completely remotely. The “Crossbow” module is equipped with two types of machine guns and an automatic grenade launcher, and the operator can switch from one machine gun to another using a computerized fire control system. The future role of the new "tigers" can be guessed from their place in the May 9 parade - they will be accompanied by the Yars mobile missile systems. Based on this, it is logical to assume that the first to receive these new army off-road vehicles will be the Russian strategic rocket forces. "Tigers" will be used to protect mobile launchers and ballistic missiles.

The Kalashnikov Concern, part of the state corporation Rostec, has begun to create a corporate university, which indicates its maturity as a manufacturer of semi-automatic weapons and an export platform. According to Mikhail Nenyukov, deputy director of the concern for the quality and development of production, this decision should help develop the managerial qualities of the company's personnel. According to his statements, such a university will become “a unified system for developing leadership and talents, managerial and production competencies of Kalashnikov employees from the level of a worker to middle and top managers”.

Igor Korotchenko, editor-in-chief of the Russian magazine National Defense, believes that it is necessary to create educational structures in large corporations and enterprises of the country's military-industrial complex: “We have practically no other forms of training skilled workers, so such initiatives can only be welcomed. The defense industry today is the locomotive of the Russian economy, and it is necessary to train personnel for it, especially given the large-scale modernization of production facilities, as well as the emergence of modern equipment with digital control, the introduction of new technologies and materials. ”

It should be noted that in Soviet times, the most talented designers and workers worked in the defense industry of the country, receiving high and stable wages, as well as enjoying an exceptional system of benefits. Today, the Russian defense industry is experiencing serious aging and is facing a “brain drain” in the private sector, and the Russian government is striving to create conditions so that it can train and keep the future generation of highly qualified specialists.

Ctrl Enter
Noticed oshЫbku Highlight text and press. Ctrl + Enter
We are
ARMY-2016. The latest complex of biological protectionUralvagonzavod today is not just a large machine-building plant, but a research and production corporation
Military Reviewin Yandex News
Military Reviewin Google News
52 comments
Information
Dear reader, to leave comments on the publication, you must sign in.