Care of the Turkish Jack: on the consequences of the resignation of Ahmet Davutoglu 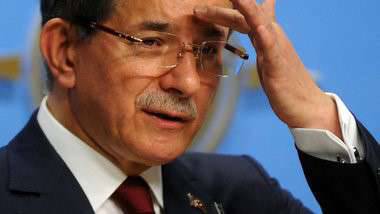 2015 was literally for the Turkish state historical. True, the vector of significance is not the most positive in view of the failed parliamentary elections in June, the Kurdish-Turkish conflict escalated in July, the failures in the Syrian civil war in the fall, the relations with Russia that were burned out (as a result of the downed SU-24 in November) and the many similar erroneous actions in politics the Turkish emperor himself.


The first half of 2016 in Turkey can be described as a state of pre-civil war (especially in the south-east of the country). The severity of the situation is determined by the already shaky Kurdish-Turkish peace agreements violated in the summer of 2015. It is hard to believe that peace between the parties will still be possible. Without the influence of external forces (especially the world powers of the United States and Russia), the situation is unlikely to stabilize. According to the format of Russian assistance in resolving the Syrian conflict, the Kurdish people will also need help.

Considering all the above mentioned negative phenomena in the life of the Republic of Turkey, the situation risks getting worse, thanks to the upcoming resignation of Prime Minister Ahmet Davutoglu.

The created zero problems policy project (zero problems with neighbors) can be considered the most significant result of A. Davutoglu's rule and effective up to a certain point. However, it later acquired the status of a failure. In the previous materials we have analyzed in detail the causes of the collapse of the doctrine (https://cont.ws/post/199379). In short, the reasons are that the program has not been adjusted and has not changed, despite changes in the balance of power in the Middle East + internal political transformations in the republic itself + the progressive neo-Ottoman character of R.T. Erdogan’s policy.

The state of the country drifting towards authoritarianism - this is how the last years of Turkey can be characterized.

The resignation of Premiere will be considered in a four-digit vector.

Davutoglu-Erdogan. According to experts, in recent years, representatives of the country's political elite did not get along. And the reason for the growing imperial tendencies of R.T. Erdogan. The resignation of the prime minister is a kind of a catalyst on the way from point A (parliamentary republic) to point B (super-presidential), from a democratic regime to an authoritarian one, from stability to destability. Ahmet Davutoglu did not accept the position of R.T. Erdogan for two reasons: firstly, the imperial tendency itself — as the experience of recent years in the republic shows — was a mistake and a failure, and the Prime Minister was aware of this, secondly, the planned R.T. Erdogan presidential republic means an increase in the powers of the President and Prime Minister’s passing to the background (in accordance with the current Constitution, the Prime Minister is the most influential person in the country, and the President is rather a ceremonial figure). It is unlikely that the role of a hand puppet would appeal to the pretentious A. Davutoglu. In addition, the leading “Justice and Development Party” received the maximum number of votes in November of 2015, thanks to A. Davutoglu. It is possible that the initiative for resignation came from R.T. Erdogan: full desire to gain control over the Party with Islamist roots, over the Government and over the entire country, embraced by populist ambitions ... the environment to anything. The exception may be the submissive right-handedness of any whim of the President.

Davutoglu-European Union. If R.T. Erdogan wanted to revive the Ottoman caliphate, then A. Davutoglu in this matter was more rational: his plans included political and regional leadership of Turkey and rapprochement with the EU. Instead of the status of the Middle East transit hub, Turkey received a "bunch" of terrorism, a low level of economy and "zero neighbors and a lot of problems." Being an extraordinary adviser to the President since 2002, Ahmet Davutoglu has already been the “architect” of Turkey’s foreign policy oriented towards the European region. He was a kind of conductor between the EU and Turkey, the Mediterranean and the Middle East. It was A. Davutoglu who used the migration factor as a lever of pressure on Germany. Motives: to make Berlin close its eyes to the Turkish terror against the Kurds (authored by RT Erdogan) and ease the visa regime between the countries. The resignation of A. Davutoglu, in my opinion, will postpone the inclusion of the Turkish Republic into the European Community for many decades.

Davutoglu-Russia. The quote of the Turkish Premier himself that he personally gave the order to shoot down the Russian SU-24 aircraft (“I gave the order myself personally”) instantly made him an opponent for the Russian representatives. Perhaps it was the erroneous step that led to the deterioration of geopolitical relations with the Russian state caused the loss of confidence of the President. In addition, it was A. Davutoglu who notified of the possible dispatch of ground troops to Syria, which can be regarded as a denial of the successful results of the Russian Aerospace Forces. The consequences of the Prime Minister’s resignation are difficult to assess for Russia, since disagreements have a top state character (Vladimir Putin - RT Erdogan). At the same time, a lot depends on which figure will come to replace the current head of government. The “Party” congress is scheduled for 22 May.

Davutoglu-Kurdish question. It is known that it was the Prime Minister who dealt with the resolution of the Kurdish issue and the settlement of the aggravated Kurdish-Turkish conflict. And the responsibility for all the obstacles and difficulties of the Kurdish process fell on the Premier. If A. Davutoglu was aimed at bilateral negotiations, in solidarity with international law, then R.T. Erdogan - on an aggressive policy and a military solution to the conflict. During his February speech in the city of Mardin (southeastern Turkey) A. Davutoglu said that the infrastructure destroyed during the anti-Kurd campaign will be restored, compensation will be paid to the injured and the damage will be repaired, repression will be carried out exclusively against "those who have weapon". These words may well be considered a kind of excuse for the repressive actions of R.T. Erdogan. The Kurdish factor is an important and decisive force in the Middle East that can not only determine the results of the civil war in Syria, but also completely change the balance of the Middle Eastern forces. Both in Moscow, and in Berlin, and in the EU this is well understood, supplying Iraqi and Syrian Kurds with weapons. The only country for which the Kurds are the problem is Turkey. And it was A. Davutoglu who was given the task of convincing the world community that the Kurds are terrorists. However, despite the Premier’s anti-Kurdish aspirations, his resignation would have a negative impact on the peace process, since it was A. Davutoglu who managed to mitigate the aggressive pressure of R.T. Erdogan.

Thus, we have considered the possible consequences of the resignation of Turkish Prime Minister Davutoglu on various vectors. Imperial aspirations Erdogan leads to the loss of a trusted entourage: first Abdullah Gul, then Fethullah Gulen, and now Ahmet Davutoglu. The “Turkish Jack” managed to restrain the expansionist ambitions of the Turkish president, and now the lion is released from the cage.