11 May 2016
66
Kim Jong-un was unanimously elected head of the Korea Labor Party. Speaking at a party congress, the leader of the DPRK said that North Korea intends to increase its nuclear arsenal. The meeting participants approved the document, according to which Pyongyang has the right to weapons mass destruction respond to a nuclear threat from other states. At the end of the VII Congress of the WPK on the central square of Pyongyang, a multi-thousand holiday demonstration took place. 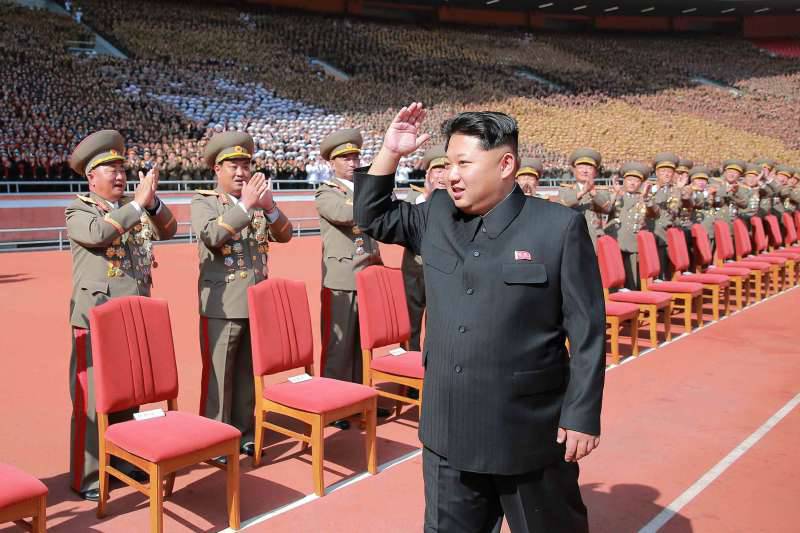 Recall, the Labor Party convention was held for the first time since 1980. Analysts assume that its holding is connected with an attempt to strengthen the power of the young leader. The press was admitted to the event in an extremely limited composition, since freedom of speech in the DPRK does not exist in principle. According to media reports, 180 foreign journalists arrived in Pyongyang to cover the congress, but only 30 people attended the event. Moreover, before entering the hall, they were marinated for several hours with “checks”. What have exhausted members of the press? Few: they were allowed into the meeting room for a quarter of an hour.

The so-called election to the highest party post of Kim Jong-un, applauding delegates of the VII Congress greeted standing. It is also known that so far Kim Jong-un has been registered as the first secretary of the WPK, but now he has become the chairman of the party. If Kim Jong Il was the Secretary General of the WPK, then Comrade. Eun, too young, to have the appropriate authority, until he probably decides to take this post.

Obviously, at one of the following congresses, he will be announced and the general secretary. It is rather difficult to judge anything that is happening in the DPRK, because, apart from propaganda and scant “official statements”, nothing comes from there. Many analysts' guesses are wrong, and the information is fake.

Recall that the VI Congress of the Labor Party, held in 1980, announced a policy of reuniting Korea by creating a confederation while preserving the existing governments.

Speaking at the Seventh Congress, Kim Jong-un actually underlined the continuity of the 1980 and 2016 meetings.

According to the DPRK leader, it is necessary to work on the reunification of Korea. "The TPC prompted all Koreans to fight for national reunification, based on the ideas and lines of independent reunification and the proposal to establish the Democratic Confederative Republic of Koryo, put forward by Kim Il Sung," Comrade quoted. Una RIA News".

In addition, Kim Jong-un called on the northerners to be ready for forceful reunification with South Korea - in the event of aggression against Pyongyang.

“In the people's army, it is necessary to maintain at the highest level the readiness for the reckless military provocations of American imperialism and the South Korean military against our republic, and if the enemies ignite the fire of war, then the aggressors should be mercilessly punished and completed historical the reunification of the motherland, ”reads Kim Jong-un's speech at the TPK congress, published by the Nodon Sinmun newspaper. RIA News".

The leader of the northerners urged to establish an atmosphere in society in which everyone would be ready to begin reunifying the country in the event of aggression against the DPRK. As clarified by Comrade. Eun, the union will take place "at our generation": "The continuation of the national split is more unacceptable, the homeland must be united at our generation."

There is, however, one serious hindrance: the “external forces” of uniting the Korean people are unwilling. But Kim Jong-un knows the answer to this: “In achieving the reunification of the country there can be both a peaceful way and a non-peaceful way. Although we must be ready for any of them, all efforts must be made for peaceful reunification, because we do not want war to break out on Korean soil, and once again the Korean nation has fallen into the flames of war. That is why we insist on reunification in a confederative way. ”

North Korea "faithfully fulfills its non-proliferation obligations and is committed to global disarmament," Kim Jong-un "Moscow Komsomol" with reference to UPI. Tov. The UN assures the world community that the DPRK is developing a nuclear missile program only for the purpose of deterrence. The leader of the North Koreans explained that his country would not abandon the nuclear program unilaterally.

The foreign journalists who were present noted Kim Jong-un's good mood at the festive event held at the end of the congress. The young leader of the North Korean people smiled, waved his arms to the demonstrators, reports TASS.

In the columns of the demonstrators, Koreans dressed in national clothes with bouquets of bright flowers and men in white shirts with ties walked. A mock-up of giant statues of Kim Il Sung and Kim Jong-il were brought to the platform on the square.

Those gathered on the square could observe the living mosaic: according to the signs of instructors, invisible to the public, the slogans glorifying the DPRK, the Workers' Party of Korea and, of course, its leaders, changed.

So, we note, at the last congress, Kim Jong-un was clearly eager to express peaceableness, however, emphasizing the impossibility of abandoning the DPRK nuclear program.

Just recently, an analysis of a number of photographs of the territory of the DPRK, obtained from a private satellite, was conducted. Photos show that Pyongyang may soon conduct a nuclear test.

It is reported RIA News" with reference to the US-South Korean portal "38 North".

The pictures show the movement of vehicles in the area of ​​the proposed command center, located in 6 km south of the Phunheri polygon. According to experts, vehicles rarely arrive at the command center unless preparations are made for testing.

"I consider the policy of the North Korean leadership verified and meeting the interests of the people of the DPRK, which for decades has to withstand massive pressure in the form of sanctions from the West and mainly the United States of America," the DPRK’s nuclear deterrence policy commented. "Free Press" State Duma deputy, deputy chairman of the Communist Party Central Committee Valery Rashkin.

A Communist deputy recalled that the United States is stationing troops in South Korea in quantities that far exceed the limits of defense.

According to Rashkin, North Korea responds adequately to the challenges of its sovereignty. The last statement of Kim Jong-un “only underlines the reasonableness of her position, readiness for a dialogue with everyone in the international arena who do not intend to attack this country.”

The communist expressed confidence that "good neighborly bilateral relations between Russia and the DPRK" should be strengthened, since "this will benefit our two peoples."

It is unlikely, we note, the communist promises of Comrade. Rashkin shares the Russian government.

The other day, the Russian Foreign Ministry drafted a decree that almost completely frozen financial relations with the DPRK in accordance with the UN Security Council resolution. “Take the necessary measures to close subsidiaries in the territory of the Russian Federation, branches or representative offices of DPRK banks, joint ventures with DPRK banks, prohibit equity participation in the ownership of DPRK banks, correspondent relations with DPRK banks during 90 days from March 2 on March 2016 - dates Adoption of UN Security Council Resolution 2270 ", - cites a fresh document "Russian newspaper".

It is also prescribed to take the necessary measures to close within 90 days (counting from 2 March) representative offices and branches of banks and bank accounts in the DPRK, if the Russian Federation has information that gives reasonable grounds to believe that the relevant financial services can contribute to the DPRK’s nuclear ballistic missile programs or programs.

In addition, 6 May at a briefing in Moscow, Russian Foreign Ministry spokeswoman Maria Zakharova said that Moscow fully complies with the requirements of the UN Security Council regarding North Korea.

Such a policy is not at all like the “good neighborly bilateral relations between Russia and the DPRK,” which Rashkin hopes for. Also note that the decision of Russia was predictable. International sanctions against the DPRK did not arise from scratch: Pyongyang repeatedly violated UN resolutions by conducting explosions of nuclear charges and missile launches. Moscow cannot refuse to participate in the policy of international sanctions in the UN. If we assume, for example, that the Saudis declare their nuclear program and tests, Russia, of course, will also support international sanctions in this case. There are no double standards in Russia, as in the United States: what is prohibited by the DPRK will be prohibited by others.