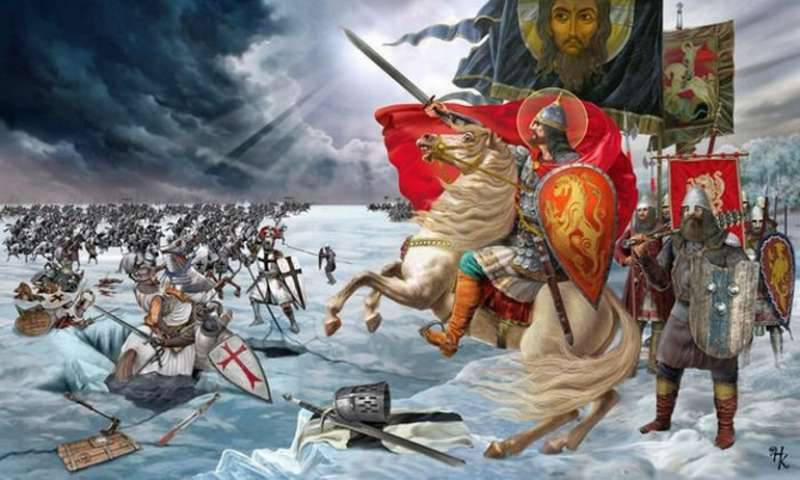 The ideological preparation of aggression is always conducted. Ideology is a kind of “engine of war”: it motivates the military, explains and justifies their cruelty, in other words, invests them weapon in hand. This training is no less important than the production of weapons, otherwise there will be no one to use it.

The situation on the ideological front is becoming aggravated today, and it is time for us to face the truth: The West is conducting ideological preparations for attacking Russia, accusing our country of violating “human rights” and in the absence of “democracy”, and simply declaring “aggressor” for “ polite "salvation of the Russian population of Crimea from the Bandera pogrom. From the fate of Donbass!

A commonplace in Western propaganda was the statement: "Russia defies democratization." If we translate this nonsense into a normal language, the West expresses disappointment over the failure of its attempts to establish control over Russia, to subordinate it to its will. To say this directly is not politically correct, and you have to lie about your highest “democratic values” that Russia does not perceive in any way to devalue it, declare it “uncivilized”, and thereby justify the impending attack.

Essentially, “European values”, they are “democratic values” - they are fake, the same as “communist values”, by the way, both are produced in the West. And, historically, originated from liberal values, it is easy to prove. And they are slightly different from each other, if you think about it.

If we discard the high-pitched propaganda spells, the “European democratic values”, in essence, repeat the slogans of the French Revolution, rewrite in very different ways the very indefinite logical, but sweet word “freedom”. Behind this liberal demagogy it is easy to discover the true European values ​​of today. Let's name some that are in plain sight.

1. Double standard is the main European value. That is, some "standards and values" for domestic consumption, and completely different, opposite, for example, rocket-bomb and "color" operations "to change modes" for export. Starting from the bombing of Yugoslavia, and up to operations on "regime change" in Syria and in Ukraine.

2. Arrogance and vanity, with an offensive taste Charlie Hebdo. For example: “Russia is Upper Volta with rockets, or a gas station with rockets”, and these insults belong to influential politicians of the West, but not to a satirical magazine. After such rudeness, the boor demands the right to impudently impose his only right opinion, because he is "democratic" to other countries, otherwise he refuses to be "civilized and democratic." Ultimately, this “euro value” is also reduced to operations on “regime change” and exemption from the “bloody dictators” of the Upper Volt and Gas Station, on denunciations of their own media. It is only in Russia that the missiles that came from nowhere interfere.

3. Actually, the spiritual “euro values” are today the values ​​of Sodom and Gomorrah, the rights of gay parades and gay man have become the main element of the West’s “human rights” policy, which, under the threat of sanctions, it exports to those still free from Sodom country.

4. “Crocodile tears” - for ideologically “right” victims, when it brings political or economic dividends. They are precisely “crocodile”, because for the “wrong” victims, the West is always silently silent or gives offensive comments in the press, like Charly Ebdo. Compare the attitude to the crash of the Malaysian Boeing over Ukraine and Russia over Sinai - this is heaven and earth. Indignation at the victims of the alleged “Assad regime” and the Russian Aerospace Forces in Syria, and the silence about the crimes of the Kiev Bandera regime, the victims of the “ATO” in the Donbas, ignoring the blatant cases of genocide, like the Odessa Khatyn. As well as the consequences of the operations of the Pentagon in the hospitals of the Red Cross, and the outstanding role in the "fight against the" terror "of the US Guantanamo concentration camp." On the other hand, it is a kind of “double standard” value.

5. Technological advances are the only attractive values ​​of the West, however, they are material, not spiritual and moral, and it is the latter that justifies their “right to lead” the West. The advantage in the technologies of the West is historically determined; they have been developing for a long time in other countries, including Russia. At US universities, the majority of students today are from China, India and other "developing countries", the Americans themselves prefer to work as DJs on the radio. By the way, it was precisely at the expense of this value that Hitler hoped to defeat Russia; Today in his footsteps are strategists from Washington.

Chief of Staff of the US Armed Forces, Mark Millie, directly called Russia "the aggressor." From this it follows that the military in the United States has political power, perhaps even more than the current president, or anonymous government circles in the United States who stand behind the military. In essence, the USA is a kind of anonymous dictatorship of a group of individuals, Obama is a fake president. “Do not pay attention,” Secretary of State Kerry once told Foreign Minister Lavrov about his President Obama at a 20 meeting ...

The first statement was made by the newly appointed commander of the NATO forces, American General Kurthis Scaparotti, who replaced the scandalous Philip Breedlove: "if Russia cannot be intimidated, he is ready to fight with her." The self-exposing statement is actually telling what NATO actually does in relation to Russia: it is frightening. (By the way, the “terror” in translation into Russian is “intimidation.”) As the hybrid world war between the USA and Russia is already underway, it is obvious that Mark Milli and his subordinates are preparing for the “hot phase”.

Obviously, it’s time for Russia to respond on the merits to the "intimidation" of the West. We can recognize the countries that call the winners of Hitler a “totalitarian” or “authoritarian” regime as neo-fascist regimes under the democratic mask, under which the Hitler regime acted. Since Hitler blamed the “Stalinist Russia” for the first time, the “Western democracies” simply repeat after him.

It is time to remember that fascism was a pan-European and all-Western phenomenon, and not just German or Italian, it was born by Western democracy, a western national state. Apparently, the grains of fascism are permanently present in the Western "democratic civilized" society, and now they germinate again.

In fact, fascism is the “value of superiority” on some basis. Hitler used the racial trait, today Western neo-fascists use the sign of "cultural and democratic" superiority over the putinoids, Colorado and "developing countries and democracies."

It is time to say that the “policy of democratization” is a policy of subordination of independent countries to the West. The West subordinated the relatively independent - “multi-vector” post-Soviet Ukraine, “euro-associated” with the help of the Nazi-Bandera, so they are democrats for the West, albeit neo-fascists.

By supporting Bandera fascism in Ukraine, Washington showed its real face. And it turned out to be quite neo-Fascist: tell me, as they say, who is your friend ... But he acted "unprofessionally", according to President Putin, by initiating a "regime change" on Russia's borders, possibly due to Brzezinski's "genius". This "gray cardinal" of Washington hoped that Russia would get bogged down in Bandera Ukraine, like the USSR in Afghanistan. However, instead, Washington consolidated Russia, instilled it from the neo-fascist tumor of Maidan, and stimulated the unification of a non-Western world around Russia.

Washington’s ideological preparation for the war against “Putin's Russia” says that Washington can at any time commit a perfidious attack on Russia, as Hitler did in relation to “Stalinist Russia”. Because he prepares an ideological justification for his perfidy, like Hitler.

The chance to prevent the Third World War is, perhaps, Donald Trump, today he is the only major politician and presidential candidate who explicitly speaks of the need to respect the interests of other countries of the world, primarily Russia and China. If he wins ... And if he does not suffer the fate of John F. Kennedy, who also advocated the normalization of US relations with the USSR-Russia ...

I'm fighting for the "Russian world"
Third year,
On the fronts of the Internet war,
Behind the post - the post ...

As the shells of the article fly,
Thoughts are torn like mines,
In the civilian after all,
And former relatives ...

Infoboy boils till morning
There is no loss ...
Only dizzy
And the soul hurts ...