Warrior with a baby in her arms 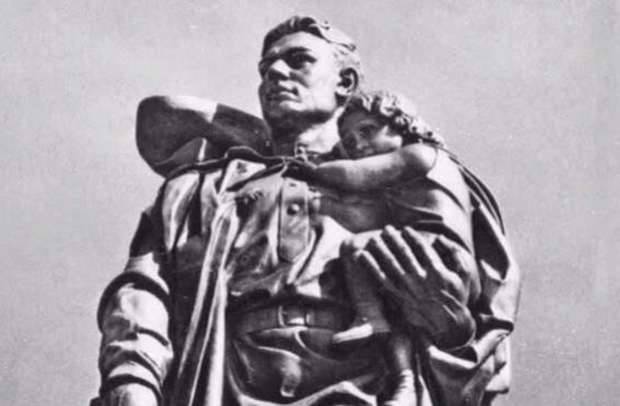 30 April 1945, senior sergeant Nikolai Masalov, risking his life, carried a German girl out of the fire, which became the plot of the monument to the Soldier-Liberator in Berlin

The monument in Berlin's Treptow Park is widely known not only in our country and not only in Germany. But not everyone knows that the idea of ​​the monument was suggested by the real история, which occurred at the very end of the war in the Tiergarten - one of the central regions of the German capital.

It happened during the fighting for the capture of Berlin. The soldiers of the 79 Guards Rifle Division as part of the 8 Guards Army Colonel-General Vasily Ivanovich Chuikov went to the channel, behind which were fortified enemy positions that defended Hitler’s headquarters and the main communications center of the German fascist troops. In his post-war memoirs, V.I. Marshal of the Soviet Union Chuikov wrote about this place that "the bridges and the approaches to them are heavily mined and tightly covered with machine-gun fire."

Silence reigned shortly before the decisive attack. And suddenly in this silence the cry of a child who called his mother sounded. The cry of the regiment-bearer, senior sergeant Nikolai Masalov, heard the children's cry. To get to the child, it was necessary to cross the square, stuffed with mines and completely sweep of cannons and machine guns. But mortal danger did not stop Masalova. He appealed to the commander with a request to allow him to save the baby. And guard sergeant crawled, hiding from the fragments and bullets, and finally got to the child. Nikolai Ivanovich Masalov later recalled: “Under the bridge, I saw a three-year-old girl sitting beside her murdered mother. The baby had blond, slightly curled hair at the forehead. She tugged at her mother by the belt and called: "Mutter, Mutter!". There is no time to think about it. I'm a girl in an armful - and back. And she howled! I am on the move and so, and persuade the commercials: shut up, they say, and then you open me. Here the fascists began to burn. ” Then Masalov said loudly: “Attention! I'm with a child. Cover me with fire. Machine gun on the right, on the balcony of the house with columns. Shut his throat! .. ”. And the Soviet soldiers responded with heavy fire, and then the artillery preparation began. Under the cover of this fire, Sergeant Masalov unscathed reached his own and transferred the rescued child to the regimental headquarters.

In August 1946, after the Potsdam Conference of the anti-Hitler coalition, Marshal Clement Voroshilov had the idea to create a memorial in Berlin's Treptow Park, where the Soviet soldiers were buried around 7000. Voroshilov told about his proposal to a wonderful sculptor, a former war veteran Evgeny Viktorovich Vuchetich. I must say that they were well acquainted: in 1937, the sculptor received the gold medal at the World Art and Industry Exhibition in Paris for the sculptural group "Clement Voroshilov Riding".

As a result of the conversation with Voroshilov, Vuchetich had several versions of the monument. One of them was a figure of Stalin, holding in his hands the earthly hemisphere or the image of Europe. But then Yevgeny Viktorovich remembered the cases when our soldiers were saved from death by our soldiers, and one of such cases - the feat of senior sergeant Nikolai Masalov - was told to him by V.I. Chuikov. These stories inspired Vuchetich to create another option, with a soldier holding a child on his chest. At first it was a soldier with a PPSh machine gun. Both options were seen by Stalin, and he chose the figure of a soldier. Only insisted that the automat replace more symbolic weapons - a sword that cuts through the fascist swastika.

Monument to the Liberator Soldier was made in 1949 in Leningrad at the plant "Monumental Architecture". Since the sculpture with a height of 12 meters weighed more than 70 tons, it was delivered to the place of installation in a disassembled form in six parts by water. And in Berlin, 60 German sculptors and two hundred stonecutters worked on the manufacture of individual elements of the monument. In total, 1200 workers were involved in the creation of the monument. Monument to the Liberator Soldier was solemnly opened on May 8 on May 1949 by the Soviet commandant of Berlin, Major General Alexander Georgievich Kotikov.

In 1964, East German journalists tried to find the girl who was saved by Senior Sergeant Masalov. Materials about this story and search reports were published by the central and many local newspapers of the GDR. As a result, it turned out that N.I. Masalova was not the only one - it became known about the many cases of the salvation of German children by Russian soldiers.

The monument in Berlin's Treptow Park reminds of the true character, humanism and strength of the spirit of the Russian soldier-liberator: he did not come to avenge, but to protect children whose fathers brought so much destruction and grief to his native country. The poem of the poet Georgy Rublev “Monument” dedicated to the soldier-liberator says this with poetic force:

"... But then, in Berlin, under fire
Crawling fighter, and body obscure
Girl in short white dress
Cautiously taken out of the fire.

... How many children have returned childhood
Gave joy and spring
Ordinary Soviet Army
People who won the war! ”