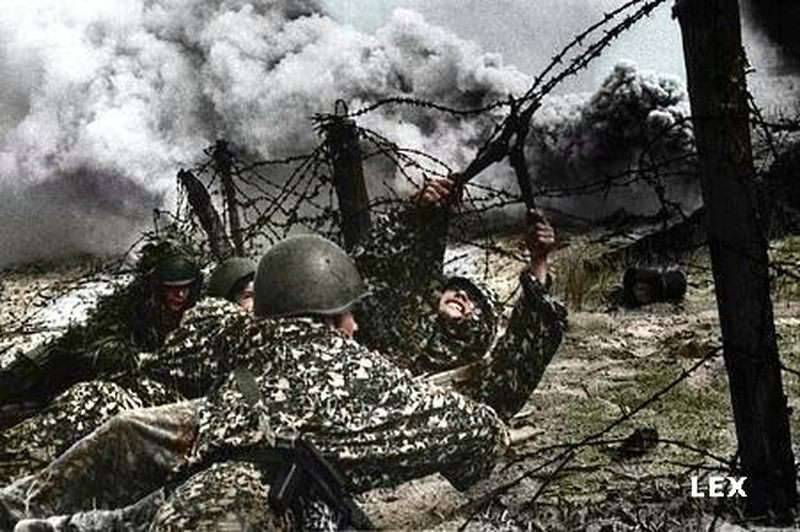 In his first battle with the Nazis, Vasily Nikitovich Simbirtsev entered the difficult days of August forty-two on the Stalingrad front. Fearless and determined, he quickly became a good scout. Despite any difficulties, together with his comrades, Vasily Simbirtsev delivered valuable information about the enemy. Thus, in the period of the Stalingrad battle, he captured about two dozen “tongues”. The command highly appreciated his merits. The first military awards - the Order of the Red Star and the medal “For Courage” - flashed on the chest of the brave scout.

July 1943 The height of the Battle of Kursk. At the turn, the Postnikov farm, the village of Blizhnyaya Igumenka (northwest of Belgorod), units of the 282nd Guards Rifle Regiment, Lieutenant Colonel N. Studenikin, the 92nd Guards Rifle Division, subjected to fierce artillery and mortar shelling, reflected massive motorized infantry strikes and tanks the adversary. 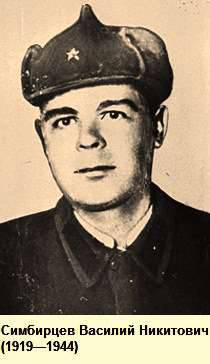 From the testimony of a prisoner - an officer of the 7 th tank division of the Nazis - the regimental commander learned that a flamethrower unit had arrived to replenish this division. Reported German and the approximate place of their concentration. The information caused serious concern. In the evening of July 7, the regimental commander ordered the guard to senior sergeant Simbirtsev to penetrate the enemy rear and find the whereabouts of the enemy flamethrower tanks. Simbirtsev took with him guard soldiers P. Kharchenko, B. Diulin and A. Simonyak.

On the night of July 8, the scouts went into search. They secretly penetrated into the rear of the enemy's 7 Panzer Division. It was difficult to navigate in the dark, but Vasily Simbirtsev's great experience helped. Exhausted by three-day battles, the Nazis slept. Only here and there the scouts noticed the sentries. Yes, and they did not differ special vigilance.

At the edge of a small forest near the village of Yastrebovo Guard, senior sergeant Simbirtsev discovered a cluster of tanks (later the captured sentry named their exact number 32). They were not even covered with camouflage nets. Carefully looking at the tanks, Simbirtsev determined - flamethrower. Such machines he had to see in the days of the Battle of Stalingrad.

Getting close, the scouts continued to observe. Determined that the crews are sleeping inside the cars, hiding from the rain. Only two sentries, who were in different places, were awake. A little distance from the others stood several heavy tanks and assault guns, Simbirtsev decided to capture one of the sentries. He took it upon himself, and private soldier B. Diulin became his hedge. Hiding in the thickets of small bushes, Vasily crawled up to the sentry and with a strong blow stunned him. It took seconds to put a gag in his mouth and tie his hands tightly. 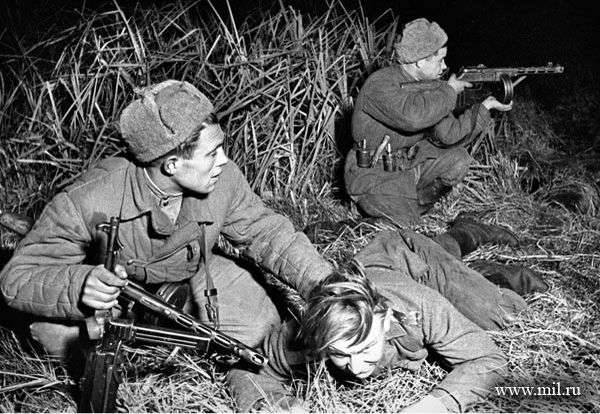 Even before the dawn of the guard, senior sergeant Simbirtsev with his group returned to the regiment's location and reported to the commander about the task. The captured chief corporal confirmed the intelligence information and said that next to their company were two tank battalions, in which "tigers" and "panthers" predominated. Intelligence data was used to strike artillery with enemy artillery and aviation.

In the first days of August, forty-three, the 282 Guards Rifle Regiment entered the approaches to the village of Kobzevka (Kharkiv region). The enemy has turned him into a powerful stronghold. The firing points of the enemy were carefully masked. Simbirtsev received the task - to deliver to the regiment of the "language", who would know well the defense system of this village.

At night, a small group of scouts led by V.N. Simbirtsev reached the outskirts of the village. Approaching the house, next to which was a passenger car, Vasily immediately realized that here they would find what they needed. Private guard Peter Kharchenko noticed near the house of the sentry, as he informed the commander. Simbirtsev ordered to remove the fascist.

The scout took out the dagger from the scabbard and crawled to the house. Here the sentry came up to a tree, where Kharchenko stood next to him in the grass. The fascist, not noticing anything suspicious, turned his back on him, intending to go back. This was what the Soviet soldier expected. He jumped up noiselessly and, holding the fascist’s mouth, stabbed him with a knife. Simbirtsev with two scouts broke into the house. In it, they found a firmly sleeping German officer. He did not have time to wake up, as he was bound. Without having caused the slightest alarm among the enemy, the reconnaissance team moved towards the front line, taking the enemy captain with them. His field bag with maps and important operational documents took Simbirtsev. When the regiment commander received these cards, the layout of the enemy defensive area became clear. The prisoner added information with his testimony. 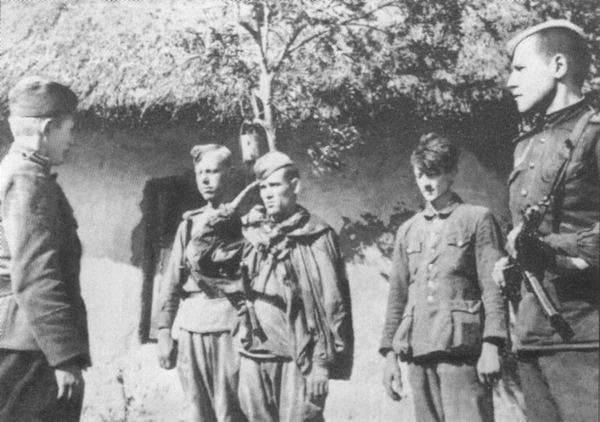 By the end of 26 September, the 1943 regiment had fought to the Dnieper near the village of Kutsevolovka, southeast of Kremenchug. Simbirtsev was tasked with scouting a convenient place to force the Dnieper. On the night of September 27, Vasiliy Simbirtsev, struggling with the current, swim by swimming to an island with an 60,8 mark, located near the right bank. No one was on it. Scout managed to find a ford, going from the island to the right bank. Not having rested a minute, Simbirtsev went to the shore. Reaching him, he silently climbed out of the water, took out a uniform from a waterproof bag, got dressed and slowly began to move forward.

Soon the scout stumbled into a trench on a German soldier, struggling with sleep. Immediately having finished the enemy, Vasily took his greatcoat, pod and put it on himself, and hung the machine gun on his chest. The corpse pulled away and hid in the bush. Vasily had a good command of the German language. He managed to eavesdrop on the password that the sentries exchanged. And now, dressed in fascist uniforms, he boldly went through the trench. As a result of the guard, the senior sergeant was able to obtain very important information about the system and the nature of the enemy fortifications in this area.

On the way back the guardsman was lucky. In the coastal reeds, he found a small boat, returned safely to his home part, and immediately reported back to the command obtained, extremely important, reconnaissance data. October 19 1943, the commander of the regiment of the guard Lieutenant Colonel N. Studenikin signed the award list on the senior sergeant VN Guards. Simbirtseva, in which he petitioned to confer him the title of Hero of the Soviet Union. December 20 1943 of the Year The Presidium of the Supreme Soviet of the USSR awarded Vasily Nikitovich this high rank.

Each reconnaissance search Simbirtsev prepared in advance, paying the most serious attention to the choice of place, determining the composition of the group and its preparation, clearly distributed responsibilities among subordinates, never forgot about disguise. Here is one example of the results of careful preparation. V.N. Simbirtsev received an order to take the "language" from the German military escort. The security bunker was connected to the first trench by a continuous course of communication. All approaches were mined. Duty guard soldiers carried only at night. Simbirtsev established this after careful observation of the behavior of the enemy.

Before performing the task, Vasily Nikitovich held a dress rehearsal for the upcoming search. For this purpose, a section of the terrain was specially selected and equipped, similar to the one where it was planned to act. Simbirtsev taught the scouts by personal example, strictly watching that the soldiers acted deftly, quickly and in concert. The commander of the group on the move eliminated the identified shortcomings.

When the training was over, the chief of intelligence of the regiment, Hero of the Soviet Union, E.I. Nagaev checked the actions of the guards. There were no comments. An intelligence group of eight people arrived at the front line in the evening. At dusk, the scouts first took down their mines, and then the German ones, and crawled to the bunker. As they expected, the Nazis were not there yet. Calculation Simbirtseva justified. By his order, four people lay down at the entrance, and the rest, including himself, entered the bunker.

Twenty minutes later he heard footsteps, someone else's speech. Soon, two German soldiers entered the bunker with a light machine gun. The scouts from cover closed the door. The Nazis were trapped under the gun of four guards. Simbirtsev stepped forward and told enemies in German that resistance was useless. Those immediately raised their hands.

So, without firing a single shot, without loss, the scouts took two "tongues". As it turned out, the Germans only found out in the morning about the disappearance of their escort and decided that their soldiers had deserted.

Unfortunately, the Hero of the Soviet Union, Vasily Nikitovich Simbirtsev, did not manage to survive until Victory Day. Performing the next task, he died in battle. It happened on the night of January 24, 1944, on the outskirts of Krivoy Rog. With a group of scouts V.N. Simbirtsev went to capture the "language". The guards into the first trench of the enemy penetrated silently. In the dark were the silhouettes of two soldiers standing by a machine gun. The Nazis smoked and talked about something animatedly. 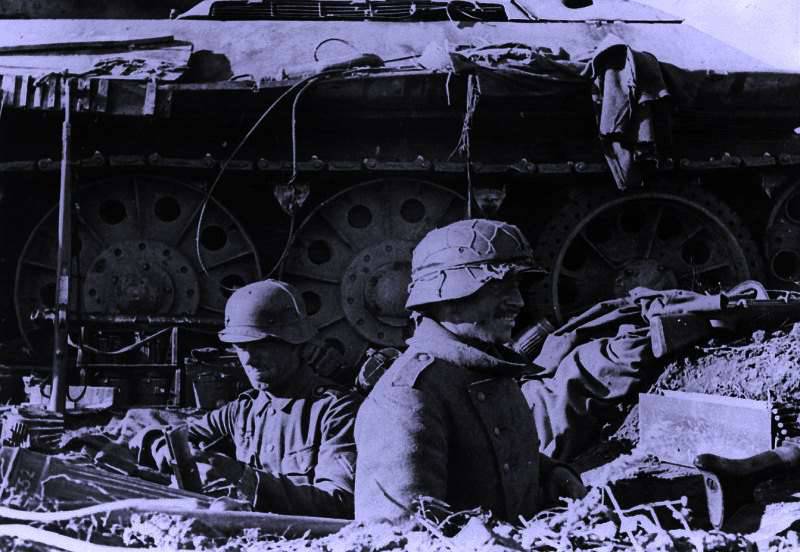 Simbirtsev decided to simultaneously capture them both. Scouts had to act in a similar situation before. Therefore, each of them knew who and what to do. From the unexpected appearance of Soviet intelligence officers from two sides, the Germans were confused and did not have time to resist. But their observer, who was nearby, noticed, apparently, something was wrong and hurried to the location of the machine-gun crew. “Johann, Johann!” He anxiously called out to one of the machine-gunners. Having not heard the answer, the nazi raised his hand with a rocket launcher. And although intelligence officer Maksut Khaydarov managed to hit him on the head with the butt of a machine gun, the German managed to launch a rocket.

The scouts did not overcome even half of the neutral zone, as strong fire fell on them, it became light from a multitude of rockets, as if in the afternoon. Having ordered three of his fighters to deliver the “tongues” at all costs, the Simbirtsi lay down with the others and opened fire, hoping to divert attention from the prisoners and the guards accompanying them. The machine gunner of the guard senior sergeant was mortally wounded. Comrades could not help him. 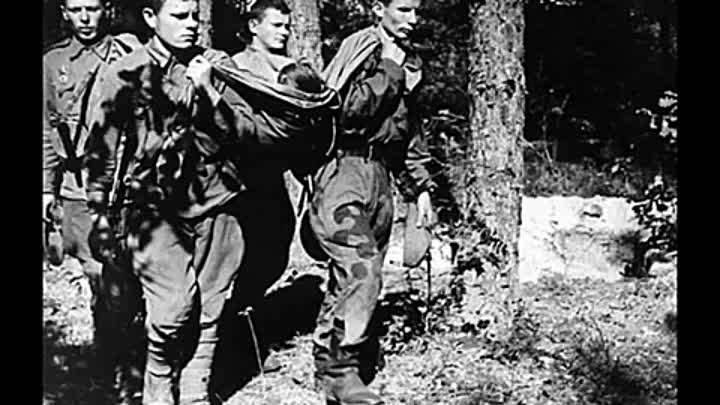 10 February 1944, the commander of the 92 Guards Rifle Guard Division, Colonel A.N. Petrushin and the head of the political department of the Guard Lieutenant Colonel M.F. Skvortsov wrote in a letter to the hero’s brother Alexei Nikitovich Simbirtsev: “It’s hard to accept the thought that Vasily Simbirtsev is no longer among us - a brave, brave scout who has gone through all the trials of fierce battles with Hitler’s invaders. With the enemies of the motherland, he was merciless. We saw it in his every deed, action, in his every combat feat ”.

The name of the brave scout V.N. Simbirtseva is immortalized in the name of one of the streets of Saratov. In Krivoy Rog, a monument was erected on the tomb of the hero.

Ctrl Enter
Noticed oshЫbku Highlight text and press. Ctrl + Enter
We are
"Fire arc". Day of the defeat of the German troops by the Soviet troops in the Battle of KurskMyths of the Great Patriotic. Papier mache helmet
Military Reviewin Yandex News
Military Reviewin Google News
8 comments
Information
Dear reader, to leave comments on the publication, you must sign in.