April 16 2016
28
If anyone showed an example of skillful maneuvering and the finest diplomacy in World War II, it was Turkey. As is known, in the 1941 year, Turkey declared its neutrality and strictly followed it throughout the war, although it was under tremendous pressure from both the Axis countries and the anti-Hitler coalition. In any case, Turkish historians say so. However, this is only the official version, strongly diverging from reality. 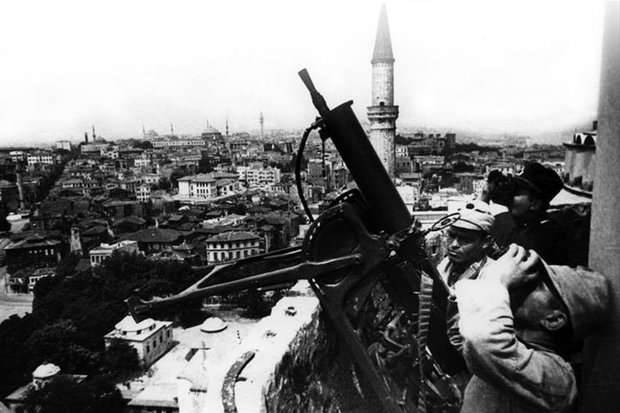 MG 08 machine guns on the minaret of Ai Sophia in Istanbul, September 1941. Photo from ru.wikipedia.org
But the reality was quite different - during the 1941-1944 years. Turkey actually stood on the side of Hitler, although the Turkish soldiers did not shoot a single shot at the side of the Soviet soldiers. Or rather, they did it, and not just one, but all of this was classified as “border incident”, which looked like sheer trifles against the background of the bloody battles of the Soviet-German front. In any case, both sides - Soviet and Turkish - did not react to border incidents and they did not cause far-reaching consequences.

Although for the period 1942-1944. skirmishes at the border were not so rare and often resulted in the death of Soviet border guards. But Stalin preferred not to aggravate relations, since he perfectly understood that if Turkey entered the war on the side of the Axis countries, the position of the USSR from the unenviable could instantly turn into hopeless. This was especially true in 1941-1942.

Turkey did not force the events, remembering well how the participation in the First World War on the side of Germany ended for it. The Turks did not rush headlong to rush into another world massacre, preferring to watch the fight from afar and, of course, to extract the maximum benefit for themselves.

Relations between the USSR and Turkey before the war were fairly even and stable, in 1935 a treaty of friendship and cooperation was extended for another ten-year term, and with Germany, Turkey signed a non-aggression treaty of 18 in June of 1941. Two months later, after the start of the Great Patriotic War, the USSR declared that it would continue to comply with the provisions of the Montreux Convention governing the rules of navigation in the Bosphorus and Dardanelles. And also has no aggressive plans against Turkey and welcomes its neutrality.

All this allowed Turkey to refuse to participate in a world war on completely legal grounds. But it was impossible to do this for two reasons. Firstly, Turkey owned a tormenting area that was strategically important for the warring parties, and, secondly, the Turkish government was going to remain neutral only until a certain moment. What it, in fact, did not hide, at the end of 1941 of the year, approved the law on conscription for senior recruits, which is usually done on the eve of a major war.

In the autumn of 1941, Turkey transferred divisions to the border with the USSR 24, which forced Stalin to strengthen the Transcaucasian Military District 25 with divisions. Which were clearly not superfluous on the Soviet-German front, given the state of affairs at that time.

Since the beginning of 1942, the intentions of Turkey were no longer in doubt among the Soviet leadership, and in April of that year they were transferred to Transcaucasia. tank corps, six aviation regiments, two divisions, and on May 1, the Transcaucasian Front was officially approved.

In fact, the war against Turkey was to start from day to day, since 5 in May 1942, the troops received a directive on readiness to launch a preemptive attack on Turkish territory. However, the matter did not go as far as fighting, although the delay by Turkey of significant forces of the Red Army noticeably helped the Wehrmacht. After all, if the 45 and 46 armies were not in the South Caucasus, but participated in the battles with Paulus's 6 army, it is not yet known what kind of "successes" the Germans would have achieved in the summer campaign of 1942.

But much more damage to the USSR was caused by the cooperation of Turkey with Hitler in the economic sphere, especially the actual opening of the Torrential Zone for the ships of the Axis countries. Formally, the Germans and Italians kept propriety: when the passage of the straits, military sailors dressed in civilian clothes, the weapons from the ships were removed or disguised, and it seemed there was nothing to complain about. Formally, the Montreux Convention was observed, but at the same time not only German and Italian merchant ships, but also combat ships, freely floated through the straits.

And soon it came to the point that the Turkish navy began to escort transports with cargoes for the Axis countries in the Black Sea. Practically, partnership with Germany allowed Turkey to earn good money on supplies to Hitler not only products, tobacco, cotton, iron, copper, etc., but also strategic raw materials. For example, chromium. The Bosphorus and the Dardanelles became the most important communication of the Axis countries fighting against the USSR, who felt in the Pouring Zone, if not like at home, then definitely like visiting close friends.

But rare Soviet ships fleet walked through the Straits in fact, as if to be shot. Which, however, was not far from the truth. In November 1941, four Soviet ships - an icebreaker and three tankers - it was decided to transfer from the Black Sea to the Pacific Ocean in view of their futility and so that they would not become victims of German dive bombers. All four ships were civilian vessels and had no weapons.

The Turks freely let them through, but as soon as the ships left the Dardanelles, the tanker Varlaam Avanesov got a torpedo from the German submarine U652, which is a coincidence! - It turned out to be exactly in the path of the Soviet ships.

Whether German intelligence quickly worked, or “neutral” Turks shared information with partners, but the fact remains that “Barlaam Avanesov” still lies at the bottom of the Aegean Sea 14 kilometers from the island of Lesbos. The icebreaker "Anastas Mikoyan" was more fortunate, and he was able to escape from the pursuit of Italian boats near the island of Rhodes. The icebreaker was saved only by the fact that the boats were armed with small-caliber anti-aircraft guns, which were quite problematic to sink the icebreaker.

If the German and Italian ships ran through the Straits, as if through their entrance yard, carrying any cargo, the ships of the countries of the anti-Hitler coalition could not bring not only weapons or raw materials into the Black Sea, but even products. Then the Turks immediately turned into angry Cerberus and, referring to their neutrality, forbade Allied ships to go to the Black Sea ports of the USSR. So we had to carry cargo in the USSR not through the Straits, but through far Iran.

The pendulum swung back in the spring of 1944, when it became clear that Germany was losing the war. At first, the Turks reluctantly, but nevertheless yielded to the pressure of England and stopped supplying German industry with chrome, and then began to more closely control the passage of German ships through the Straits.

And then an incredible thing happened: in June 1944, the Turks suddenly “discovered” that not unarmed German ships, but military men, were trying to get through the Bosphorus. The conducted inspection revealed hidden in the holds weapon and ammunition. And a miracle happened - the Germans Turks banally "turned" back to Varna. It is not known what phrases Hitler released to the address of the Turkish President Ismet Inonu, but they were all certainly not parliamentary.

After the Belgrade offensive operation, when it became clear that the German presence in the Balkans was over, Turkey behaved like a typical scavenger, who sensed that yesterday's friend and partner would soon give up the ghost. President Inonu broke off all relations with Germany, and on February 23 of 1945, the belligerent spirit of the Sultans of Mehmet II and Suleiman the Magnificent clearly descended on him - Inonu suddenly took over and declared war on Germany. And along the way - what could it be to waste time on trifles, fight like that! - The war was declared and Japan.

Of course, not a single Turkish soldier took part in it until the end of the war, and a declaration of war on Germany and Japan was an empty formality that allowed Hitler’s partner Turkey, to commit a cheat, and stick to the victor countries. Avoiding serious problems along the way.

There is no doubt that after Stalin had dealt with Germany, he would have a weighty reason to ask the Turks a number of serious questions that could end, for example, with the Istanbul offensive operation and with the Soviet landing force on both sides of the Dardanelles.

Against the background of the victorious, colossal combat experience of the Red Army, the Turkish army did not even look like a whipping boy, but as a harmless boxing bag. Therefore, it would be finished in a matter of days. But after February 23, Stalin could no longer take a war to an “ally” in the anti-Hitler coalition. Although, do it a couple of months earlier, neither England nor the United States would strongly protest, especially since Churchill, at the Tehran Conference, did not object to the transfer of the Strait Zone of the USSR.

One can only guess how many vessels, both commercial and military, of the Axis countries passed through the Bosphorus and the Dardanelles in 1941-1944, how much raw materials Turkey supplied to Germany and how much it extended the existence of the Third Reich. Also, one never knows what price the Red Army paid for the Turkish-German partnership, but there is no doubt that the Soviet soldiers paid for it with their lives.

Virtually the entire war, Turkey was Hitler’s non-military ally, regularly fulfilling all his wishes and supplying them with what is possible. And if, for example, Sweden can also be blamed for supplying iron ore to Germany, then Turkey can be reproached not so much for trading cooperation with the Nazis, as in providing them with the Torrential Zone - the most important global communication. Which in wartime has always acquired and will acquire strategic importance.

The Second World War and the Turkish "neutrality" once again proved what was well known since the Byzantine times: without owning the Straight Zone, no country in the Black Sea-Mediterranean region can claim to be a great one.

This fully applies to Russia, which collapsed in 1917, largely due to the fact that the Russian tsars did not take control of the Bosphorus and the Dardanelles in the 19th century, and in World War I, it was badly planned - if you can call it that. landing operation in the Bosphorus.

In our time, the problem of the torrential zone has not become less urgent and it is possible that Russia will face this problem more than once. One can only hope that it will not have such fatal consequences as in 1917.

Ctrl Enter
Noticed oshЫbku Highlight text and press. Ctrl + Enter
We are
Diplomats of the People's Commissariat of Defense: on the eve and during the warMyths of the Great Patriotic. Papier mache helmet
Military Reviewin Yandex News
Military Reviewin Google News
28 comments
Information
Dear reader, to leave comments on the publication, you must sign in.