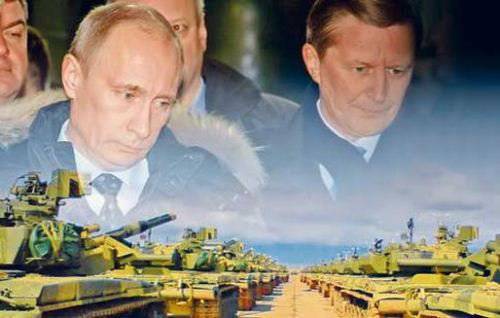 The program for the purchase and development of military equipment for the Russian army, adopted at 2006, was not implemented at all points. Therefore, the Government was forced to adopt 24 February 2011, the new program GW-2020.

But if you do not take into account the reasons for the failure of the previous HPV-2015, the state defense order may be disrupted this time.

In 2006, it was planned to finance the re-equipment of Russian power structures worth over 4 trillion rubles. About 75% of this amount was planned to be spent on the purchase of new military equipment in almost the entire range of weapons:

The main reason for the disruption of government procurement of weapons became the contradictions between the industrialists (Suppliers) and the Ministry of Defense (Customer).

Position of the suppliers.

A wonderful new tank support vehicle (code name “Frame”) has been created at the Urals factory. As tests have shown, it effectively hits tanks, helicopters, low-flying aircraft and virtually any highly protected targets. Uses the anti-tank missiles "Attack", controlled by a laser beam. One BMPT is capable of covering three tanks in battle. The machine is exported only. The Russian army, it was not claimed.

In preparation for the international exhibition at the Nizhny Tagil proving ground, a rehearsal of samples of military equipment planned for the show was held. All Russian armored vehicles and cars have passed the test without comment, but the Italian “Lynx” is firmly stuck in the test strip obstacles. And when this foreign model was shown to the Russian prime minister, an Italian armored car did not pass the test track, but drove along with it, which can be safely described as a fraud. Despite this embarrassment, officials of the Ministry of Defense continue to insist on the purchase of this "parquet" military equipment. At the same time, on a proactive basis, machine-makers from Arzamas created an armored car (Tiger-6), which by security is much higher than the Italian model. The proposal of the Ministry of Defense specialists to carry out the licensed assembly of the Italian model LMV M65 at KAMAZ is not sustainable, since the assembly uses parts and spare parts from different manufacturers: Italian-made units, German and Dutch armor, American engines, and obtaining all necessary licenses from foreign manufacturers is problematic . The acquisition by the Ministry of Defense of the Russian Federation of the Russian armored vehicle "Tigr" is the least expensive and profitable deal for the industrial-military complex of Russia. The approval of representatives of the Russian Defense Ministry on the use of technology of the Italian armored car to create a Russian promising model of the Boomerang armored personnel carrier does not hold water, since it is a question of military equipment not only of different classes, but also of purpose.

A difficult situation has arisen with the delivery of military equipment to the army. Without waiting for the completion of the Russian “Warrior” kit, the Ministry of Defense is considering the possibility of acquiring French-made kits. According to the information received from open sources, the Russian development has better characteristics than foreign equipment, in terms of weight, communication range, accuracy of establishing coordinates, battery life, availability of a search mode.

The initiative of the Novosibirsk instrument-making plant did not receive support from the Ministry of Defense; weapons using the latest research scientists in the field of thermal imaging technology.

Arms manufacturers reasonably believe that, due to unsystematic and ill-conceived reforming of the army, there is a situation when there are no specialists in the Ministry of Defense capable of competently preparing and approving tactical and economic documentation for creating samples of new equipment. In this connection, the military officials have "great love" for foreign military equipment. Thus, they are trying to hide their miscalculations and their inability to create a constructive and effective approach to the implementation of the state rearmament program. This leads to the fact that promising developments are not funded, and the available latest or successfully modified domestic equipment is subject to unreasonable criticism.

Ministry of Defense officials are not fulfilling the presidential instructions to restrict the purchase of foreign-made military equipment. The acquisition of non-Russian equipment in a small volume should be carried out only in order to familiarize the Russian military with the equipment of foreign armies.

The conclusion of a contract for the construction of a combat training center worth more than 100 million euros with a German company deprived Russian organizations of a profitable order, which could perform this task better than a foreign contractor. The use of budgetary funds to support foreign manufacturers and contractors during the global financial crisis is aimed at the destruction of its own defense industry complex. AT stories There have been cases in Russia where foreign models of military equipment were used to create their own models of weapons, but only in those areas in which lag was observed. Re-equipment of the army on the basis of foreign military equipment will lead to military-technical lag of Russian enterprises, deprivation of qualified personnel, reduction of jobs and unjustified budget expenses due to the non-transparent level of purchasing prices for foreign-made equipment.

At the same time, the military-industrial complex of Russia is able to develop, manufacture and supply to the country's armed forces the necessary modern military equipment in the required quantity. To do this, find a compromise solution on the terms of financing, the parameters of equipment and the price of supplies between manufacturers and the state customer.

The statement of the Ministry of Defense that industrialists do not know how to work in a market environment, but rely solely on state defense orders, is not objective. Many industrial enterprises have contracts for the export of their products. The fact is that contracts with foreign suppliers are concluded at a market price, but from a Russian manufacturer, the State customer requires the delivery of military equipment at a fixed price that does not take into account inflation and constantly rising production costs due to an increase in the cost of materials, components and resources.

The leadership of the General Staff of the Russian Armed Forces believes that Russian armaments are significantly inferior to foreign analogues.

According to a military official, for example, the Israeli tank Merkava MkIV has a greater firing range than the Russian T-90. But this conclusion is made without taking into account the type of ammunition used and the different testing conditions of the two samples. In reality, all the parameters of the T-90 are better than those of the Israeli combat vehicle, and the T-90 is more adapted to Russian conditions of operation. The disadvantages of the Merkava MkIV tank are too large combat weight, operation exclusively in the subtropical zone at a temperature not lower than 5 degrees, high cost of the machine, also requires the use of an expensive active protection system, and when firing at a distance more than 6 km, the requirement to use external laser illumination.

Another well-known fact confirms the lack of an Israeli tank: the untrained handling of Russian P-29 grenade launchers by Hezbollah militants managed to destroy 46 Merkava tanks in a relatively short time. By the way, the Russian Armed Forces do not have these wonderful Russian-made P-29 grenade launchers - the army does not buy them and they are only exported.

The Commander-in-Chief of the Ground Forces argues that all models of military equipment manufactured by industry are morally obsolete and are only modified versions of Soviet weapons. Since the GWP-2015 rearmament program failed, this position looks like an excuse for the lack of new weapons in the ground forces and the rationale for making decisions on the purchase of foreign military equipment.

The head of the General Staff, as a customer, decided to purchase Italian armored vehicles LMV M65 codenamed “Lynx” without taking into account the fact that the domestic industry produces a combat reconnaissance vehicle (codenamed BRM-3K) with the same name but more adapted to Russian conditions. At the joint field tests of the Italian armored car LMV M65 and the Russian armored vehicle “Tigr”, the foreign model, through 10 meters, got bogged down in the snow and got off the track, and the Russian combat vehicle passed the entire obstacle course safely.

It must be admitted that in many types of weapons there is a lag in the Russian defense industry complex. The Ministry of Defense believes that in the field of tank manufacturing, helicopter construction and in models of small arms Russia lags behind such producing countries as the USA, China and Israel.

Russian manufacturers explain this with outdated material and technical base, lack of qualified personnel, customer’s violation of financing schedules, delay in payment of already supplied equipment, failure to conclude long-term contracts for the supply of military equipment.

These circumstances do not allow defense enterprises to carry out effective business planning, conduct an optimal monetary policy, and conduct training of personnel.

The Ministry of Defense is not satisfied that industrial enterprises hide the detailed composition of production costs. Because of this, the state customer is not able to accurately establish the purchase price for each type of military equipment. The state customer in the person of the Ministry of Defense believes that the cost of weapons of domestic production is higher than the price of foreign analogues and that the products of the Russian military-industrial complex are not competitive.

While there are “disassembly” between the customer and manufacturers, the Russian army does not receive new equipment, the military-industrial complex suffers losses, the state order is not fulfilled.

Revitalization of the rearmament process is vital for the security forces of Russia. In order to accomplish this task, it will be necessary to reorganize not only the military-industrial complex, but also change the work of all customers in the area of ​​placing the state defense order.

It is planned that a scheme will be developed for the merger of defense enterprises into holdings, which will include not only manufacturers of final products, but also suppliers of raw materials and materials. Thus, pricing and the possibility of quality control at all stages of production will be facilitated. Customers will be entitled to take into account the profit of industrial holdings when determining purchase prices. The value of profit is a very important indicator. Since it affects the profitability of any production and the possibility of technical re-equipment of military-industrial complex enterprises.

Support for a Russian arms manufacturer, even if the price of final products is higher than for similar foreign equipment, will give the Russian military industrial complex a chance to subsequently equip the army with exclusively modern Russian-made weapons.

It is also necessary to legislate a state system of strategic planning in the field of creating new weapons, to develop legal acts approving the procedure for conducting procurement as part of the implementation of state plans to re-equip Russian law enforcement agencies.
Defense ordered? Special Report by E. Poddubny

The conflict over the state defense order of this year was perhaps the most public and protracted dispute between the military and industrialists. The Ministry of Defense hopes that the representatives of the plants will have less excuses and more new developments. Industrialists hope for timely payment and constructive dialogue with the military.