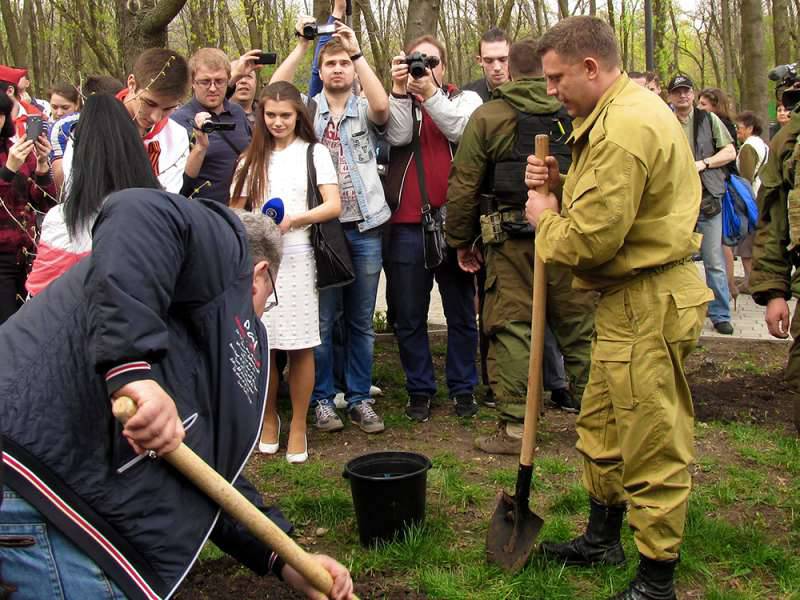 Two years already live Donetsk and Lugansk People's Republic. Is it good or bad, but these are territories free from fascism. This is the territory where holy things are kept. историяwhere residents defended their right to speak in Russian, where veterans of the Great Patriotic War are honored and not beaten (as in the occupied Ukraine junta).

Thousands of dedicated soldiers sacrificed their lives for the Republics to live. People who stopped the Neo-Bandera Tankswho caused fire on themselves at Saur-Grave, who carried the wounded on themselves ... As in the “forties, fateful”.

In memory of the Donbass defenders, both in that war and this war, the Alley of Memory was laid in the Lenin Komsomol Park in Donetsk on April 11. Now the fragile trees planted by the younger generation will faithfully keep the memory of the fallen. 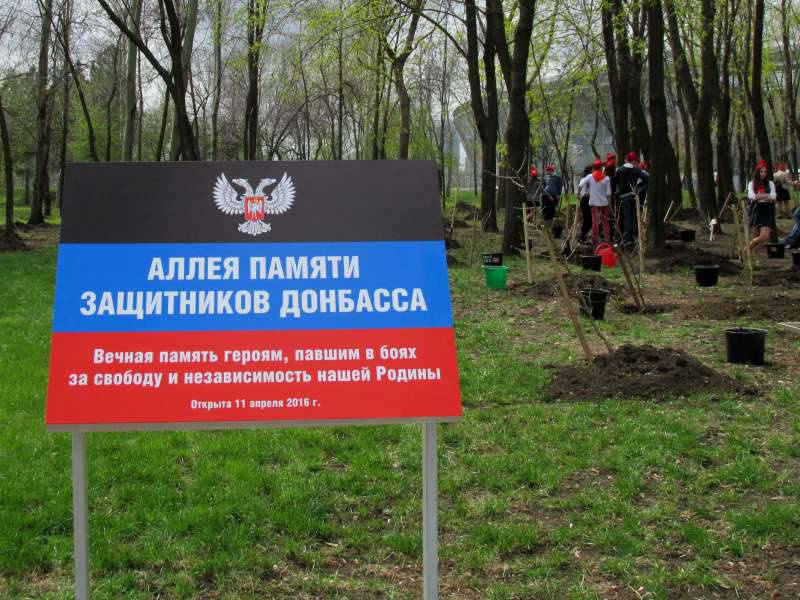 It is symbolic that this alley was created near the alley of angels. Near the stone dedicated to the children of Donbass shot by ukrohuntoy. 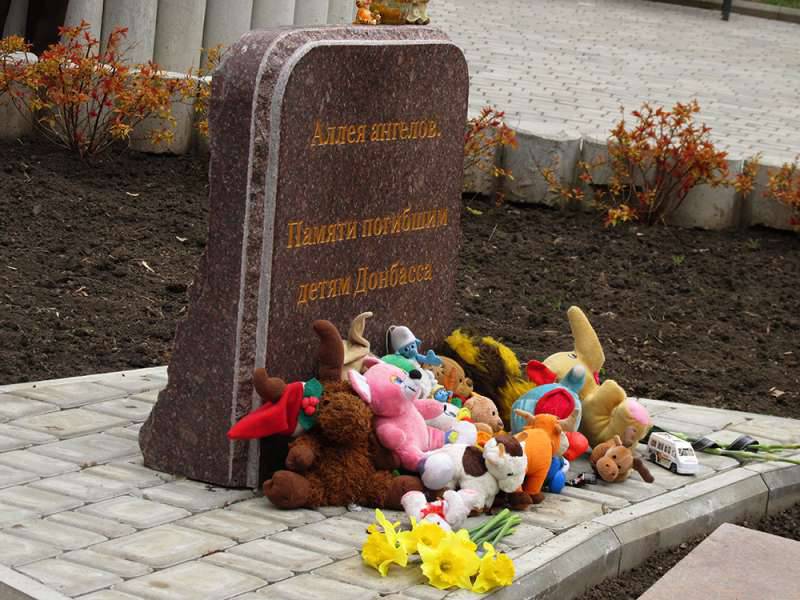 The head of the Donetsk People's Republic, Alexander Vladimirovich Zakharchenko, personally took part in the planting of young trees. Two veterans of the Great Patriotic War, Alexander Nikolaevich Dmitrenko and Vladimir Stepanovich Kurolenko, joined him as well as the schoolchildren. Together with them, Donetsk mayor Igor Martynov also worked.

And the ceremony began with the welcome words of the Head of the DPR. When the leader called him "the main defender", he declared that the main defenders were veterans of the Great Patriotic War, and asked them to stand side by side. Addressing these two venerable warriors, he said: “You were able to convey to us the feeling with which you were going into battle. The experience you gave us is the best science for us. This is the science of loving one’s homeland and giving its life for it. We could learn this from you. ”

Before declaring a minute of silence, Zakharchenko stressed that a nation that forgets its history and its defenders is a losing nation.

Olga Makeeva, deputy head of the People’s Council of the Republic, compared the newly opened walkway with Poklonnaya Hill. “Here lives the memory of the heroic deeds of our grandfathers, here we honor the memory of our children who died during the shelling,” she said.

The Minister of Information of the DPR, Elena Nikitina, said that young bear seedlings would now grow in the alley, and this tree lives for centuries: “The war has not ended, and we are in a hurry to thank. We are in a hurry to perpetuate the memory. The tree is a symbol of immortality. May the deed of those who gave their lives for peace be immortal. ”

Helped organize events and purchased seedlings guest from Russia Nikita Tomilin. This young man shared with the audience his impressions of trips to the warring Donbas. 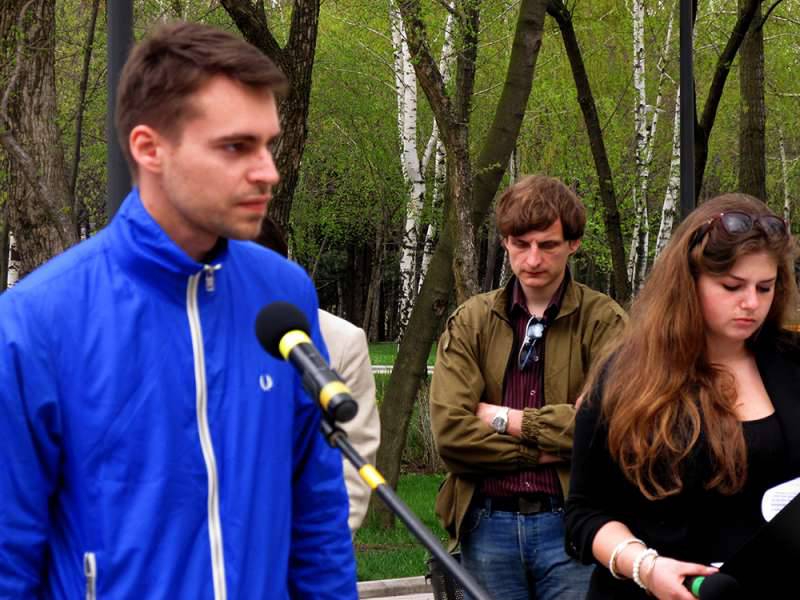 In memory of those who died in the air, balloons of three colors of the flag of the Donetsk People's Republic — blue, red and black — were released.

In addition, the head of the DPR Alexander Zakharchenko answered questions from journalists. He urged the Ukrainian military to lay down weapon and surrender, thus ending the killing of Donbas civilians. Those who wish, according to Zakharchenko, can join the army of the Republic.

The head of the young state expressed the hope that "Easter holidays will pass quietly, and this Easter will not be bloody." However, he noted, from that side they like to attack precisely on holidays. “If they decide to attack, then this Easter will be bloody not for us,” he said.

When asked by the journalist about the resignation of Yatsenyuk, Zakharchenko answered concisely and with irony: "Pyotr Alekseevich, stop rearranging the furniture."

No matter how things develop further, there will be or will not be a new offensive, and those who have fallen are already invincible. And the Donetsk residents will remember them, walking along the alley of memory and touching the trees with their palms ... 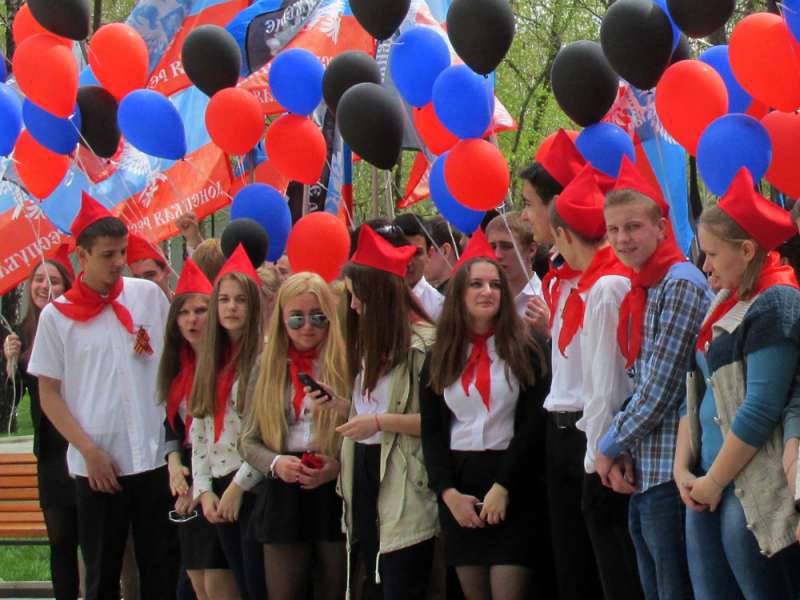 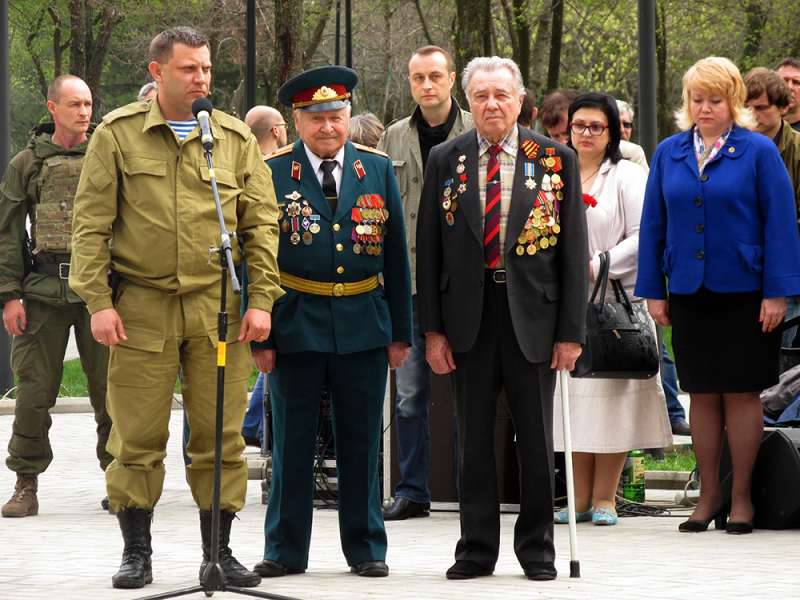 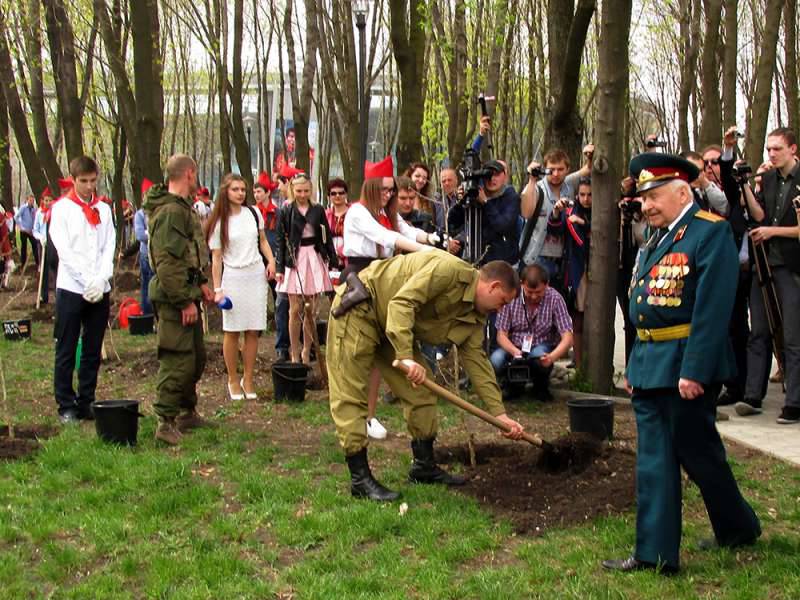 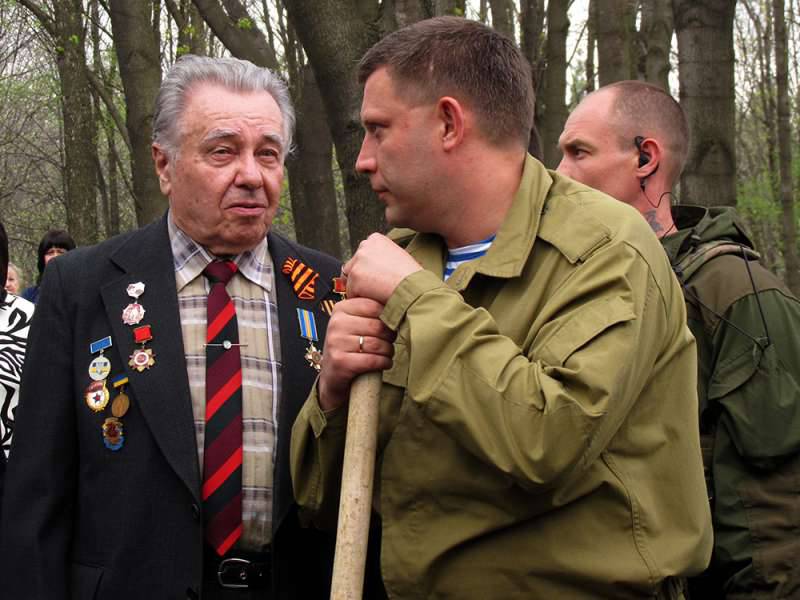 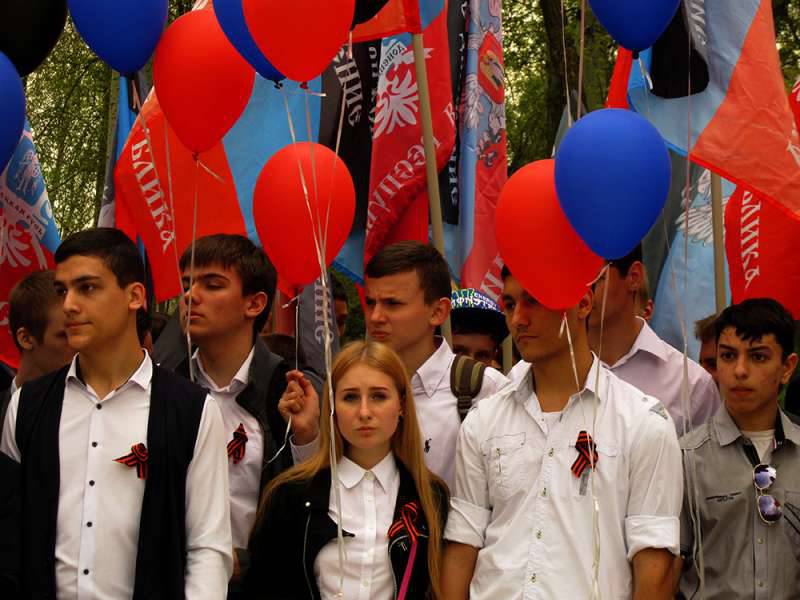 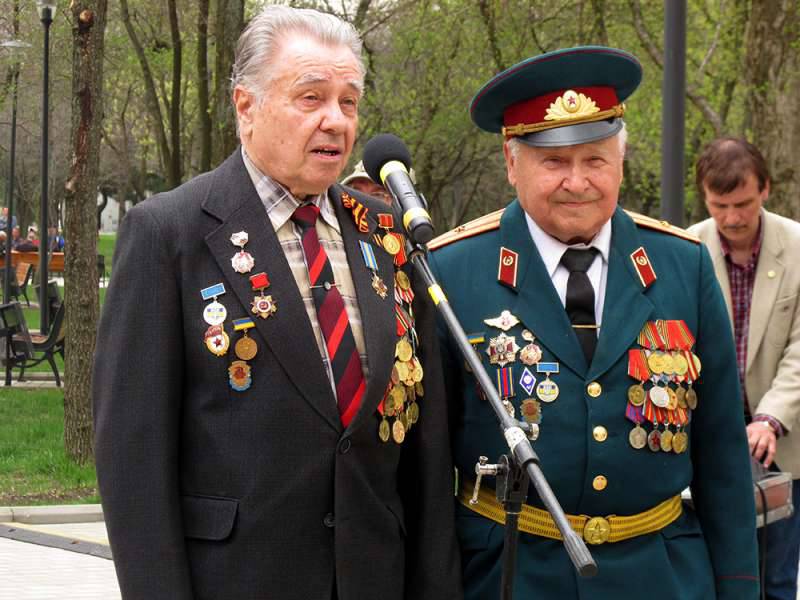 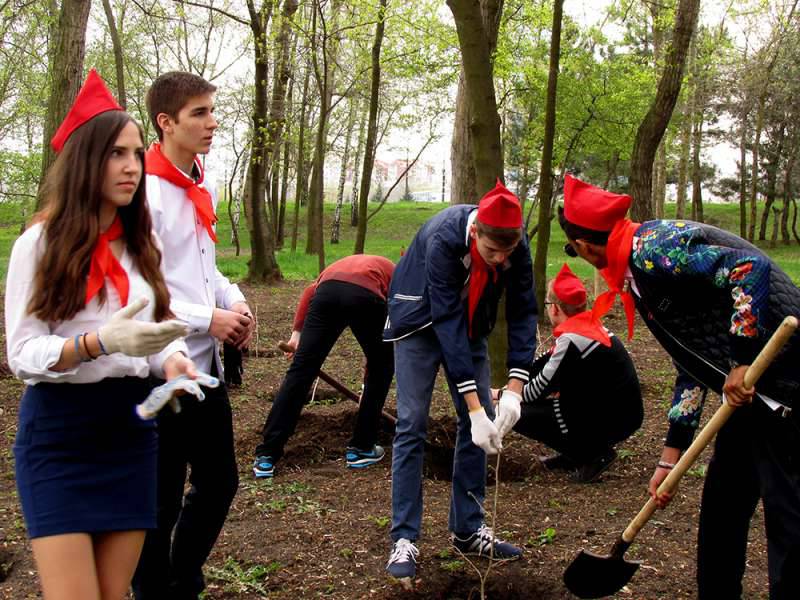 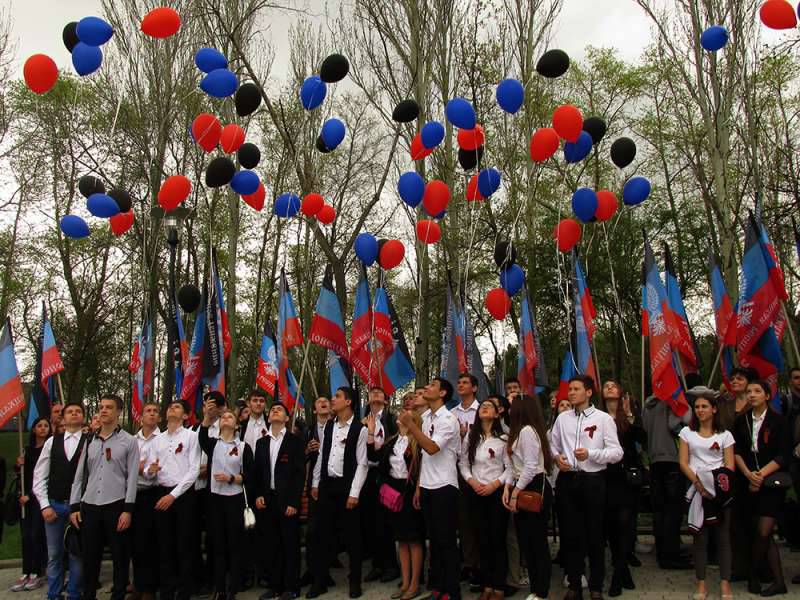 Ctrl Enter
Noticed oshЫbku Highlight text and press. Ctrl + Enter
We are
Memory sake. In the Donetsk Museum of the Great Patriotic War, a diorama of the battle at Saur-Grave openedWinds over Saur-Grave
Military Reviewin Yandex News
Military Reviewin Google News
20 comments
Information
Dear reader, to leave comments on the publication, you must sign in.