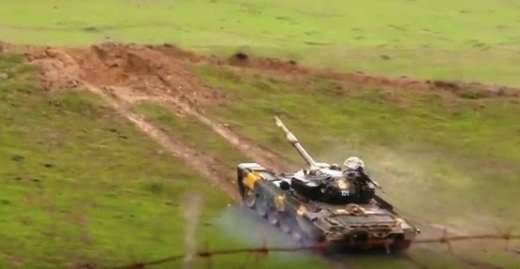 Every military conflict and almost every armed clash has at least something different from the previous ones, has its own specifics and therefore requires a separate and careful study. The recent aggravation of the situation in Nagorno-Karabakh is no exception. Some conclusions from what happened to the "Bulletin of Mordovia" said an independent military expert Alexei Khlopotov.

- In the general information flow, few people paid attention to the peculiarities of this conflict in tactical terms. And they, of course, were. For example, the losses in the armored vehicles from the Armenian side are relatively high in such a short time. What were they caused by? First of all, by the fact that the army of the unrecognized Nagorno-Karabakh Republic was represented on the front line of defense by outdated models - T-72А of release of the end of 1970-s of the beginning of 80-s. Their age is 30 and older. At the same time, they were absolutely not protected from high-precision weapons - they did not even have dynamic protection installed. Although, for example, Azerbaijan carried out such modernization - it Tanks T-72 Aslan, at least, can withstand RPGs and other light anti-tank weapons. But this is not the main thing.

The main thing is that the Azerbaijani side in this conflict has massed the NLOS Israeli-made Spike ATGM. This is one of the most modern and powerful anti-tank systems. Armenian tankers practically had no opportunity to protect themselves from it.

In this regard, the situation with the majority of Russian tanks is no better. In the long run, only Armata can resist Spike. And what about the rest? Go to battle as a slaughter?

In fact, there is a recipe for countering. This is an installation on the tanks of active protection complexes. After all, the same "artifact" "Afghan" can be mounted on the machines of previous generations. Nothing prevents this, except that the high cost of such individual protective systems. The second, and, in my opinion, more rational and promising option is the early development and implementation of the so-called "group defense systems for tank units."

Their concept was formulated even 10 years ago and voiced at the conference "Protection and Security", conducted by the Russian Academy of Rocket and Artillery Sciences. It was written by specialists of the armored industry research institute - VNIITransmash from St. Petersburg and the designers of the Ural Transport Engineering Design Bureau - people who created such masterpieces as T-90, BMPT and Armata.

The concept of individual-group protection involves the distribution of the entire composition of funds into two interrelated and complementary complexes:

- a group protection complex (KGZ), placed on a separate specialized carrier, which includes an intelligence system that collects information about the threat of attack of protected objects, a set of protection tools and an information management system (ICS) with a secure communication subsystem and satellite top secret;
- an individual protection complex (KIZ) installed on each of the protected objects, including on the KGZ carrier, and consisting of a set of onboard means of reducing visibility, optical and electronic countermeasures and information exchange units with the KGZ control system.

At the same time, I & C KGZ is given a key role in the organization of protection, namely, in terms of integrating information flows coming from protected tanks, attached to them by CIZ and external sources of information (district air defense, observation posts, etc.), conducting information exchange with ICS of higher hierarchical level and means of fire counteraction (anti-aircraft rocket-artillery complexes of short-range, etc.), as well as the choice of the most rational protection algorithm.

It is assumed that the KGZ should promptly identify and analyze threats, issue commands for countermeasures, both individual and own, mounted on a KGZ carrier. Specialists tank builders believed that to ensure the invisibility of the protected armored vehicles would be quite enough by rejecting the attacking ammunition (guided projectile or missile) outside the contour of the tank.

However, electronics specialists went even further in this direction. The research and production enterprise Radar-Mms, together with the St. Petersburg Higher Military School of Radio Electronics, proposed and conducted preliminary studies on the use of ultrashort but powerful microwave pulses for group protection of tank units. Usually modern systems of the WTO have in their structure rather complex complexes of electronic equipment to perform the tasks. The more complex the equipment, the easier it can be given to FPD (functional suppression) and FPR (functional lesion). With pulsed exposure, both options are possible. At the physical level, the breakdown and destruction of semiconductor elements, the complete destruction of processor technology and any radio elements. In the presence of current-carrying parts, wires, antennas, location, optical and other equipment, a complete destruction and equipment decommissioning occurs. In the presence of closed current circuits (closed metal shielding), thermal effect occurs, which leads to irreversible destruction of internal systems, forced disruption of combat units, fuel tanks.

To solve the problems posed by the functional managed lesion, R & D "Solaris" has already been carried out with the creation of an experimental sample. The aim of the work was the creation and testing of an experimental model of a super-power controlled source of electromagnetic radiation intended for the functional suppression of radio-electronic devices, including computer equipment, telemetry systems, electronic and electrical ignition systems of internal combustion engines, electronic systems and complexes, including those in service. As a result of this research, an experimental sample was created that passed field tests and showed the promise of using the corresponding complexes in practice.

However, at the moment the continuation of this work for unknown reasons has not received proper development. But the creation of such equipment, its placement as part of the KGZ could be a real breakthrough in ensuring the protection of armored vehicles from the defeat of the WTO. I consider it necessary to initiate and work in a forced pace to create KGZ equipped with microwave emitters.

The Armata platform is best suited as the carrier of such a complex. Placing the KGZ on it will ensure the unification of the fleet of equipment in the future. Well, if we talk about the present, then the optimal chassis for accommodating KGZ compounds consisting of T-90 and T-72 tanks, I consider the E300 chassis, developed at the Uraltransmash enterprise using the T-90 platform.

I hope the Russian Ministry of Defense will pay attention to the problems that have emerged during the short-term Karabakh conflict, and this will spur development in these areas.

Ctrl Enter
Noticed oshЫbku Highlight text and press. Ctrl + Enter
We are
Expert Aleksey Khlopotov: on the Syrian war, BMPT and BAM based on the Armata platformAn alternative to Armenia’s entry into the Eurasian Union is war
Military Reviewin Yandex News
Military Reviewin Google News
139 comments
Information
Dear reader, to leave comments on the publication, you must sign in.