The Syrian ogre is dead. Westerners vote in the UN Security Council 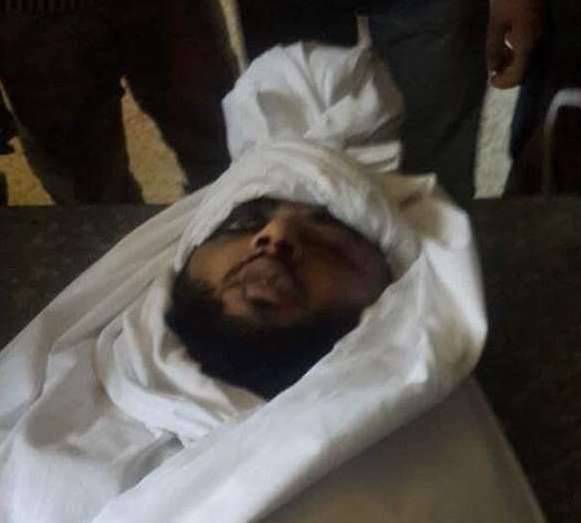 Of course, expressing satisfaction with a person’s death is not good. And if we are talking about a cannibal? About the real cannibal, in the literal sense of the word, which defiantly, on a video camera, devoured the insides of a dead Syrian soldier? “By Allah, we will eat your hearts!” He shouted at the same time ...

Well, we will not express satisfaction. We only note that the elimination is a natural result for any terrorist. And even more so for a cannibal bomber.

That terrible video of the act of cannibalism appeared in May 2013, when the Syrian army fought fierce battles in the province of Homs, near the city of Al-Xayr. No one has yet spoken about the notorious "Islamic State" (ISIS or DAISH). In the West, terrorists have not yet been divided into "igilovtsev" and - in contrast to them - into "moderate". They spoke only about the “democratic opposition”, which fights against the “dictator” (I mean, the legitimate President of Syria, Bashar Al-Asad, who suddenly became a “dictator” because he refused to be an American puppet).

And Abu Sakkar (that was the name of the eater of human flesh) was from the most rebellious quarter of Homs - Bab Amr, from the gang called “The Farouk Brigade”. That is, according to the current classification, it is the “moderate opposition”.

At the beginning of 2012, the entire West was actively harnessed for the terrorists operating in this quarter. It was about them as about the “fighters for freedom and democracy” who constantly turned on Euronews. And the incredible cry throughout the planet was spread after the Syrian army calmed down the Bab Amr quarter, expelling the armed bandits who did not give life to civilians.

But there was no loud condemnation by the Western leaders of the wildest demonstrative act of cannibalism. Although people in Europe and even in the United States after this incident still began to think: who supports their government? Ugly история turned out, is not it? The myth of “fighting the dictator and the regime” began to tangibly feel.

Earlier, the West remained deaf to reports of constant terrorist attacks in Damascus, Homs, Aleppo and other Syrian cities. Although dozens of innocent people died in these attacks. They did not want to hear about the constant abductions of supporters of the legitimate government, about torture, about the most brutal murders. But all this was created by the so-called "Syrian opposition." But cannibalism is still an out of the ordinary event, even against other cruelties.

It is not yet known exactly how exactly the "oppositionist" died. There are two versions of what happened. The first - he was killed by a strike from the Syrian air force. The second is that he became a victim of clashes between the militants themselves. In any case, it happened in the province of Latakia.

Reports of the liquidation of Abu Saqqara have appeared before, but, as it turned out, the man-eater managed to escape several times. But retribution was inevitable.

And would this monstrous criminal a common villain if he and those like him did not have high patrons. Those who all these long five years incite the armed gangsters on the Syrian people. Who constantly arranges any provocations, disrupts all peace initiatives, wages an information war against Syria and at the same time arming the militants. He continues to arm even after it is absolutely clear: the “moderates” easily flow into ISIS, and weapon between factions moves quite freely.

Western patrons of various “Abu Sakkars” blocked two statements proposed by Russia in the UN Security Council. One of them concerned the liberation of Palmyra from terrorists, the other - the participation of Syrian Kurds in the Geneva peace process.

It would seem that Palmyra was freed not from some kind of “moderate opposition” (if one assumes that such exists), but directly from the ISIS members. But instead of welcoming what happened, Washington and its allies do not even hide that they are depressed by this liberation.

Russian Foreign Ministry spokesman Maria Zakharova commented on the blocking of the statement on Palmyra: “This shows that in fact their [Western“ partners ”] are not interested in the process of liberating Syria from terrorists, nor facilitating the peace process through reconciliation on earth, and especially values. "

And just a few days later, she also had to express regret about the second blocked statement, although it concerned the inter-Syrian dialogue and the participation of the Kurds in it as one of the leading forces.

On this occasion, Konstantin Kosachev, head of the Foreign Affairs Committee of the Federation Council, said well: “This is a destructive, untimely and deliberately senseless step on the part of the Westernizers, made, judging by everything, solely by the principle of the source of the initiative. Just because it came from Russia. ”

Indeed, it is difficult to come up with another explanation, considering also that the fate of the Syrian Kurds in the ISIL confrontation was allegedly "sick" by the countries of the West (or rather, they pretended to be "sick").

And the secret to blocking Russian statements is, in fact, simple. Civilized cannibals need to continue the war. To thwart any attempt at a peaceful settlement. For more and more uncivilized cannibals to appear in the literal sense of the word. So that in this muddy, bloody water, to conduct their own affairs, continuing the policy of annihilating independent states.

Therefore, the West is much closer to such types as Abu Sakkar and ISIL, than the Kurds, Russians and Syrians. So why are they better than this man-eating man-eating animal? He shed the blood of others and bit his teeth into the flesh defiantly, for the sake of the frightening video. These - do the same thing, glaring into the living flesh of Syria, but in more sophisticated ways. And the goal is the same - to shed someone else's blood and to frighten all who else will think about resistance.