April 4 2016
49
At the end of last week, the Kremlin hosted a meeting of the Security Council of the Russian Federation, which, as usual, was chaired by President Vladimir Putin. The main topic of the meeting was devoted to migration policy and the percentage of crime in the migrant environment of the Russian Federation. During the opening speech, the president identified the main reason why the Security Council meeting was devoted to migrant issues. Press office Kremlin cites Vladimir Putin’s statement:

We see the serious consequences of the almost uncontrolled flows of refugees to Europe from the countries of the Middle East, North Africa, from Afghanistan, from other regions. Here and a surge of crime, and conflicts on national and religious grounds, and social tension. Migrants, in fact, deprived of the opportunity to integrate into society, become the object of propaganda, recruitment by extremists and terrorist organizations. Grow radical moods in this environment. But radical sentiments in this regard are growing among local citizens. We need to deeply analyze this situation, draw for ourselves the appropriate conclusions from the migration crisis in Europe, correct our actions where necessary, taking into account existing and potential threats. 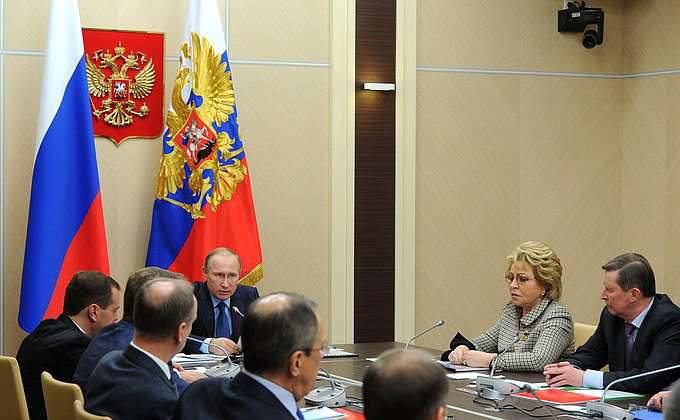 The issue of effective implementation of migration policy is more than a serious topic. If we take into account the fact that in recent years Russia itself has been confronted with a massive influx of migrants, the development of a strategy in this matter is directly related to the process of improving national security.

Russia has become attractive for millions of migrants from Central Asia, Moldova, Ukraine, and the republics of the Transcaucasus. The majority of these migrants, arriving in Russia, are indeed engaged in legal labor activities and bring certain benefits to the Russian economy too. However, among the millions of migrants entering the Russian Federation, there are a lot of those who either initially set themselves the goal of entering the criminal environment, or to be in this environment are forced by certain circumstances. What circumstances - a separate question ...

If you try to make some kind of comparison of the realities with the influx of migrants in Russia and the European Union, then, perhaps, with regard to the Russian Federation, there was a significant plus in the fact that citizens of states arrived in our country, in which at least they imagine some sort of averaged mentality residence times in a single state - the USSR. Yes, the sociocultural ties are largely confused, and a whole generation of people managed to grow up, who, to put it mildly, don’t feel much respect for Russia. But still, these are people from the post-Soviet space, when working with whom, at least hypothetically, you can find a common topic for discussion, points of contact, and work on this basis.

Europe is less lucky in this regard. People flow to the EU countries who have nothing in common with either the European principles of life or the European historynor with European laws. They do not just have, and are not even going to have anything to do with it. Moreover, the majority of such people do not come to the EU with the desire to get a job (at least as the same Central Asian guest workers in the Russian Federation), but with the desire to receive benefits and enjoy life - as a tribute for the fact that the old Europe, facilitating the United States, arranged in their native land, destroying not just houses and streets, but entire social and religious groups that lived their own lives. Arab and African migrants want to receive from Europe a kind of compensation for all the grief that Western civilization caused them. The logic is very simple: you destroyed my house, deprived me of a source of income - then I will live in your house and will use your income. The most interesting thing is that somehow it is even difficult to blame African and Arab migrants for this ...

However, it is worth returning to Russia and the Security Council meeting. Comparison with European migration policy, although in our favor, but it would be strange to be engaged in capturing about this. Thank God, the caps in the air, having decided that in the migration environment we have all the problems solved, no one throws up ...

To understand the dangers of migration, if it even partially goes into the category of uncontrolled, it is enough to refer to the figures of recent years in terms of the percentage of crimes committed by migrants. Thus, according to the statistics of the General Prosecutor's Office of the Russian Federation for 2012-2014 years, almost every fifth crime in Moscow and Moscow region is committed by immigrants from the republics of the former USSR: from 16 to 23%. And in most cases it is a serious crime: murder, robbery, rape. Moreover, we are talking only about solved crimes. So, the head of the Main Investigation Department of the RF IC in the city of Moscow a couple of years ago stated that the actual numbers of crimes committed by migrants in the same Moscow may be about 60%. The reason for the emergence of such a more than impressive process is related to the low detection of “migrant” violations of the letter of the criminal code. Having committed a crime, a “labor” migrant can leave the territory of the Russian Federation without any particular problems and, as they say, lie down on the bottom in his sunny republic. Lame discovery is also related to the fact that a large number of illegal immigrants remained and continue to exist in Russia, which, according to documents, as if not in the country, but they actually exist, and they can use their legal “invisibility” and often use it. In January-February alone, 2016, according to Legal Statistics Portal , Russia has not disclosed more than 23 thousand serious crimes. Over the 2015 year - almost 164 thousands! These are gigantic values, which show that the investigating authorities have, as they say, a lot of work.

Of course, it is impossible for all migrants (and according to estimates of the statistical services in Russia are officially around 8,8 million) to row with the same brush and write to criminals or potential criminals. But to say that all these almost 9 million people are white and fluffy in front of Russian law also makes no sense.

One of the most serious threats to Russia's security, as President Vladimir Putin notes, is associated with the presence of so-called dormant terrorist cells in the country. Persons from various republics of the former Soviet Union in Russia, recruited by representatives of international terrorist groups, themselves begin active recruitment activities, often using social networks and religious pretexts. Formed cells either remain on the territory of the Russian Federation, attempting to carry out sabotage and terrorist acts, or go outside the country (in the same Syria) to join the militants and take up weapon.

From the statement of Vladimir Putin:
Illegal migration channels are trying to take advantage of criminal groups, drug traffickers, foreign intelligence services, as well as emissaries of international extremist and terrorist organizations. These attempts must be firmly stopped, actively working through all of our responsible departments. Including it is necessary to strengthen the protection of sections of the state border in areas that represent an increased risk for the entry of illegal migrants. All possible "windows", loopholes must be reliably closed. (...) Serious concern is the non-decreasing level of crime among foreign citizens. Often they cause a surge of xenophobic, nationalist sentiments, give rise to all sorts of informational, propaganda attacks on Russia. I ask our departments to seriously strengthen the operational and preventive work to combat crime in the migration environment.

The President recalled that before 2025, the State Migration Policy Concept was in effect in Russia, aimed at increasing the efficiency of migration control and being open to those who are ready to respect Russian laws, culture, traditions, Russian language and engage in beneficial work.

The urgency of the issue of increasing the effectiveness of migration policy is also connected with this: for Russia, it is not at all guaranteed that soon Arabs, Africans, Afghans and other refugees will not tumble down into our country. Frankly speaking, one can hardly expect that the same Syrian and Libyan refugees (even if the conflicts in these countries are sooner or later extinguished) decide to immediately return to their homeland. Many simply have nowhere to return - there is no home, no work, or at least some prospects. And therefore, repeating the experience of Frau Merkel on the “policy” of open doors is clearly not the option that Russia should rely on today. Thank God that the federal authorities are not betting on this option.

Ctrl Enter
Noticed oshЫbku Highlight text and press. Ctrl + Enter
We are
Migrants go north. The specifics of the migration situation in Scandinavia"Rebellious Venezuelan Aviation." In memory of the commandant Hugo Chavez is dedicated
Military Reviewin Yandex News
Military Reviewin Google News
49 comments
Information
Dear reader, to leave comments on the publication, you must sign in.