Law and its consequences

April 1 2016
42
On Tuesday, 29 March, a new Law on the Self-Defense Forces entered into force in Japan, allowing the use of military force abroad for individual and collective defense. Perhaps no other bill has caused so many disputes in the country both in parliament and on the streets. Nevertheless, against the backdrop of the growing Sino-North Korean threat, the number of ordinary Japanese, supporting the restoration of military potential, is steadily increasing. According to media reports, if in September 31% of respondents adhered to this opinion, now it is 38%. The tone of official statements has also become more rigid.. 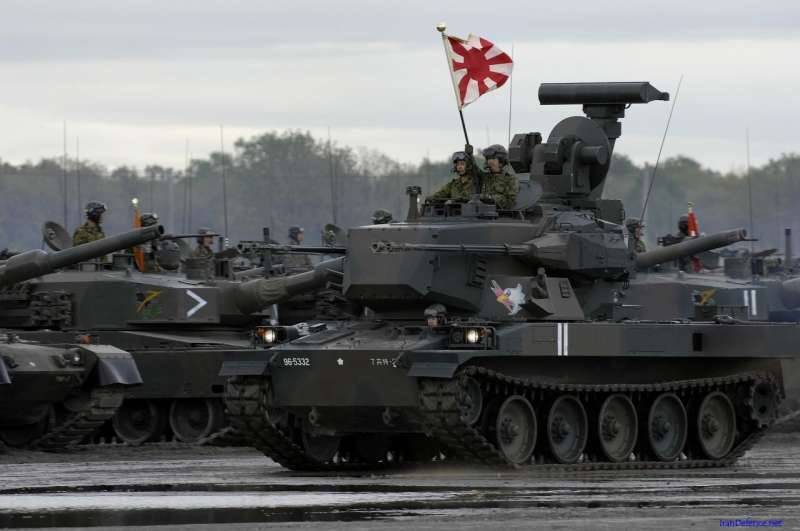 Law changing the status of the army and fleetobviously ripened a long time ago. And the point is not only that modern Japan has nothing to do with the war crimes of the leadership of the Japanese Empire. What is modestly called the Self-Defense Forces, in fact, outfits many of the "real" armies of the world and has long required appropriate legal registration.

Of course, there are enough slippery legal moments in the current legislative act, but they can rather be attributed to the imperfection of the Constitution, which the occupying authorities hurriedly wrote in 1946 year. It does not provide for the right not only to collective (the right to which is stipulated by Art. 51 of the UN Charter), but even to individual defense, which is obvious nonsense and the excesses of the then Allied administration. The Americans themselves realized their mistake fairly quickly, forming in the final period of the occupation what would later become the Japanese Self-Defense Forces.

When the phrase "Japan" and "military" our fellow citizens most often come to mind thoughts associated with the controversial Kuril Islands. What does the new law have to do with this topic? We hasten to reassure: directly - no. According to Japanese law, the islands of the southern part of the Kuril archipelago are occupied territory, so the concept of "foreign" is not applicable to them, and plans for landing troops exist in the General Staff of Japan from at least the mid-eighties. That is, there are enough existing laws to make a decision.

As for the central and northern Kuriles, as well as the south of Sakhalin, everything is ambiguous. Neither Tokyo nor Washington have ever recognized Russian sovereignty over these territories. Although this topic is not particularly advertised yet, in the future, Japan may declare its residual sovereignty over the northern islands. This will be done in the event that the Russian-Japanese relations finally deteriorate or Russia becomes critically weak. Some signs of such an outcome have been looming long ago, but few people notice them, except for specialists.

For example, during the peace-loving premiere of Yukio Hatoyama, not only was the largest helicopter carrier laid, today known as Izumo, but it was renamed in the north of Hokkaido a sub-prefecture of Abashiri (it does not adjoin the Kuril Islands, since they belong to the Nepremo prefecture) to the Ochotu prefecture ). There are other indirect signs that the case will not be limited to the southern Kuriles.

The constitutional provisions imposed in 1947 by the occupation administration of Douglas MacArthur are now not satisfied with not only the Japanese leadership, but also modern Washington, which needs a powerful military ally in Asia, by analogy with Britain and France in Europe. So, it is not surprising that Prime Minister Shinzo Abe mentioned the United States in his speech in connection with the new document, which became more like a report on successful work. At the moment, the security treaty between Washington and Tokyo is a little like an agreement within NATO. The principal difference is that if the United States is obliged to defend Japan, if it was attacked, then the Japanese assume the protection of only those American objects that are located on the territory controlled by Tokyo. However, for example, if an American aircraft carrier is attacked in neutral waters, there is a formal possibility that Japan will not cover it in any way. Now this possibility is excluded. On the one hand, the security treaty becomes more equal, on the other hand, the likelihood of the country being drawn into foreign wars increases, which the concerned public would like to avoid.

At the same time, obviously, there is a need to revise the bilateral Security Treaty. Its current edition is the second one and it works already from 1960 of the year, from the moment when the first version of 8 of September 1951 of the year was canceled. Changes in the size, status, and responsibility of the armed forces of Japan will inevitably require the adoption of a new agreement, already the third in a row. Apparently, the development of the contract will begin closer to the 2020 year, and it will include provisions that have not been considered before.

In the spirit of the times, in step with progress

At the start of 2015, Islamist Islamists executed two Japanese in Iraq. Earlier, in 2013, 9 citizens of the Land of the Rising Sun took hostage and killed the militants of the Algerian al-Qaida cell **. In both cases, the Japanese special forces could not help their citizens because of legislative restrictions. There are difficulties in the fight against piracy, where the Japanese Navy has the right to armed intervention only if a civilian ship goes under the Japanese flag, has Japanese nationals on board, or has cargo. The absurdity of such restrictions is fairly obvious even without detailed consideration and the new law removes barriers.

Changed and weapons. And so much so that actions outside the national territory become absolutely inevitable. So the launch of the SM-3 anti-missile missile, with an 2500 km range over an enemy warhead, clearly violates the Constitution, not to mention more trivial cases. It must be said that these restrictions became meaningless back in the 1950s, when Tokyo began to restore its military potential. So in 1959, the first post-war submarine “Oyasio” was launched, based on the I-200 project and named after the cold Kuril current. Four years before, the reborn fleet received its first destroyer, Harukaze. Even then it was clear that the combat radius of such ships far exceeds the size of territorial waters.

In subsequent decades, Japan took part in some peacekeeping missions under the auspices of the UN, and also symbolically indicated its presence during both Iraqi campaigns, although it did not actively participate in them.

Now Tokyo has allowed the armed forces to protect the Allies, if they formally invite him to participate. Aggression such assistance, of course, can not be considered. 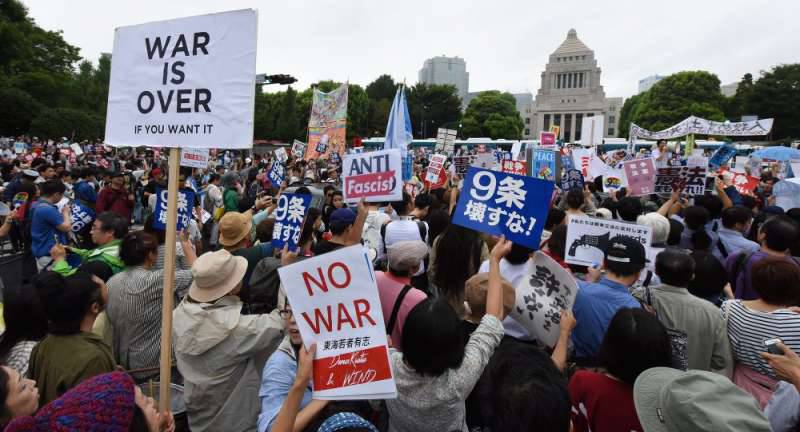 At the moment, Japan has no official military allies except the United States of America. The population and ruling class of South Korea are unlikely to want even the symbolic presence of the Self-Defense Forces on their territory, and the Philippines, Australia and New Zealand are too far away, both geographically and politically. Theoretically, Taiwan could become an ally, but for this, the latter must first declare independence and achieve diplomatic recognition.

Perhaps the most logical would be to conclude an alliance with Singapore or Malaysia with the aim of joint defense of the Strait of Malacca, through which a significant part of Japan’s maritime trade goes. First of all, it concerns oil and gas, which are delivered to East Asia from the Persian Gulf.

In 1945, the Japanese Empire came close to mastering nuclear weapons. Some historians have suggested that if the war lasted until November, then Tokyo would have a usable nuclear device by this point. After the war, the nuclear industry was divided among the allies. The cyclotrons of the universities of Kyoto and Osaki were dismantled by order of the American administration and drowned in Tokyo Bay, which did not prevent the Japanese from restoring them in the next decade. Some objects that were in the north of Korea and the island of Matsua, according to some information, were under the control of the USSR and were removed to its continental part.

In 1957, the first research reactor started operating in Japan, and in 1964, after testing a nuclear bomb in the PRC, Japanese Prime Minister Eisaku Sato told US President Lyndon Johnson in private conversation that, as the Chinese Communists own the bomb, Tokyo also has the right to manufacturing. Seeing the horror of the American administration at his words, Sato added that at the moment this is impossible because of the mood in Japanese society. Later, the Americans forced Sato to adopt the so-called "three non-nuclear principles."

Not much has changed since that time. Japan still has the capacity to build nuclear weapons and their means of delivery. In 2012, Japan had more than 9 tons of plutonium enough to produce 1000 warheads. At the beginning of 2016, Japan transferred to the USA 329 kg of weapons-grade plutonium and highly enriched uranium.

The inertia of Japanese society is quite large, and reformers will be extremely problematic to consolidate the existing state of affairs in the new Constitution. Nevertheless, every military event involving the DPRK, China or Russia is increasingly bringing the country closer to this day. The pacifism imposed by decades becomes new, to put it mildly, irrelevant. So the rejection of 9 Articles is only a matter of time and, apparently, not for long. By the way, along with the official re-establishment of the armed forces, the liberal democrats are planning to slightly expand the powers of the Emperor, which are now exclusively ceremonial in nature. Also a very significant transformation.

According to the results of the same new law has generated more noise than made a real change in the status quo. In reality, only the area of ​​what was allowed was expanded: first of all for peacekeepers, special forces and anti-piracy missions. Fundamental changes on nuclear weapons or on any other issue has not happened yet.

However, the rush of legislators is quite understandable. The situation in the region is heating up. It is necessary to have time to adopt the necessary legal acts and begin their implementation before an armed clash from the area of ​​purely hypothetical probability moves into the category of everyday reports from the front.

*, ** ISIS, as well as Al-Qaida, are recognized as terrorist organizations and banned in the Russian Federation.

Ctrl Enter
Noticed oshЫbku Highlight text and press. Ctrl + Enter
We are
Why does Japan strengthen the Self-Defense Forces?Pacific Rim: The Awakening of the Samurai Spirit in Japan
Military Reviewin Yandex News
Military Reviewin Google News
42 comments
Information
Dear reader, to leave comments on the publication, you must sign in.