Base off the coast of Taiwan

March 30 2016
18
On Monday, Japanese media spread information about the beginning of the garrison from 160 troops on the island of Yonaguni (Yonaguni), which is the country's most western outpost. The military will ensure the operation of the radar installation, the decision on the placement of which was made last year. This act was part of a more extensive program to strengthen the southern grouping, which also includes plans to deploy on the island of Miyako coastal complexes Type-88 with anti-ship missiles, as well as the modernization of airfields and strengthening of military units on Miyako and Ishigaki. 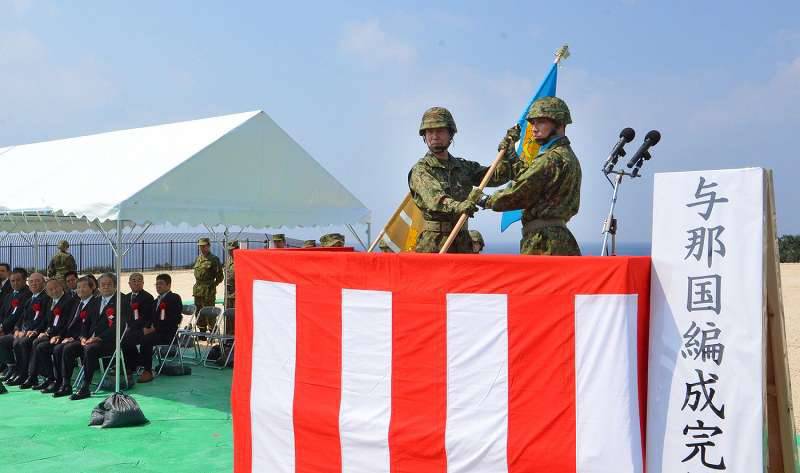 Photos from the opening ceremony of the base

Little is known about the radar itself, but presumably it will be an improved analog of the NEC J / TPS-102, an active phased-array system developed for the Self-Defense Forces at the start of 2000-x. This complex, consisting of two cars, will really allow to provide control over the adjacent space, which the military lacked earlier. At the same time, the long-standing problem of the air defense identification zone between the south of the Ryukyu archipelago and Taiwan, which has existed since the sixties, when the American occupation administration operated in Okinawa, is being resolved. 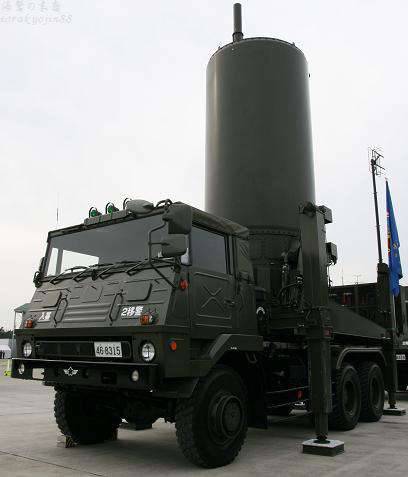 Yonaguni has a strategic position in the East China Sea. It is located just one hundred kilometers from Taiwan, and 150 kilometers from the Senkaku Islands (the Chinese name is Diaoyu), for which China has been claiming 1970's for no legal reason. Its area is only 28 square. km, and the population slightly exceeds one and a half thousand. There is a port and a civil airfield. At the same time there was no military presence on the island, except for two policemen. From about the 2010 year, when Chinese fighting and patrol ships were frequenting around Yonaguni, the authorities began to think about strengthening the borders. A fundamental decision on this issue was taken in 2015 year and at the same time on the island held a referendum in which the population showed full support for the plans of the Ministry of Defense, counting on investment in local infrastructure. 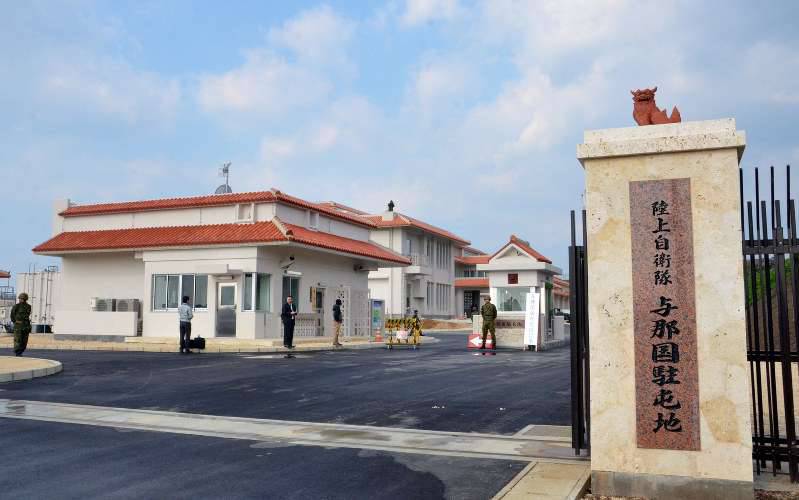 The 28 March opened 2016, the base is called a coastal monitoring point in the media, which consists of the Western Coastal Monitoring Group, as well as logistics and accounting services. All facilities worth about a billion yen will be located on an area of ​​26 ha.

There are two fundamental reasons for placing two: a territorial dispute with China around the Senkaku Islands and a possible aggravation around Taiwan. Both of these issues are interrelated, so without control over Taiwan, any actions on the disputed islands will be extremely difficult. Understanding this, Japan promoted the coming to power in the partially recognized republic of Cai Inven, which is known for its anti-Pekin views. Now for political measures are military measures. 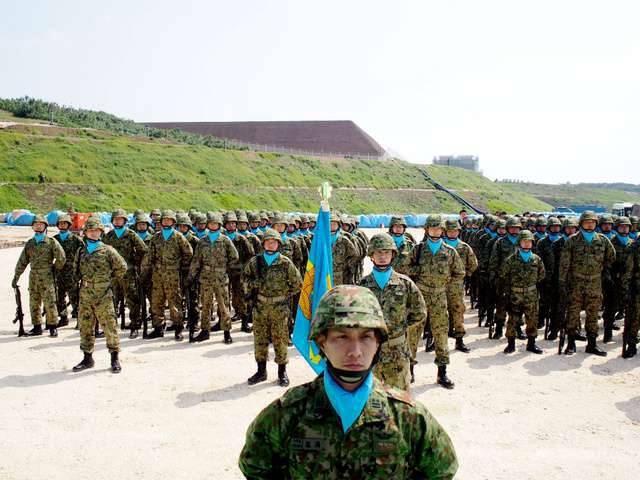 The garrison of the military unit at the facility commissioning ceremony

Yonaguni is not part of the disputed Senkaku archipelago, on which no military installations are planned. Senkaku itself is just a set of rocks, or rather, mountain peaks rising from the depths of the sea. The construction of any civilian and military facilities in such territories is an extremely difficult task, so it was decided to abandon its implementation altogether. Instead, the nearest inhabited islands, which already have civilian infrastructure, are being strengthened, from where it will be easier to strike at Senkaku rocks if Chinese troops risk landing on them. In this case, the risk of getting into one's own is not supposed at all. There are plenty of unsinkable aircraft carriers around: these are the islands of Yonaguni, Miyako, Irabu, Taram, Khaterum, on which one large airfield is built, as well as Ishigaki island, on which there are two such airfields. And that's not counting the airbases in Okinawa and the deck aviation seven Japanese helicopter carriers. In this situation, China will have to put up to seven aircraft carrier groups or conquer Taiwan in order to win the local conflict. Both that and another for Beijing is a super task. It should be added that there are very few airfields in northern Taiwan due to the mountainous terrain. 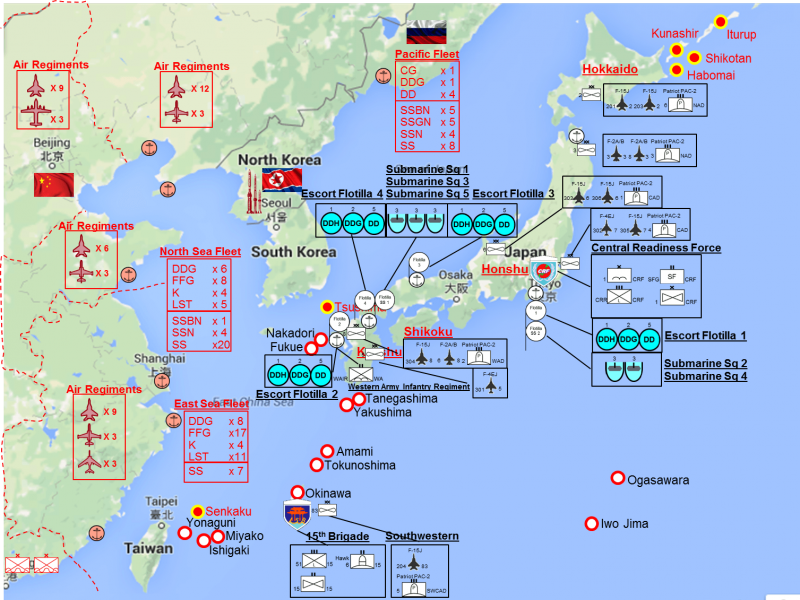 Approximate configuration of the location of forces on 2015 year

The appearance of the radar station and the garrison on Yonaguni is, of course, a more symbolic step than a real strengthening of the group in Okinawa Prefecture. The same China contains much more serious forces on the islands of Xisha and Nansha. But this step demonstrates Tokyo’s readiness for a collision if the situation demands it. It is noteworthy that a day after the opening of the radar base in Japan, a new law on the use of force abroad entered into force. China, despite the bellicose rhetoric, was held hostage to its own policies. During Mao Zedong’s time, territorial claims were made to almost all neighbors, and since 1949, China has in fact initiated about a dozen wars and armed conflicts. Such a policy, from which ideological attitudes it is no longer possible to abandon, was good for populism on the domestic field, but on the foreign policy arena only multiplies the enemies, who gradually get used to coordinate their actions against the Celestial.

Ctrl Enter
Noticed oshЫbku Highlight text and press. Ctrl + Enter
We are
A new round of the Japanese-Chinese dispute over the Senkaku archipelago: Is Tokyo's “anti-ship optimism” justified?Kinmen: an outpost of Taiwan off the coast of the PRC
Military Reviewin Yandex News
Military Reviewin Google News
18 comments
Information
Dear reader, to leave comments on the publication, you must sign in.