March 29 2016
27
Since April of this year, in Venezuela, construction of factories for the production of Kalashnikov assault rifles is being resumed under license. Reports about it RIA NewsRecalling the head of the delegation of Rosoboronexport on armory FIDAE-2016 exhibition Sergey Ladygin. From a statement by a representative of a Russian company:
Now this issue is under control at the highest state level. After a long break from April 1 construction will resume. 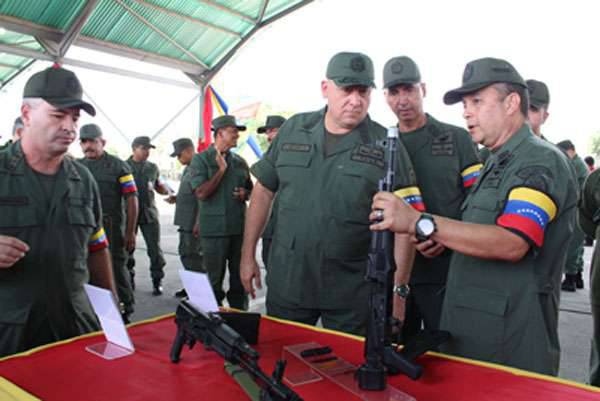 It should be noted that at the moment the readiness of two enterprises - for the production of Kalashnikov assault rifles (AK-103) and ammunition for them - is about 70%. At one time, construction was suspended, including due to financial difficulties, as well as the work of the general contractor. Now there has been a change of the general contractor, and according to the new plans, the plants will be completed in 2016-2017.

The first information about Venezuela’s readiness to build plants for the production of Kalashnikov assault rifles on its territory appeared in the media as early as 2006. The annual performance based on the plan should be about 25 thousand automatic machines per year.

In 2012, it turned out that there had been money theft during construction. The total amount of theft was about 1 billion rubles. The fate of the investigation of this case, as well as the persons involved in the theft of such an impressive amount, remains unknown to the general public ...