March 23 2016
105
The Russian military-political strategy received a due assessment in the West. Yes, exactly, without exaggeration. The Moscow campaign in Syria is called “brilliant.” For some six months, Putin has managed to demonstrate to the world community how the limited use of the army can change the balance of power. In addition, the Kremlin has proven that it is not at all necessary that any campaign in the Middle East will lead to a protracted war. Analysts in the US are sighing: can the next owner of the White House ever learn anything from Putin? 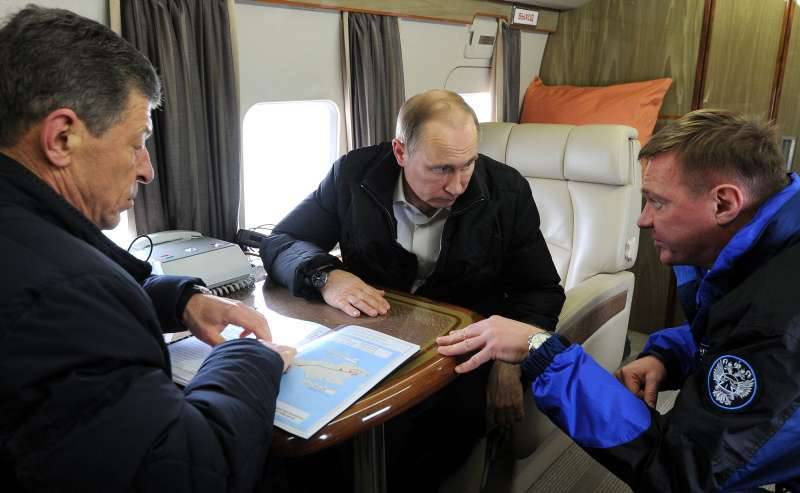 Bret stevens in The Wall Street Journal wrote an interesting article under the telling title “Learning From Vladimir”. For a major US press, the name is somewhat surprising: after all, the author, in fact, urged Washington to learn from Putin.

And indeed, Stevens believes: there is something to learn.

The analyst calls the short military campaign of Russia in Syria “brilliant” (splendid). True, the Russians had small losses and political friction: the Turks shot down a Russian plane and the conflict between Russia and Turkey began; the international community was outraged about the bombing of not civilian targets, but against civilian targets; there were reports of personal frictions between Assad and Putin. Some even believe that Putin announced the withdrawal of troops so suddenly because of these very tensions.

However, the journalist focuses on something completely different.

First, in just six months, Putin made the world understand that the limited use of the military machine could change the balance of power.

Secondly, he demonstrated an obvious fact: not every intervention in the Middle East leads to a protracted war.

What follows from this? A lesson for American presidents.

“Will the next US president learn something by analyzing this particular use of force?” The author asks.

Well, of course, an American journalist immediately inserts, "none of the future presidents" tells his military pilots to drop bombs "to the markets in the towns, as Mr. Putin did in Idlib and Aleppo." According to Stevens, “cruelty without a reason” is an inappropriate way for America to wage wars in the 21st century.

And even having such a point of view, the journalist suggests that the future guests of the White House take a few lessons from Mr. Putin.

When planning an invasion, the American president should:

1. Take sides in the war. The author refers to the useful experience of Mr. Machiavelli, who taught the emperor "to openly declare himself an enemy or a friend." This type of behavior is much better than “standing apart.” Putin has always taken sides: in Syria, he sided with the “regime”, and in the course of “interventions in Ukraine and Georgia”, he defended “representatives of the local Russian minority”. Neither Obama nor his predecessor Bush can do this: the first was more distinguished in “criticism” than in the war, and the second was at war for no one, but for the sake of “democracy”, hoping to “later” put some “democratic” in power representative of the "local". What came of it, everyone knows.

2. Use “other people's hands” (“Use proxies”). Do not go into a fight alone and lead all the fighting. And it is even better to do so that after you the one who is obliged to you remains in power.

3. Have real goals. Here, Obama did not understand Putin at all and did not know what he was thinking: the White House owner believed that the Kremlin would get bogged down in Syria as the USSR was stuck in the Afghan war.

4. Remember the rule of Earl Batz (ex-Minister of Agriculture, who once spoke about the pope’s edict on contraception: “You don’t play this game yourself, so do not make the rules!” His role the author of the article refers to as "remarkably insignificant."

5. Save options. Yes, Russia withdrew part of its troops from Syria, but left much there. In addition, Putin made it clear that he was ready to return troops to Syria. That’s how the United States could have acted in Iraq and Libya in its time (to provide a military presence), but ... it did not. The result is known to all.

A whole hymn to the glory of the Russian strategy was performed in the publication "The Trumpet".

While Obama continued to assure the planet that the Russians would "get bogged down" in Syria, Putin suddenly reported: "Mission accomplished." And he told the truth, says the publication.

According to some estimates, the almost semi-annual campaign in the Middle East cost Russia about $ 1 billion (about 2% of the annual defense budget). With this money, Putin introduced various types of aircraft into the campaign around 70 and sent 4000 people to Syria. Material losses of Russia are very small: one Su-24 (shot down by Turkey) and one transport helicopter Mi-8. And Putin is not at all "stuck" in the war.

He achieved a number of goals:

a) ensured the survival of the Syrian regime and maintained its position at the military base in Tartus;

b) received commercial benefits: by launching cruise missiles from the Caspian Sea, as well as demonstrating the power of the Su-34 in the air and the T-90 on the ground, Russia was able to show its modern weapons in battle. And now, according to press reports, many states are interested in Russian weapons (Algeria, Vietnam, Iraq, Kazakhstan, Turkmenistan, Uzbekistan, Uganda, Nigeria, Ethiopia). New supply contracts weapons by themselves, they are likely to cover a billion-dollar ad campaign, writes article author Brent Nagtigal;

c) Putin showed the political weakness of the United States in the Middle East and effectively declared Russia a power restoring its influence in the region;

d) besides, Moscow has restored its image, which was shaken after the Ukrainian crisis and the "green men". Now, in Europe, Putin is considered a person who can bring stability even to “the most unstable regions”.

Finally, Putin in Syria has shown himself as a person who is achieving a result (of peace negotiations). And he may well play the role of a “rational mediator" in negotiations between the Europeans, the Saudis, the Turks and the Syrians.

The point in this apotheosis of Russia was put by one of the old influential US magazines - "The Nation".

According to Matthew Del Santo, the inclination of Western politicians and the military, including the American NATO general F. Breedlove, to accuse Russia, and at the same time the “Assad regime” of provoking migration in Europe for the sake of “crushing European structures” is absurd. However, Breedlove and his ilk are not at all embarrassed by the lack of evidence.

Discussion of the “militarization” of Russia increasingly shows signs of a strategy designed to shift Europe’s responsibility for the refugee crisis from the EU leadership to Russian President Vladimir Putin. European politicians and Breedlove simply repeat the statements made by the European Council President Donald Tusk (the former Prime Minister of Poland from 2007 to 2014). For almost half a year he has been repeating, standing on the side of Mogherini, that he “knows”: Putin’s policy is built on the desire “to simply have enemies, to be stronger than them, to destroy them and be in conflict.” Such nonsense demonstrate a complete "lack of realism," the author believes.

Like most EU leaders, Mr. Tusk “forgot” about the deep cause of the migrant crisis: the collapse of states in Afghanistan and Iraq, caused by more than a decade of Western wars and failed “national construction”. In the case of Syria, the governments of the Western states and their Turkish, Saudi and Qatari allies bombarded the anti-government rebels with arms, money and gave them diplomatic support, which then led to the emergence of the IG hordes. When Russia launched an air campaign in Syria (30 September 2015), migrant flows in Greece have long been a problem for the EU. The refugee crisis has become a symbol of the inability of the European Union to guarantee the safety of its citizens. And the recent agreement with Turkey is unlikely to save the situation.

It is time for the West to stop showing hostility towards Russia and turn it into a scapegoat. The lack of realism in the concept of the EU and the corresponding practice of international politics is bad. Russia cannot be "excluded" from Europe. At the moment, European leaders, as well as their colleagues in Washington, seem to have no other vision for the EU’s relations with Russia, apart from making a scapegoat from Moscow, thus covering up their own blunders. However, it is time to change something, the author is convinced.

More and more voices in the West are being heard in favor of change: the United States and the European Union should show “realism” in politics, stop making mistakes and refuse to assign scapegoats. Some analysts even advise the White House to take lessons from the military-political strategy from Moscow.

However, against the background of the nonsense that the military old men like Bridlava and fantasizing politicians like Tusk say as the immutable truth, the voice of reason will hardly be heard. He is hammered by a thousand other votes.

Military commanders from NATO continue to assure the planet that Putin and Assad have decided to fill the whole of Europe with refugees, as well as to attack the Baltic States, Poland and, of course, Sweden the other day. In the US, they are already discussing the upcoming "warships" that Putin will send to the "annexation" of the Arctic. Speeches on the topic of the “annexation of the Crimea” are repeated periodically (they don’t talk about a referendum). Approximately two thirds of Ukrainians, according to other polls, believe in the actions of Putin’s troops in Ukraine. In the UK, intelligence agents with knowledge of the Russian language are recruited: it is assumed that they will catch "Moscow spies" on the streets of London. All these essays are awarded for “analyzing” and “evaluating” the Kremlin’s strategy. Where does realism come from?

Ctrl Enter
Noticed oshЫbku Highlight text and press. Ctrl + Enter
We are
Results of the weekGeopolitical mosaic: Western journalists discovered Machiavelli in the service of Putin, and Obama was advised to take an example from Don Corleone
Military Reviewin Yandex News
Military Reviewin Google News
105 comments
Information
Dear reader, to leave comments on the publication, you must sign in.