March 22 2016
50
... And then old Michael began to realize that he wants to return to the information field of the country, in which he previously served as the American ambassador, and in which he failed miserably with his “swamp” mission. Mike’s old-time American budget worked and worked, the printing press was printing and printing money, but Mr. McFaul didn’t meet the expectations of the State Department, and here’s the reality instead of Mr. McFaul’s expectations: Vladimir Putin is still in the president’s chair, Crimea and Sevastopol - as part of Russia, the "torn to shreds economy" is seeking opportunities for a spectacular Syrian operation, forcing Obama to sit on the phone and Secretary of State Kerry to burn aviation kerosene, with tripled strength in flights between Washington, Moscow and Geneva, to “isolated” Russia, politicians of those countries who were ordered to support anti-Russian sanctions became more frequent ... In general, old Mikey formed a complex that he is now trying to overcome.


Having called Russia a “wild country” when he was the US ambassador to the Russian Federation, Mr. McFaul now decided to reflect on the “annexation of the Crimea” in his microblog. As a result, the ex-ambassador launched a whole discussion on whether Germany has the right to annex Kaliningrad.

From the statement of McFaul:
Königsberg was a German city for many centuries. Maybe Germany attach Kaliningrad?

As if the rhetorical question was asked not by chance. Older Mikey was preoccupied with the territorial affiliation of Kaliningrad, while Russia celebrated the 2 anniversary of reunification with the Crimea and Sevastopol. Like, if Crimeans voted for joining the Russian Federation, would it not be that the residents of Kaliningrad would vote for joining Germany if they were given such an opportunity ... 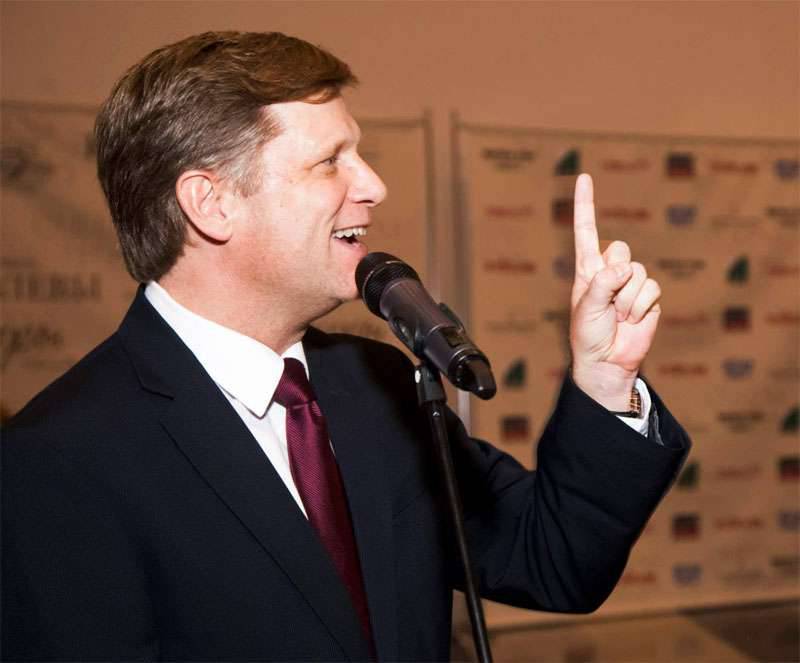 This tirade by Michael McFaul led to a heated discussion in the network, as a result of which the former US ambassador to the Russian Federation was asked not to engage in insinuations on the topic of the will of the Crimeans, but to attend to history the country whose diplomatic service he represents. After all, if we continue the “analogies” that Mr. McFaul has been picking up, then many questions may arise to the United States itself. One of the questions: whether, for example, Mexico should not attend to the American occupation of Texas. Otherwise, it is possible to dispute US ownership of Texas at the international level, if only because in 1845, Texas became part of the States by virtue of a Senate vote. No international treaties were signed on this matter. If in 1901, the US Supreme Court "confirmed" the legitimacy of joining Texas, then this does not at all mean that the United States did not violate international law on its accession. And if so, why not McFaul not bother with the questions of the territorial composition of his own country, and not the country in which he played the role of the carrier of the "orange" contagion.

Seeing that his questions about the status of the Kaliningrad region provoked a strong reaction in Russia, Mr. McFaul also proved to be a fair coward. Instead of explaining his point of view, old Mikey began to play back. According to his logic, he was again not so understood. Like, I just wanted to show “wild Russians” how they would behave if Kaliningrad were annexed by Germany, and they, I understand, dragged the proposal to Berlin to annex the former Königsberg. AND Twitter McFaul was full of statements that he was against “annexations” and that he “did not say anything like Kaliningrad” ...

As a result, Twitter users called McFaul "an ambassador with a diploma of" color "revolutions," he called on the American unlucky official to get down to business, not attempts at provocations.

In the meantime, McFaul, offended by fate and biting his elbows because he was unable to fulfill the function entrusted to him, his successor, Mr. Tefft, tried to continue the demonstration of the methods of “extensive diplomacy.” Earlier, in coordination with the US ambassador to Russia John Tefft, a delegation of American partners was to arrive in the Trans-Baikal Territory. In the Trans-Baikal media, it is noted that the visit is made by the deputy Tefft on political issues, Mr. Holmes, as well as the second secretary of the political department of the US embassy, ​​Mr. Bellah, and political adviser Mr. Godfrey. The plans of the “friends” were to meet with representatives of the administration, political parties and NGOs in Chita. However, something did not grow together, and the visit had to be postponed, reportedly for an indefinite period.

In this connection, the trip of Tefft's “falcons” to Transbaikalia failed? - the question remains unanswered. At the same time, it is obvious that it is unlikely that gentlemen working in the American embassy are preparing for a visit to the Trans-Baikal region solely with the aim of enjoying its beauty and having a glass of tea with the governor in a conversation “for life”. Tefft clearly does not want to stay in the future without a pension increase ...

In this regard, a separate question: is there anything heard about the plans of the Russian ambassadors to meet with political forces and non-governmental organizations in the regions of the “partner” countries? Given the fact that this question is not raised for the first time, it can be stated that sometimes our diplomacy is too diplomatic.