March 24 2016
17
Not so long ago, TOPWAR passed a series of articles about the battle of Verdun, and before that there were also materials about the First World War of Serfdom and the guns used against the forts of that time. And here the question arises: how was the experience of the First World War analyzed in relation to the struggle against the fortresses during the interwar period? What formed the basis of the various "lines" and "theories", how best to overcome them? That is, what did they write about this in the 20s, and what information was communicated to the same general public? Let's take a look at Science and Technology Magazine No. 34 for 1929 for the year, there was an article entitled “Modern Fortresses”, which dealt with the vision of a serf war that existed at that time and which formed the basis for the creation of many fortified bands on the borders of European countries on the eve of World War II.


“The appearance of rifled artillery in the second half of the XIX century was strongly reflected in the design and construction of the fortifications. By this time, the external forms of the fortress received their final development, expressed in the fact that the stone in the parapet gave way to the earth, and the fortress wall moved, so to speak, from the fortress core protected by it - the city, railway junction or an important ferry, and broke up into a number of individual items called "forts". Forts surrounded the core of the fortress ring, the radius of which reached 6-8 km. The removal of the forts from the city was necessary to prevent the destruction of the fortifications from enemy artillery fire. For a stronger cover between the forts, the second belt of forts was sometimes advanced. The gaps between the forts of the first and second lines were left in 4-6 km, subject to the presence of cross artillery fire between the forts. It was carried out by intermediate caponiers or polukaponirami proposed by the Russian military specialist, Ing. K.I. Velichko. These gunners were in forts. 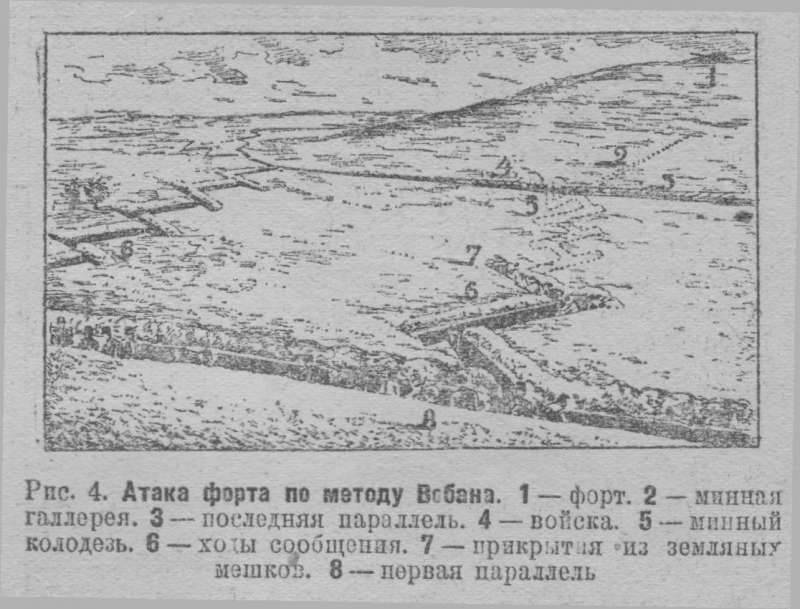 Rifled artillery is distinguished by its long-range, firing accuracy and strong shells. Therefore, the forts, which took the main blow of the enemy, and especially the solid stone buildings with very thick walls and arches sprinkled with large strata of the earth, became the main means of protection. Iron beams were used for greater strength, and concrete began to appear. Concrete reinforce the old stone walls.

The further evolution of the fortress buildings is caused by the appearance of high-explosive bombs, i.e. shells charged with a strong explosive (pyroxylin, melinite, trotyl). Possessing tremendous destructive power, they do not explode immediately when the projectile hits the target, but after the projectile uses all its penetrating power (percussion action). As a result of this property, the projectile pierces the ground covering of the fortified building and then breaks, like a mine, on the roof or close to the wall of the room, causing destruction by its high-explosive action.

Now stone, as a building material, disappears and is replaced only by the most durable materials: concrete, reinforced concrete and steel armor. The vaults and walls at the same time reach the thickness of 2-2,5 m, with additional sprinkling of ground thickness around 1 m. All the buildings try to deepen the ground as much as possible. The belt of the forts is doubled and carried forward 8-10 km. Forts are transformed into fort groups. Along with the forts, a separate defense of the gaps between the forts by field defensive structures (“redoubts”) is organized. The system of mutual flank fire from caponiers and polukaponir is especially developed. Fortresses are supplied with huge reserves and numerous artillery. For safe communication in the forts arrange concrete underground passages - "lost." Extensive mechanization is carried out: guns stand under armored domes moving through electricity, heavy shells supply and charging are also electrified, narrow-gauge railroads are carried out from the fortress core to the forts, powerful searchlights are installed, the core of the fortress is equipped with workshops where electric power is also used, etc. . etc.

The garrison of such a fortress numbers tens of thousands of soldiers in its ranks and is supplied, to a large extent, with special military-technical units: engineering, automobile, aviation, railway, armored, communications and so on. The entire command is concentrated in the hands of one person - the commandant of the fortress.

Such fortresses bar important operational directions and, at the same time, usually connect the cover of railway bridges across wide water boundaries. Hence their name - “Tet-de-pont” (the word French, literally - “head of the bridge”). If bridges are protected by a fortress from both banks, as is often the case, then this is a “double Tet de Pont”. A single Tet de Pon covers the bridge from one (located at the side of the enemy) coast.

In those cases when it is necessary to lock the passage through some narrowness (“defile”), for example, a pass in the mountains or a railroad in a swampy-lake area, they arrange a small fortress from 2-3, and sometimes one fort. But these forts receive very solid concrete, concrete-iron and armor closures, strong artillery and an adequate garrison. Such a fort or combination of forts is called the “fort-outpost”. This is the same fortress, but more modest in size, since in the direction it covers it is impossible to expect the appearance of large enemy forces with a powerful siege artillery.

On the contrary, if it is necessary to protect a large area of ​​strategic value 50-60 width and depth to 100 km with long-term fortifications, this task is carried out by combining a fortress (or fortresses) with forts- outposts by field fortifications. It turns out a fortified area for a long time. He is supplied with a garrison of such a size that would not only allow him to defend the serf positions, but also give the district commandant the opportunity to withdraw part of the troops to the field and, relying on the forces and means of the area, attack the enemy. Therefore, the garrison of the fortified area is close in size and organization to an independent army.

The parapet of the forts is proposed to be made from a concrete massif. On Valanga fort install heavy guns, the fort receives a system of underground (counter-mine) galleries to counteract the mine attack the enemy. Serious protection against open attack should serve as a water ditch. 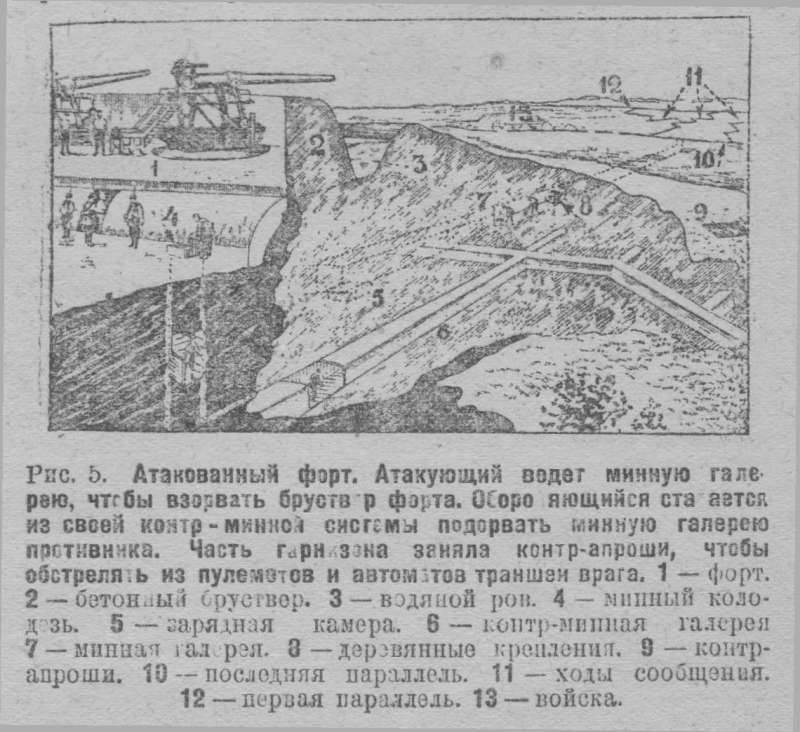 The attack of such a fort, as shown by the Russian-Japanese and World Wars (Verdun, Osovets, Przemysl), will be carried out according to the Voban method by a system of trenches and connecting them, zigzag in terms of moves, messages. The first trench (first parallel) is laid at a distance 200-1000 m from the fort. The infantry is fixed here, and the artillery is trying to suppress the fire of the fort and the fort gates. When this succeeds, the sappers lay the 2 parallel (trench) meters in 400 from the fort at night. It is occupied by infantry, and the sappers, with workers from infantry, connect the two parallels with the message moves, arranged in a zigzag manner and so that every subsequent zigzag ends at the previous knee of the message, protecting it from longitudinal fire damage. With a passage of the message, the workers of the head of the knee cover themselves with a parapet of earthen bags. For the 2 th parallel, the 3 parallel is arranged in the same way, meters in 100-150 from the fort. And already from here, if the defense of the latter is not broken, it is sympathetic and energetic, they go down under the ground and go by mine galleries. The size of these galleries is 1,4 m high and 1 m wide. They dress with frames.

The defender is not limited to one fire and the reflection of the assault. Trying to wrest the initiative from the hands of the enemy, he arranges parallels ahead of his fortifications. These “counter aproshes” can greatly damage the attacker and prolong the siege. They helped the Russians in defending Sevastopol (1856 / 54) and the French in defending the Belfort in 1870 / 71. 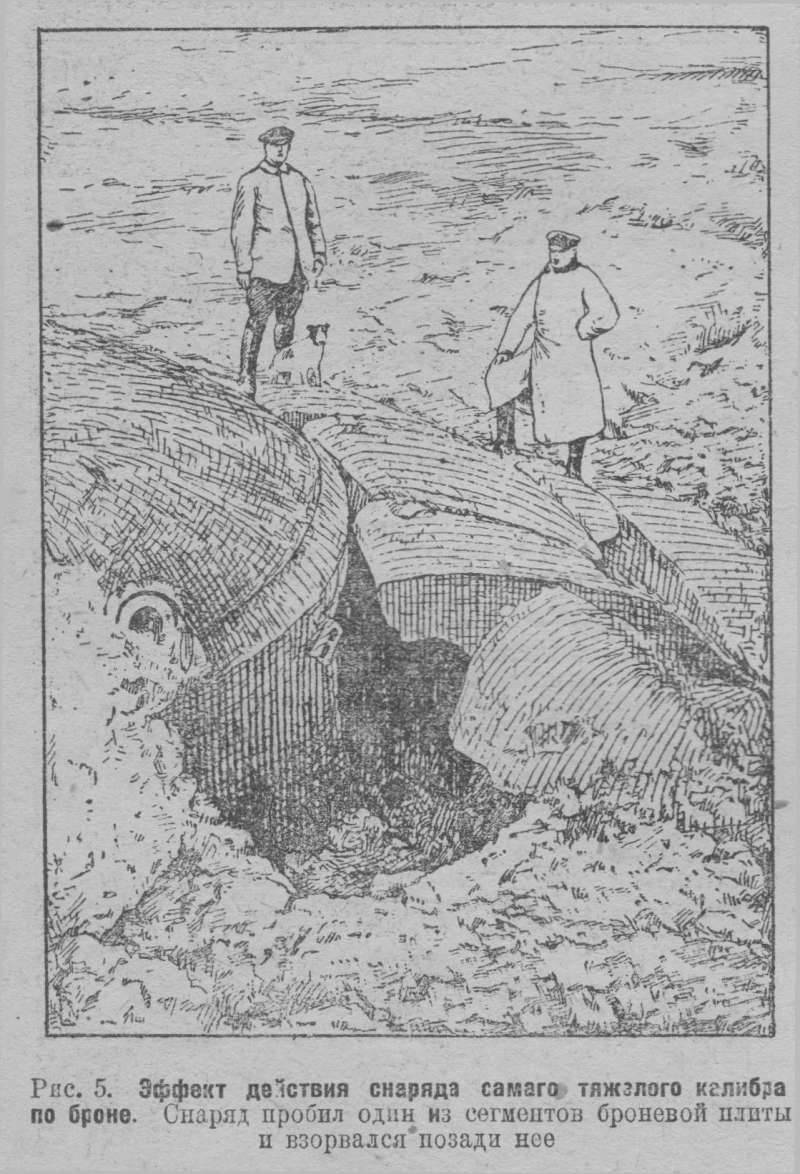 It should be noted, however, that they will never or almost never be completely modern, because fortresses are built slowly and are expensive (150-200 million rubles). And since military budgets are limited, every state is more willing to spend money on new artillery, on Tanks, airplanes, etc., than to replace an outdated fort with a modern one.

But it is not so scary. And the somewhat outdated fortress also keeps great defense capabilities. The case of the commandant to deploy them. " The last conclusion, as is known, through 12 years was fully confirmed only by the Brest Fortress!