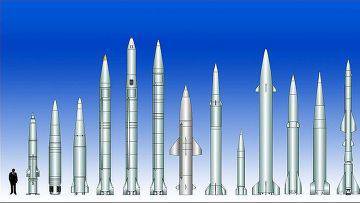 During the Senate hearings on the ratification of the New START Treaty, many senators constantly express their disappointment at the fact that the agreement does not restrict Russia’s tactical nuclear warheads. Proponents of the new treaty are responding to the fact that the treaty’s orientation towards strategic nuclear weapons is a continuation of the tradition of all previous US-Russian arms control agreements. However, critics are rightly concerned that the number of strategic warheads has dropped to such a low level that the United States can no longer ignore Russia's overwhelming superiority in the field of tactical weapons.

Strategic nuclear weapons are designed to win wars by striking large cities, military bases and other "strategic" objects. In contrast, tactical weapons are designed for use on the battlefield. From a practical point of view, strategic nuclear missiles are aimed at the most important areas of Russia and the United States, while tactical nuclear missiles were intended for combat in Central Europe.

During the years of the Cold War, the United States and Russia were holding up a multitude of both strategic and tactical nuclear missiles. But US-Russian arms control has always focused on strategic weapons, since it was theoretically believed that tactical missiles were useless to maintain a nuclear world, provided both countries had much larger stocks of strategic missiles. Events on the battlefield were considered unimportant if Washington and Moscow were threatened with destruction using strategic nuclear missiles.

But what was true at the height of the Cold War, when both sides possessed tens of thousands of strategic nuclear warheads, turned out to be much less true as both sides reduced their strategic forces. During the administration of former US President George W. Bush, the maximum possible number of strategic missiles installed on launch sites was reduced from 6000 to 2200 on each side. The new START treaty lowers this “ceiling” even lower, to 1550.

Unfortunately, Russia has not responded to these strategic arms reductions with a reduction in its tactical arsenals. According to most estimates, today the United States is holding in Europe from 200 to 300 tactical nuclear missiles, while Russia's arsenal ranges from 2000 to 3000.

The Obama administration claims in the Senate that Russia's tenfold advantage in the field of tactical nuclear weapons insignificant from a military point of view and will remain insignificant, even if the strategic forces of the United States are reduced by about half the size of Russia's tactical forces, as required by the new START Treaty. But it is obvious that there comes a time when strategic arms reductions will be so deep - and the Russian advantage in tactical weapons so large - that this discrepancy can no longer be ignored.

Incredibly, the arms control community and even some of the US allies in Europe believe that the solution to this problem will be the unilateral withdrawal of American tactical warheads remaining on the European continent. They mistakenly assume that in response Russia will remove its warheads (at least, those that are deployed in the European part of the country). The Obama administration has not yet agreed to this decision, but has not rejected it, instead promising to strengthen consultations on this issue within NATO and urging Russia to hold talks on reducing tactical weapons.

Indeed, even persuading Russia to simply discuss the issue of tactical weapons will already be a significant achievement. The Bush administration has repeatedly tried to start such a discussion, but Russia has always refused, always insisting that there is nothing to talk about until the United States removes all of its tactical missiles from Europe, while Russia leaves its weapons in this theater of operations. With the coming to power of the Obama administration, Russia's position on this issue has not become more flexible. When the senators asked her why the new START Treaty mentions only strategic weapons, US Secretary of State Hillary Clinton admitted that "they [the Russians] were not ready to discuss tactical nuclear weapons."

This inflexibility reflects a disturbing reality. Russia pointedly did not become a supporter of the vision of a world without nuclear weapons proposed by Obama. On the contrary, as US Secretary of Defense Robert Gates frankly told the Senate: “Everything that we see indicates that they reinforce the importance and role of their nuclear missiles in the defense of Russia.” Representatives of the Russian authorities explain this by saying that the country's usual military potential has been seriously affected since the collapse of the Soviet Union, while the threats to Russian security have increased.

These perceived threats include not only China in the east and unstable Muslim regions in the south, but also NATO in the west. In fact, NATO has rather stabilized the western periphery of Russia, and did not become a threat to it, but the resentment for the loss of most of its former empire in favor of NATO prevents Moscow from recognizing this reality.

In an atmosphere where the threats perceived by Russia exceed its ability to defend itself with conventional means of defense, the Russian authorities see tactical nuclear missiles as a great leveler. The United States has little to offer to convince the Kremlin to reduce its tenfold superiority, not to mention the complete destruction of these missiles.

Washington would have even less to offer if the Obama administration would unilaterally withdraw American tactical missiles from Europe. Proponents of this idea misunderstand the very nature of the problem. In fact, Russia holds tactical nuclear weapons on the alert to counter the perceived threat from NATO.

For this reason, the new START Treaty is likely to be the latest arms control agreement signed with Russia for a long time to come. Another traditional agreement to reduce strategic armaments is not even discussed. Any future agreements will have to include the limitations of tactical weapons, but Russia seems determined to keep this nuclear trump card with it as long as it considers NATO a threat. To change this point of view will require much more than the reset buttons and one-sided concessions from the United States.

Author:
Stephen Rademaker was US Assistant Secretary of State for Arms Control from 2002 to 2006 a year. He now works as a senior adviser to BGR Government Affairs in Washington.
Originator:
http://www.inosmi.ru"rel =" nofollow ">http://www.inosmi.ru