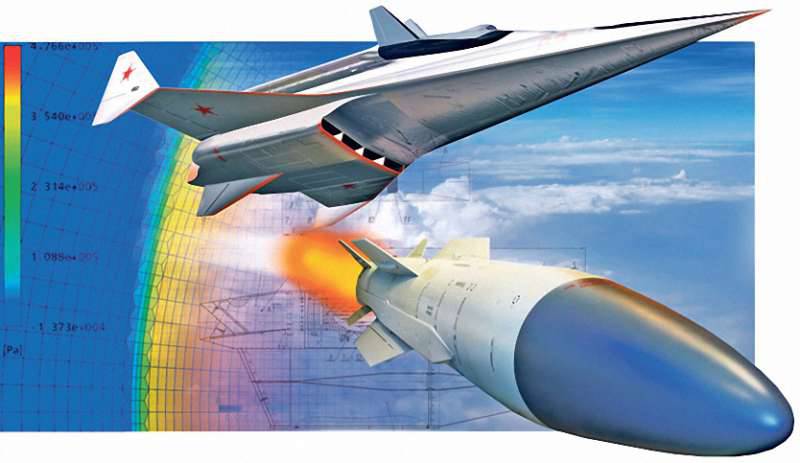 The flights of “three-winged” aircraft were accompanied by fierce heating of the structure. The temperature of the edges of the air intakes and the leading edge of the wing reached 580-605 K, and the rest of the skin of 470-500 K. The consequences of this heating are evidenced by the fact that already at 370 K the organic glass used for glazing cabins softens and boils the fuel. With 400 K, the strength of duralumin decreases, with 500 K the chemical decomposition of the working fluid in the hydraulic system and the destruction of seals occur. At 800 K, titanium alloys lose their mechanical properties. At temperatures above 900 K, aluminum and magnesium melt, heat-resistant steel loses its properties.

The flights were conducted in the stratosphere at an altitude of 20 000 meters in very thin air. Achieving the 3M speed at lower altitudes was not possible: the plating temperature would have reached four-digit values.

Over the next half century, a number of measures have been proposed to combat the scorching fury of atmospheric heating. Beryllium alloys and new ablative materials, composites based on boron and carbon fibers, plasma spraying of refractory coatings ...

Despite the successes achieved, the thermal barrier still remains a serious obstacle to a hypersound. The obstacle is obligatory, but not the only one.

Supersonic flight mode is extremely costly in terms of thrust and fuel consumption. And the level of complexity of this problem is rapidly increasing with decreasing flight altitude.

To date, none of the existing types of aircraft and cruise missiles could reach speed = 3М at sea level.

The record among manned aircraft became the MiG-23. Thanks to its relatively small size, variable sweep wing and powerful P-29-300 engine, he was able to develop 1700 km / h from the ground itself. More than anyone in the world!

Closest to the cherished 3M got the promising “Caliber”. Thanks to the multi-stage layout, its detachable warhead (which itself is the third stage) is capable of developing the 2,9М speed at the finish. However, not for long: the separation and acceleration of the warhead is made in the immediate vicinity of the target. On the march area ZM54 flies on the dialup.

It is worth noting that there is no information about the testing and development in practice of the ZM54 separation algorithm. Despite the common name, the ZM54 rocket has little in common with those “Calibers” that staged an unforgettable firework in the sky over the Caspian last fall (subsonic CD for strikes on land objects, ZM14 index).

It can be stated that a rocket developing a speed of> 2M at low altitude is literally only tomorrow.

You have already noticed that each of the three anti-ship missiles that are capable of developing 2M on the flight march (Mosquito, Onyx, Brahmos) is distinguished by exceptional weight and size characteristics. The length of 8-10 meters, the starting mass in 7-8 times the performance of subsonic CRP. At the same time, their combat units are relatively small, they account for about 8% of the launch vehicle’s mass. And the range at low altitude barely reaches 100 km.

The possibility of air-based these missiles is questionable. Due to the excessively long lengths, the Mosquito and Brahmos do not fit in the OHR, they require separate launchers on the decks of ships. As a result - the number of carriers of supersonic RCC can be counted on the fingers of one hand.

At this point it is worth referring to the title topic of this article.

ZM22 “Zircon” is a hypersonic sword of the Russian Navy. Myth or reality?

A rocket about which they talk so much, but no one even saw its outlines. What will this super-weapon look like? What are its features? And the main question: how realistic are the plans to create such an ASM at the modern technological level?

After reading the long introduction about the torment of the creators of supersonic aircrafts and the Kyrgyz Republic, many of the readers probably had doubts about the realism of the existence of the “Zircon”.

A fiery arrow flying at the border of supersonic and hypersound, capable of hitting sea targets at 500 distances and more than kilometers. Whose dimensions do not exceed the established limits when placed in the UCSC cells. 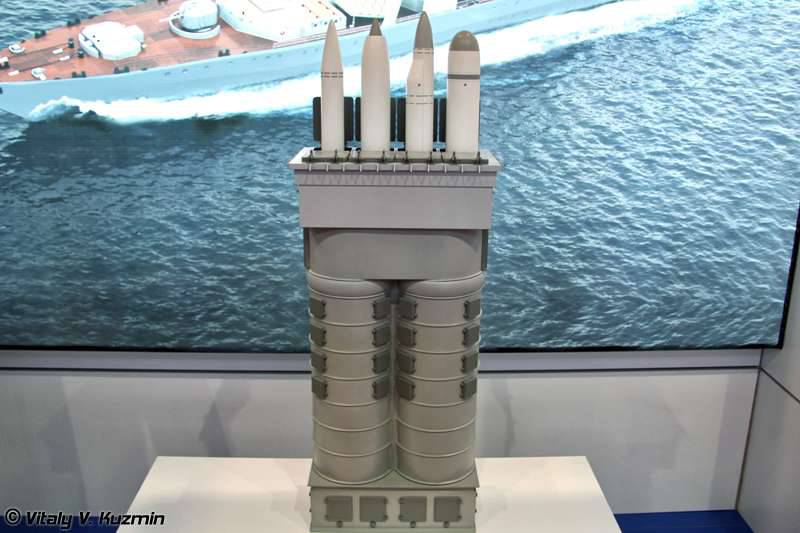 Universal ship shooting complex 3С14 - 8-charging under-deck vertical launcher for launching the entire range of Caliber family missiles. Max. the length of the transport and launch container with a rocket - 8,9 meter. Restriction on starting weight - up to three tons. It is planned that ten such modules (80 launch shafts) will form the basis of the strike weapons on the upgraded atomic Orlans.

A promising super-weapon or another unfulfilled promise? Doubts are in vain.

The appearance of a supersonic anti-ship missile capable of developing 4,5M speed in flight is the next logical step in the improvement of rocket weapons. It is curious that 30, which have similar missiles for years, have been in service with the world's leading fleets. One index is enough to understand what is at stake.

The warhead is a high-explosive fragmentation weighing 180 kg.

Estimated range of destruction VC - up to 200 km. 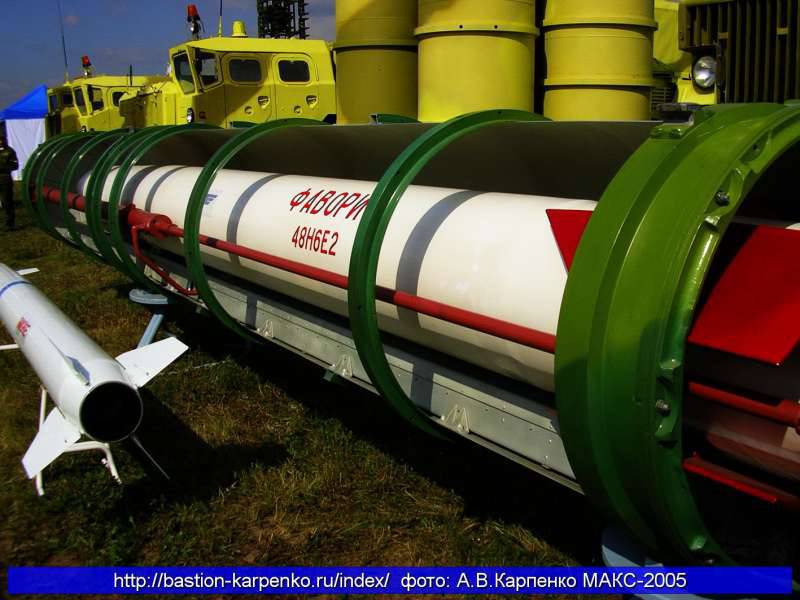 How justified is the comparison of anti-aircraft missiles with anti-ship missiles?

There are not so many conceptual differences. Anti-aircraft 48Н6Е2 and perspective “Zircon” are guided missiles with all the ensuing consequences.

Seafarers are well aware of the hidden capabilities of the shipboard SAMs. Half a century ago, during the first firing of anti-aircraft missiles, an obvious discovery was made: at the line of sight, the ZYRs would be the first to go. They have a smaller mass of warheads, but their reaction time is shorter compared to RCC by 5-10 times! This tactic was universally applied in “skirmishes” at sea. The Yankees damaged the “Standard” Iranian frigate (1988). Russian sailors with the help of “Wasps” dealt with Georgian boats.

The bottom line is that if conventional missiles with a non-contact fuse turned off can be used against ships, then why not create a special tool on its base for hitting surface targets?

The advantage will be a high speed of flight, at the turn of the hypersound. The main drawback is the high-altitude flight profile, which makes the missile vulnerable when the enemy’s air defenses break through.

What are the main design differences Zur and PKR?

It is worth noting that anti-aircraft missiles with ARGSN have been used in the world for a long time. The first of them (the European “Aster”) was adopted over ten years ago. A similar rocket was created by the Americans (Standard-6). Domestic analogue are 9М96Е and Е2 - anti-aircraft missiles of the shipborne air defense system “Redut”.

At the same time, finding the 100-meter ship should be easier than aiming at an actively maneuvering object of point dimensions (aircraft or cruise ship).

Most anti-aircraft missiles are equipped with a solid-propellant rocket engine, whose work time is limited to seconds. The 48H6EX2 rocket propulsion engine has a running time of only 12 s, after which the rocket flies by inertia, driven by aerodynamic control surfaces. As a rule, the range of the Zour flight along a quasi-ballistic trajectory, with a marching segment high in the stratosphere, does not exceed 200 kilometers (the most “long-range”), which is quite enough to carry out the tasks assigned to them.

The anti-ship weapon, on the contrary, is equipped with turbojet engines - for a long, for tens of minutes, flight in the dense layers of the atmosphere. With a much lower speed than is customary for anti-aircraft missiles.

The creators of the 4-flywheel “Zircon”, obviously, will have to abandon any turbojet and direct-flow engines, using a proven technique with a powder TTRD.

The task with increasing flight range is solved by a multi-stage layout. For example: the American Standard-3 interceptor missile has a range of 700 km, and the interception height is limited to a low earth orbit.

Standard-3 is a four-stage rocket (the Mk.72 starter, two sustainer stages and a detachable kinetic interceptor with its own engines for trajectory correction). After separation of the third stage, the speed of the combat unit reaches 10 Mach!

It is noteworthy that the Standard-3 is a relatively lightweight compact weapon, with a starting weight of ~ 1600 kg. The anti-missile system is placed in a standard DPS cell aboard any American destroyer.

The anti-missile does not have a warhead. The main and only striking element is its fourth stage (an infrared sensor, a computer and a set of engines), crashing at full speed into the enemy.

Returning to Zircon, the author does not see fundamental obstacles to an anti-aircraft missile, which has a lower speed and a flatter trajectory than the standard 3, after passing through the apogee can safely return to the dense layers of the atmosphere. After that, detect and attack the target, falling a star on the deck of the ship.

The development and creation of hypersonic anti-ship missiles based on existing anti-aircraft missiles is the most optimal solution in terms of minimizing technical risks and financial costs.

A) Shooting at moving naval targets at a distance over 500 km. Due to the high flight speed of the Zircon, its flight time will be reduced to 10-15 minutes. That will automatically solve the problem of data obsolescence.
Earlier, as now, RCCs are launched in the direction of probable target finding. By the time of arrival in the specified square, the target can already go beyond its limits, making it impossible to detect the GOS of the rocket.

B) From the previous paragraph it follows the possibility of effective firing at extremely long distances, which will make the rocket a “long arm” fleet. The ability to deliver operational strikes at a great range. The reaction time of such a system is ten times less than that of the wing of an aircraft carrier.

C) The attack from the zenith, along with the unexpectedly high speed of the rocket (after braking in dense layers of the atmosphere, it will be around 2М), will make most of the existing short-range defense systems (Kortiki, Goalkeepers, RIM-116) ineffective etc.)

At the same time, the negative points will be:

1. High altitude flight path. A second after the launch, the enemy will notice the launch of the rocket and begin to prepare for repelling the attack.

Speed ​​= 4,5M is not a panacea here. Characteristics of the domestic C-400 allow the interception of air targets flying at speeds up to 10M.

New American Zur "Standard-6" has a maximum height of defeat 30 km. Last year, with its help, the farthest interception of the EC in the naval stories (140 + kilometers). A powerful radar and computational capabilities of Ajis allow destroyers to hit targets in near-earth orbits.

The second problem is a weak warhead. Someone will say that at such speeds you can do without it. But it is not. 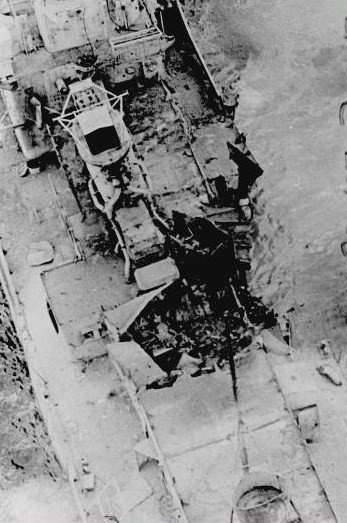 The Talos anti-aircraft missile without a warhead almost cut the target in half (exercise off the coast of California, 1968).

The main stage of Talos weighed one and a half tons (more than any of the existing missiles) and was equipped with a ramjet engine. When hitting the target, the unused supply of kerosene was detonated. Speed ​​at time of impact = 2M. The target was an escort destroyer of the time of WWII (1100 tons), whose dimensions corresponded to the modern MRK.

Talos’s entry into a cruiser or destroyer (5000 — 10000 tons), logically, could not lead to serious consequences. In maritime history, there are many cases where ships, having received numerous punctured holes from armor-piercing shells, remained in service. So, the American aircraft carrier “Kalinin Bay” in the battle of Fr. Samar was pierced through 12 times.

Anti-ship missile "Zircon" warhead needed. However, due to the need to ensure the speed of the 4,5M and limited mass and weight dimensions when placed in the CIP, the mass of the warhead will be no more than 200 kg (estimated based on examples of existing missiles).

Ctrl Enter
Noticed oshЫbku Highlight text and press. Ctrl + Enter
We are
"Zircon": five moves from the targetDomestic tank missiles and shells
99 comments
Information
Dear reader, to leave comments on the publication, you must to register.