Tetris laying bearded "boys" in the political landscape of Syria

February 25 2016
22
It remains two days before the process begins in Syria, officially called the truce of the opposing sides. As is known, the presidents of Russia and the United States came to the decision to launch such a process during the February 22 talks. What is on the agenda of today: the beginning of the Coordination Center at the air base VKS RF "Hmeymim" in Syria. The objectives of the work of such a center, which seemed to be supported verbally by Obama, too, were voiced on the eve of the briefing by the official representative of the Ministry of Defense of the Russian Federation, Major General Igor Konashenkov. These goals look like this:
receiving calls from representatives of local authorities and armed groups about the desire to cease hostilities and begin reconciliation talks using a single telephone number and e-mail address;

providing maximum assistance to all who contact the Center for the organization of contacts and further cooperation with the Syrian authorities to sign agreements on the cessation of hostilities and reconciliation;
interaction with international organizations on the delivery of humanitarian aid to Syria’s population and the return of refugees from other regions, as well as countries.

Americans, as it were, do not interfere with us ... They promised ...

The aforementioned Igor Konashenkov also stated that the work of the Coordination Center was already bearing the first fruits - from several Syrian settlements at once came information that the armed groups operating there wanted to surrender weapon and to join the process of peaceful settlement of the Syrian crisis. Whether they called from these localities on a phone number that Syrian media are distributing, or wrote an e-mail, for example, from London - not reported ...

Against this background, materials are published on behalf of the commanders of individual gangs that they are not going to give up fighting, citing, for example, the fact that after February 27, the Russian AFL should stop bombing positions and “Dzhebhat-en-Nusra” too . In particular, the leader of the Ahrar-ash-Sham cell made a similar statement in an interview with journalists from one of the Lebanese media. According to him, "without the participation of" Dzhebhat-en-Nusra "the negotiation process in Syria is impossible." Come on...

The Ministry of Defense of the Russian Federation such statement as it passed by the ears. As if ... At the same time, it is clearly making it clear: “Vaska listens and eats” - the Coordination Center started its hard work from the start, aimed at the “color differentiation of the pants” of those who really want to live peacefully, and those who can’t stop literally wants to find for itself an eternal shelter in the Middle Eastern sands after arriving from somewhere above OFAB.

The beginning of the work of the Russian (and, in fact, the center, as it should be, is also Russian-American, only here the American “partners”, as usual, wrinkle the most different parts of the body, not wanting to share information about the positions of really moderate ones with the Russian servicemen) is a clear signal To Washington that if you cannot separate moderates from unlimited ones for at least 2's, then it's time to speed up the process with our help. To determine moderation / exaggeration, it seems, a very simple method will be used: if a “commander” of an armed detachment (well, like the one interviewed by Lebanese journalists) suddenly declares that his fighters really want so that “Dzhebkhat al-Nusra” or ISIL are introduced into the “truce” process, then such a commander together with his detachment will have a “tranclusion” with the help of the Russian Aerospace Force and the Syrian Arab Republic. If the commander, together with the detachment, lay down their arms, then in the personal file the status will be “moderate” ... And after all, this approach is able to bear fruit and in a very short time to carry out a real “inventory” of the detachments and groups that flooded Syria in the last 4 of the year .

So, what is required in order for pilots of Russian bomber and attack aircraft to “cross out” on their maps the coordinates of targets that declare their moderation? Nothing extraordinary: report to the Coordination Center (by phone; yes, at least with the help of an unaware official human rights activist from the Syrian Observatory for Human Rights, sitting in the British capital), they are ready to lay down their arms. The time and place, when and where the arsenal will be accepted and described will be indicated. After that, as Vitaly Mutko would say in this case, "criminal know-how is bombing." If the weapon seems to be handed over, but then suddenly the Russian drone with an impartial eye will see the fact that, for example, recognized moderate ladies and gentlemen from Turkey suddenly decided to get the barrel again, forgive me, the Coordination Center will express its disillusionment ... At the same time, the coordinates of the “moderates” will immediately be highlighted in an alarming color with all the consequences - OFABs, BETABs and CABs will not forgive such an error ... They will cut off the superfluous and bulging for better entry into the political landscape of Syria - a sort of Tetris from the Russian Defense Ministry. 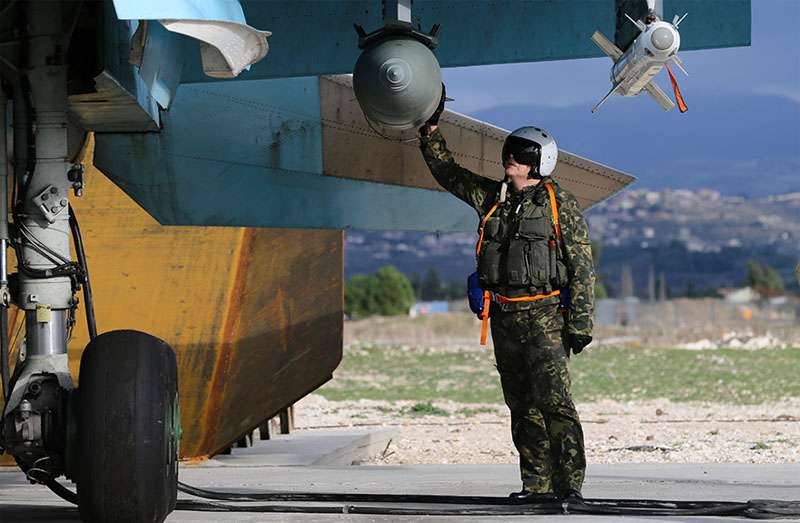 From a political and diplomatic point of view, everything is clear. Russia makes it clear that it is ready to give a chance to those who for some fatal accident or else for some reason turned out to be assigned to terrorists. At the same time, by participating in a humanitarian operation, Russia is enlisting the support of its activities for the greater part of the local population remaining in Syria. Along with the recent victories gained by the Syrian army and the people's militia, this is a signal that the political process may be launched in the near future. If the same Syrian free army or someone else in Syria decides that the conditions of the Russian Federation are not acceptable, well, that will be their choice ...

But the key question here is whether Moscow’s desire will once again demonstrate adherence to the norms of international law, humanity and other tolerance, so that a bearded pack for a month or two will lick wounds, receive new funding, redistribute efforts and deliver a new blow after receiving CC from the curators? I would like to hope that Moscow’s steps have been calculated, but it’s still naive to believe that some “al-Sham” or “al-Islam” will actually gather to lay down their arms voluntarily by calling the Hmeymim Coordination Center by phone. Moreover, there are negative examples. For example, the "pravoseki" in Ukraine for some reason do not express their own desire to get rid of weapons and enter the right field of the country, despite the presence of the Minsk agreements and, as it were, the concerns of the United States. The commanders of the Armed Forces of Ukraine and the Ukrainian National Guard are not willing to stop giving orders to bombard the territory of the DPR and the LPR, again in the presence of the Minsk agreements. Moreover, the Minsk Agreement was at least a piece of paper, and then everything was verbally. And what is “verbally” agreed with the Americans, Moscow should know from the time of promises to the head of the USSR Gorbachev from Washington not to expand NATO to the East. In the end, where is the USSR now, and where is NATO now? ..

In general, the fact is the same - the work of the Coordination Center at the Khmeimim airbase has begun, but to please the “partners” with the fact that the Syrian army’s attack to take control of at least the Syrian-Turkish border has finally stopped, I think, to nothing.

The only obvious benefit from the agreements with Washington today may be due to the fact that Ankara and Riyadh will not be thrust into the SAR. And this is a very important detail, indicating that the second and third fronts of the SAR army, at least in the short term, will not.

Ctrl Enter
Noticed oshЫbku Highlight text and press. Ctrl + Enter
We are
ARMY-2016. Cluster VCS. Part of 2. Space is space!Situational analysis of the death of the MH17 flight (Malaysian Boeing 777), made on the basis of engineering analysis from 15.08.2014
22 comments
Information
Dear reader, to leave comments on the publication, you must to register.