If everyone runs away, who will you stay with, Mr. Zakharchenko?

February 24 2016
230
I know in advance that many things written will not be to your taste. From the fact that the water flows to the mill ukrov, and to the fact that how much can be about this merged Novorossia. How much is needed - so much and you can. This is not about any idea or legal education, it is primarily about people. 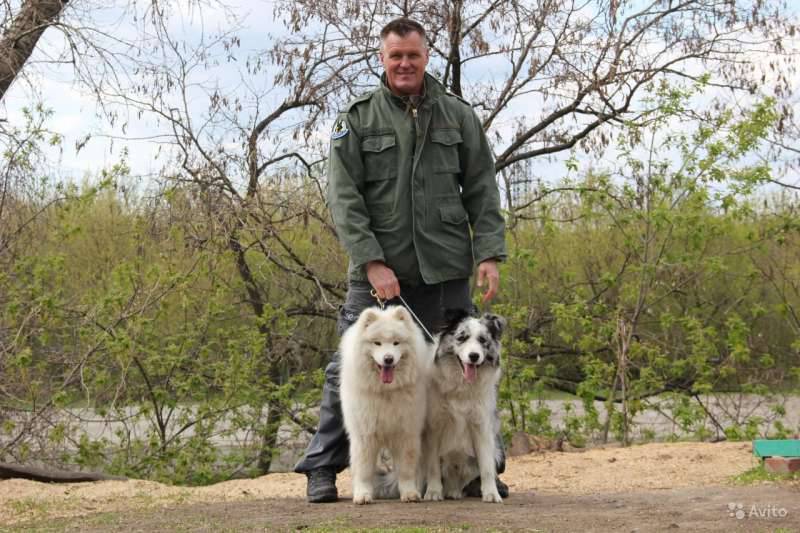 Of course, I may be mistaken, but since the Soviet times, the idea that people are the main value has been driven into many heads (including my own). Weapon, the technique is secondary. If there are people, there will be a battle.

And now directly on the topic.

Just the other day, the DPR left one family. Say, what's new and out of the ordinary? DND leave dozens of families a day for various reasons. The difference is that it was not a planned departure, but a natural escape.

But back to the beginning stories. In the distant 1988 year. When, on the initiative of Captain Vladimir Kolganov, a cynological nursery was established at the Donetsk Higher Military Political School of Engineers and Communications. Who all this time brought up and trained service dogs under the direction of retired Colonel Kolganov.

To say that the name of Vladimir Kolganov is little known, of course, possible. But in the circles of professional master of sports of the USSR, champion of the USSR, the judge of the highest category was quite famous. And his brainchild "Don-Lyceum" was known far beyond the Donetsk region. 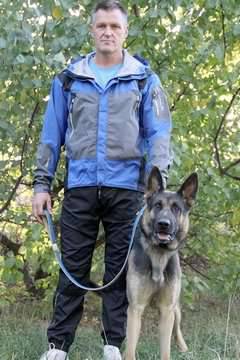 Don Lyceum flourished. And the territory of the nursery as a result of the daily efforts and care of the people who worked there, has also become a favorite place for recreation and leisure. Different people were in a hurry to go there - and adults to spend time in the fresh air, but with a kebab. She loved the nursery and the kids, because here every child’s cherished dream could come true - to play with a real dog. Yes, not easy. Trained shepherds patiently demolished everything that hides communication between an animal and a child, who often do not see the difference between a toy and a living creature.

The war, of course, made its own adjustments. The retired colonel, of course, no longer went to war. Age is not the same. But his four-legged pupils did quite normally serve themselves for the protection of the outskirts of Donetsk. Well, and as a personal contribution of the Kolganovs, all barricades near the television center on Kuibyshev were erected from their building materials. They were planned for another, but the Kolganovs considered it necessary there.

Who would have thought that the trouble would come not with the war, but in peacetime?

When hostilities subsided and passed into the category of incidents, the peaceful way of life and the pre-war habits began to gradually return. And people began to come and come to the nursery, long-timed by the Donetsk residents.

Last October, a company in military uniform came to the nursery to celebrate someone's birthday.

“Yes, I know them perfectly well from college, these are my former cadets,” said Vladimir Kolganov about those guests, not knowing what their visit would result in.

The guests sat and rested, and thanked them and left. A few days later they returned, and not empty-handed. They brought orders to the owners with them ... to leave the territory of the nursery immediately. The basis is the invalidity of documents on the right of ownership. The lease agreement for a plot with an enterprise that owns the land was considered “ukrop paper”. And so that there was no doubt about the effectiveness of the demands and threats, they would distort the gates of the automata. I had to obey.

It turns out that the recent kennels looked so much like a kennel that they decided to simply take their hands on it. Or, as it is now called, press.

Kolganov obeyed. Inventory, which could and had time to pick up, carried out for the territory of the nursery, piled nearby, on the adjacent abandoned site. In the same place, they continued to practice with animals, because training and dressing cannot be stopped for a long time. At the same time, they tried to achieve a fair resolution of the situation, because at some stage the hope was still alive that cases of lawlessness were impossible and unacceptable in the young people's republic, which were not even equal in Ukraine. And this, as it turned out, was their main mistake. For which he had to pay a huge price.

14 February 2016 of the year. That day, as Svetlana Kolganova tells, her husband was engaged with dogs not far from his former kennel, when a black Range Rover with armed men drove up to the training site. One of them, in military uniform, introduced himself as General of the DPR Army Grigory Belyaev. He was ugly drunk. Belyaev was waving a pistol and in an obscene manner demanded Kolganov to leave the place where the training was going on. The rest has already become reminiscent of the scene of the bloody showdown of the action movie about "dashing 90-x."

“Belyaev went out with a shaky gait from the car, demanded the keys to our car, began shooting at the air, beating her husband along with armed men. As ordered, snout on asphalt. They beat me with their hands, feet, butt of a machine gun on the head, all over their body. They killed all the passers-by in their eyes. At my request and the question “What are you doing?” He opened fire in the air, and his guards shot at the ground in front of our feet. Belyaev came up to me and hit me in the stomach so that I fell backwards and hit my head against the asphalt. I threatened me with a gun. Then he directed the pistol in the direction of my daughter, who came to the aid of her father. He kicked her in the stomach, wrung her hand and shot, but the bullet came past. ”

This day the Kolganovs will be remembered for a lifetime. After all, then they beat not just the owner of the nursery, they beat the former Afghan, a military officer who devoted his whole life to the love of animals and people. They were beating him only because he needed the land on which his farm was located.

But the hardest loss is not even a “wrung-out” section. Due to a kick in the stomach, Kolganov’s daughter had a miscarriage. She lost an unborn child.

As a person who seemed to be well versed in the questions of who is who in the DPR, I was interested in “General” Belyaev. However, I do not recall such a general. He turned to his friends in Donetsk. However, they did not know such a commander. No one.

But Grigory Belyaev exists. True, he is not a general. Although he claims that he came to power from the front line. From the militia. 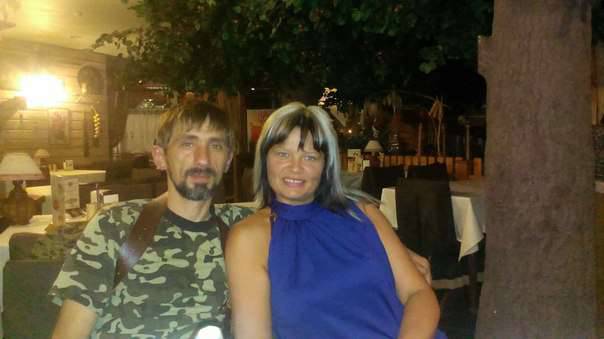 Belyaev, Grigory Vladimirovich. Born in Donetsk 20 June 1975 of the year. We managed to find out quickly about it a little, but that's enough. From education figures secondary school №31. In the work anywhere is not particularly noticed. He fought in the militia. Where, when, as part of a unit - everything is hidden in darkness. 10.09.2015 became a member of the People's Council of the DPR from the Donetsk Republic OD.

Familiar date? Familiar ... It was then that the companions were kicked out of Nargin's council of Purgin and other deputies were quickly appointed to replace them. Or choose it as someone more convenient.

And what does a drunk lover know in Narsovet to shoot and squeeze someone else's? You will not believe. Gregory Belyaev - Member of the Committee on Health, Maternity and Childhood!

Well, General Belyaev protects motherhood, do not say anything. Kicks in the belly of a pregnant woman. It is terrible to imagine how Messrs. Avdeev and Zavdoveev, the chairman and secretary of the above-mentioned committee, “work” if an ordinary worker behaves this way.

Although what he is an ordinary worker? Having brought Vladimir Kolganov in the trunk of his car to the nearest station after beating him and handing it to law enforcement officers there, Belyaev arranged a concert there with promises that the workers of these same law enforcement agencies (and the prosecutor’s office later), except for the council, whisper "Run if you want to stay alive ", nothing more was not capable of.

Of course, threats from such a highly possessed person took effect. Kolganovs fled to Russia. Fortunately there are friends.

The situation raises more questions than answers. If all this is true, and written explanatory and testimony suggests that the Kolganovs do not invent anything, then how is it possible in a state that declares itself a people's republic and proclaims a complete departure from the lawlessness practiced in oligarchic Ukraine?

Or did we somehow get distracted by Syria and did not see the moment when the republic passed into the monarchy? Or, even worse, in a frankly gangster freemen?

Otherwise, how can one explain the utter impotence of the police and prosecutors? And what can people expect who do not have a phone to call and ask for help with a safe escape? Just run without thinking that the new guardians of the "republic" could safely take what they want and cut Russian money?

Excuse me, Mr. Zakharchenko, for the sake of this dozens of militia killed near Izvarino, Lugansk, Donetsk and in many other places? Hardly. And disappointed, people will again stand in line at the border.

And the main question: if all the people run away from the republic, with whom will you stay, Mr. Zakharchenko? With a bunch of candid gangsters deputies? In unfinished places, where you and your henchmen are already frankly starting to hate. The right way go, as they say.

Of course, I went over a little. Do not run away. Not to fight. But what is happening today in the DNI makes very much think about where everything goes. Or rolling. Here we are talking about the purges, sometimes rather incomprehensible, and the total censorship of everything that happens, and many other things.

And we will not be silent about this.

Ctrl Enter
Noticed oshЫbku Highlight text and press. Ctrl + Enter
We are
Zakharchenko in Debaltseve: "This city for us is a symbol of resilience, a symbol of struggle"Situational analysis of the death of the MH17 flight (Malaysian Boeing 777), made on the basis of engineering analysis from 15.08.2014
230 comments
Information
Dear reader, to leave comments on the publication, you must to register.