February 16 2016
156
February 13 from the territory of Turkey on Syrian airfield Minneh and a number of settlements were subjected to artillery strikes. Ahmet Davutoglu said that the targets were the positions of the Kurds. Ankara demands that the Syrian Kurds leave the border areas. Syrian Kurds refused to comply with the requirements of the Turks. Then the word passed to Washington. If the Munich agreements are violated, the coalition led by Washington will introduce additional ground troops into Syria, Secretary of State John Kerry said. Who can stop the Third World War? In Britain, they believe that Putin. He only needs to give up the support of Assad. 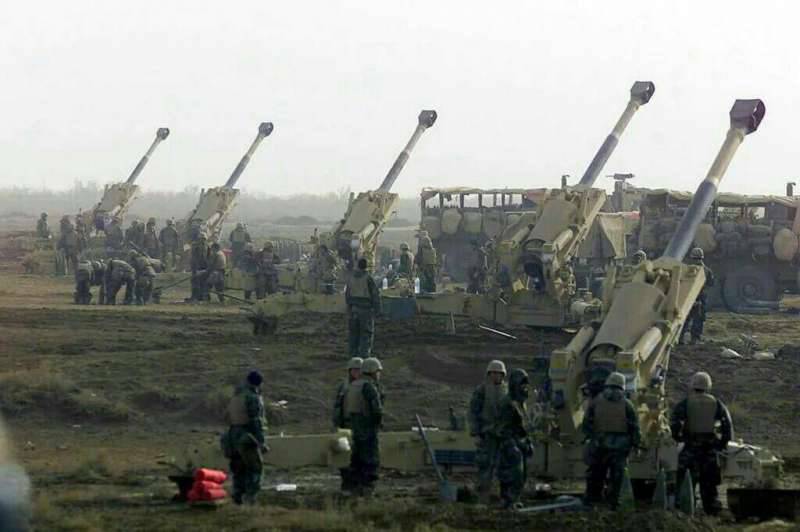 Turkey began a military operation in Syria. The airfield of Minneh and the village, which had recently come under the control of the Syrian Kurds, was subjected to a massacre. Information about the bombing of Reuters was confirmed by human rights activists from the “Syrian Council for the Supervision of Human Rights” and a source in the Turkish government, reports Newsru.com.

Later, Turkish Prime Minister Ahmet Davutoglu confirmed the information about the shelling: “Yesterday and today, the National Defense Forces organization, which is also part of the Syrian regime, attacked the city of Azez. During these attacks, aggression was committed against our borders, that is, a situation arose when we needed to take response measures. There was opposition to a threat to forces in the city of Azez and near it. ”

Turkey will continue to strike at the positions of the Syrian Kurds, Davutoglu said. Turkey will not allow the Kurdish party "Democratic Union" to conduct aggressive actions. According to Davutoglu, the units of the Syrian Kurds are conducting an offensive with the support of the Russian aviation. Their goal is to expel thousands of Syrian civilians from the border region with Turkey. At the same time, the prime minister warned Merkel about a new wave of thousands of refugees.

Turkey, we add, finally got out of hand. It does not obey not only Europe, which almost dictates the conditions, but also the United States.

"Objected" aggressive Ankara and the French Foreign Ministry. According to the French, the artillery attacks on the province of Aleppo, which Turkey has been conducting since last Saturday, destabilize the already alarming situation.

However, Recep Tayyip Erdogan sees the cause of "destabilization" in another.

“For Erdogan, advancing the Kurds in the north of Syria is, as is customary to say, a knife in the back,” Alexey Malashenko of the Carnegie Moscow Center told Gazeta.ru. - Turkey, apparently, was just scared. Kurds, who have long demanded autonomy in the Turkish and Syrian territories, have a chance. In the future, Kurdish autonomy means a very strong blow to both Turkish statehood and Erdogan’s personal authority. ”

Considers particular concern Utro.ru, it causes the shelling of Minneh and its environs after the forces of Saudi Arabia were brought up to the Turkish-Syrian border.

The Saudis, after all, do not hide the fact that the troops deployed here can invade Syria under the guise of fighting the IG.

The arrival of Saudi troops on the border may indicate that Turkey and Saudi Arabia will make a joint attempt to invade Syria. The true purpose of Riyadh will not be the Islamists, but the Syrian government forces and Assad.

As for the reaction of the Kurds to Turkish shelling, they, of course, refused to fulfill the “demands” of Turkey and did not leave their positions in northern Syria. This was announced by the leader of the Democratic Union party Salih Muslim Muhammad. He stressed that Ankara has no right to interfere in the internal affairs of Syria. “If this happens, the entire Syrian people will confront them (the Turks),” he quotes "Reedus" with reference to Reuters.

State Department spokesman John Kirby urged the Kurds to stop using the situation to seize new territories. Kirby got to the point that the Turkish forces attacked the positions of the Kurdish militiamen by explaining that the Kurds "started first".

In parallel, spoke and Secretary of State John Kerry.

In an interview with Orient TV, he said that in case of violation of the agreements reached in Munich, the US-led coalition would introduce additional ground forces into Syria.

"If Assad does not fulfill his obligations, and the Iranians and Russians will not force him to do what they promised ..., then the members of the world community, of course, will not just sit like doodles and watch it," the agency quotes Kerry "Reedus".

If a negative scenario is implemented in Syria, additional land units may appear, he added.

Recall, on the eve of the world powers reached a preliminary agreement during the meeting in Munich. According to the document, the confrontation of the Syrian military and the opposition should stop within a week. The agreement does not apply to groups that the parties to the negotiations refer to as terrorist groups.

At such a tense moment, when the spiral of conflict began to unwind again, Great Britain could not remain silent either.

According to British Foreign Secretary Philip Hammond, the only person who can stop the war in Syria is President Vladimir Putin of Russia. About this, the politician said the TV channel "BBC".

“There is only one person on the planet who can stop the civil war in Syria by making a phone call, and this is Putin,” Mr. Hammond quotes. TASS.

Hammond is confident that "the situation with Assad is exactly the same as it was a year ago: whether Assad will leave or stay, will depend on whether the Russians are ready to use their influence to shift it."

According to Hammond, the situation in Aleppo is “of extreme concern.” "The Russians use the tactics of carpet bombing, indiscriminate strikes on civilian areas held by opposition forces," the minister said.

Moreover, according to him, President Assad’s army is not able to occupy the areas from which the opposition forces are leaving: “The Syrian regime has no forces, no organization to take control of these areas. The Russians use only air forces, they can force the opposition to retreat, but the regime has not demonstrated that it is able to establish control over this territory. ”

Obviously, we add in conclusion that V. V. Putin must call not Hammond - the level is not the same. And not to Cameron. And certainly not the queen. No, Putin should call the boss of the entire planet - B.H. Obama. And agree on what Obama, and Kerry, and Kirby, and the people of the Pentagon, and the people of the CIA, as well as those bearded "oppositionists" in Syria, whom the above-mentioned Hammond has called “moderate” for years, are waiting for, claiming that nothing time has not changed.

And after the "good" on the "departure" of Assad from Putin will wait for another "good" - on the "return" of the Crimea to Ukraine.

The chain of “departures” and “returns” could adequately be completed by another international act: the transfer by Russia of the “northern territories” to their “original” masters - the Japanese.

Kerry would not mind, but Hammond would have applauded while standing.

And Mr. Obama would say that he would think about lifting the sanctions.

Observed and commented on Oleg Chuvakin
- especially for topwar.ru
Ctrl Enter
Noticed oshЫbku Highlight text and press. Ctrl + Enter
We are
Turkey against the Kurds. Is there a new phase of conflict ahead?Syria: Americans scare themselves, and Asma Asad buys chairs
156 comments
Information
Dear reader, to leave comments on the publication, you must to register.