The latest exit commander in chief 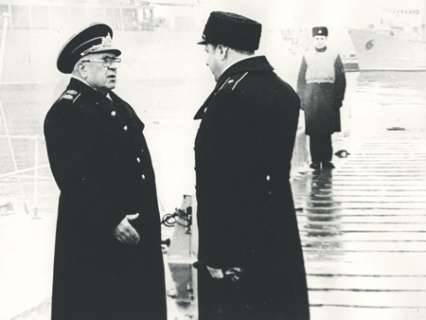 I recall the last trip to the sea of ​​the Commander-in-Chief of the Navy of the USSR Admiral Fleet The Soviet Union Sergei Gorshkov in the Northern Fleet, which took place on October 6, 1984 and fell on the verification of the results of the year conducted by the commander in chief.


Three days before going to sea, I — then the commander of the Red Banner Kola flotilla of heterogeneous forces — received instructions from the commander of the Northern Fleet, Admiral Arkady Mikhailovsky: “Plan a number of tactical exercises of the flotilla at your discretion with the 2 division of anti-aircraft missile firing. To organize the comprehensive provision of the exit of the detachment of ships. In addition, the commander-in-chief plans to familiarize herself in detail with the ships of the third generation of the 1155 project. ” In the latter case, we identified the Marshal Vasilevsky, the newest at that time large anti-submarine ship (BOD).

CASE IS NOT NEW, BUT VOLUME

It was not new, but voluminous, with the involvement of a large number of forces and means. Needless to say, the sea must be up to 80 units of different forces. It was necessary to prepare a multitude of combat orders, draw up a planned table of actions of the forces, to whom, when, where to go, close the vast area of ​​the Barents Sea, including the Kola Bay, send a lot of alerts, etc. By the morning of the day at the flotilla headquarters, the decisions of all the participants arrived. Disturbed pilots. Although the departure from the berth No. 8 of the large anti-submarine ship Marshal Vasilevsky was not appointed early - to the 10.00, but the pilots always worked with the proviso “but ...”.

On the day of the release, as the head of a large exercise, I was summoned to the fleet headquarters early in the morning to report to the commander-in-chief of the exercise plan. We hung out all the cards, prepared other documents and waited for the eldest to appear. Suddenly, the operational duty officer of the fleet reported that the commander-in-chief was already on the pier, where the BOD was located. All quickly turned off, but, of course, late. The commander before us arrived on the ship. Of course, it was not customary to refer to someone, and the commander-in-chief had to report on the navigating bridge.

The diagrams of the exercises were launched at CCU, and there, closer to reality, I gave a report to the commander-in-chief on the episodes of the release and the combat exercises being performed. No questions were received. Mass accompanying S.G. Gorshkov's “officials” directly attacked our documents: they wrote down something, copied it, recounted it, etc.

All forces were already at sea. The large anti-submarine ship "Marshal Vasilevsky" (commander Y. Shalnov) vigorously departed from the pier. On the Kola Bay crossing I had to report to the Commander-in-Chief questions of organizing the interaction of the forces at the exit: with the 42 air defense missile brigade, with the border guards, with the command post of the fighter regiment in Monchegorsk, etc. Anticipating the questions of the commander-in-chief, on alert, the fighters were raised into the air, which flew over the ship in 20 minutes with a decrease.

The commander behind this watched very carefully, said nothing. On the beam about. Toros was already providing support minesweepers who were ready to hand over the trawls to helicopters. Helicopters appeared. They walked low near the ship and flew up to the trawl group. Having solved their task, after some time they flew past the BOD on a countercourse, and at the same time the commander-in-chief personally checked the accuracy of following the ship in the trodden strip. Then S.G. Gorshkov began to tell that there are options for designing unmanned minesweepers and that there are plans for an unmanned large ship of the ocean zone in general. We perceived all this as some kind of fiction.

After processing all the issues with the supporting forces, the Marshal Vasilevsky BOD connected with three patrol ships of the 1135 project from the 130-th brigade of anti-submarine ships, which entered into his escort from the nasal course angles and the speed of the 22 node began to follow to the area of ​​the anti-aircraft exercise. Even at the exit from the bay, a full radio silence was established at the junction, to which the commander-in-chief reacted with approval. Information came from the fleet's command post: “In Norway, the Maryatka was located at such a point, Orion, our“ big ones ”in the air, and so on, took off from the Boudane AU.

ACTIVE PHASE OF THE DOCTRINE

The organization of the exercises was clear, the planning table was performed one to one. I also reported to the commander-in-chief about the actions of our other forces that we could not see. He invited him to the screen "Logger", where the situation was completely highlighted, including the initial points of the aircraft according to the teaching of air defense, but the commander-in-chief, glancing at the screen, passed onto the wing of the bridge. He did not like these screens.

Next began the training on air defense. The commander of the 2 Division V.V. Grishanov (senior) was an experienced sailor, had a good headquarters. In accordance with the TR-80, “unleashed” the system of organization of air defense using all types of AIA, interference, etc. The mass of “officials” who arrived from Moscow was crowded around the screens and with great attention and desire caught every inaccuracy at the air defense post of the division.

At the end of the exercise, as always, data on its results were quickly collected, and the commander of the division reported the results to the commander-in-chief directly on the traces of the air defense post, and also that he allowed the 130 brigade ship search and strike group (KPUG) to the actual rocket shooting.

After the exercise, the ships, having reorganized the wake of the wake, went to the area of ​​the rocket firing. The P-15 rocket targets were supposed to be launched by speedboats who were conducting their exercises on delivering a missile strike on the SSGP. Two cruise missiles were loaded on two missile boats. This was agreed with the Directorate of the Missile-Artillery Armament of the Navy, since old missiles with overdue service life were allocated for such firing, and additional products were reserved for the case of some failure or drop of targets. The commander of the 55 missile brigade, Captain 2 of the rank D. Grechukhin, was headquartered on the control ship (also on the 1135 project TFR) and controlled the boats when striking.

Before striking a KOPUG, the commander-55 on communications, and we put it "on loud", addressed to me, in the presence of the commander-in-chief, he presented his analysis of the situation and the decision to strike. I approved his decision. As for the rest, the situation is as follows: the 1-I target missile - the start is normal, the flight is normal; 2-I - immediately dropped after the start; 3-I - start normal, normal flight; 4-I - start normal, fell at a distance. Then, according to my instructions, the Kombrig-5 launched the 6-th and 55-3 missile targets on their own, without asking anyone. Of course, according to the rocket firing plan, three targets were planned, and four were reached, which were shot down, and they fell into the water at a distance from 4 to 7 km before building ships.

Rocket shooting was dynamic. Ships other than Osa anti-aircraft guided missiles were fired with artillery and interference installations (PC-16). Was ready for shooting and "Marshal Vasilevsky." He was given the task of shooting at self-defense (if anything!).

The commander-in-chief took a good place on the bridge, where he could see everything, after each rocket-target he bent his fingers. Next to him, we put an intelligent signalman, who drew the attention of the commander in chief to the change in the current situation.

After the shooting, while my headquarters was still preparing our express analysis of the shooting, the inspector from the Main Headquarters of the Navy had already jumped to the commander-in-chief and, choking with too much information and joy, immediately reported: "The shooting conditions were violated, instead of three targets, four were launched."

"The simultaneity of the approach to the KSUG missile targets is not provided."

“The disturbance was created insufficient!”

The commander is silent!

And quite quietly, the speaker added: “Inflatable corner reflectors were not discharged” ...

The commander-in-chief did not say a word to all of this, and we knew that he would not say anything, because all the missile targets he saw did not reach the building of the ships, since they were shot down. And this is the main point. After all, it was a real anti-aircraft fight, and everything turned out like a battle. Kombrig-55 also solved its task - a blow to the KPUG. What is reported by telegram.

HELICOPTERS COME INTO THE CASE

After the establishment of the “Combat Preparedness 2, an air defense option”, the team sounded: “The ship is ready to fly helicopters!” Very orderly and quickly this was accomplished. Ka-27PS already loosened the screws. According to the plan, the commander-in-chief was descending on the heavy nuclear missile cruiser (TARKR) "Frunze", which was also located in the open sea not far from us, without going into the exercise area. The commander put on a life jacket and got into the helicopter at the navigator's place. The cruiser, having on board the senior vice-admiral Vladimir Kruglikov, was ready to go to the Pacific Fleet, and the commander-in-chief of the Navy decided to escort the ship. Further, after seeing FARUNZE TARKR off, the commander-in-chief flew to Severomorsk on the same helicopter.

Analysis of the final verification of the commander in chief held in the office of the fleet commander, only with the Military Council of the fleet. Noting the great achievements of submariners in the development of new weapons and equipment, cited the example of the airborne battle of the ship search and strike group of the 130 brigade, which he observed from the BSP Marshal Vasilevsky. He also noted the commander of the 55 th brigade of missile boats, which acted initiatively and precisely at the appointed time, struck a blow at the SSUG with all the missile boats.

The commander-in-chief assessed everything together: prudence, perseverance in accomplishing the task, the state of equipment and weapon systems, a fairly good organization of the work of the staffs, the fleet command ship, the proximity of the situation to what can really happen in war. In general, he, while at sea on a ship, saw what he had taught sailors for many years. He did not comment on any comments from the reviewers. Good commander, that the little things never exchanged, and worked and assessed everything on a large and in the future. Real sailors understood this fully.

After the publication of policy documents and the specification of tasks to the forces for the preparation and combat service, SG Gorshkov and his deputies were leaving for the fleets and checking the clarification of the assigned tasks and the level of work of the commanders and commanders to improve the combat service system.

In the personnel arrangements, Gorshkov practically had no mistakes, and he knew how to grow decent leaders. But, choosing people for leadership positions, he, on the one hand, “did not have a backing”, and on the other, did not forgive even a single slip. Whether it was right or not, I don’t know, but all the activities of the Navy steadily developed and improved, and the main criterion for evaluating the leaders was their combat service experience, the experience of long voyages and solving assigned tasks at sea.