Russia will rearm Serbia, despite the protests of liberals 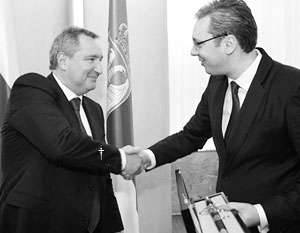 The deal, following which Russia will rearm the Serbian army, is close to completion. And although her need is due to current security issues, in Serbia she met with aggressive opposition from liberal circles. The reason is that the West is significantly increasing the propaganda pressure in the Balkans, while Moscow has let things go there without chance.


After the visit of Deputy Prime Minister Dmitry Rogozin to Belgrade, talks on large-scale Russian supplies weapons in Serbia moved to the practical plane. All kinds of rumors, primarily related to armaments, which can be described as strategic or offensive, immediately disappeared. However, the General Staff of Serbia has yet to develop an idea of ​​the nature of the hostilities under which the new Serbian army will be created (with Russian participation).

In Serbia, reports about the possibility of re-equipping the army with the latest Russian weapons caused a mixed reaction. Back in January, this became the main topic for the Serbian media and gave rise to many local politicians of pro-European orientation. A particularly negative reaction was caused by the possible supply of C-300 systems, but this negative was determined not so much by political as by financial considerations. Another thing is that Serbian politicians, political scientists and journalists who opposed this kind of supply specifically highlighted the financial theme, deliberately forgetting considerations of a higher order, for example, the security of Serbia. This is a well-known technique, when more mundane arguments are opposed to things that are much more difficult for the philistine understanding: “oil instead of guns” in the pre-election period is a prettier slogan than “guns instead of oil”. The bottom line is an almost perfect scheme for putting pressure on the government.

The next step is the assertion that Serbia needs defensive rather than offensive weapons. It does not need to explain to the reader that the air defense system, by definition, defensive. The substitution of concepts, however, does not lead to a change in the emotional attitude in society. In general, the liberal and pro-European newspaper "Blitz", which spoke about the "offensive" nature of C-300, conducted a survey among readers: "Should Serbia buy weapons from Russia?". 58% were in favor, 23% was against, and 19% thought that Serbia should produce the weapon itself. 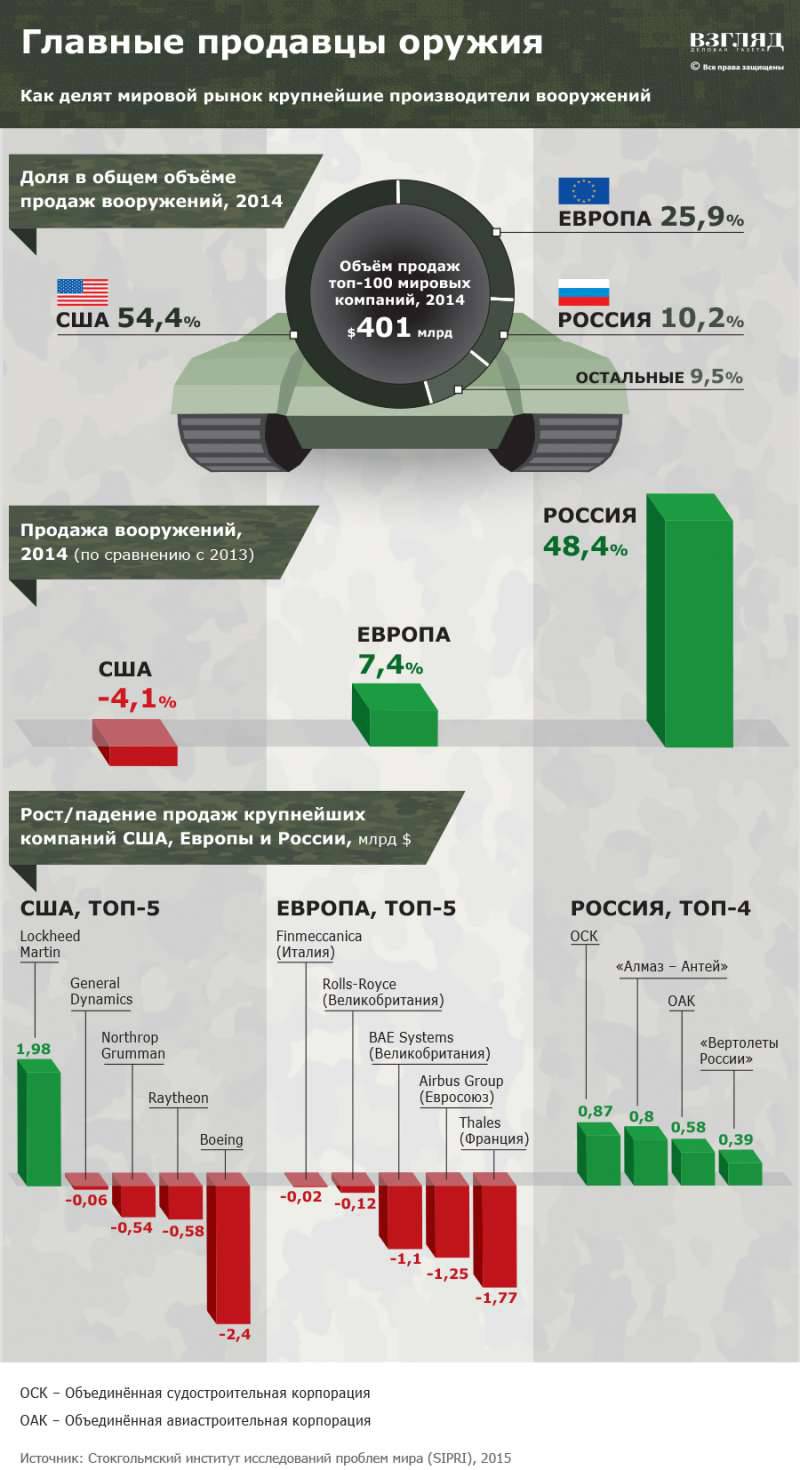 Russia's share in the global arms trade (infographics)
An example of another information warfare tool being conducted now in Serbia: some near-government sources in Belgrade claim that the Vucic government is not going to buy weapons from Moscow at all, but only leads the Russian delegations by the nose. Serbia has no obvious financial opportunities to make such purchases, therefore, Vucic only imitates the negotiation process.
Meanwhile, the issue of the supply of Russian weapons to Serbia has been practically resolved, and now we are talking about technical details, but financial ones as well. At the same time, Moscow does not even think of interfering in the internal processes in the Balkans, responding to the changing situation in the region only at the request of the Serbian partners. The arms race in the Balkans began Croatia, announcing the purchase of medium-range tactical missiles. This decision will unbalance the balance of power in the region, and Serbia’s desire to protect itself naturally. In the end, the Serbian-Croatian conflict has centuries and is not connected with the political position of Moscow. It was, is and will be, just Zagreb will complement it with cruise missiles, and Serbia with Russian air defense systems and the rearmament of the land army.

The option of re-equipping the army that Moscow is inclined to offer to Belgrade does not provide for the supply of strategic systems, but purely front-line, tactical ones. We are talking about "Torahs", "Carapace" and "Buk", that is, air defense systems of frontal defense and operational space. Tor is designed to support tank both in defense and in the offensive, so that it is not distracted by attacking attackers. The Buk provides the depth of defense of the front, and the Shell is generally a short-range system, which is also located on wheeled platforms (that is, it cannot be classified as offensive).

For the Serbian General Staff, this means a turnaround in strategic planning. C-300 with a range of 300 kilometers, of course, is able to create an umbrella not only over Serbia, but also over the border areas, from which Croatia is indignant. But theoretical conflicts in the Balkans now do not provide for strategic bombardments, as in the days of President Bill Clinton, and the “ordinary” war requires just such a system of rearmament of the army, which is proposed by Belgrade Moscow.

As for the financial issue, there are many ways in the arms trade to avoid instant payments through the credit system. Such operations are common and do not cause difficulties. But this, of course, does not interfere with the liberal part of Serbian politicians and the media in the pre-election period to submit an agreement with Russia as the purchase of “expensive toys” and “imperial enslavement”.

A separate topic is a reaction to the public statements of Rogozin, who never concealed his negative attitude towards the desire of a part of the Belgrade political beau monde to join the EU by any means. Thus, the spectacular blonde Zorana Mikhailovich - Deputy Prime Minister in charge of transport, infrastructure and (important!) Energy - recommended Rogozin "to take care of her state, and not about Serbia." She would not have been asked because the army and armaments are not in her competence, but it is Zorana Mikhailovich who is negotiating the supply of Russian gas to Serbia, taking care of transit through Ukraine to the detriment of detours. However, the position of Mikhailovich was not always so unequivocal. For example, she advocated the supply of agricultural products to Russia bypassing European sanctions. In her present words there is not a lot of personal or principled anti-Russian, rather, it is a usual attempt for the Serbian government to sit on several chairs at the same time, explaining this ballet pas “enemies around”. With such an ambiguous government, of course, difficult to deal with, but it is necessary. For example, the chairman of the moderate Democratic Party of Serbia, Sanda Rashkovich-Ilic, demanded that Mikhailovich disavow his words as “non-diplomatic”. This purely female (which is typical of the Balkans) controversy has not yet been completed, especially since Sanda Rashkovich-Ilic has already traveled to Crimea, which has earned a solid “anti-European” reputation, and this is very easy to use in modern Serbia in the election campaign.

It is worth noting that when supplying Russian weapons, the Serbian side receives many additional preferences that are not related to weapons. So, there is evidence that Russia has agreed to act as an intermediary in the negotiations between Belgrade and Astana on the confusing issue of supplying Serb components for the production of Fiat vehicles in Kazakhstan. Another example is the possibility of replacing components for Russian KamAZ with Serb instead of forbidden to import Turkish.

As a result, even the most notorious opponents of the Russian-Serbian deal should recognize that Serbia gets much more than what it will pay for in fact. While the contract with Serbia for Rosvooruzhenie will never be the largest, although it allows us to speak of a fundamentally different level of Russian influence in the Balkans. Moscow again found itself in a system of tough competition, but if the United States and NATO joined in this struggle with the methods of “soft power”, as well as financial and intelligence schemes, then Russia has “soft power” problems, despite the traditionally good relations between peoples and individuals. . Now in Belgrade only one Russian private informational and educational agency, the Russian Expres, survives with great difficulty, and the scale of the European and American presence is enormous. Kusturica film festivals alone cannot solve problems here, although they are important.

To summarize The technical aspects of military-technical cooperation between Russia and Serbia will be corrected several times, but this is already work for specialists of the general staffs. The fundamental decision to re-equip the Serbian army with the Russian types of weapons that it now needs is taken. And we were not the first to start an arms race in the Balkans. The main question is how it will end.

Ctrl Enter
Noticed oshЫbku Highlight text and press. Ctrl + Enter
We are
"Islamic state" in the Balkans?Oleg Valetsky about the wars in the Balkans, their causes and Russian volunteers
42 comments
Information
Dear reader, to leave comments on the publication, you must to register.