Loss and return of the Far Eastern islands

February 12 2016
53
In the fifties of the 19 century, Japan, taking advantage of the difficult situation in which Russia found itself during the Crimean War, decided to seize part of Sakhalin and the Kuril Islands from Russia. In January 1855, the Russian mission led by Rear Admiral E.V. Putyatin signed the Treaty of Simoda, according to which the border was laid along the Vault of Fries. Iturup, Kunashir and the Small Kuril ridge retreated to Japan, which pledged to maintain neutrality for this, but did not fulfill this obligation. Since Russia was at war with England and France at that time, it needed the neutrality of Japan.


The conclusion of a treaty on diplomatic and trade relations between Russia and Japan by the British and French was naturally met with hostility. Meanwhile, the Japanese appetites for the Russian lands more and more inflamed. In 1868, after the “Meiji Revolution” in Japan, a special department was established to colonize southern Sakhalin. In the 1875 year, under the Petersburg Treaty, Russia had to give up all the Kuril Islands, in exchange for Japan’s refusal of claims to Sakhalin. Not much time had passed, and the Japanese were already planning to seize Primorye, Kamchatka and Sakhalin. And in 1905, during the Russian-Japanese war on Sakhalin near Korsakov, the Japanese landed troops. For the expansion of the Russian island, 12 battalions, a squadron and a machine-gun crew with a total of 14 000 soldiers and up to 18 guns were involved. The landing force supported the 40 of sea vessels. 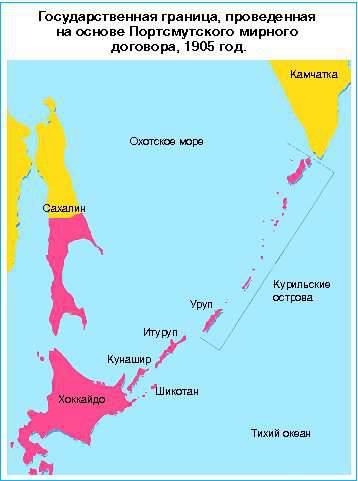 Detachments of Russian soldiers and squads of deportees, headed by personnel officers, put up stubborn resistance to the invaders. However, the forces were unequal. In the very first days of the battles, the governor of Sakhalin, General Lyapunov, together with his staff, surrendered, and this decided the outcome of the struggle. 25 August 1905 Russia, under pressure from the United States, signed the unjust Portsmouth Treaty, under which the southern part of Sakhalin was lost. Russia lost in the east to the ocean.

In November 1918, admiral Kolchak was proclaimed the “supreme ruler” of Siberia. The Kolchak government intended to restore penal servitude on Sakhalin. But did not have time. Although the archival documents were found evidence of their atrocities, including on Sakhalin. 14 July 1919, the punitive detachment on the steamer "Fuse" arrived in the city of Aleksandrovsk. The trial of the Bolsheviks was perpetrated on this vessel, after which they were shot there.

The Japanese enjoyed the civil war in Russia in their own interests. In exchange for military and economic assistance to Kolchak, they demanded that they be given the right to exploit the natural resources of northern Sakhalin, hoping over time to occupy this part of the island. 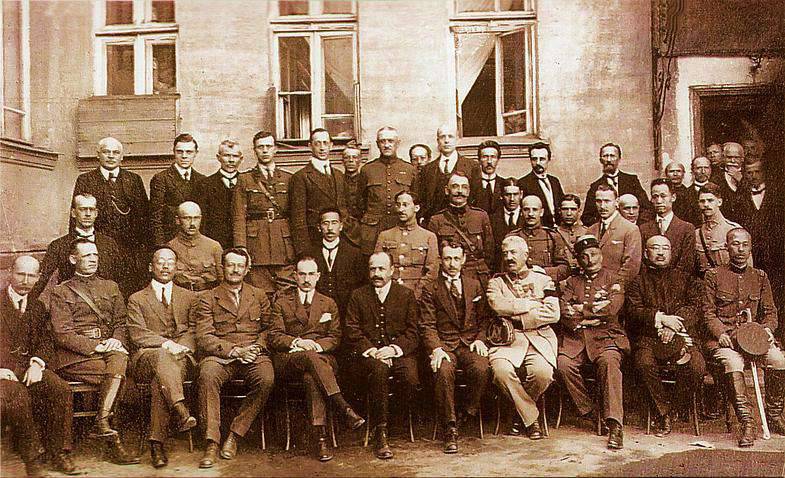 Representatives of foreign missions in the courtyard of the State Bank building
after inspection of the gold reserve. Omsk, summer 1919 g. First row from left to right sixth I.I. Sukin.

Foreign Minister of the Kolchak government, Sukin, wrote a telegram from Tokyo to Foreign Minister Sazonov: “We take into account the need to meet Japanese aspirations, especially with respect to Sakhalin ... But we consider it necessary to make this dependent on negotiations with Japan to find out how our relationship with the latter is, so and receiving military and economic assistance. " But by the end of 1919, the Kolchak army had been destroyed by the Red Army.

In 1920, citing an alleged threat to the Japanese nationals of southern Sakhalin, the commander of the Japanese fleet Admiral Hiroharu Kato sent the battleship Mikaso and the cruiser Misimi to the shores of northern Sakhalin, and in April a two-thousand-strong detachment of the Japanese landed in the port of Alexander, capturing the city. Thus began the occupation of the northern part of Sakhalin Island. The Russian population was considered as the population of a conquered country, with all the ensuing consequences. The situation of small nationalities was especially difficult. From starvation and disease, whole camps and villages died out.

In 1925, as a result of internal turmoil in the country, Japan signed an agreement on the transfer of northern Sakhalin to Soviet Russia.

Having practically defeated fascist Germany, on April 5 of the year of the USSR 1945, the USSR denounced the treaty of neutrality with Japan, which unceremoniously violated it. 8 August 1945 was presented to the Japanese ambassador in Moscow that the Soviet Union considered itself at war with Japan and August 11 of the compound and part of the 56 Infantry Corps of the 16 Army under the command of Major General A.A. Dyakonov moved to active hostilities. Persistent battles began for the acquisition of strongholds in the area of ​​the post of Handas for access to the front edge of the main defensive line of the enemy - the Haramitogsky fortified area. At the same time, bypass actions of the 179 Infantry Regiment from the southeast through Muika (p. Pervomayskoye) captured the Coton railway station (Pobedino station) to strike from the rear in the fortified area of ​​the enemy.

The Japanese had strongholds along the entire Soviet border along the fiftieth parallel. The Haramitoghon fortified area had 17 reinforced concrete pillboxes, 31 artillery and 108 machine gun bunkers, 28 artillery and 18 mortar positions, to 150 shelters, wire barriers, minefields and anti-tank ditches. The area near the fortified area was completely covered with forest and swamps.

In the morning of August 16, 1945, units of the 79th Infantry Division in cooperation with the 255th aviation the division attacked the enemy’s powerful fortifications from the front and from the rear. The Japanese put up stubborn resistance, turned into counterattacks. They held every meter of land under fire. Particularly stubbornly resisted machine gunners - suicide bombers, often chained in reinforced concrete casemates. In battles on the outskirts of the fortified area, the sergeant of the 165th Rifle Regiment, Sakhalin resident Anton Efimovich Buyukly, fought heroically against the enemy. When, due to the continuous machine-gun fire from the Japanese bunker, the company’s advance was delayed, Buyukly crawled through the open area to the bunker and covered his embrasure with his body, thereby opening the way for the attacking unit. 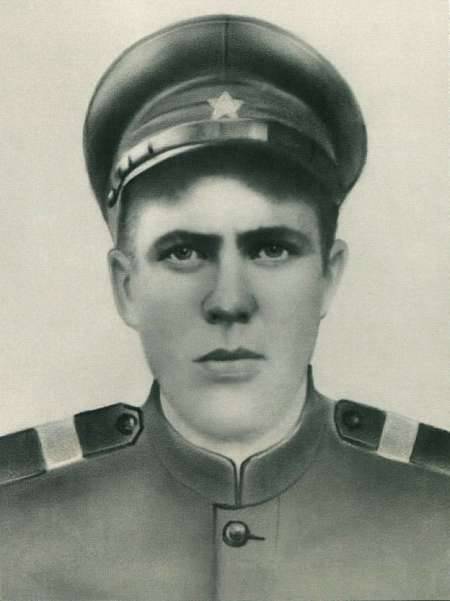 The assault on the fortified positions of the enemy lasted for three days. Much of the Japanese fortifications were destroyed. By the end of August 18, the Soviet soldiers, having broken the fierce resistance of the Japanese troops and divided their defenses into two isolated groups, seized the Kharamitog fortified area. The Japanese command capitulated. The remains of a garrison of more than three thousand soldiers and officers surrendered.

The heroic raid to the rear of the enemy on the roads and swamps in order to master the Coton railway station made the third battalion of the 179 Infantry Regiment under the command of captain Leonid Vladimirovich Smirnykh. His battalion, being on the most critical sectors of the battle, with bold and decisive actions, broke the resistance of the enemy, repulsed several counterattacks and successfully completed the task. But the battalion commander died the death of the brave. 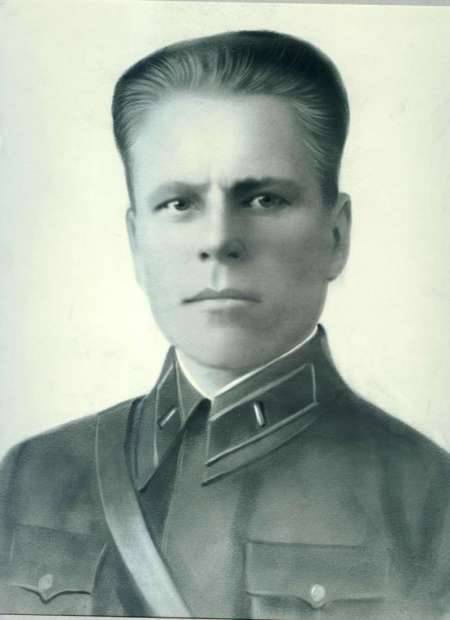 At this time, the fierce battles of our landing with the Japanese aggressors continued on the west coast. The ports of Toro (Shakhtersk), Esutoru (Uglegorsk), Maoko (Kholmsk) were all on fire. A bloody battle broke out on Kamyshevoy pass, where the Japanese had shot every meter of terrain. Therefore, the Soviet troops had to fight for every mound, every piece of land. On August 24, the avant-garde units of the 56 Corps under the command of Major General Alimov entered the city of Toyohara (Yuzhno-Sakhalinsk). 25 August 1945, the troops of the Second Far Eastern Front completed the liberation of the entire southern half of Sakhalin Island from the Japanese invaders.

But the Kuril Islands were still occupied by the Japanese. The battles for their release were difficult. Over the long period of occupation, a great many coastal batteries, bunkers, bunkers, underground galleries, trenches, trenches, minefields and wire fences were built here. The northernmost islands of Shumshu and Paramushir were especially fortified. The enemy concentrated a significant number of troops and tanks. The battles for Shumshu Island lasted five days. Immortal feats in the battles for the liberation of the Soviet land were made by foreman of the first article Nikolai Vilkov and sailor Pyotr Ilyichev, both of them repeated the feat of Alexander Matrosov (nee Shakirzyan Mukhametzyanov). At the same time, they covered two embrasures of the Japanese bunker with their bodies.

August 30 Commander of the Kuril assault operation, Major General A.R. Gnechko reported to the front commander: "The Kuril Islands have been liberated and returned to our Homeland." In accordance with the Decree of the Presidium of the Supreme Soviet of the USSR, “since 20 September 1945, all the land with its subsoil, forests and plants in the southern part of Sakhalin Island and the Kuril Islands is state property, that is, the national property.” 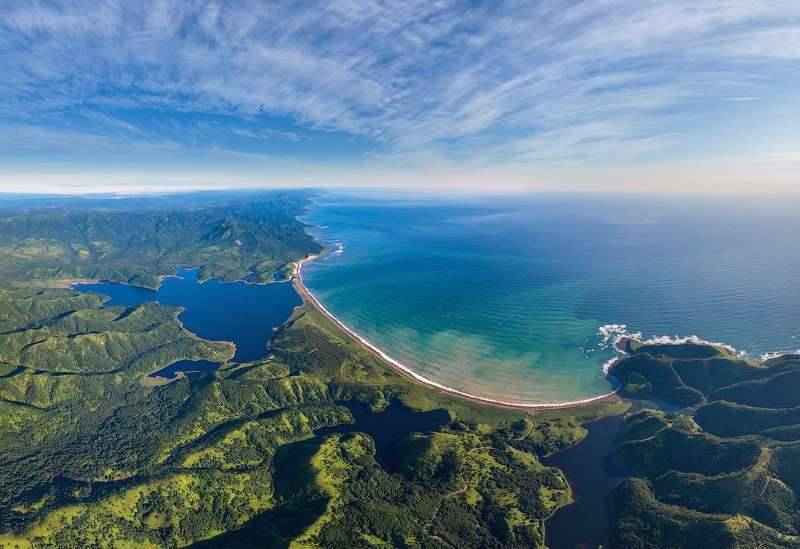 And today, looking over the map of Sakhalin and the Kuriles, we see in the names of many villages and cities the names of those who discovered, mastered and liberated these glorious Russian islands without sparing their stomach, for the good of the Fatherland.

Ctrl Enter
Noticed oshЫbku Highlight text and press. Ctrl + Enter
We are
Tract from the chestWhy there is no peace treaty with Japan
53 comments
Information
Dear reader, to leave comments on the publication, you must to register.