On foot to the prosecutor's office 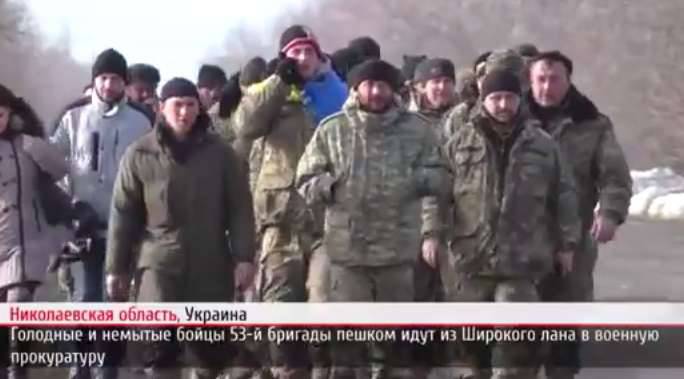 While the Ukrainian government scattered with further promises to raise wages to servicemen, the military personnel from the 53 separate mechanized brigade, based in the Nikolaev region, went on foot to the military prosecutor's office in the city of Nikolaev. The reason for this was the attitude of the command to their provision, contentment and accommodation. In short, the soldiers of the Armed Forces of Ukraine are categorically dissatisfied with the conditions of their placement at the Wide Lan range.

The fighters talk about the monstrous living conditions that the “caring” Euro-Ukrainian authorities provided them, and personally the President himself. Namely, mattresses with bedbugs, expired drugs - despite the fact that the soldiers don’t get any help from the volunteers, everything is taken out of the brigade’s territory by trucks, it’s not known where or why.

In addition, the soldiers have to sleep almost in the snow, there is nowhere and nothing to wash, as they even have water in short supply.

The servicemen claim that they repeatedly appealed to the high command on this occasion, but there was no reaction, and therefore they decided to go on foot to the military prosecutor's office.

A scheduled meeting with the military prosecutor of the Nikolaev garrison of the Southern region of Ukraine took place. As a result, his side was followed by a promise to test and understand the situation without fail, and if violations were found, the guilty would be punished.

Of course, no violations will be found, and the perpetrators, respectively, too. It has long been no secret how the mobilized soldiers live in the Ukrainian army. And this mess is going on in almost all its parts.

These circumstances are evidence that official Kiev is not at all ready for the resumption of hostilities with the Donbas militia. But this does not interfere with Mr. Poroshenko to praise his brainchild - the “invincible” APU, despite the fact that in a short time these APU will be put on his number, probably for all the “good”. But this later, and now the president can’t stop “militarizing” the country, declaring an endless number of mobilizations and promising fabulous earnings to those who are not afraid to take weapon.

After all, if you dismiss the soldiers home, and to make peace with Novorossia, the career of the supreme commander will instantly stop. Well, and for their deeds will have to answer not only to their citizens, but also at an international court ...

Ctrl Enter
Noticed oshЫbku Highlight text and press. Ctrl + Enter
We are
What you didn't want to know about EnglandMy humble experience (survival instruction)
53 comments
Information
Dear reader, to leave comments on the publication, you must to register.