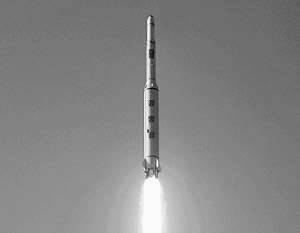 DPRK authorities have announced the successful launch of a satellite into space. The launch of the launch vehicle itself sharply condemned the entire international community, suspecting the North Korean authorities of testing the ballistic weapons. Pyongyang’s latest violation of the UN Security Council resolution allowed the United States and South Korea to begin negotiations on the deployment of a US missile defense system in the south of the Korean Peninsula. China immediately expressed "serious concern."


Leading countries of the world sharply negatively perceived the launch of a North Korean rocket on Sunday night. This time it is about launching a satellite into space. In the DPRK, they say that everything went well. In South Korea, talking about a failed attempt. But everyone is concerned, since the launch of this type of missiles from the territory of North Korea is prohibited by UN Security Council resolution.

North Korea should stop provocative actions, said UN Secretary-General Ban Ki-moon, commenting on the launch of the satellite by Pyongyang. The US, South Korea, Japan, Russia and China reacted badly.
“We are compelled to state that Pyongyang did not heed the calls of the international community, once again demonstrating defiant disregard for the norms of international law,” the statement said on the Russian Foreign Ministry’s website.

China, for its part, made a presentation to the DPRK Ambassador in Beijing after launch. According to the representative of the Ministry of Foreign Affairs of the PRC, Hua Chunin, the DPRK should have the right to the peaceful use of outer space. However, at the moment, her right is limited by a UN Security Council resolution, reports Xinhua.

One of the South Korean politicians, leader of the Senuri party, Lee Chol Wu, on the basis of common concern, even suspected Russia of supplying parts for the DPRK missile. He also said that the satellite launched by the DPRK weighs only 200 kilograms - an insignificant mass, according to the parliamentarian, for a spacecraft. A normal satellite, according to him, should weigh 800 – 1200 kg. Thus, Lee Chol Wu says, the launch should be considered precisely as a test of a ballistic missile, Yonhap reports.

Meanwhile, the actions of Pyongyang, the United States decided to use in order to begin negotiations with Seoul on the deployment of its missile defense system in the south of the Korean Peninsula.

"The United States and South Korea have agreed to start an official discussion on the possibility of deploying THAAD complexes in order to increase the missile defense capabilities of the US-South Korean alliance," said a South Korean defense spokesman, TASS reports.

In response to this decision by Seoul and Washington, China expressed "grave concern." “All countries, striving to ensure their security, should keep in mind the security interests of other countries, as well as peace and stability in the region,” the PRC Foreign Ministry stressed.

Experts are sure: as Washington once intended to deploy missile defense in the Czech Republic and Poland, allegedly against Iran, so now the new system in Korea will first of all become an element of deterrence not China, but China and, possibly, Russia.

“The latest launch of the satellite rocket was not even a pretext, but an excuse for negotiations behind the missile defense complex going on backstage between Washington and Seoul for a long time,” Alexander Zhebin, head of the Center for Korean Studies at the Far East Institute of the Russian Academy of Sciences told the VIEW newspaper.
At the same time, according to the expert, the nature of these anti-missile systems suggests that they are not created to destroy North Korean missiles and protect against the DPRK, but to intercept Russian and Chinese missiles, in case "if such an incredible situation arises ".

Negotiations between Seoul and Washington over missile defense were previously known from various unofficial sources due to leaks. “Thus, everything was planned long ago. But the Americans needed a good excuse to declare this and justify the existence of their missile defense complex. In this sense, Kim Jong-un is a very convenient figure with whom the United States never tried and did not want to negotiate anything, rejecting all attempts. And what could be otherwise? Imagine: tomorrow, as a result of negotiations, the DPRK would agree to surrender its nuclear weapons. But then the Americans would not have been able to talk more about the North Korean threat, could not have explained the deployment of their missile defense system, and not only in Asia, but also in Europe. And then the real picture would open to everyone at once, that all these complexes are directed against Russia and China, ”he explained.

The expert also stressed that North Korea today has not made a single successful intercontinental ballistic missile test. Even the Pentagon recognized this in its analytical report to Congress. It has never been recorded that a rocket flew several thousand kilometers, entered the dense layers of the atmosphere, overcame pressure there and delivered a charge to the target.

“Thus, there is no real threat from the DPRK. But the United States has the opportunity to deploy missile defense, and even try to break the objectionable (North Korean) regime with the hands of Russians and Chinese, so that later American troops could reach the land borders of Russia and China, ”he added.

In this regard, the position of one of the main candidates for the presidency of the United States, Donald Trump - “let China solve the DPRK problem” - is very typical of Washington, said Jebin. “This is such an American ploy. The Chinese have already tried to seat Pyongyang and Washington at the negotiating table. But the Americans did not sit down and tried to strangle the disagreeable regime with the Chinese hands. But, I think, Beijing should have enough restraint and wisdom not to succumb to such things, ”he concluded.

Literally, Trump during the pre-election debate said: “China says that it does not control the DPRK. In fact, they completely control the DPRK ... Let China solve this problem. ”

An interesting point of view on the situation was also expressed by the head of the State Duma Defense Committee Vladimir Komoyedov. “This area is becoming rocket-prone for Russia,” he stated. And although “it is necessary to punish the DPRK with something,” you first need to think about how to do it and whether it is worth it.
Komoyedov also noted that plans to deploy the THAAD American missile defense system in South Korea threaten Russia's security. According to him, this is a threat to the nuclear forces of Russia. "This, of course, is not to dig up the beds, so that by the morning it will be ready ... But in a planned manner such systems can be built," he says, Interfax.

As one of the options that would allow control over the development of armaments in North Korea, he suggested including this country in the “nuclear club”.

We add that, according to South Korean intelligence, North Korea is already preparing another, fifth, nuclear test.

12 January North Korea announced the adoption of a thermonuclear charge.

6 January Pyongyang announced that he had conducted the first hydrogen bomb test, the existence of which had previously been mentioned by the DPRK authorities. The Comprehensive Nuclear-Test-Ban Treaty Organization (CTBTO) confirmed that the “unusual seismic event” in the DPRK was a man-made explosion. However, this international organization noted that the explosion in North Korea was not powerful enough to talk about the hydrogen bomb.

Ctrl Enter
Noticed oshЫbku Highlight text and press. Ctrl + Enter
We are
Morning freshness with a nuclear flavorSay a word about poor Japanese
73 comments
Information
Dear reader, to leave comments on the publication, you must to register.