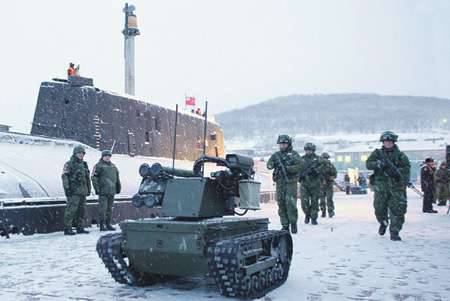 The site DEBKAfile, which is allegedly linked to Israeli military intelligence, has published material on the use of Russian military robots by the Syrian government army. The Bellingcat portal and the Maxpark network also wrote about this.

According to DEBKAfile, which now widely diverge on the Internet, the Syrian troops use the tactical developments of the Russian military and their equipment, including the latest prototype robots developed by domestic scientists. We are talking about robotic complexes "Platform-M" and "Argo". Both robots, according to the site, are equipped with heavy armor and are capable of participating in combat operations at any time of the day, regardless of weather conditions. At the same time, Platform-M is designed to collect information, detect and destroy various targets. It also provides fire support for connections when relocating or moving over rough terrain. At the same time, the platform can be equipped with semi-automatic or automatic fire control systems.

But the all-terrain vehicle "Argo", according to DEBKAfile, was introduced to participate in operations on cross-country and mountainous terrain. Recently, the Syrian rebels, fighting against the regime of Bashar al-Assad, were repeatedly subjected to shelling from the remote-controlled robots, the site claims.

Interestingly, for the first time a post about the use of the Russian military robots by the Syrian army was published on the eve of the New Year in the Maxpark network.

It was reported that the Andromeda-D automatic control system was deployed to Syria for combat testing. Moreover, with the help of this technology and the support of Russian paratroopers, as follows from the message, the Syrian troops managed to take the strategic height of 754,5. At the same time, six Platforma-M complexes and four Argo robots participated in the attack. In addition, they were assisted by Acacia self-propelled artillery mounts (this, if anyone does not know, the Russian 152-mm self-propelled howitzer. - V.Yu.).

In addition, according to the blogger, the UAVs watched the battlefield from the air, transmitting information to the deployed field center “Andromeda-D”, and also to Moscow to the National Defense Management Center, the command post of the General Staff of Russia. The combat robots, self-propelled guns and drones, he paints, were tied to the Andromeda-D automated control system. The head of the attack on the altitude in real time commanded the battle, the operators of combat robots, while in Moscow, conducted the attack, each saw his own battle site and the whole picture as a whole. UAVs, in turn, controlled all movements of the enemy. Artillery strikes were inflicted on the targets detected, literally 20 minutes after the attack of the combat robots began, the enemy retreated, leaving behind the dead and wounded. Subsequently, on the slopes of the height 754,5, almost 70 were killed, while the Syrian soldiers did not have any dead. The number of wounded did not exceed four people ...

I see how serious people in uniform already laugh at this publication, ironically about me, they say, why does the military journalist retell all this nonsense, which is nothing but the violent fantasy of a certain author practicing in creating information fakes. Of course, they are right, it was not worth paying attention to it, if ...

If after the publication in Maxpark 25 of December, the respected Sputnik agency did not report on taking the heights using Russian UAVs with reference to the WarFiles portal. And then this information attracted the attention of Bellingcat employees, who conducted their analysis of publications from the social network Maxpark and Sputnik, and at the time these lines were written, the material about the use of the Russian military robots by the Syrian army appeared on Newsru.com, it was referred to other sites, even authors of reputable and respected newspapers have pecked at it ... And, as they once said, "socialism is sweeping the planet."

JOKES OF PORTURE ARE NOT ALL INNOCENT

Moreover, the fact that the Syrian army used Russian military robots was sucked from the finger of a non-existent fact that Russian President Vladimir Putin was taken out of context at the annual big press conference, which, speaking about the participation of Russian Aerospace Forces and military sailors against the terrorists of the “Islamic State” (IG - an organization banned in the Russian Federation), said that “it is difficult to imagine the best teaching”. And DEBKAfile, moreover, screwed here another misinformation that Russia supplies weapons an organization that the US considers a terrorist, namely Hezbollah. And not just weapons, but heavy weapons, including tactical long-range missiles (?!), Projectiles with a laser guidance system and anti-tank weapons.

Referring to his interlocutor, whom he calls commander Bakr, DEBKAfile claims that at present Hezbollah and Russia are strategic allies in the Middle East. According to the field commander, the participation of the Russian Federation in the air operation in Syria has changed the course of ground military operations, which Hezbollah, with the support of Iran, is leading in the territory from Latakia to Idlib province. The armament of the group, the site claims, includes about a thousand installations of multiple rocket launchers and more than 100 thousand missiles to them, receiver artillery, unmanned aerial vehicles and anti-ship missiles of Iranian production, as well as various anti-tank missile systems, including Russian RPG-29 and RPG-7B. There is evidence of the presence of Iranian-made Zelzal-2 operational-tactical missile systems for militants with a range of up to 200 km, capable of striking the center of Israel.

So, interfering with the real facts and fictions, foreign media are trying to cast a shadow on the fence, to discredit our participation in the fight against terrorists in the Middle East, and to help Russia to the legitimate government of Syria in getting rid of the militants of the Islamic State. Why this is done, in principle, is understandable. It is very easy to stick the transfer of fighting robots by the Russian military to the Syrian government army’s inventions about the Russian missiles shooting peaceful Syrian citizens. For the same purpose, to show that the Russian cyborg anonymously, without exposing their faces, the hands of the Assad soldiers kill the Arab population. The calculation is simple: the excitable population of Middle Eastern countries instantly believe in it. With all the ensuing consequences.

Why I did not officially respond to this publication in the domestic Ministry of Defense, I don’t know. Maybe it’s because you don’t throw a handkerchief on someone else’s mouth, you don’t hesitate for every sneeze. Maybe because they are tired of refuting various nonsense. Even the most sophisticated. At least not a single press conference in the military department, not a single briefing can do without the head of the Press and Information Office, Major General Igor Konashenkov, not lead and refute the long list of malicious absurdities that he reports about the Russian operation in Syria Western and not only Western press.

ANALYZING THE PRODUCT WITH LOGIC 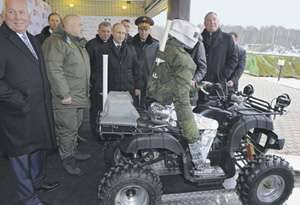 At the test site, President Vladimir Putin and other leaders appreciated the prototypes of combat robots. Reuters Photos
Messages portal DEBKAfile also quite easily refuted. Including his fiction about the strategic partnership of Russia and Hezbollah and our supply of weapons to this organization. To do this, we need to voice one unchanged rule that our arms suppliers are guided by: never does our country sell any military equipment and weapons to any non-governmental and government militarized organizations. Only to the government of a country and only with the guarantees set forth in the contract that this weapon will not be sold or transferred to any third subject. It is clear that the authors of the site DEBKAfile may have their own scores with Hezbollah, but why should Russia be drawn in here ?! We have to object to those who, voluntarily or unwittingly, are mistaken: the official Russian supplies for Hezbollah are, to put it mildly, a fake, if not malicious misinformation.

The absurd is the message of the use of the Russian military robots by the Syrian army. First, they still do not even stand in service with the Russian army itself. Secondly, why should our country test them in Syria and precisely in the composition of the Syrian government armed formations? Do we not have enough of our polygons for this? In addition, those who studied it and who can do it, that is, Russian specialists, should manage domestic robotic devices. And they, as you know, do not participate in the ground operations of the Syrian troops. It’s even more ridiculous to read that the Platform-M and Argo robots are driving the newest Andromeda-D automated system through drones. She just entered the Airborne Forces, actively and, as they say, successfully mastered there. It would be very strange to make a decision and take it to Syria, to local troops, where there is a huge risk of suddenly finding a system in the hands of others. I think that our generals have everything in order with common sense.

It is impossible not to notice that publications on the Internet about the achievements of Russian designers and the military in creating robotic systems of the battlefield and automatic control systems for military equipment and troops appeared in electronic networks on the eve of the visit of Russian President Vladimir Putin to the Moscow Region exact Klimovsk mechanical engineering. There the head of state was shown the most promising developments of the national defense industry, including the Advanced Research Fund. That organization, which is precisely engaged in including combat robots, UAVs, reconnaissance and control systems, electronic warfare and other combat support complexes. And the institute itself is the creation and testing of all complexes of domestic small arms. Not only a variety of assault rifles, machine guns, pistols, grenade launchers - all firing weapons with a caliber of up to 45 mm, including special and silent ones. A serious discussion took place on the further development of these weapons and systems in order to reliably ensure the security of our country and its allies.

So for advertising Russian robots and Russian control systems, which, through drones, command Syrian troops on the battlefield from Frunze Embankment, from the National Center for Defense Management of the state, special thanks to the network trolls. It is a pity that this advertisement, to put it mildly, is unreliable. First of all, in essence, we do not lead the Syrian army, it has its own commanders. And the fact that Russia has the technical and technological capabilities to see in Moscow what is happening in Syria is already an open secret. Domestic generals regularly and openly, without hiding anything, show on the screens of the National Center, and also through the central television channels, videos from their UAVs, reconnaissance aircraft and satellites, which constantly monitor the military operation of the Russian VKS to destroy the Islamic State’s terrorists the earth.

This operation does not need false and inaccurate advertising misinformation, even if it is created with good goals that are not completely clear to normal people. A noble cause — namely, our military grouping in Syria is engaged in this — we need honesty and truth. They have our army.

Ctrl Enter
Noticed oshЫbku Highlight text and press. Ctrl + Enter
We are
About revolution in military scienceThe wrong side of the operation "Argo". What is behind the scenes Oscar-winning film
77 comments
Information
Dear reader, to leave comments on the publication, you must to register.