Achieving military technical superiority or at least parity is a key condition for ensuring national security. Among the military technologies of the near future, a special role is played by the systems of automatic detection, recognition and autonomous targeting of weapons to target targets according to their image and other signatures with an accuracy that provides a direct hit.

The solution of this problem will bring to a qualitatively new level the shock capabilities of the Armed Forces in a non-nuclear conflict with any adversary. A material base will appear for conducting transient operations with the application of selective, so-called surgical strokes with minimal side damage. Without solving this problem, creating a truly effective strategic missile defense system is impossible.

“For Russia, with its defensive military doctrine, vast spaces, insufficiently developed infrastructure, it is advisable to build the Armed Forces as an organization with“ distributed intelligence ””
One of the priorities is hyperspectral spectrometry. The development of systems based on it is considered as a qualitatively new stage in the development of reconnaissance and observation means combining the capabilities of solving three main tasks: detection, classification, maintenance of contact. This is also true for homing systems. weapons.

Complexes of reconnaissance and observation using the method of hyperspectral spectrometry have important advantages. First, it is multi-range. It allows you to provide increased permeability in any environment, a high probability of contact, reliable classification of the object up to a reliable determination of its location in space and direction of movement, as well as reliable selection of interference of natural and artificial origin. Secondly, the mathematical methods of signal processing. This gives the complexes real properties of intelligent weapons, primarily due to automated adaptation to various objects, their spatial location, systems and means of concealment, as well as to various variants of meteorological conditions. However, the use of the optical range of electromagnetic radiation, even if very wide - from infrared to ultraviolet, still creates dependence on the weather.

Hyper-spectral spectrometry for reconnaissance, target designation and guidance systems opens up fundamentally new possibilities. First of all, it is a direct (not due to movement observation) determination of the spatial orientation of the target, which can significantly reduce the time for target designation and monitor the movement elements in real time. A weapon (projectile, rocket) has the ability to reliably classify a target, independently (automatically) select the most advantageous attack angle and the most vulnerable point of destruction. This allows, on the one hand, to significantly increase the stability of the percussion weapons themselves from the effects of self-defense systems, and on the other, to reduce the number of hits required to disable or destroy an object. Finally, there is the possibility of creating unified means of reconnaissance and GOS for observing and hitting various targets, when adaptation to the solution of a task can be accomplished by changing the mathematical apparatus of signal processing.

In the United States, the use of hyperspectral spectrometry is considered one of the most promising ways to improve the timeliness and reliability of intelligence.

In the interests of the Pentagon, technologies are being developed for air and space platforms in two main directions. The first is the reconnaissance of the environment for the conduct of hostilities, land, sea and aerospace. The second is target detection, description of their parameters and identification.

The US Air Force already has a satellite Mighty Sat II with the equipment of hyperspectral analysis FTHSI. US Navy - HYDICE spacecraft. The hyperspectral instrument CYRIS is also available on board the PROBA satellite of the European Space Agency. Work is underway to build tactical-level reconnaissance complexes using a UAV based on the same method. Space systems for operational and strategic reconnaissance should allow for high probability of detecting and classifying targets when they are disguised, partially or completely hidden, and also in conditions of intentional interference. All this in real time.

In the United States, judging by the materials of the open press, the main focus is on the development of intelligence systems, rather than homing weapons for a significant increase in the possibilities of global observation at any time of the day, in adverse weather conditions in order to open stationary and mobile camouflaged objects and track them for later destruction. What is the most dangerous result for us? The loss of stealth ground-based mobile strategic missile systems, since with the introduction of hyperspectral spectrometry, the United States has the opportunity to carry out their reliable reconnaissance in real time at any point in Russia. And no disguise with disguise will not help here.

At the same time, the priority of intelligence systems, rather than weapons control and the homing of ammunition, increases the dependence of troops on external information. The degree of connectedness of US groups increases, thereby placing higher demands on both technology and personnel.

In Russia, as early as in the 90, an initiative group of scientists developed and tested effective national observation systems based on hyperspectral spectrometry in the national economy. In contrast to the American approaches, our know-how allowed us to introduce the method directly into combat systems, giving them the properties of highly intelligent weapons by solving a key task - automatic recognition of the target image. And it would be possible to create conditions for the implementation of a qualitatively different concept for the development of armaments of the RF Armed Forces. This refers to the minimization of dependence on external information, the “autonomization” of weapons and military equipment. That is, the construction of the Armed Forces of the Russian Federation as an organization with “distributed intelligence” as opposed to the US Armed Forces, which are developing in the direction of its “centralization”. 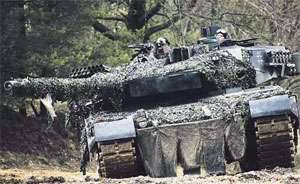 The main advantages of systems with "distributed intelligence", that is, with a high degree of "autonomization" of elements, are a significant reduction in management requirements and high functional resistance to damage. The first is due to the fact that the amount of information (intelligence and command) necessary for the actions of individual combat units with their own advanced means of observation is significantly reduced. Accordingly, the cost of the control system is sharply reduced. The increase in functional stability is predetermined by the fact that, with a high degree of autonomy of the elements, the disruption of the backbone links does not deprive others of the ability to perform their functions.

The main disadvantage of organizational and technical systems with “distributed intelligence” arises from their advantage. They are more inert.

Obviously, for Russia with its defensive military doctrine, vast spaces, insufficiently developed infrastructure, especially communication systems, it is more expedient to develop the Armed Forces in the direction of “autonomization” of troops (forces). Therefore, an orientation towards priority intellectualization of weapons should be recognized as more appropriate to our conditions.

The second most important advantage of this approach is that the shock systems can be supplemented on a single conceptual basis with appropriate defensive ones that can neutralize their counterparts in foreign armies. Thus, we receive not separate samples, but a complex. It implements both shock and protective functions.

For armor not to hide

The level of domestic developments based on hyperspectral spectrometry makes it possible to count on the creation in the near future of qualitatively new weapon systems. This, in particular, a multi-purpose anti-tank complex and active protection of armored vehicles. These are operational-tactical and tactical missiles with intelligent high-precision GOS and the corresponding systems of active protection of ground objects. This is an intelligent high-precision air defense missile system combined with a helicopter and aircraft protection system.

The main advantage of the multipurpose anti-tank complex using the GOS based on hyperspectral spectrometry will be the possibility of reliable classification and determination of the spatial position of the armored vehicle. It is worth repeating, allows you to autonomously select the most vulnerable area of ​​destruction. Identification of the target in its three-dimensional image, combined with giving this weapon the ability to quickly change its “portrait” makes such an ATGM suitable for use in other objects as well. In fact, we are talking about a portable universal system of precision weapons of infantry.

The method of hyperspectral spectrometry allows the creation of objects with equal strength in all possible directions of the projectile approach tanks and BBM. At the same time, increased protection will not be associated with an increase in the thickness of the armor (and hence weight), but with a more reliable and timely recognition of the attacking means of destruction, which does not require any significant increase in the overall dimensions of the equipment. In addition, this method provides exceptional noise immunity, ensuring the defeat of hidden objects.

The introduction of intelligent anti-tank systems and protection systems will lead to significant shifts in the ideology of the development of IWT Ground Forces. The confrontation "projectile - armor" is changed to "shock system - defense system." Thus, to a certain extent, the importance of classic counter-armor is leveled. She will be unable to provide equal protection of the tank. Intellectual ammunition will independently find the most vulnerable point.

Of no less interest are the methods of hyperspectral spectrometry in terms of equipping a tactical missile with operational and tactical missiles. They receive a qualitatively new opportunity - supplementary exploration of the state of the target and automatic selection of the most vulnerable element. This is especially important when defeating objects with a spatial structure, which have a defense system that does not reliably reveal the location of individual elements and their state. These include, for example, naval bases, airfields, command posts of the operational level and above.

This new quality, combined with a significant increase in noise immunity of the GOS and accuracy of hitting, will significantly reduce the required ammunition consumption to destroy distributed functionally related targets, as well as increase the likelihood of the destruction of targeted highly protected objects, especially in the presence of interference.

The use of intelligent guidance based on the methods of hyperspectral spectrometry provides a highly efficient autonomous system of object protection. The probability of damage to the head parts of OTP and TR can be significantly increased due to the qualitative growth of their detection capabilities and correct classification under interference conditions with a significant increase in pointing accuracy.

The application of the methods of hyperspectral spectrometry in the GOS of MANPADS and air defense missile systems, air-to-air missiles operating in the optical range is relevant. This will allow, first of all, to provide extremely high noise immunity and will enable all-aerial destruction of air targets, regardless of their position relative to external sources of radiation. Existing interfering systems in the optical and infrared range are ineffective against such GOS. And the creation of new, able to effectively counter them, will take a long time.

The ability to reliably detect an attacking missile and its spatial orientation using the methods of hyperspectral spectrometry brings us to the need to develop an all-perspective and omnidirectional protection of aircraft. That is, it becomes possible to create a complete individual air defense system for them.

The existing groundwork allows us to develop hyperspectral technologies and create highly efficient means of reconnaissance and observation based on them. There are all prerequisites for the deployment of such work. The introduction of such means into the weapons system promises a significant increase in combat capabilities.

Ctrl Enter
Noticed oshЫbku Highlight text and press. Ctrl + Enter
We are
Prepare for the battles to come, not pastMilitary reform as an integral part of the security concept of the Russian Federation: Systematic dynamic assessment
46 comments
Information
Dear reader, to leave comments on the publication, you must to register.