The National Interest: deadly invisible submarines that can drown the US Navy

February 1 2016
40
The development of the naval forces of leading countries is one of the main topics for discussion among specialists and the public. In recent years, such discussions have received additional incentive in the form of the construction of new ships and submarines for the Russian Navy. Broadcast the fleet new ships and submarines becomes the reason for the pride of the Russians, as well as the cause of concern for foreign military and experts. Among other things, all this leads to the appearance of relevant publications in the press.


The latest example of such articles is “This Could 'Sink' the US Navy: Lethal Stealth Submarines” (“They can drown the US Navy: deadly invisible submarines”), published by The National Interest 27 in January. The author of this article is Harry J. Kazianis, an expert at the Center for National Interests who deals with security issues. In his publication, the author reviewed the current situation in the field of submarine fleets of leading countries and made some conclusions.

At the beginning of the article, an American expert, not without pride, mentions that now in the World Ocean there is no such force that can compete with the United States Navy. Washington has a powerful fleet of strategic and multi-purpose submarines, aircraft carriers and other surface ships, whose teams are composed of professionals with good training. In comparison with the US naval forces, on the paper, all the fleets of other countries, such as Russia, China or Iran, lose. The author recalls that история clearly demonstrates: to enter the war with the United States is a real suicide. 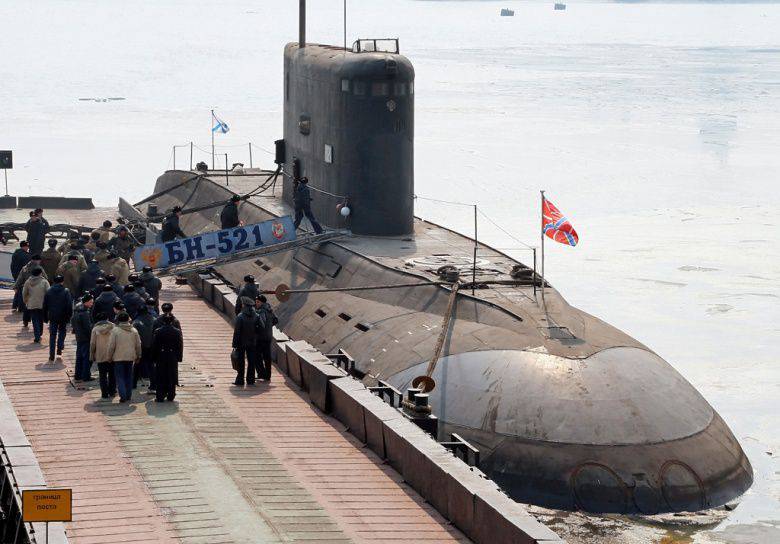 Nevertheless, according to G.J. Kazianis, official Washington will have to adjust its strategy. The development of modern ultra-quiet diesel-electric submarines has led to the fact that a country with modern submarines of this class receives a weighty argument in a hypothetical conflict.

The author acknowledges that the threat from diesel-electric submarines with enhanced stealth characteristics is not new. A similar situation began to emerge several decades ago, when various countries began to build or purchase such submarines. However, the current situation is further complicated by the development of technology. Submarines of the latest generation receive advanced anti-ship missiles, as well as equipped with the latest air independent power plants. The latter significantly increase the range of underwater travel, which seriously complicates the search and destruction of enemy submarines. All this should be considered when developing new tactics and strategies.

The events of recent years clearly show the challenge that the naval forces of the United States and other developed countries met. In this regard, it is necessary to take certain measures. G.J. Kazianis recalls that in the year 2005, a program of cooperation between the United States and Sweden began, under which the newest Swedish submarine HMS Gotland was at the US base in California for a year and participated in various events. During this time, the sailors of the two countries studied the features of the operation of such equipment, as well as identified its combat capabilities. One of the results of these studies was the conclusions about the high potential of diesel-electric submarines, which are much cheaper than nuclear submarines, but have a great combat potential.

As evidence of this, the author of The National Interest cites a rather old publication on the joint work of the American and Swedish fleets. In that article, it was assumed that the US Navy did not expect such high characteristics as the Swedish submarine showed. HMS Gotland conditionally attacked various ships and submarines of the American fleet. The boat secretly approached targets and attacked destroyers, submarines, cruisers, etc. In addition, even a breakthrough was made for the last line of the anti-submarine defense of the carrier-based strike group.

According to some data, during these exercises, combined with tests, an attack was carried out on a carrier strike group led by the newest aircraft carrier USS Ronald Reagan (CVN-76). A Swedish submarine approached the ships at attack range and made several conditional attacks. The ships of the United States Navy failed to find the "aggressor." It was noted that the HMS Gotland submarine is so quiet that it literally does not exist for detection systems.

Fortunately for the American fleet, the author notes, all of these were fully controlled experiments, which allowed us to understand the potential threat posed by promising submarines. However, not all meetings with such submarines ended well. So, in the 2006, the Chinese submarine of the 039 project (Song-class according to NATO classification) "sat on the tail" of the US aircraft carrier USS Kitty Hawk (CV-63). For some time, the Chinese diesel-electric submarines, created, according to some estimates, with the use of foreign technology, pursued the American aircraft carrier. It was only the crew of the patrol aircraft that discovered the pursuit when the carrier group and the submarine entered the less deep-water area, and the latter was forced to reduce the depth of the dive.

Russia is currently developing new diesel-electric submarine projects that will replace existing submarines in the future. New boats, according to G.J. Casianis will be even more dangerous than existing ones. In support of this, a quote from relatively recent News.

More recently, the general director of the shipyard Admiralty Shipyards (St. Petersburg), Alexander Buzakov, said that in terms of secrecy, the promising submarines of the 677 project (Lada-class) will surpass the existing submarines. According to the head of the company, in terms of secrecy, new submarines will be better than the existing submarines of the 636 Varshavyanka (Kilo-class) project, which are already called “black holes” for their ability to move without risk of detection.

It was reported that the increase in stealth characteristics on new boats will be achieved by several main methods, including using a new coating that reduces the spread of sounds and the reflection of vibrations, as well as promising hydroacoustic systems. According to A. Buzakov, during the development of a new project, it was possible to collect a lot of valuable information that was actively used in the works. In addition, this information allowed to a certain extent to improve the existing submarines.

G.J. Kazianis recalls that Lada-class submarines are intended to protect the specified areas from ships and enemy submarines. In addition, they can perform reconnaissance tasks, conduct observations, and even ensure the work of combat swimmers. According to reports, the new air-independent power plant will allow the submarine to remain submerged until 25 days. The cruise missiles should become the basis of the 677 submarine armament complex, which will make these submarines the world's first non-nuclear carriers of such weapons.

Having considered the situation, the author of The National Interest asks the expected and logical question: how should the United States naval forces respond to the new challenge in the form of non-nuclear high performance submarines? You can start preparing for confronting such a threat with the development of anti-submarine systems. First of all, it is necessary to develop detection systems, which, however, can be used against American submarines. As an alternative solution, the author proposes to recall the proposal concerning the construction of its own ultra-quiet diesel-electric submarines. He concludes his article with a relevant question: maybe the United States should develop its own high-performance diesel-electric submarines? Asking this question, the author refers to an article by James Holmes of September 2014, in which it was proposed to consider returning to the construction of non-nuclear submarines.

Harry J. Kazianis raised an important topic, the relevance of which is growing every year. Many countries of the world are currently developing their submarine fleet, building or purchasing diesel-electric or non-nuclear submarines. Yielding to nuclear submarines in a number of parameters, diesel-electric is cheaper in construction and operation, but at the same time it is fully capable of solving combat missions. In addition, the emergence of new technologies makes it possible to reduce the lag from nuclear submarines in terms of the duration of scuba diving or, at a minimum, bring this parameter to acceptable values.

As an example of the active development of a non-nuclear submarine fleet, one can cite the Russian program for the construction of diesel-electric submarines of the 636.3 Varshavyanka project. Currently, an order is underway to build six such boats for the Black Sea Fleet, four of which have already been transferred to the customer. Not so long ago, it was announced that in the foreseeable future six more Varshavyanki would join the combat fleet of the Pacific Fleet. Thus, the submarine forces of the Russian Navy will grow not only due to nuclear submarines, but also thanks to diesel-electric ones.

The stealth diesel-electric submarines of the latest generations, achieved through the use of new technologies, materials and components, are noted. Due to this, as it was in 2005 and 2006, the submarine gets the opportunity to secretly approach the enemy's order at an attack distance and strike the first blow before they notice it and start attacking. This possibility significantly increases the impact potential of the submarine fleet.

The growth of the combat potential of non-nuclear submarines also contributes to the emergence of new weapons. In early December last year, the whole world saw what weapons the new Russian submarines possessed. The Rostov-on-Don submarine, located in the Mediterranean, has launched Caliber cruise missiles at targets in Syria. Thus, to perform some combat missions, the new Russian diesel-electric submarines may not even approach the target, which requires an appropriate response from a potential adversary.

In the foreseeable future, the Russian industry should present the first projects of domestic non-nuclear submarines with an air-independent power plant. As the US-Swedish exercise 2005 of the year showed, the use of such equipment greatly enhances the combat capabilities of the submarine, and in some cases almost excludes the possibility of its detection by the enemy. In combination with modern percussion systems, such a submarine will be the most serious tool for solving military and military-political tasks.

The author of The National Interest offers two ways to counter the development of a non-nuclear submarine fleet of third countries. The first involves the improvement of anti-submarine systems, which will allow detecting and finding even subtle and super-quiet promising submarines. The second response to the threat is symmetrical: it is proposed to return to the construction of non-nuclear submarines, similar to foreign models. Which way the Pentagon will choose - time will tell. Judging by recent reports, the development of antisubmarine systems looks much more realistic, but not the construction of its own diesel-electric submarines.


The article “This Could 'Sink' the US Navy: Lethal Stealth Submarines”:
http://nationalinterest.org/blog/the-buzz/could-sink-the-us-navy-lethal-stealth-submarines-15034

Ctrl Enter
Noticed oshЫbku Highlight text and press. Ctrl + Enter
We are
Update the Russian Navy. In the gland. Part of 1The state and prospects of development of the naval forces of Ukraine (2013)
40 comments
Information
Dear reader, to leave comments on the publication, you must to register.