January 27 2016
60
The beginning of the new year is always associated with new deliveries of weapons, equipment, equipment and special equipment. As promised earlier, the army began to receive new systems, including special protection suits, OVR-3Sh. Plans for the supply of these products were announced in December last year, and now the troops received the first production models. With the help of new suits, fighters of a number of units of the armed forces will be able to more effectively accomplish combat missions with less risk to health and life.


About the future supply of suits OVR-3Sh and other similar equipment became known in early December last year. On December 2, the head of the engineering troops of the armed forces, Yuri Stavitsky, said that next year (2016) two new protective suits would begin to be purchased. This equipment is intended for engineering and engineering and assault engineering units. New costumes differ from each other, and their composition depends on the intended tasks. When developing such equipment, an attempt was made to introduce a mass of new ideas and solutions aimed at increasing the level of protection of fighters. 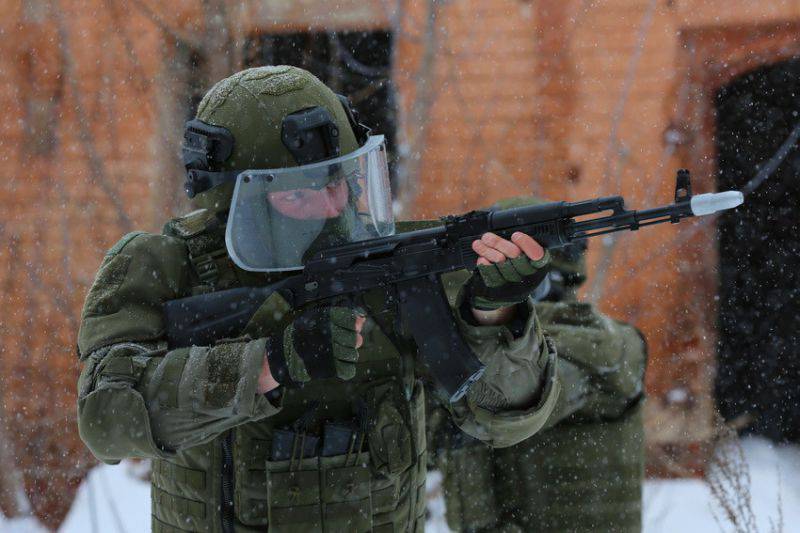 The protective suit OVR-3Sh was developed by Fort-Technologies, which already has extensive experience in creating modern personal protective equipment and armored vehicles. The new project used both proven and proven solutions and new ideas that were not previously used in domestic developments of a similar nature. 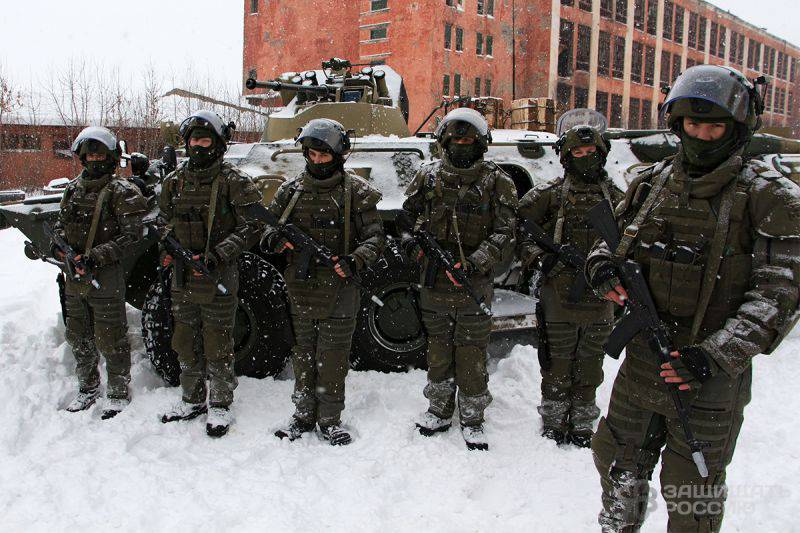 The main element of the OVR-3Sh kit is a Caspian protective suit. Its main elements are the jacket and pants, on which are mounted the elements of protection and means for transporting ammunition, etc. freight. A characteristic feature of the costume is the architecture of protective equipment. It consists of rigid metal, plastic and ceramic plates, as well as flexible elements made of aramid fabric. The correct combination of rigid and flexible elements allowed to ensure the highest possible level of protection while maintaining the convenience of operation and mobility of a fighter.

The torso of a fighter dressed in an OVR-3Sh suit is protected by a set of rigid and flexible elements. In front and behind in special pockets of a vest stacked hard blocks, which are a combination of metal, plastic and ceramic armor. For greater ease of use, the front part of the protection is divided into two panels: the top, carried in the vest, and the bottom, secured in a separate cover and protecting the groin area. During the tests, the thoracic and dorsal blocks confirmed the possibility of protection against the bullets of a SVD rifle (cartridge 7,62x54 mm R). When firing from a distance of several meters, the armor blocks were not completely punched: there were holes on the outer surface, bulges on the inside, but there were no through holes. 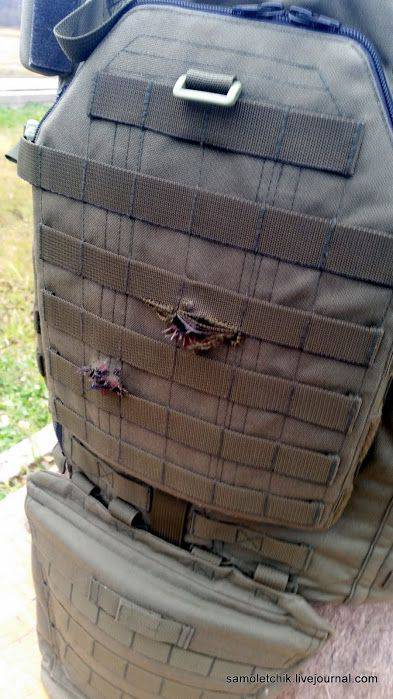 On the side, the body of the fighter is protected by blocks of aramid fabric, capable of withstanding shelling from an 9-mm pistol. Similar linings are used to protect other areas of the body. With their help, it is proposed to protect the joints of the hands and feet. Other parts of the limbs, in turn, are covered with rigid protective elements.

The most important feature of the Caspian costume and the IOB-3Sh kit is the use of a set of sensors that facilitate combat operations. Each fighter using such a suit receives special equipment that monitors their health. With the help of wireless communications, the unit commander can receive information about the condition of the fighter and promptly find out which of the soldiers was injured or killed. 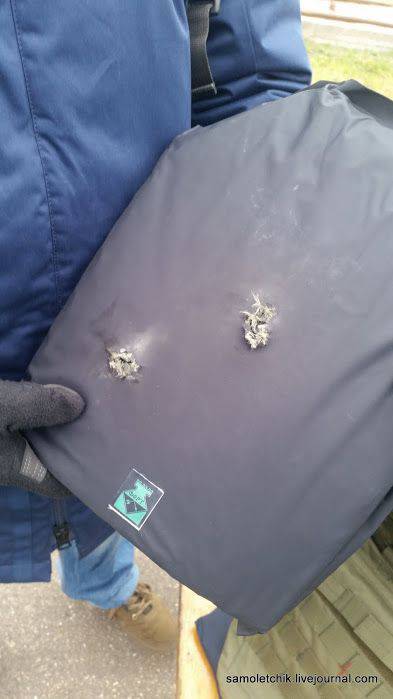 Holes from rifle bullets on the armored block. Photo Samoletchik.livejournal.com

For added convenience, most of the outer surfaces of the protective suit are covered with MOLLE lines, on which the fighter can secure pouches and other equipment. Their composition and installation configuration are determined by the fighter in accordance with personal preferences.

To protect the warrior’s head, a helmet of the “Warrior Shako-RSP” helmet, which can withstand the penetration of fragments and bullets of some types of rifle fire, is included in the OVR-3Sh kit weapons. The helmet is equipped with headphones with active noise cancellation, anti-splinter transparent shield, laryngophone and lantern. If necessary, instead of the shield can be used glasses with the appropriate characteristics. In the case of the use of additional equipment on the frontal part of the helmet provides for unified mounting. 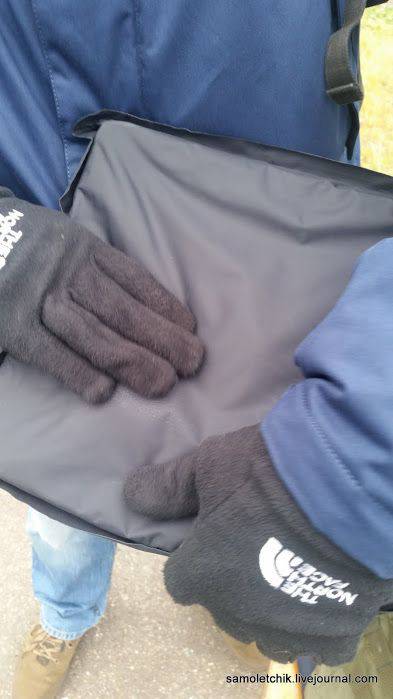 The back of the armor unit - no holes, no penetration. Photo Samoletchik.livejournal.com

All elements of a protective suit for transportation are folded and packed in two bags. Dimensions of bags with a suit allow one fighter to carry all their own means of protection without any problems.

The composition of the armament and the additional equipment of the fighters of the assault and brigade engineering unit using the OVR-3Sh kit depends on the task and other factors. Soldiers must use regular small arms, and may also use some additional funds that come with a protective suit. With the help of such equipment it is proposed to solve a wide range of various tasks. 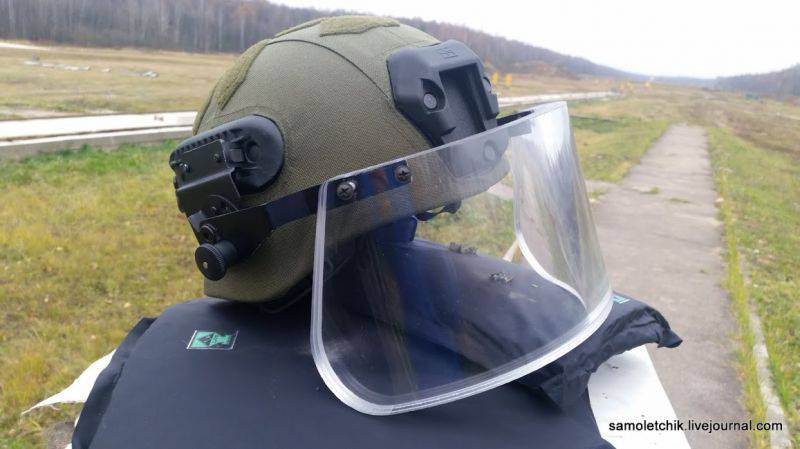 Together with other equipment, a fighter can use a sapper machete with a scabbard, combined scissors, an assault shield and other wearable equipment. In addition, the kit includes an assault ladder, equipment for knocking out doors, various tools, including for carrying out explosions, etc. The composition of the optional equipment of the OVR-3Sh kit is determined in accordance with the terms of the tasks to be accomplished, which are characteristic of the assault and firing units.

According to reports, the OVR-3Sh kit has already entered the series and has recently been delivered to the troops. With the help of this equipment, the fighters of the engineering troops are able to fully perform combat missions in difficult conditions, including under enemy fire. Available personal protective equipment can save the soldier from bullets and splinters, which will allow him to continue working or, in the worst case, to get rid of only minor injuries. In addition, the kit includes additional tools and tools necessary to perform certain work. 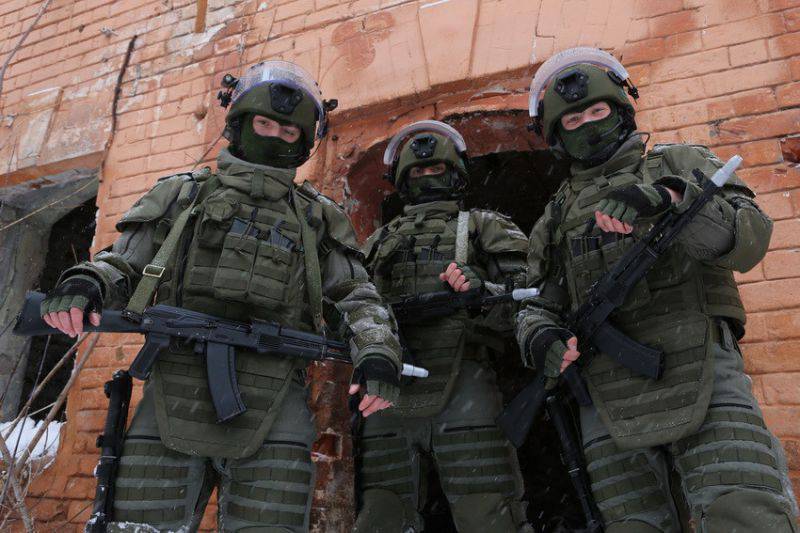 In parallel with the set of OVR-3Sh for engineering and assault divisions, the production of a similar system for engineering-sappers began. Such a kit has a different composition and other protection characteristics associated with a different list of tasks. As well as OVR-3Sh, sets for sapper divisions are now produced serially and delivered to the troops. The creation of two new protection complexes allowed to increase the security of the fighters and to facilitate the implementation of the tasks assigned. 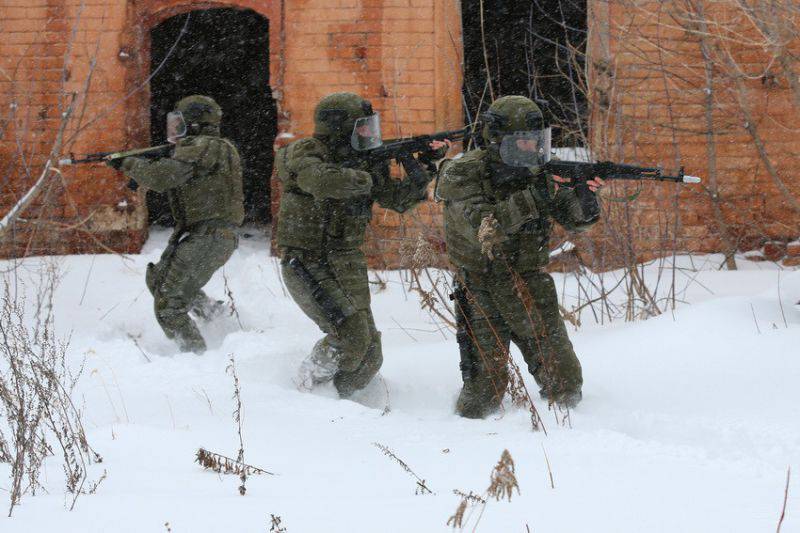 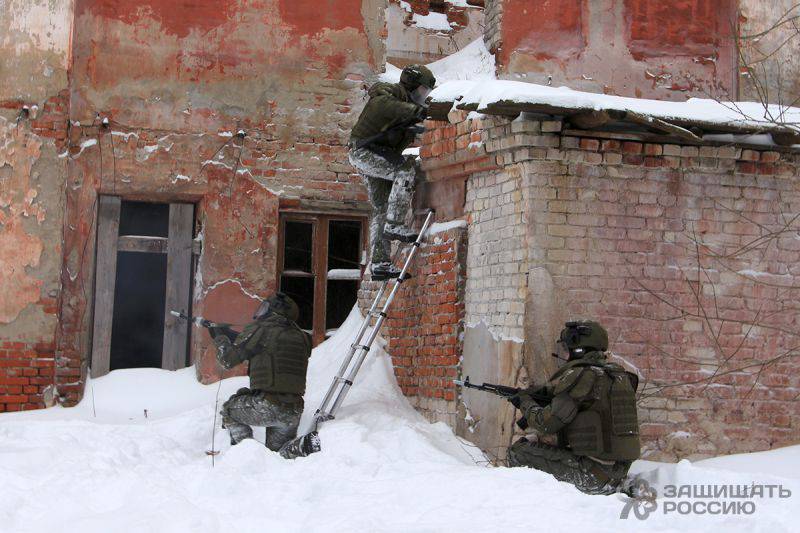 The use of assault ladder from the new set. Photo Defendingrussia.ru