Misha money will go “candidates” for the parliamentary elections in Russia

January 26 2016
71
Year 2016 is, as is known, the year of parliamentary elections in Russia. And, despite the fact that the citizens of Russia will elect the deputies of the State Duma to be 18 of September, the de facto election campaign has actually started. And in the election race, the (former!) Exile, who is also the former head of Yukos, who is also the main suspect in the case of the murder of Nefteyugansk Mayor Vladimir Petukhov, Mikhail Khodorkovsky, joined the election race. Immediately it should be noted that Mr. Khodorkovsky was not involved in the election race as one of the candidates - his participation is indirect. What is it? 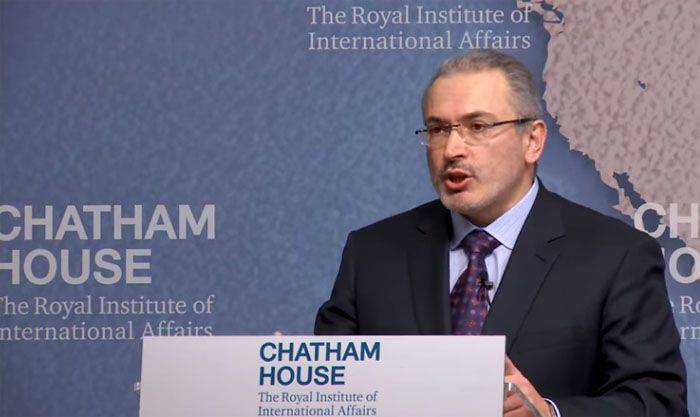 The other day edition Kommersant published a material stating that Khodorkovsky actually made a decision on financial support for the so-called "open candidates." And the support is very, very peculiar.

On the portal "Open Russia", demonstrating its, so to speak, swamp opposition, and functioning not without the efforts of all the same Mikhail Khodorkovsky, a separate section appeared, called the "Open Elections". The project manager appointed such a person as Timur Valeev, who made a new statement about the MBH initiative (Mikhail Borisovich Khodorkovsky):

We are looking not just for candidates, but for formed teams. Teams of like-minded people rallying around young leaders. Teams with stories successfully defending their rights, with experience in solving specific urban and regional problems. We will help such teams and their leaders.

Support on behalf of the ex-perpetrator will be implemented in relation to the so-called "single-mandate". If you believe the aforementioned Mr. Valeyev, then the “Open Russia” of Mr. Khodorkovsky intends to support two dozen “free candidates”.

Now about where the MBH is going, so to speak, to extract these same "free candidates." It turns out that applicants who a priori satisfy the requirements of Mr. Khodorkovsky must declare themselves. It is this approach that forces the ladies and gentlemen who are already funded by the MBH to launch a campaign in RuNet, which can be described as “Hello! We are looking for talents! ”What“ talents ”satisfy the demands of Mr. Khodorkovsky is clear to our readers without many letter explanations: preparing the ground for the“ triumphant ”return of the MBH itself to Russia with purely“ messianic ”goals, moreover the main state post, and the simultaneous surrender of all national interests that the Russian Federation alone has. After all, it’s not just that, for the "red" word, Khodorkovsky, literally, in all corners, states that by the year 2018, Russia "needs a revolution." Apparently, he mentally perceives himself and that knight on a white horse, of course, a horse who in Russia will induce a “democratic” rustle a'lya 90.

According to MBH ideas, “Open Elections” is an “unprecedented experience” that will do “without paid publications in the media,” without “fake extras at rallies” and even without “dirty technologies.” In general, everything is crystal clear, white and fluffy in some places ... Yeah.

Moreover, the mere fact that the project is going to be supported by a citizen of the Russian Federation (and as far as we know, MBH did not refuse Russian citizenship), suspected of a serious crime, wanted and located outside the Russian Federation, the projectors from the “Open Elections”, apparently, dirty technology pre-election cycle is not considered.

Whom do the representatives of the MBH funded platform call for candidates? From the statement on the website:

If you clearly understand what prevents your city and region from developing.
If you are ready to submit regional problems to the federal level and propose bills that will make life on the ground better.
If you are able to defend the interests of your small homeland and always be in touch with your voters.
That we have something to talk about. We want to listen to you, study your program and discuss our cooperation.
The Open Elections project team will provide friendly candidates with legal, intellectual, informational support during the election race. We will check that the vote is fair and help prevent any fraud. We will give honest candidates the opportunity to participate in fair, open elections.

The article "Kommersant" adds that it will not do without the financial support of candidates. And for the candidates themselves, a mini-questionnaire has been created, with the help of which they can tell about themselves to those who are going to hold them in the lower house of parliament. They are, that is, persons capable of enabling the remote advancement through parliament of a certain kind of ideas. - Ideas that a strong and truly independent Russia is an indispensable evil that needs to be burned with a hot iron of Western democratization ...

If you believe the representatives of the "Open Russia", then as a "candidate candidates" already selected two individuals. These are the heads of the Petersburg and Novosibirsk branches of PARNAS Andrei Pivovarov and Yegor Savin. In PARNAS itself (in particular, the notorious Ilya Yashin) confirm (through the press) that Khodorkovsky is considered to be his ally. Well, I wish ... After all, the same hope that the MBH will definitely be able to “breathe” life into this stillborn opposition material by sending gray-green candy wrappers, which the ex-janitor so happened, and today abound.

By the way, it is necessary to mention that the so-called “Open debates” became the forerunners of the “Open Elections”, financed already by whom. This is such a narrow small party of people who are called to convey to the Russians the point of view of the "main friends of Russia." So, in October last year, in St. Petersburg, one of the “Open Debates” tours took place, in which such people as “apple” by Nikolai Rybakov and ex-National Ball (he is a journalist) Dmitry Zhvania took part.

From the press release of these “debates”, published by “Open Russia” on Facebook, and related to the subject of the VKC RF operation in Syria (the style is preserved):

Both agreed that the country has a huge number of problems for which it would be better to put the money that goes to the military campaign in Syria. They also agreed that participation in the international coalition in the fight against ISIL would be much more effective for solving the problem of international terrorism and not increasing confrontation with the West.

As you can see, the money allocated to the “debaters” has been properly worked out ... Apparently, the next debaters-candidates will have to (according to the precepts of the great MBH) raise the issue of Russia's refusal of nuclear weaponsand also the immediate introduction of a regime of externally controlled democracy in the Russian Federation according to the Ukrainian (undoubtedly, outstanding in every sense) scenario ...

Ctrl Enter
Noticed oshЫbku Highlight text and press. Ctrl + Enter
We are
Results of the week. "And you do not confuse your personal wool with the state!"Khodorkovsky on an imaginary armored car ...
71 comment
Information
Dear reader, to leave comments on the publication, you must to register.