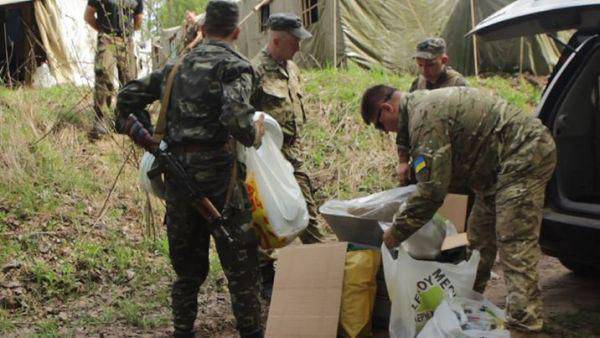 I remember that during the time of the armed conflict of the Armed Forces of Ukraine with the Donbass militia, the Ministry of Defense of Ukraine was not able to provide its fighters with even the most necessary. The soldiers who went to the front (voluntarily or by mobilization) did not even have basic protective equipment and clothing, not to mention modern weapons. The maximum ammunition that the state could provide for the military was limited to old Soviet stocks from warehouses. About modern first-aid kits and berets there was not even a word.

It was then that the volunteer movement appeared, people who were engaged in meeting army needs, believed in the truthfulness of the information provided to them by the Ukrainian media.

While the state was launching a sluggish machine for supplying the army, looking for manufacturers of body armor and helmets, conducting dubious tenders, negotiating with international partners (and some officials were making money out of habit, now in war), the situation was taken up by volunteers. They traveled to the hottest areas of the front and carried everything necessary to the military: from socks and underwear to thermal imagers and armored vehicles.

"Everything was needed, from food to unmanned vehicles. We sent about 120 cars to the front, including a dozen fully equipped reanimobiles, about 300-400 thermal imagers and night sights. Plus medicine: 12,5 thousands of individual first-aid kits. And how many courses we had on the front line in tactical medicine - I will not calculate this for you, ”says Roman Sinitsin, one of the founders of the large-scale volunteer project“ People’s Rear ”.

Today, the battles have subsided, and, according to, again, the Ukrainian mass media, the army no longer needs any help from civilians, since the state fully meets the needs of the Armed Forces of Ukraine and the soldiers have everything they need, and not only ...

But is it really? Of course not! Most likely, the volunteers are simply tired of the endless deception by the military personnel and their command. In addition, today it is not a secret that Ukraine has more than 100 cases of fraud under the guise of a volunteer movement. The attackers raise money in the "charity fund" to help the wounded soldiers, appear fictitious names.

According to police, in almost all regions of Ukraine, fraud cases have been registered by pseudo-volunteers. Fraudsters collect a lot of money into a bank account, ostensibly to help the fighters, but the money never reaches the military.

Plus, the items obtained by volunteers are sold on the Internet. On the sites of free ads you can find hundreds of messages about the sale of trophies from the combat zone. Helmets, sleeves, military belts, caps, body armor, sleeping bags, chevrons, berets - such combat “souvenirs” are very popular in the net. Volunteers complain that, during demobilization, the soldiers do not leave their belongings in the army, but take them with them and sell them.

Such actions by “trophy sellers” annoy volunteers. Despite the fact that for such cases, resourceful “entrepreneurs” face the very real term from 3 to 15 years according to the article 10 of the Criminal Code of Ukraine, abduction, encroachment, extortion of military property by military personnel. Ads on the Internet does not become less, and the perpetrators are not sought and naturally avoid criminal responsibility.

Today, if the situation in the Donbass aggravates, the Ukrainian military will have to remember how to sit in the trenches in the winter in a summer uniform and without body armor. And to feed on what God sent, because the volunteers are already waving goodbye, but, as a rule, God sends a little - birch bark and melt water, that's all that poor people from the Almighty can count on ...

Ctrl Enter
Noticed oshЫbku Highlight text and press. Ctrl + Enter
We are
A couple of words in defense of the first "Minsk"Military reform as an integral part of the security concept of the Russian Federation: Systematic dynamic assessment
63 comments
Information
Dear reader, to leave comments on the publication, you must to register.