January 27 2016
7
No, you did not guess. It will not be about clay pots, in which the army, besieging the castle or the enemy fortress, sent its natural needs, and then this "grace of the womb" was thrown on the heads of the defenders. Yes, in the summer, and especially in the heat, it was terrible weapon. But it will be about the other, although about the dishes. 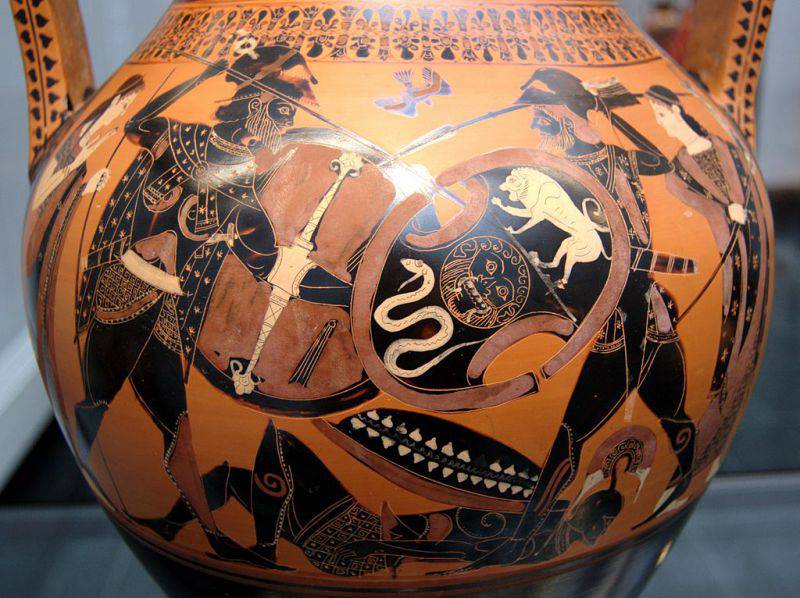 Achilles fights with Memnon. The author of the painting is Andokid, 530 BC Louvre That is exactly what the warriors of that time looked like, since the Greek artist of that time painted only what he saw directly around him.

It will be told about ancient Greek ceramic vases, amphoras and plates, which the ancient Greeks were in fashion to paint. And we were very lucky that they used to paint all kinds of pottery, which they used to store oil, wine and grain, to eat, and even for ritual purposes. 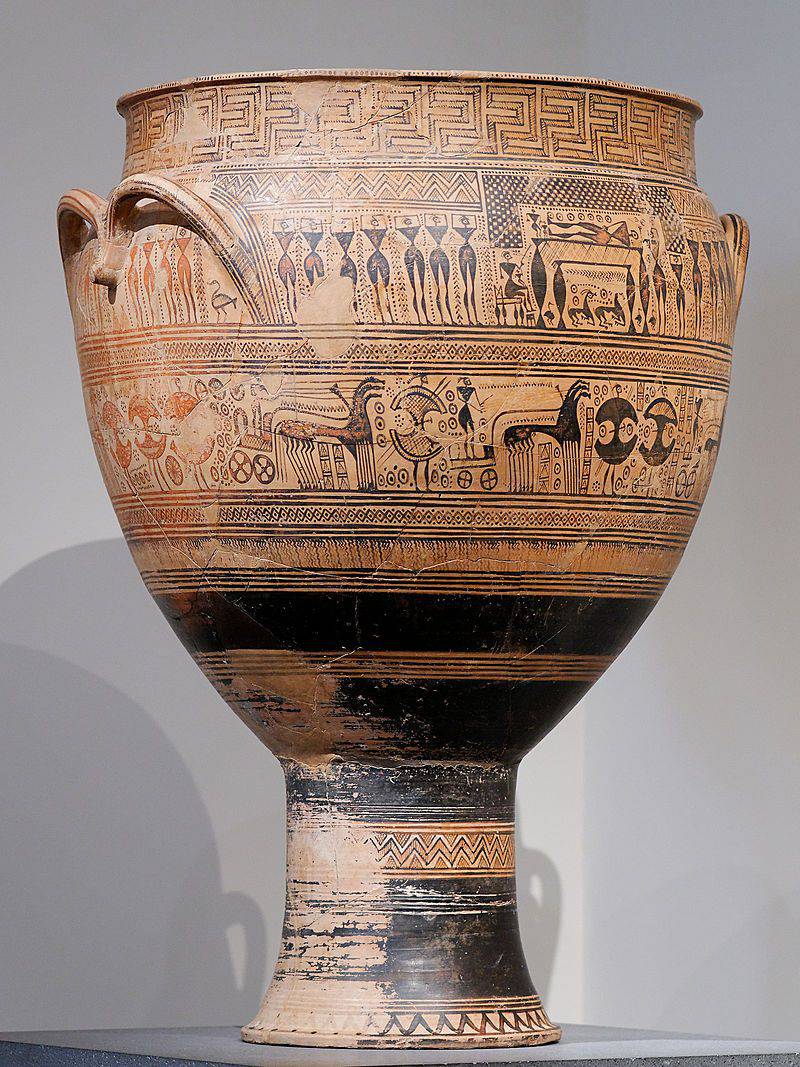 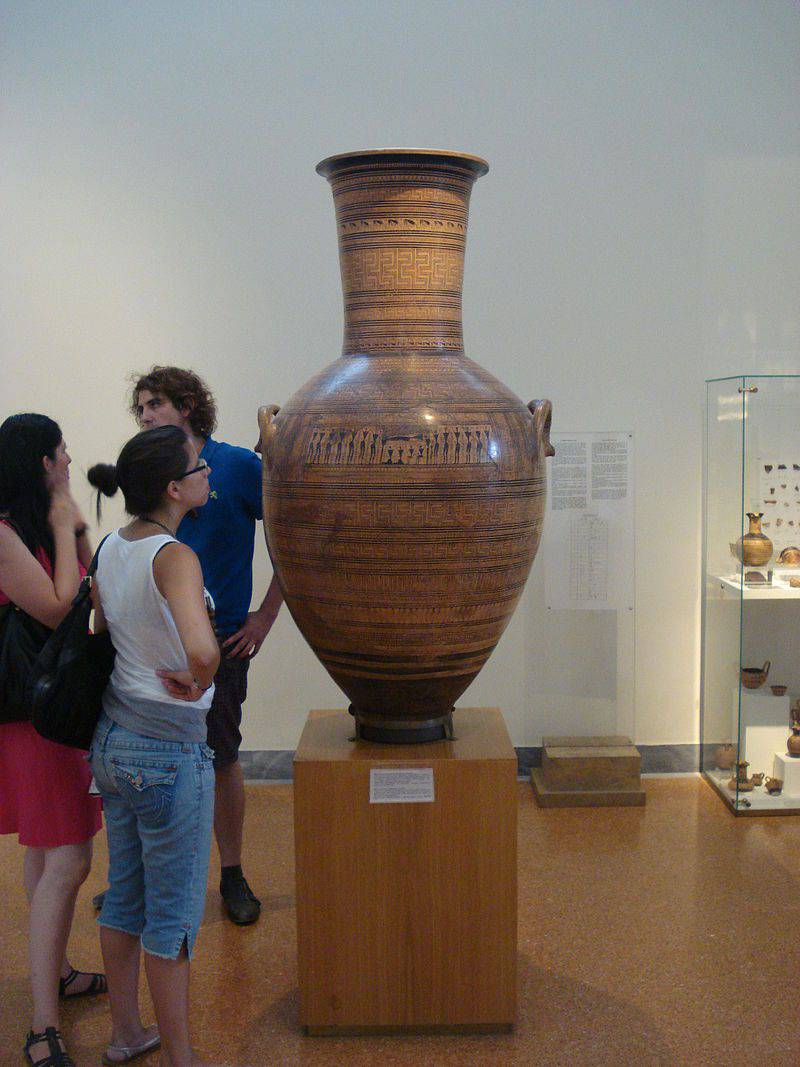 Pottery, made especially carefully, sacrificed to the temples or gave to the dead. Well, and these products themselves, having undergone a strong roasting, became very resistant to environmental influences, so that the intact ceramic vessels and their fragments survived so much that the count goes on literally tens of thousands! Even now they are not stored, they are simply thrown away, retaining only the best samples. 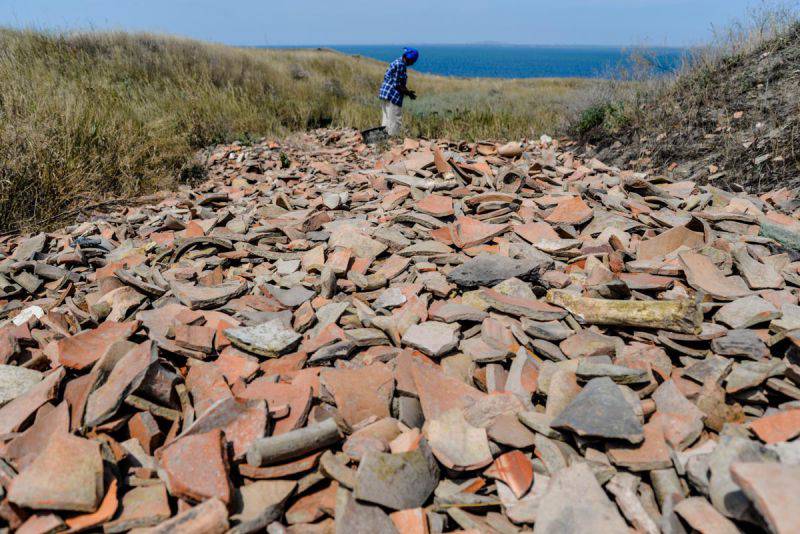 These shards are no longer needed. Dump excavation in the area of ​​ancient Hermonassa, Taman village.

Ceramic dishes in Greece appeared in the Cretan-Mycenaean era, and it was then that its impressive patterns were created, both in size and decoration. But ... on the dishes did not depict people! 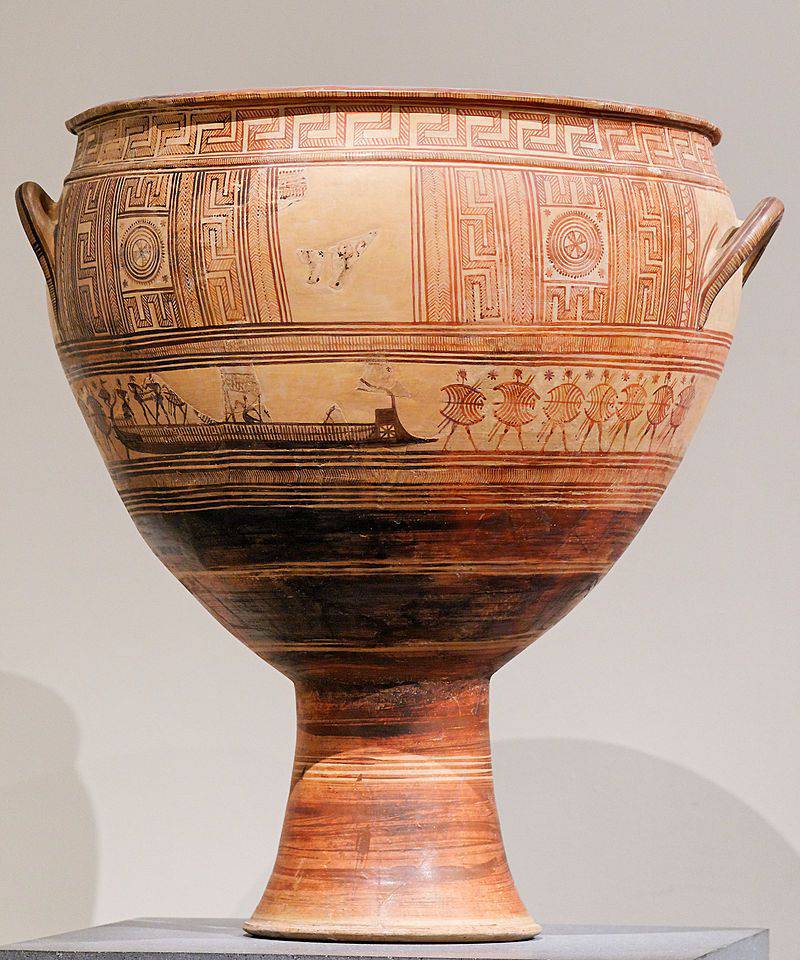 Dipilonsky crater with geometric patterns, the image of the ship and the soldiers with dipilonskim shields. Metropolitan Museum, New York. 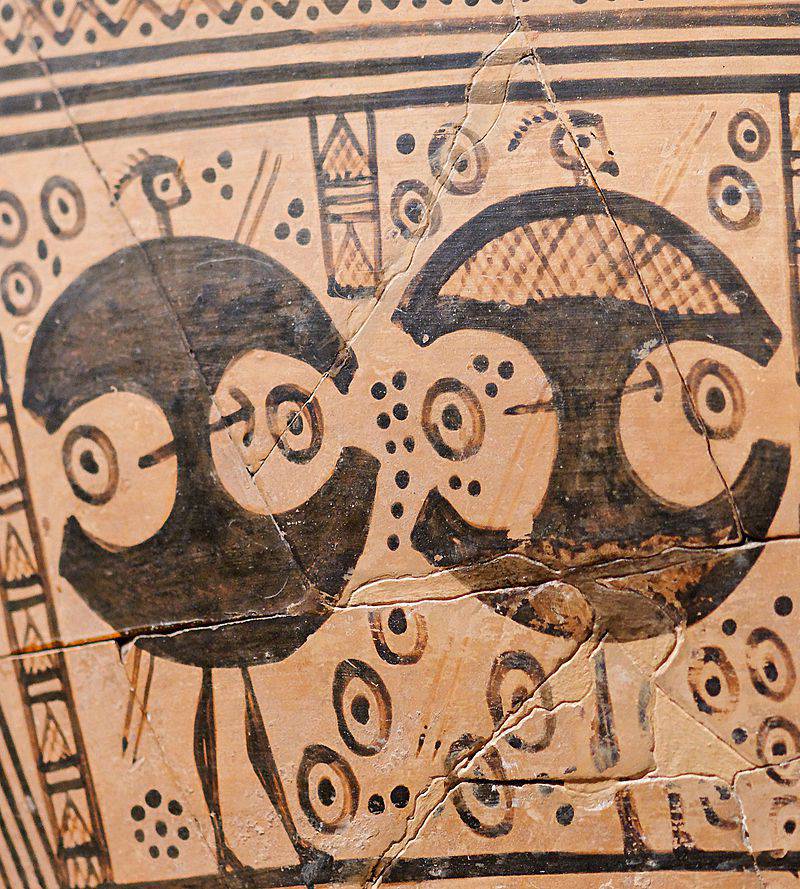 And the serf of Troy fell, the invasion of Dorian tribes took place, a period of dark ages about 250 years passed in Greece. And about the year around 750, the revival of Greek culture began. And it manifested itself in a very peculiar way. The Greeks began to make vessels, which later sacrificed the dead - they were found at the so-called Dipilon cemetery near the Dipilon gate in Athens, and therefore they were called “Dipilon ceramics” - decorated with a geometric pattern carefully traced in black lacquer. And although many of these vessels were of truly enormous size, they would have remained just examples of the new "geometric style" in the design of Greek ceramics, if not for one "but." 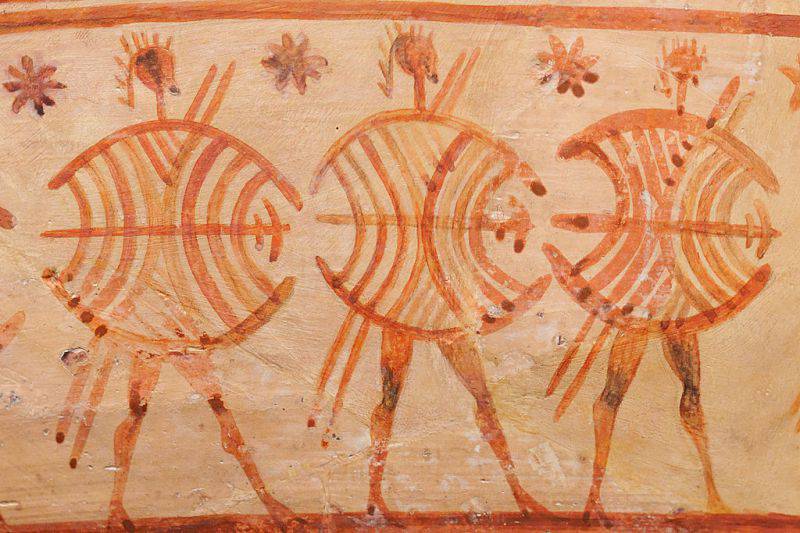 Detachment of soldiers from the "geometric vase". Each has a dipilonsky eight-shield and two spears. That is, spears were used for throwing. Around 800 - 775 BC. Metropolitan Museum.

The masters who painted them began to introduce into the elements of decor images of people, chariots and ships. So for today it is Dipilon ceramics (along with finds of other artifacts) that allows us to at least somehow imagine how the Greek ships, warriors and their chariots looked like then. That is, it is a very important iconographic source. 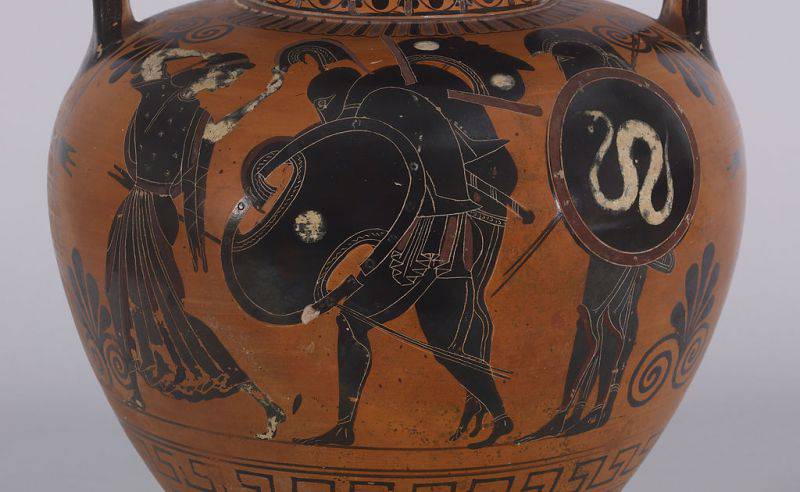 Artist Antimen. Ajax takes the dead Achilles. Again, we see the Dipilon shield, which once again speaks of their very wide distribution in the corresponding epoch. Not during the actual Trojan War. It's clear. And in the later, following the period of the "dark ages." Walters Art Museum.

Well, and then primitive drawings from dipilonian jugs gradually turned into beautiful drawings on amphorae, kilikah and other Greek dishes depicting the heroes of the Greek epic, scenes from life - a kind of everyday sketches, humor, scenes from theatrical productions - in a word - beautiful "photo The real life of the ancient Greeks. 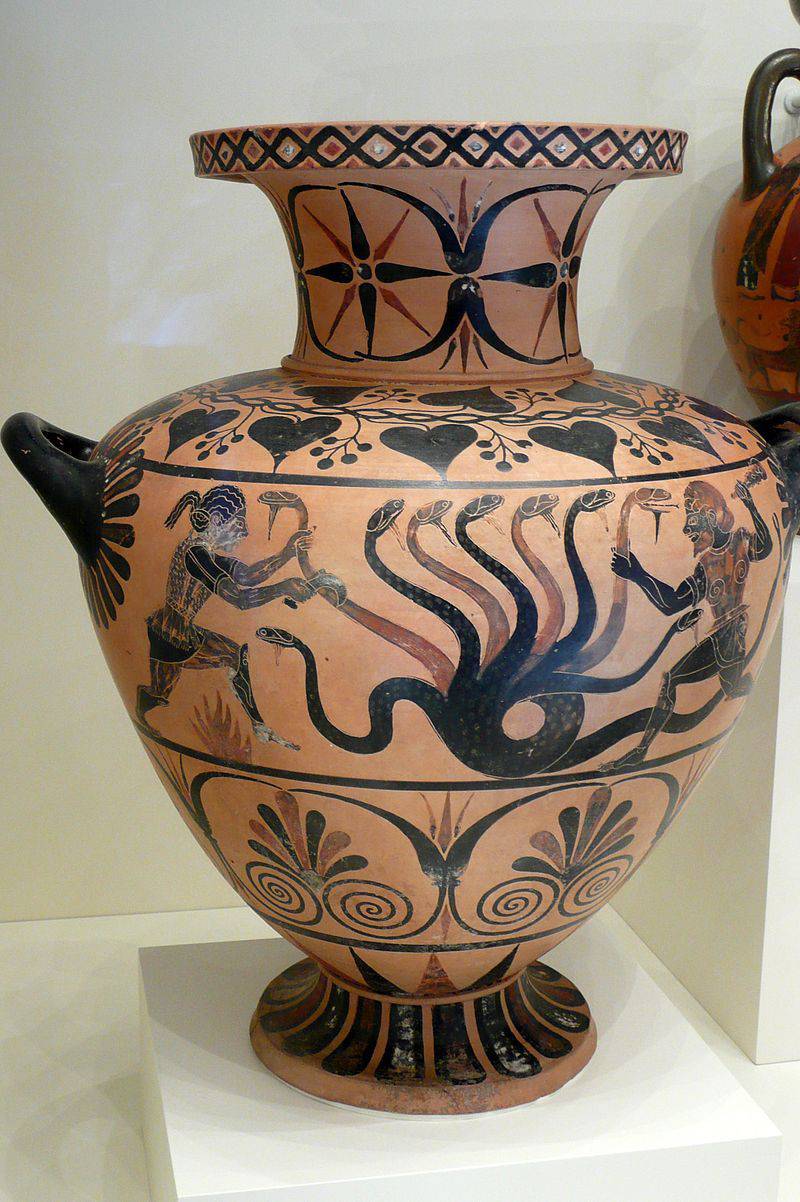 Hercules was a very popular hero among the Greeks, so he was portrayed very often. Here and on this Ettruse vase 525 BC. we see Hercules killing the Lernean hydra. He has a characteristic muscular breastplate and leggings! Paul Getty Museum, California.

And, by the way, it is the paintings on Greek ceramics that very much all the interesting things tell us about the military affairs of the Greeks. For example, archaeologists find a bronze helmet. But it is without a comb, the comb has not been preserved. And thanks to the pattern, let's say, on the amphora, we see, and how this comb could look, and even the features of its attachment. A perfectly preserved Corinthian helmet of the end of the 6th century, found in Sicily and exhibited today in Gliptotek in Munich, reached us. But ... only thanks to the Greek ceramics and, in particular, the drawing on the above crater and others like him, we can visualize how the Greeks decorated such helmets. And it also clearly shows how the warrior on the left puts on his leggings. By the way, it is called the “Euphron Crater” and is exhibited in the Metropolitan Museum in New York. 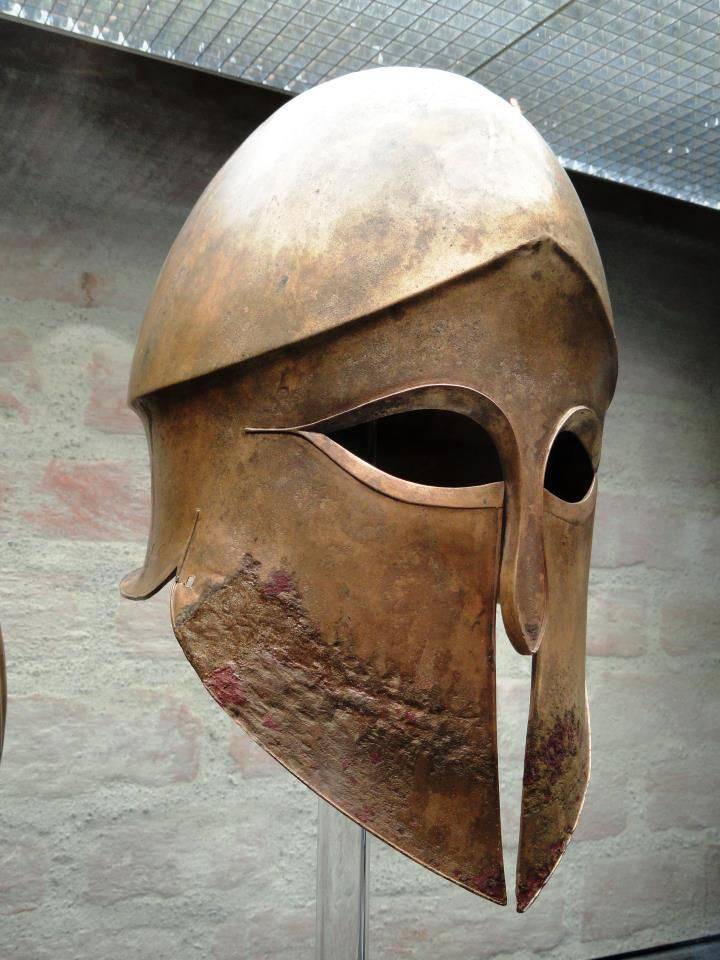 Corinthian helmet from Gliptotek in Munich. 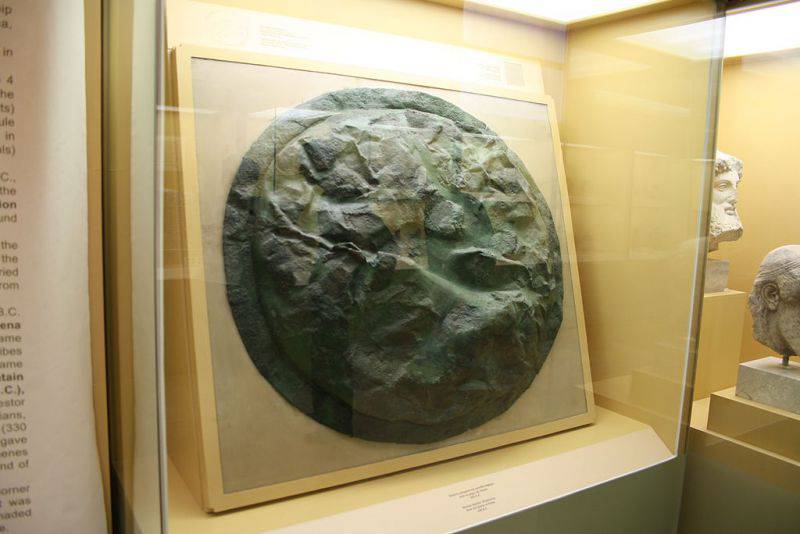 And here is the shield found by archaeologists. Well, what's left of it? Something is left, of course, and this “something” is quite enough to reconstruct it. But ... we do not know what we painted on these shields! And they would never have known if it were not for the Greek ceramics! And so, thanks to the images, we know for sure that the Greeks were much invented about painting their shields. They depicted both lion heads and the head of Medusa the Gorgon, a floating dolphin and a soaring crow, three running legs in the form of a swastika, a spiked club and much, much more. None of these "pendants" on the shield of the hoplites has reached us. Fabric (or leather) materials, in any case, fragile. But thanks to the images on the vases, we know that they were attached to the bottom of the shield and protected the legs. Arrows stuck in them and “extinguished” by free fastening this “curtain”.

Swords belonging to the hoplites, archaeologists find. But what they do not find? Do not find themselves wooden sheath from swords! Only shackles, rings, small parts. Meanwhile, it is in the drawings on Greek ceramics that both the sheath itself (their design) and the way the warrior wore them are clearly visible. 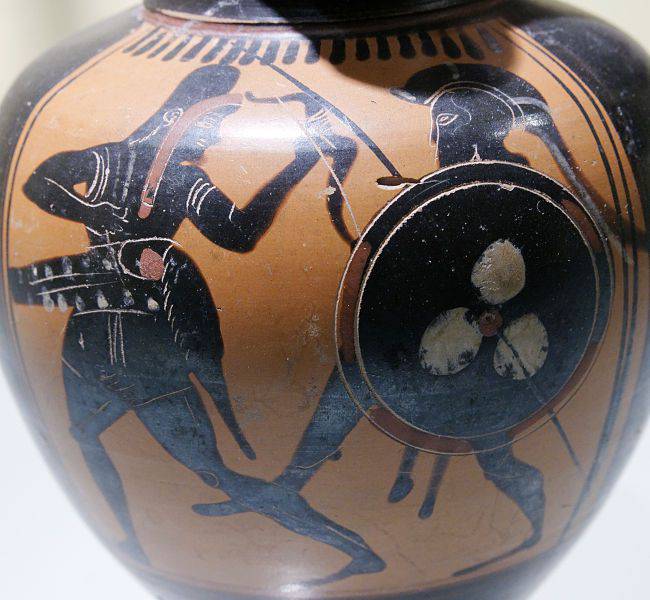 Thanks to the drawings on the ceramics, we know for sure that there were no Greek archers, at least in Athens. Archers were mercenaries from Scythia. Here and on this painting we see on the left a Scythian archer and a hoplite on the right. Around 520 - 510 BC er "Athenian artist." Museum of Fine Arts de Rennes. 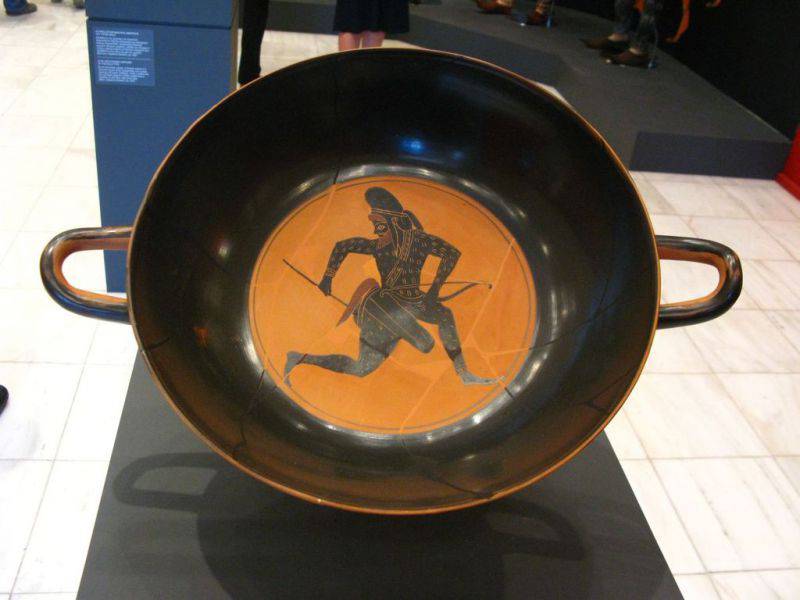 The armor of the Greeks was of two types: metal anatomical and linen, quilted. The latter had a very peculiar design of quilted (or glued) in several layers of strips of fabric, and at the same time was both flexible and rigid. Only anatomical metal shells reached our time, and everything is basically clear with them. But what about these so-called "flax shells"? How are they, for example, worn? Find out this from the findings of archaeologists is impossible. But ... you can look at the picture on the vase and see this shell itself, and the way the warrior puts on it. You can see their design, understand what and how it fastened the strings, that is, to get a complete picture of such armor.

The findings of archaeologists unequivocally say that the traditional weaponry of the Greek warrior - hoplite ("shield bearer" from the word hoplone - shield) was a helmet, armor for torso, shield and leggings to protect the legs below the knee and the knees themselves. Leggings are found, but for a long time it was not clear how exactly they were fixed on the leg. But thanks to the drawings on ceramic products, it became clear - no way! That is, there were no straps or straps. Leggings simply covered the legs and held onto it by friction and due to their anatomical shape. 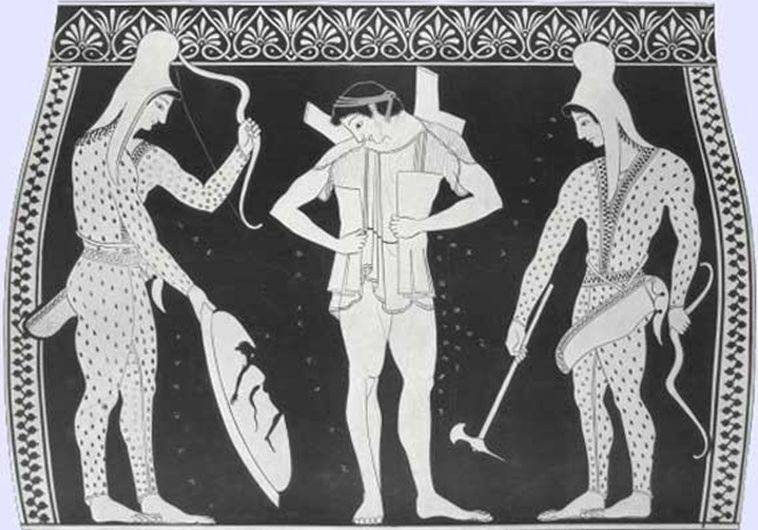 Artist Efimid. Hoplit puts on his armor, two Scythians help him. Around 510 - 500 BC er Drawing from a vase.

Many interesting things are told to us by Greek drawings on ceramic products. As you know, there were two main types: black-figured ceramics and red-figured ceramics. In the first case, the figures were painted with black lacquer against the background of red, burnt clay. In the second, the background was black, but the varnish-free figures are red. There were also bilingual vessels: half with black figures and a red background, and the other half with red figures. Red-figure vases first appeared around 530 BC. er It is believed that the painter Andokid used the technique of red-figure painting for the first time. And the fine bristles on unpainted figures, artists painted the smallest details on the images. There was a painting and on a white background. 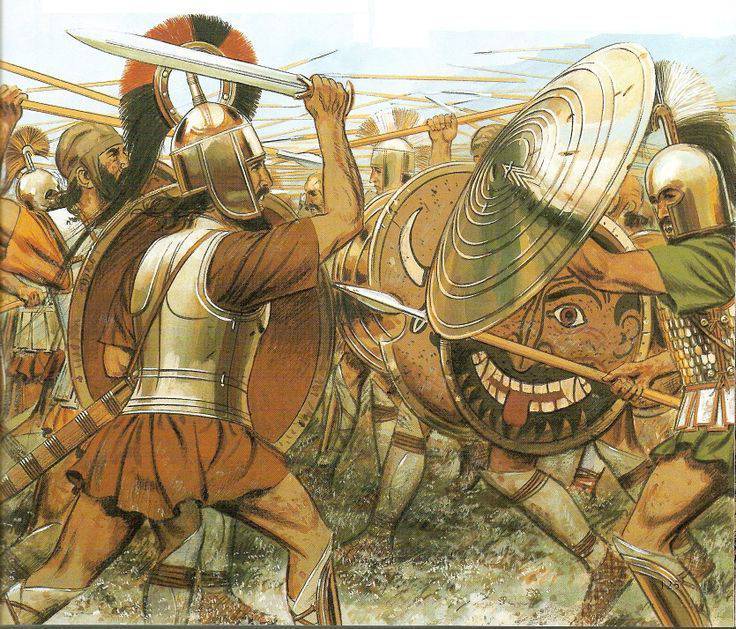 Greek hoplites of the “dark ages”. Figure by Peter Connolly.

As already noted, the products that have come down to us are thousands. Only in the area of ​​Athens more than 40000 and 20000 and more in southern Italy. The Greek masters who painted them usually signed their works, therefore we also received the names of their creators. But there are vessels, the names of the authors of drawings on which are unknown to us, but they can be determined by the manner of writing. They are given, for example, such names as "Berlin painter", "Athenian painter". There are “Cactus Painter”, “Camel Painter”, “Kolmar”, “Winchester” - so named after the museums where the collections of their works are collected. Famous names: Amasis, Andokid, Duris, Eufimides, Euphronius, Triptolemus, Hares, Execos. And, of course, that this is the most famous and famous, and so they simply ... do not count. After all, they worked for not one century, but centuries! 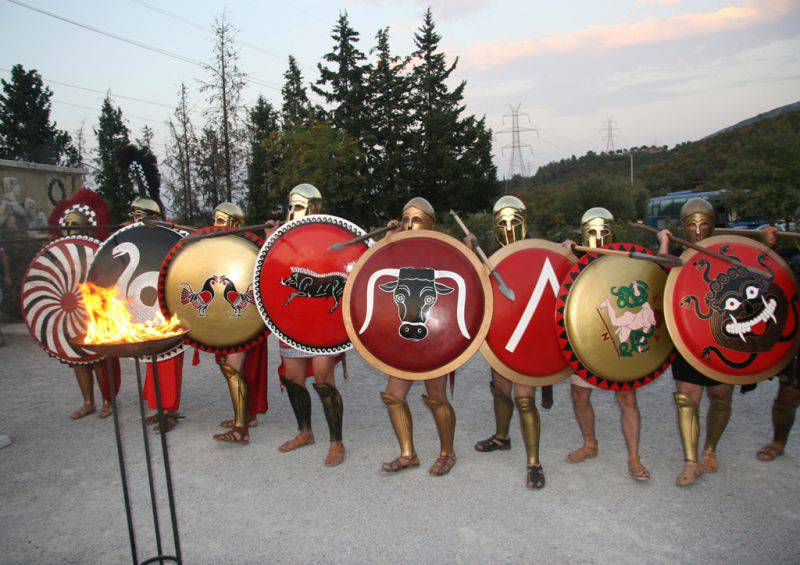 So the ancient Greek "vases" - this is the most important material that helps historians to study the military affairs of ancient Greece.

Ctrl Enter
Noticed oshЫbku Highlight text and press. Ctrl + Enter
We are
The castle of Saint Florentine: "the castle that was never besieged, and in which they live"Conwy Castle - the royal castle of the "iron ring" of Edward I.
7 comments
Information
Dear reader, to leave comments on the publication, you must to register.