Minsk against NATO: is it more important for Moscow, a business plan or an ally? 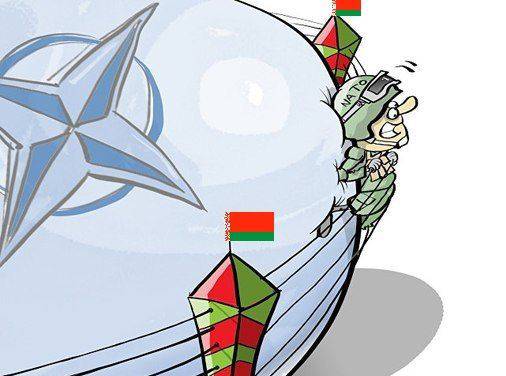 On the last day of 2015, President of the Russian Federation Vladimir Putin signed a new strategy for the country's national security. In it, the North Atlantic Alliance is called the main potential adversary of Russia, and the key threat to military security is the approach of NATO’s military infrastructure to the Russian borders.

This was a kind of response to the decision of US Secretary of Defense Ashton Carter to place 250 in Bulgaria, Estonia, Lithuania, Latvia, Poland, Romania, Germany tanks, self-propelled howitzers, infantry fighting vehicles and other equipment, as well as the fact that for two years now there has been a buildup of American military contingents in the Baltic states and an increase in the number of military equipment. At the same time, the US military-political leadership also calls on the allies to send their units to the Baltic countries, so that in each of them an international battalion is also formed.

Of course, a couple of battalions will not change the balance of power in the region, and they are more likely psychological support to the Baltic countries. However, apart from Lithuania, Latvia and Estonia, Poland has recently been very interested in increasing hostility in relations between Russia and the West, which hopes to obtain an important status of a “front-line state” in the framework of a new confrontation. To this end, Warsaw even made the decision to deploy three newly formed brigades of the National Guard on the eastern border, which carries with it a direct threat to the security of both Russia and Belarus.

Thus, significant strengthening of border areas is carried out near the western borders of the Union State of Russia and Belarus. Under these conditions, it would be the height of naivety to pretend that no one notices anything.

To counter these threats, coordinated activities of Minsk and Moscow are needed. The new Russian National Security Strategy involves the deployment of high-tech multifunctional military complexes on the borders of the Russian Federation with NATO countries.

However, not only Russia borders with the countries of the Alliance, the Republic of Belarus has an even greater length of borders in the western direction. And if the Russian Federation, in order to adequately respond to new threats in 2016, plans to create three divisions on its western borders, then the official Minsk does not have any forces for this.

One of the solutions could be the modernization of existing models of equipment, as well as the adoption of a new, modern weapons. Yes, to the best of their abilities, Belarus seeks to increase the combat capabilities of its Armed Forces - the specialists of the domestic military-industrial complex created new types of weapons, such as the MLRS “Polonez”, new missiles, radar stations, communications, intelligence and much more. However, in order to re-equip all units, again, it takes time and a significant amount of money. At the same time, this problem could be solved with the help of a strategic ally - the Russian Federation.

Moreover, in the near future, the C-300 air defense missile system, which has been purchased in Russia, will finally come into service with the anti-aircraft missile units of the Air Force and Air Defense Forces of Belarus. And although they will strengthen the air defense of the country, these complexes are no longer new weapons - the last C-300 for the Russian army was produced approximately in 1994 year. At the same time, probably, this batch of the air defense missile system can be considered a kind of success, because Moscow has long ignored the requests of its main ally for the supply of modern technology.

However, it should be noted that, as Russian partners assured earlier, the first foreign recipient of the newest air defense system C-400 "Triumph" was planned to be Belarus. This was obvious and explainable - the Unified Regional Air Defense System of the two countries covers a very important Western strategic direction for Russia.

However, China became the first recipient of C-400. Moreover, Belarus will not become the second buyer - the 10 divisions of the newest complex will go to India.

It turned out that in this case, for the Kremlin, money was more important than strategic partnership and assistance to the only ally covering the western direction! And this is an example concerning only air defense systems, and there are quite a lot of such spheres of virtual cooperation of an ally.
It sounds trite, but in the Russian business plan, rendering assistance to Belarus does not appear. Thus, Minsk turns out to be alone against a whole bloc of aggressively-minded countries and must rely only on its own forces.

It seems that the time has come to think about whether there is any sense from such a strategic partnership and what dividends Belarus receives from such cooperation militarily.

Ctrl Enter
Noticed oshЫbku Highlight text and press. Ctrl + Enter
We are
As NATO instructors in the territory of a military base in Estonia, trained Ukrainian nationalistsWhat you didn't want to know about England
196 comments
Information
Dear reader, to leave comments on the publication, you must to register.