January 23 2016
54
Integration processes in Europe have significantly increased in the wake of the collapse of the USSR and 7 in February 1992, in the city of Maastricht, an agreement was signed, which initiated the European Union. And now, after the 24 years, the EU is on the verge of collapse. Are these events random, a series of coincidences or someone's systematic work? And should we rub our hands and quite smile from the current processes in the EU? Let's see. 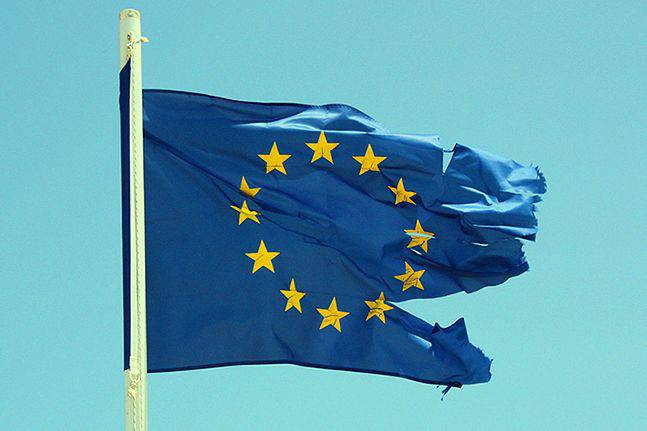 What is the EU? This economic and political union of 28 states, 19 countries introduced a common currency into circulation - the Euro. EU share in world GDP in 2013g. was 23,7%.

And now we will put some key questions:
1. Who benefits from the collapse of the EU in the form in which it exists and vice versa, who benefits from a strong European Union?
2. Is there an influx of refugees to Europe?
3. Who benefits from destabilization in Ukraine?
4. What is the purpose of American military bases in Europe?
5. Who interferes with whom economically in the international arena?

We will try to answer.
1. Is the disintegration of the EU profitable for Russia? Is the EU a geopolitical enemy? - NOT. It is profitable for Russia to trade with the EU, solid currency is beneficial, a unified system of calculations and standards is beneficial, simplification of the visa regime is beneficial, and Schengen is beneficial. Yes, and these are our closest neighbors, with whom everything is intertwined with economic ties. It is beneficial for Russia to have a calm, reliable trading partner, and not only a trading partner, on many sides the points of view are the same.
Is the disintegration of the EU profitable for the USA? - YES. As a trade partner of the EU is not of interest to the United States, on the contrary, with a strong economy and a strong currency, the European Union is a threat to US corporations, competes with them, and deprives them of a monopoly. After all, it is known that the world is ruled by economic elites, and politics is just a tool of these elites, and wars are a means to achieve a goal if the policy does not work.
2. By all indications, it is clear that this is a carefully planned long-term US action, and not just a coincidence. What is the benefit of a war in the Middle East of the EU? - absolutely nothing. Firstly, the destabilization of the situation under the side, in the second influx of refugees, in the third the closure of the Middle East market for European companies. For the same reasons, war is beneficial for the United States. The goals are obvious ... After creating al-Qaeda, reborn in ISIS, the Americans destabilized the entire Middle East, occupied Iraq, strengthened their presence in the region under the pretext of fighting terrorism, and in fact selling weapons right and left, trying to control oil flows, sent a stream of refugees to the EU. Well, you do not need a strong and independent Europe, with a fully self-sufficient economy and making independent decisions, it is better to have disjointed puppet states. Why are Americans so aggressively promoting the sanctions regime? Sanctions primarily hit Europe, undermining its economy and of a plus side effect - create trouble for Russia.
3. Ukraine is another field of activity of the US State Department. Targets and goals? All the same. Destabilization in the EU, a reason to impose sanctions that will harm both the EU and Russia, it is possible to draw Russia into a local war, to gain a foothold in the region, to have a puppet, controlled state. Well, plus the market for junk, no longer driving and not shooting.
4. Here the question is also interesting. On the one hand, this is the legacy of the Cold War (there was no EU then), and on the other, one more knight's move. First of all, to keep some contingent near the borders of the geopolitical adversary - Russia, and secondly, to keep Europe under control, if you suddenly assume that the states will come out of obedience one by one. As for Russia, this is purely conditional, all these bases can be destroyed with one planned strike, and the Americans know this, and the transfer of troops will take a lot of time, and they will not fight in the open with a strong opponent, they will bomb the defenseless. There remains one main goal - to keep Europe in obedience, if that ... NATO? In its current form, this is simply an opportunity to siphon money from the budgets of other countries.
5. Strangely enough, no one interferes with anyone, on the contrary, trade relations are developing, integration processes are underway ... No one and no one, and all Americans interfere. They do not admit the thought of a multipolar world: the EU, Russia, China, the Middle East, do not admit the thought of strong non-controlled currencies (euro, golden yuan), strong states. Everywhere or shat or try.

Well, let's summarize. If what goes on now continues, the EU, in the form in which it has been in the last 20 years, will cease to exist, a serious confusion will be achieved in Europe, if not complete chaos. Should we be happy about this? Let everyone decide for himself what is best: a reliable and strong neighbor or a powder keg. Personally, I divide the West into two categories: the United States and the states under control, which do not have a voice, and not a kind of coalition advocating a united front.

Ctrl Enter
Noticed a mistake Highlight text and press. Ctrl + Enter
We are
A great interview with Sergey Lavrov: about Ukraine, Obama and IranPutin and Stalin. Comparative analysis
54 comments
Information
Dear reader, to leave comments on the publication, you must to register.