January 23 2016
23
The fighting units of the Tatar-Mongols had to overcome waterless steppes, forests and rivers. The way of crossing the water obstacles was very interesting. Here is what Plano Carpini writes in "History Tartarus":


"When they get to the rivers, they cross over them, even if they are large, as follows: the more notable have a round and smooth skin, on the surface of which they make frequent handles around which they insert a rope and tie it up so that they form generally a kind of round bag, which is filled with dresses and other property, and is very tightly tied; after that, saddles and other more rigid objects are placed in the middle; people also sit in the middle. And this ship, thus prepared, they bind to the tail of the horse and make the man swim forward, on a par with the horse, who manages the horse. Or sometimes they take two oars, row them across the water and thus cross the river, horses are driven into the kin, and one person swims next to the horse, which controls, all the other horses follow. that and thus crossed through the waters and large rivers. Other poorer ones have a leather purse firmly sewn; everyone must have it. In this purse, or in this bag, they put a dress and all their belongings, tie this bag very tightly at the top, hang a horse on its tail and forward it, as stated above. ”

In the melee the Tatar-Mongols used maces, tassels and axes. One form of Tatar maces was borrowed by Europeans and Muslims from the East, becoming very popular. It was called Pernach, and its upper part consisted of blades (“feathers”) of a different shape coming out of the sleeve. The tops of the mace were forged from iron, cast in bronze and even iron. Over time, such forms of mace, richly decorated, began to serve as a sign of power. Spears are also widely used, especially in heavy cavalry. In the ancient Turkic language there is the concept of "fight" and it meant literally "to fight with spears." The main tips of the copies were three types: armor-piercing peaks with a long narrow three or four-edged tip; a spear with a universal lanceolate point; powerful spear with a diamond-shaped wide tip. In addition to these main copies with these tips Tatar-Mongols used a spear with a hook on the sleeve. They wounded and hitched horsemen, dragging them to the ground. Such a hook was borrowed from churchen. 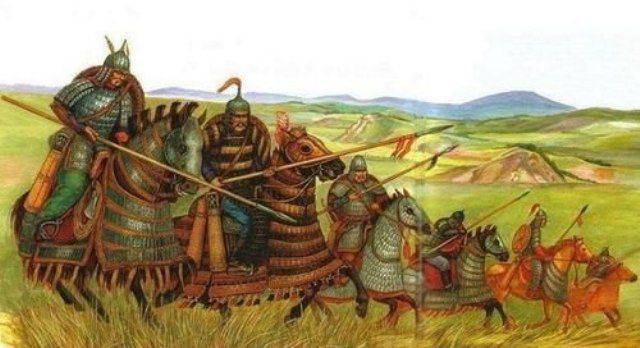 And the most honorable weapons Melee was dlinnoklinkovyh weapons such as a sword, broadsword, saber. The most popular was the broadsword. At first it was made with a straight, single-edged blade, but then acquired its classic look, more curved, with several lobes and elmans — an extension on the butt at a distance from the end of about 1,5 of the total length of the blade.

Crimean Tatar saber covered with silver, with engraving and niello. Accessories Turkish work. The first half of the XVII century. (private collection)

According to contemporaries, the Tatar-Mongols did not like to engage in close battle with the enemy. But when they did, they acted assertively and bravely. Every nation had its desperate brave men, among the Tatars they were called rich, Josaphat Barbaro noted: 

“Military people are supremely brave and courageous, and so much so that some of them, with particularly distinguished qualities, are called“ Talubagater ”, which means mad brave man. Such a nickname is born in the people, just as we have "wise" or "beautiful", which is why they say - Peter is so and so, nicknamed "The Sage", or Pavel so and so, nicknamed "The Handsome Man." These heroes have one advantage: whatever they do, even if it is to a certain extent beyond common sense, is considered correct, because since it is done because of courage, then it seems to everyone that the heroes are simply engaged in their trade. Among them there are many who, in cases of military clashes, do not value life, do not fear danger, but rush forward and, without hesitation, beat the enemies, so that even the timid ones get inspired and become brave men. Their nickname seems to me very appropriate, because I do not imagine a brave man who would not be mad. Isn't it a madness in your opinion when one dares to fight against four? Isn't it crazy when someone with one knife is ready to fight with many, and even armed swords? ” (Barbaro I. Journey to Tanu. Text reproduced from: Barbaro and Kantarini on Russia. Moscow: Nauka, 1971.)

The advance of the Tatar-Mongols to the West led to the spread of information about explosives and primitive artillery used by China. This stimulated the borrowing and development of similar developments in European countries. According to T. Ollson, the "chief architect" of the Tatar artillery was Ambughai from the clan Barguts. In tsz. 122 "Yuan Shi" states: “Ambughai, together with his father Bohochu, servant of Chyngyz Khan, went hiking and had merits. Once the emperor asked him: “What enters first into the besieged cities and enemy territory - warriors or weapons of war?” Ambughai replied with a saying: “In the besieged cities, first they use a catapult, throwing cores, because they are terrible, heavy and have a large radius of action”.

After that, Chyngyz Khan made Ambuguia a confidant in the management of the catapult masters, who chose 500 men and trained them. The Chinese technology of using siege weapons consisted in the fact that several dozen people were tugging at the ropes, which served as a lever for throwing projectiles. Catapults, depending on the size and characteristics of the design, the number of service personnel could throw stones weighing several tens of kilograms on 100 — 150 meters. After Chyngyz Khan took Samarkand, his engineers were able to improve the catapult and the range of the stones was 300 meters. Over time, the Tatar-Mongols also used ballistae, and from Jurchen they adopted the powder charges, which were placed in jars. In addition, they used the Greek fire, vessels filled with oil with tar or quicklime. At the bottom of the Takashima Gulf, the remains of the ships of Chyngyz Khan's grandson - Kublai Khan were found, which were sent to capture Japan in the 13th century. Namely, in the 1274 year, the first attempt at capture was made on 900 ships. But “Divine Wind” did not allow the plans of the Tatar-Mongols to be realized, the 200 ships sank, and up to 13 thousand people died. Weapons and hollow ceramic bomb shells were found in the boxes at the bottom.

The inventors of such bombs were Koreans. The shells were not only ceramic, but also cast iron.

The Tatars came up with the smoke screen to hide maneuvers on the battlefield. Smoke and fire also served as a means of psychological intimidation of the enemy. Incendiary means were widely used in the siege of cities. In the Mongolian chronicles, written by the Chinese, there is a legend about how the Mongols tried to set fire to the besieged city, sending many birds to it, to whose tails burning cotton wool or wick was attached.

In 1240 — 1241 from the Tatars, the Europeans learned about the possibilities of gunpowder. In contrast to the Arabs and Europeans, the Tatar-Mongols thoughtlessly reacted to the invention of the Chinese artillery guns. Shells equipped with grapeshot were particularly effective against cavalry. In the 14th century, it was during this period that the Golden Horde state began to be divided into small Tatar states, which made it easier for opponents to seize territory and defeat Tatar troops with modern weapons. As a result of the loss of military superiority began the decline of the last of the states - the Golden Horde, formed on the basis of the greatest empire of the world - the empire of Chyngyz Khan.

Sources:
Petrov A.M. The Great Silk Road: about the simplest, but little known. M .: Eastern literature, Russian Academy of Sciences, 1995.
Rubruk G. Journey to the Eastern Countries of Wilhelm de Rubruk in the Summer of Goodness 1253. Translation by A.I. Maleina.
Plano-Carpini, John de. The history of the Mongols. Per. A.I. Maleina. SPb., 1911.
Kradin N.N., Skrynnikova T.D. Empire of Genghis Khan. M .: Eastern literature, 2006.
Enikeev G.R., Kitabchi S., Heritage of the Tatars. What and why hid from us from the history of the Fatherland. M .: Algorithm, 2015.
Barbaro I. Journey to Tanu. Text reproduced from: Barbaro and Kantarini on Russia. M .: Science, 1971.

Ctrl Enter
Noticed oshЫbku Highlight text and press. Ctrl + Enter
We are
“White” and “colored” armor ... (part one)Russian allies of Mongolo-Tatars
23 comments
Information
Dear reader, to leave comments on the publication, you must to register.