Thanks to the sanctions - goodbye, SWIFT! ..

January 20 2016
154
You do not get tired of repeating: thank you very much, you are our Western "partners" for your anti-Russian sanctions. After all, often you simply wonder how the sanctions packages, which must have been stretched over a head of a certain kind to Russian officials, forced these same officials to move and switch to relatively effective work. New day - new information about the movement of stakeholders. This time we are talking about big Russian business, which at one time was clearly frightened by the threats of Western "friends" willing to disconnect the Russian banking sector from the payment system Society for Worldwide Interbank Financial Telecommunications (SWIFT). 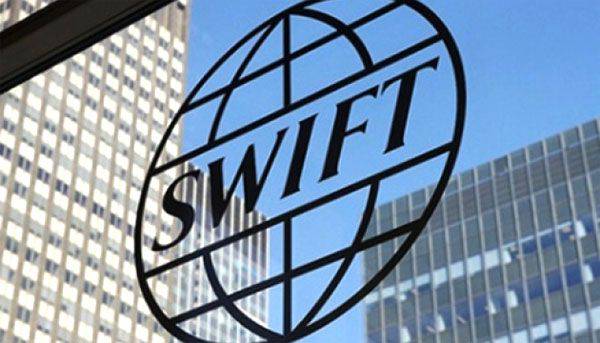 To begin with, it is worth recalling that in 2014, the idea of ​​Western “partners” for bringing Russian banks outside of the SWIFT system, which is not only an international platform for making payments, but also an information exchange field, sounded as one of the components of the anti-Russian economic sanctions package. between different banks. In Brussels, where the main office of SWIFT is located, they said that disconnecting Russia from the system "would allow an irreparable blow to the Russian economy." If such a shutdown took place, the Russian economy would really be under serious blow. The banking sector, which recently turned out to be tied to SWIFT, could lose a lot, and such losses would lead to a whole series of irreversible consequences for all sectors of the economy of the Russian Federation without exception.

However, neither in 2014, nor in 2015 did they dare to disconnect Russia from the international system of interbank information exchange and payment transactions. Why? Yes, simply because by that time Russian banks had already entered the system of global economic activity, and such a shutdown would have hit a huge number of foreign banks and companies that cooperate with Russia in one way or another. Western “partners” did not beat on their own heads, but they gave Russian bankers a reason to reflect on the fact that the position of Russian banks in this very global system is very precarious. And it is shaky in the first place because Russia does not have its own (protected from the sanctions urges) platform for exchanging information between banks and making interbank payments of various kinds, including access to foreign financial organizations.

Now Bank of Russia (also known as the Central Bank) announces that in the 2015 year, the Russian equivalent of SWIFT, called the Financial Reporting Service (SPFS), has gained momentum. What revolutions are we talking about?

If you believe the statistics of the Central Bank, then before the start of 2015, the system actually worked in test mode. By January, 2015 had decided to connect to the SPFS near 90 banks, whose management decided that it would be better to find an alternative SWIFT option earlier than to face the actual blocking of financial transactions. According to the newspaper "News", referring to the same Central Bank of the Russian Federation, the number of banks that connected to the SPFS by January 2016 of the year reached the value in the 330 financial and credit organizations. This is about 46% of the total banking sector in Russia. The process of connecting Russian banks to the domestic alternative to SWIFT is actively continuing.

How serious is SPFS today an alternative to the international system? Society for Worldwide Interbank Financial Telecommunications? Of course, it’s still far from global scale, if only because SWIFT services more than 10 thousands of financial institutions around the world. The scale of SPFS is much more modest. But here you need to understand that the SWIFT system this year marks the 43 of the year, and the SPFS is at a very tender age. However, despite its infancy, the Russian financial messaging service has already achieved some success not only within Russia. Now there are intergovernmental contacts through the BRICS, which in a short time can lead to the release of the Russian SPFS to the global market.

At the same time, the emergence and development of the Russian SPFS sends, as they say, far and for a long time the American system of so-called monitoring of international financial activity. The point is that after the September 11 2001 attacks in the United States, American “special structures” gained access to all types of SWIFT activities under the pretext of tracking terrorist financing through various banks. It just so happened that the “special structures” stubbornly did not notice the financing of international terrorism by the States themselves, but on a permanent basis, people (most often foreign citizens) were caught in various countries of the world who could be accused of either corruption crimes or links to terrorists or in trade weapons. And it would be fine if such work was carried out within the framework of the rule of law, but often arrests were carried out in third countries by such methods, the most democratic of which was the bag method on the head and the subsequent transfer of the detainee to one of the special suits - often without trial or investigation .. .

Yes, disconnecting Russian banks from SWIFT would not paralyze the country's financial system completely (for example, Iran was under sanctions for a long time showed that, in principle, it is possible to live without SWIFT), but it would lead to a number of negative consequences, up to a serious difficulty financial calculations for large contracts (exaggerated: they would carry cash in bags ...). But when a country has both its own payment system and a financial messaging service, this is not just part of the guarantee of the banking sector, but also the state’s entry to a qualitatively new level in the service of individuals and legal entities. In the end, this is a new element in the foundation of the country's financial security.

It would not be superfluous to say once again: thanks for the sanctions, "partners"!