January 18 2016
49
The United States does not tire of portraying Russia as a source of world threat and thinking about how to “stop” Putin. However, analysts say that none of the potential US presidential candidates have any sensible ideas about the stop for Putin. Even the super popular billionaire D. Trump has no recipes, and he stopped talking about getting along with Putin and started talking about his “good relationship” ... with God. Indeed, something went wrong in the American kingdom, because even in the Washington Times, which can’t be called Putin’s mouthpiece, the White House and the US military-industrial complex are called militant institutions that destroy freedom and inculcate terrorism. 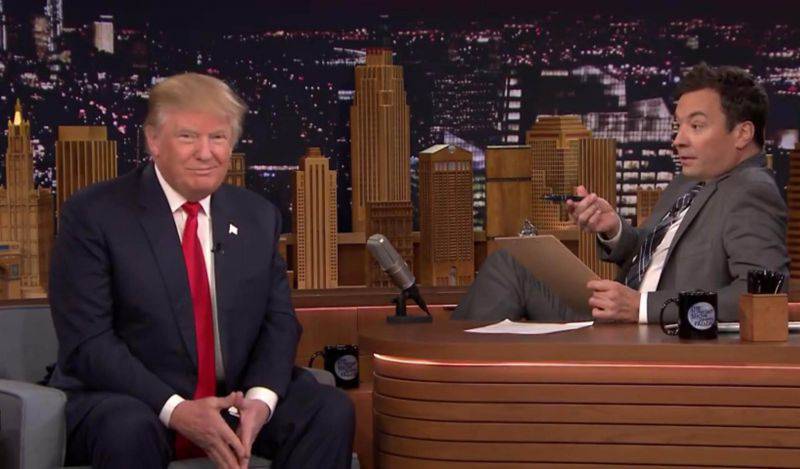 Jennifer Rubin in Washington Post suggested that among the many strategic mistakes made by the Obama administration, the wrong policy stands out in relation to Russia. For example, B.H. Obama approved the role of Russia as an intermediary in the conclusion of an agreement on the Syrian chemical arms. Hillary Clinton, the former US Secretary of State, welcomed this decision. And in this spirit continues to this day - worse and worse for the United States.

This policy doesn’t like America’s Eastern European allies, who are watching Washington “give up pieces of Europe and the Middle East to Vladimir Putin” (in the original: chunks of Europe). As a result, the aforementioned Putin has already ceased to fear that he will have to pay for the aggression. They are afraid of others. The journalist writes bluntly: "Obama is afraid of him (Putin) to resist."

However, not only Obama is so cowardly.

Donald Trump is ready to be a friend to Putin. The emergence of Putin's troops in Syria, Trump publicly rejoices.

Presidential candidate H. Clinton, the columnist also entered the ranks of Putinists: after all, she allowed Putin to press the "reset" button.

What to do to the White House?

According to Jennifer Rubin, the new US president must demonstrate strength and keep Putin "under control." In the meantime, the Russian leader continues to "oppress his own people" and even tries to return to the Middle East as a "powerful player." In order for America to become great again, it must not “curry” against “dictators” and “throwing friends”.

In the meantime, Mr. Trump has noticeably reduced the “Putin” glow of his campaign speeches. As a matter of fact, in his last speech to Putin there was no place at all. It seems to us that Trump acted wisely: the more often he says Putin’s name, the more voters in the election will look for Putin’s name in the voting machines.

The extravagant billionaire said in an interview with CNN that he now leads a righteous lifestyle. “Good relations”, as it turned out, he established not with Putin, but with God.

"I live a completely different life, not the kind that most likely many imagine," he quotes. "Lenta.ru". - I'm talking about the last years. I try to live right, and I can do it. I have a very good relationship with God. ”

However, this “divine” candidate, as well as former Secretary of State Clinton, turned out to be the objects of the poisonous criticism of the journal. "Counter Punch".

Publicist Brian Lafly made fun of Hillary Clinton, who herself doesn’t know what she says when she declares: “The United States should do more to resist Russian President Putin,” since his “decisive policy” everywhere contradicts “American interests.” She believes that the US should "make concerted efforts" to deter Moscow. Last year, she told the British politician Boris Johnson that the Europeans were “too weak-minded in the fight against Putin” and said that if Putin continued to “expand his domination” completely and uncontrollably, he would recreate the Soviet Union. In addition, according to Clinton, the elimination of President Bashar al-Assad from power in Syria should be a "top priority". Presumably, the journalist notes, this lady set out to “eliminate” Assad in the same way as Gaddafi in Libya. Under the giggles.

“Maybe she prepared the same thing for President Putin?” The author asks.

If Clinton becomes president, the journalist continues, the confrontation with Russia will gain momentum.

US Republican presidential candidates from the Republican Party are no better.

Carly Fiorina is ready for the "restoration of the Sixth fleet”And“ the restoration of the missile defense program in Poland ”, and she also wants to“ regularly conduct aggressive military exercises in the Baltic countries ”. Then she will send "several thousand soldiers to Germany." She has nothing to talk with people like Putin.

Senator Marco Rubio spoke even more simply: “I have never met Vladimir Putin, but I know enough about him to say: he is a gangster.”

Jeb Bush claims that “without American leadership in the world, any other country in the region [in the Middle East] is beginning to change its priorities.” It is sad, he believes, that "already Iraq and other countries are now negotiating with Russia." “Not so long ago, Russia had no influence in the region at all,” he recalled. Not Russia, but the United States "must lead in all directions."

Finally, Donald Trump. Its author calls the "grotesque figure of the sinister comedy." Hard to believe, believes the journalist that Trump is in his right mind. No, this is an “obvious madman,” but it constitutes the most serious competition to all other Republican candidates. This type believes that you should act "together with the president of Russia."

Such a position of Trump is presented to the author as “evil joke”. In his opinion, there is no difference at all who will be the next president of the United States, Trump's “evil prankster” or Clinton’s “poisonous and vicious”. In any case, the planet will continue to observe "the continuation of uncompromising pressure on Russia," up to the growing threat of "military confrontation."

The author advises the US ruling circles to "listen" to what President Putin said at a meeting of the UN General Assembly last September. Brian Lafley is convinced that Washington continues a policy based on self-conceit and belief in its own exclusivity - with complete impunity. This policy was carried out before. The US is not going to stop. Each of the likely candidates for the presidency of the United States "believes" in this policy, "built on conceit, exclusivity and impunity." It appears that the future president of the United States will launch aggressive actions against Russia. The consequences of the confrontation may well lead to a total catastrophe.

Bruce Fain writes: “All empires are the same. All of them are born from the DNA of those species that crave power for the sake of power. And this evil remains unchanged from the time of Adam and Eve. ”

In its development, the United States, the author believes, "predictably followed" the model of ancient Rome.

First, the Americans fought against the British (in self-defense). Later, they fought on the side of the Allies in the First World War. Then, in the same XX century, they "invented their allies" and rushed to defend them. So it was, for example, in Vietnam, Kuwait or Somalia. And since then the war began, which has no end to the edge. And its goal is not a victory over international terrorism.

“The American Empire,” the journalist writes, refuses to admit the fact that the endless foreign interventions of the United States created a host of enemies for America.

Bruce Fain gives advice to the White House. "The United States," he writes, "will become much freer, richer and safer if they withdraw all their troops from the Middle East and deploy them in their homeland to protect their own borders, shores and sky."

“Our militant state,” the publicist continues, “has nurtured the military-industrial-terrorist complex and in turn is fed by them, is a great destroyer of freedom.” And here are the fruits of this terrorist cohabitation: state supervision, national bankruptcy, secret government, disintegration of the constitutional system of checks and balances.

War for the sake of war, power for the sake of power - this is what today's United States is alive. Criticism of this state of affairs is increasingly appearing on the pages of American newspapers, including the major and non-“alternative” press. Some months remain before the presidential elections, and the voices of the disgruntled will be heard more and more often, becoming louder. However, will something change after the election? No, no. All the same “terrorist” military-industrial complex will dictate the rules of the game to the White House, as well as to the congressmen.

Ctrl Enter
Noticed oshЫbku Highlight text and press. Ctrl + Enter
We are
Get on or not get on - that is the question!Overseas ally? Donald Trump - US Presidential Candidate
Military Reviewin Yandex News
Military Reviewin Google News
49 comments
Information
Dear reader, to leave comments on the publication, you must to register.