January 21 2016
47
The division into different types of troops in the army, which began under Henry VIII, continued even after his death. At the beginning of the 17th century, the English historian C. Blair singled out six types of English warriors in armor and with weapons:


1. Heavy cavalry - wore three-quarter armor, D. Paddock and D. Edge, indicate that armor to mid-thigh - legguards - that is, semi-armor was primarily used by light middle cavalry, and heavy cavalry wore knightly full armament. K. Blair - “heavy cavalry wore boots instead of greaves,” and D. Paddock and D. Edge wore boots instead of knight sabatons, they also used closed helmets and knight's armor, but on the cuirass there was no hook for the hook. .

2. The average cavalry wore armor lighter in weight, and they combined with a burginot (or burgonet) helmet. 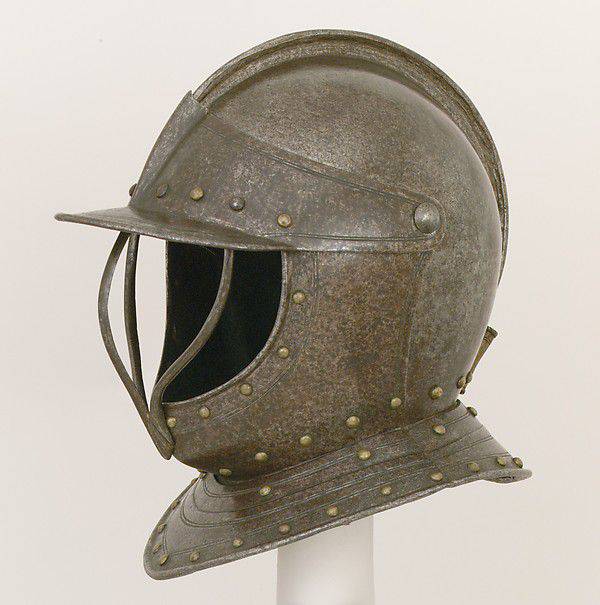 3. Light horsemen used firearms weapon and therefore included all those who could “shoot from a horse”, D. Paddock and D. Edge also include “javelinners” (“javelin” - dart) among them, therefore the phrase “dart armor”). Their protective weapons consisted of a breastplate, a burginot helmet, a lamellar skirt, and a horget. K. Blair describes the light cavalry armor differently. They have “Arquebus Armor”: a breastplate, a shoulder pad, a collar, a glove on the left hand to the elbow (“long glove” or “glove for reins”) and again burginot. Lightweight version - gloves, chain mail shirt and burginot again.

4. Musketeers and arquebusiers wore a leather jacket Jacques, and then after 1600, she was replaced by a buffalo leather jacket that withstood cuts with cold weapons, as well as a morion helmet. The musketeers later stopped using armor for protection, and instead of wearing helmets in civilian fashion, they began to wear a wide-brimmed hat.

5. "Armed spears" - infantry protected by armor. She stood in the ranks in the first ranks. She wore armor: cuirass, shoulder pads, gorget, gauntlets, handcuffs and a helmet morion.

Referring to the illustrations, in 1581 Mr. D. Pottinger and A. Norman indicate that Ireland used two types of English cavalry:

The heavily armed cavalry wore a cuirass, to the middle of the thigh - a thigh, hands were fully protected, and the helmet Morion had a comb and metal cheek pads that were tied with laces under the chin. They were armed with a heavy spear and sword.

The lightly-armed cavalry wore a chainmail shirt and, again, Morion, and boots (very tall with thick skin) on their feet, and heavy cavalry wore the same. Armed with a sword and light spear. For the protection used brigandine or Jacques.

Irish pikemen were protected by a cuirass, their hands were completely covered, Morion was covered with a crest, no legguards were worn, a long “Arab peak”, a short dagger and a heavy sword were in service.

The alebardists guarding the company flags had only cuirass and helmets, since it is not very convenient to use a protected armor to wave a halberd.

The protection of the arquebusier, like that of other infantrymen, included a Morion helmet; in addition to the main weapon, he also had a dagger and a sword. Drummers and trumpeters, whether in infantry or in cavalry, did not wear armor, cold weapons for self-defense.

The officers differed from the rank and file in the wealth of their equipment, and in a sign of high status they wore short spears. In the illustrations, the page boys carry convex round shields behind them. For a long time, such shields were used by the Spaniards, who believed that they helped break through into the building of pikemen, if they moved their peaks. Prince Moritz of Orange later armed his infantrymen in the first rank with bullet-proof shields, trying in such a way to provide protection from bullets from muskets.

The knight's spear (very heavy) by the year 1600 practically ceased to be used in battle, it was used at tournaments and that was all. The very same spear from the 20-ies of the XVII century was rarely used. The heavily armed rider was called the cuirassier (this is the main element of his equipment).

But the past was firmly seated in people's minds, and therefore English historian Peter Young in the 1976 year (300 years later after the described period) wrote that, allegedly, in the 1632 year, the English heavily armed horseman had the appearance of the same medieval knight, although he was "Improved." He lacked plate shoes, did not have a “skirt” - leggings, instead of them used plate covers for the legs (strengthened to the cuirass and protected the legs below the waist down to the knees). The rider's hands were also fully protected, and he was armed with a knight’s spear or a lightened counterpart (there were no extensions and a handle), a cavalry sword (very heavy) and a pair of wheeled pistols. 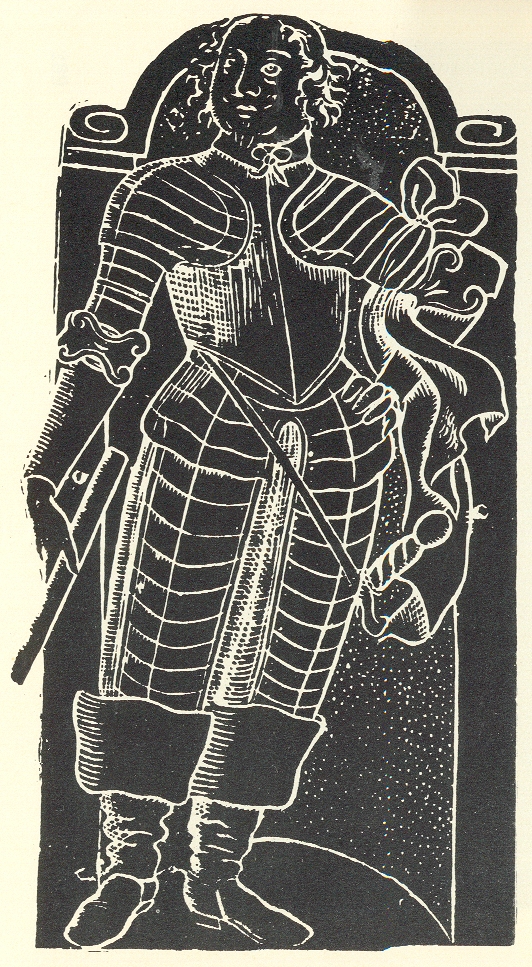 Gravestone bras from the grave of Ralph Aesheton 1650, Midleton, Yorkshire.

Even in abbreviated form, such armor often weighed more than it protected only from knives. It was all very hard to wear. The cuirassier armor is preserved, which weighed 42 kg, as well as the classic knight armor! These armor defended from bullets reliably enough, but at a certain distance, however, their weight was too great and sometimes with the fall of the rider from the saddle led to injuries. 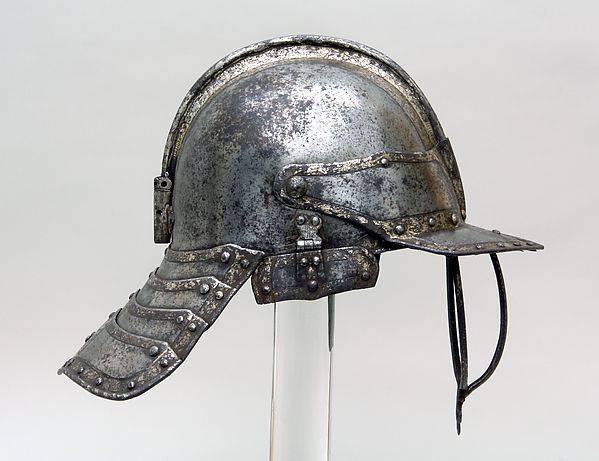 That is why, after the middle of the XVII, the English cavalry used heavily lightweight armor, which had nothing in common with the knight. "Knights" and "round-headed" horsemen of parliament wore a helmet called "sweat". Instead of a visor, an expanding noseplate was made, or an overlapping of metal bands. The cuirass covered the back and chest, the left arm to the elbow — handcuffed, below — the plate glove, and in the “cheap” army of parliament even this “excess” riders were deprived. Dragoons, musketeers, horse arquebusiers did not have protective armor (even the brave guardsmen of King Louis XIII). 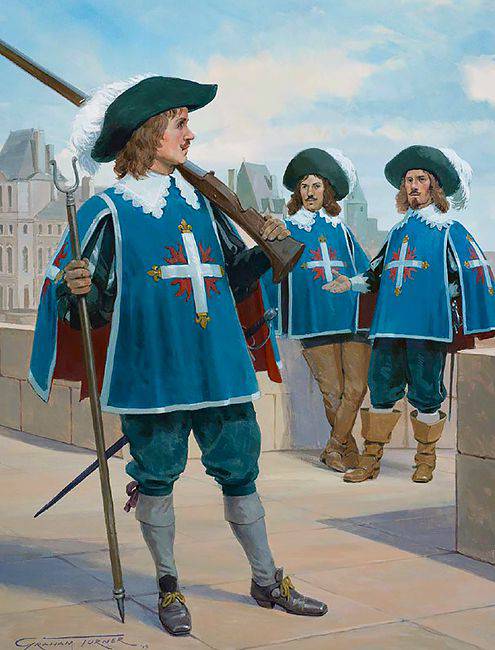 It can be said that the birth and development of European plate weaponry was completed already after the middle of the 17th century, and by the year 1700, and even more so. True, in combat practice, separate elements of armor were still used. Over a long period of time, weapons developed and, by 1649, the “traditional” form was defined: pikemen (infantry) - breastplate, legguards, helmet morion; musketeers (occasionally) - a helmet and only; cavalry - a breastplate and a helmet, (often only the front part of the cuirass) Pikemen could have gloves with leggings of thick leather, which could protect hands from splinters from the shaft of the pikes.

The changes affected in England and the armor for the nobility, made in the late XVI - early XVII centuries. After Italy, after the 1580 of the year, the “pea pod” (form of cuirass) was borrowed, but after 20 years, the “pea” was abandoned. The helmet could turn on gorget; The back and chest plates were made on rivets from separate strips, this provided for the owner of the armor good mobility. Masters to strengthen the armor added a whole-forged chest plate, which was fixed on top. Lamellar legguards attached directly to the cuirass. The gloves of the fingers were separated, they were protected by metal plates that went over each other. Chainmail shoes had metal noses. 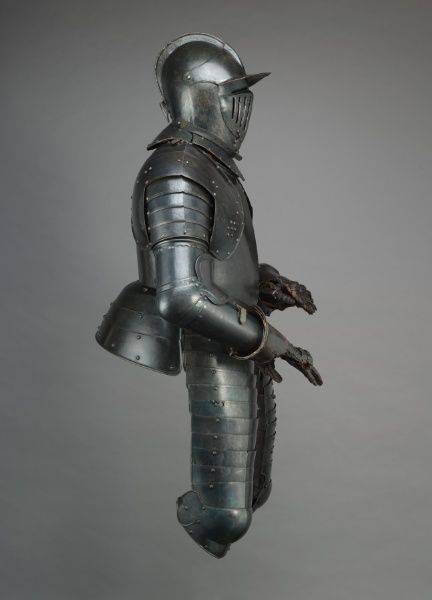 Cuirassier Lats of the end of the XVI century. Cleveland Museum of Art.

The development of the armor continued under Queen Elizabeth, but at the same time there were many various additional details: a chest plate, forearm buff, on the left side a special “guard” was worn on the arm and part of the armor (used for tournaments). Burguignot dressed with a buff that protected the neck and lower face. This armor was very expensive. Leggings became rougher and more massive, because they were put on over their boots, and they had to be even more spacious. Out of use in battle, they almost completely disappeared, as did the sabatons, but the leggings still dressed in armor. 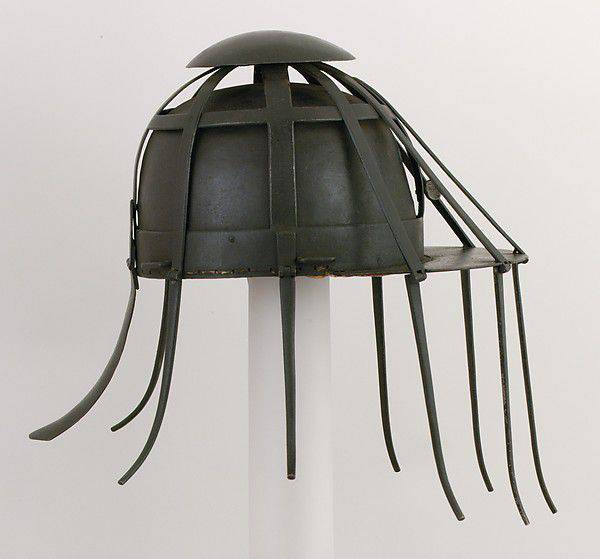 In France, King Henry IV decreed in 1604 to ban full knight armor. Later on, the English rider's 1620 of the year was a lattice made from rods of various kinds. And for the cuirassier helmet there was an Italian “dead head” - a special shape was taken with slots in the shape of a skull. 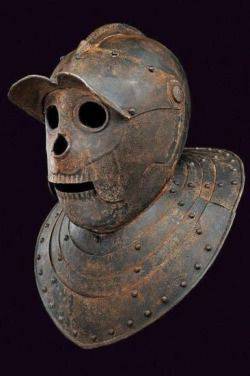 A helmet with such a “face” not only defended, but also scared!

A novelty was the helmet of the “gentleman” (he received distribution in 1642 - 1649 in England during the Civil War). He looked like a hat with a wide brim, she had a sliding bow. At the end of the 16th and 18th centuries, sappers wore special types of armor, because they had to work under enemy fire and were interested in protection more than other soldiers. Bulletproof helmets were a special kind of protection at the end of the era of the use of knight armor. They were made for commanders who watched siege operations from cover (no one wants to substitute their head for enemy shots).

Tombstone from the grave of Alexander Newton 1659, Brazeworth, Suffolk.